Monster Energy Kawasaki’s Chad Reed will take you on a lap of the San Diego track for this week’s Smith Optics Track Walk.

"That’s one thing I love about San Diego; it’s always the first football stadium that we go to of the year, which is a nice change of pace to get out of the baseball fields," begins Reed, who has won here five times since 2003. "This track normally has a really big start straight down the middle, and I think that’s the safest and fairest place to run the start. Everyone has the same opportunity, no matter where you start. So anywhere around the box is going to be a good spot." 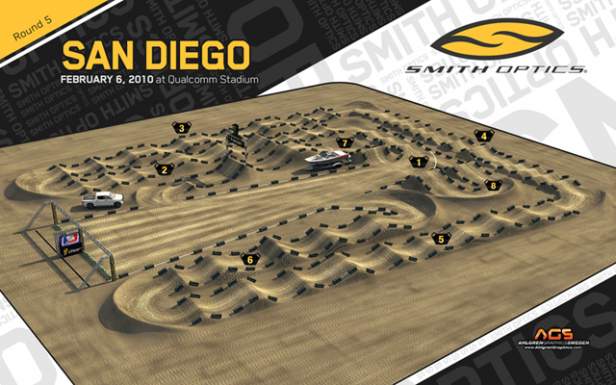 1 – After the start, you come down into a 90-degree turn into a single. It’s always hard to get 20 guys through there, so I’m sure there’ll be someone who pushes wide and loses the front end. On this, it looks like you’ll probably roll in and double out, so you could get to the outside.

3 – Out of this right-hander, I would believe you’re going to see a lot of guys triple onto the table, and then bounce off that onto the next table, then off over the single, and then go from the table and triple into the turn. An alternative line, which is really on the big, crazy side, would be tripling all the way over the table, and then go from table to table, which would be quite big, then step off onto the single. And then that gives you the opportunity to single into the turn, which is never optimal, but in this case it’s before the whoops, so you can kind of get wide, get the bike up a gear or two, and then get a great drive through the whoops.

4 – I don’t know if they’re going to space these whoops out and have a double in the middle, but it’s going to be important to get a good run through the first set, do the double, and then go into the last set. Depending on how big the double is, sometimes you could hit that and clear the rest of the whoops out, so that could end up being the fastest line. In the past, the whoops have always held up reasonably well in San Diego. It all depends on how much water they put into the track. Sometimes, when they water it a lot the whoops will get rutted out, but it just depends.
{LINKS}
5 – This right-hander will probably have a small berm, if any, because it’s exiting the whoops. So I think that’ll cause the 450 guys to go double-triple-triple-double.

6 – After the next right, you go into a pretty easy double-triple, then hit a big berm. You’ll then cross the start straight and get your signal from the mechanic, and then you’ve got two choices in the next turn—inside or outside. This section reminds me a lot of 2008. It was very similar. We came back down the start straight and then had an inside/outside berm before the finish line. It’ll all depend on how big the single is on the inside.

7 – You’ll just go over the finish, which is pretty cut and dry, but the next jump looks quite interesting. It looks similar to Houston last year when Windham built the track; he built the jump over the track, so it’ll be interested to see how big that gap is and how the jumps are built, whether that’s made to be a jump, or if it’ll be two walls.

8 – After that, you make a left and it looks like just a single jump out on to the flat, and then a triple into the turn. I don’t think you’ll be able to double into this section.