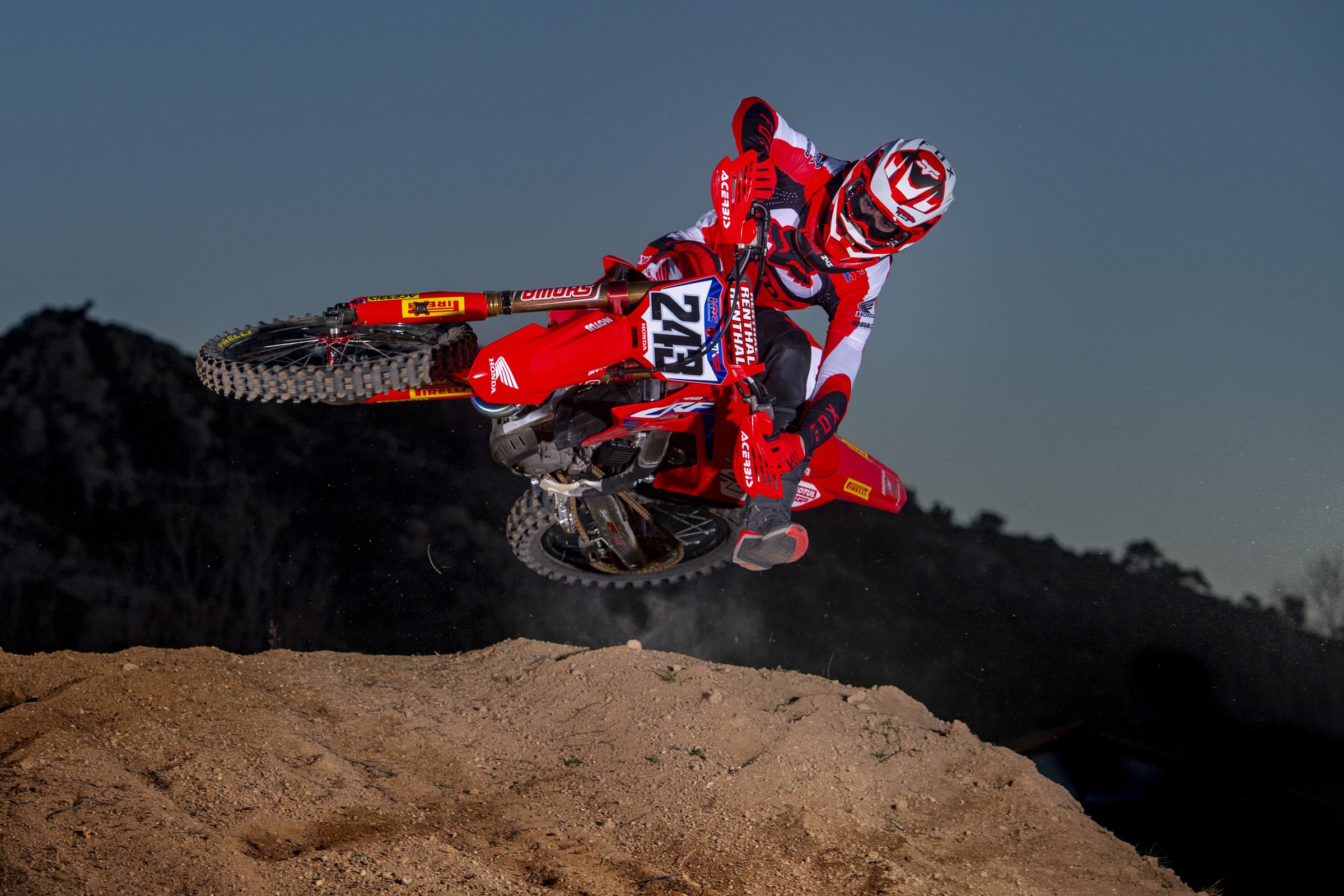 With a lot of moving parts in the offseason among all of the teams and their respective riders, we felt it best to offer a final refresher before the season opener on who went where and what each team looks like for both MXGP and MX2 in 2022.

The reigning MXGP World Champion was weeks away from rolling to the opening round with a big #1 on his bike (which hasn’t been done in the premier class since it became MX1/MXGP). However, Herlings crashed at a photoshoot for the Red Bull KTM team intro and broke his heel in the process. He quickly had surgery to repair the damage but Herlings himself has recently stated that he cannot even put pressure on his heel for six more weeks which puts him off the bike until at least the fifth round in Italy. No definitive plan has been made on when Herlings may return to racing action.

In place of Herlings, KTM just announced former factory Kawasaki rider Mathys Boisrame as his replacement. Boisrame had been part of a long holdout by Kawasaki for the second spot that eventually went to Ben Watson in December. As such, Boisrame had no plan for MXGP in 2022 set in stone. After testing the KTM bike the last few weeks, he’s been called in as KTM’s lone MXGP rider for the first two rounds.

The three-time MXGP champion likely enters as the favorite for this year’s title without Herlings or Romain Febvre (fractured tibia and fibula) on the gate. That said, Gajser will not have it easy as he was behind Jorge Prado in the points standings last year when Prado crashed out of the German Grand Prix. It’s been a relatively quiet off-season from Gajser. Well, the off-season was really only two months anyway. He’ll be ready to go at the opener this weekend seeking his fourth premier class title.

Australian Mitch Evans finally returns to the MXGP starting gate this weekend after 15 months on the sidelines. A broken wrist and dislocated shoulder turned into three surgeries and nine months off the bike all together so it will be nice to see him back to fighting form again. Honda has waited patiently for Evans to be healthy again.

Like Herlings, Febvre will miss the opening round this weekend and likely more as he continues to recover from a double fracture of his tibia and fibula sustained at the 2021 Paris Supercross. Amazingly, Febvre’s recovery after his surgery has already seen him walking just two months after the crash, but he has still not been on a bike yet and is expected to miss the first few GPs at minimum.

The musical chairs for the final spot at Kawasaki ended in December when the spot went to Ben Watson. The team went through many changes in the off-season, moving from a French-based program to being ran by IceOne now with former Formula 1 World Champion Kimi Raikkonen as the team principle. They also ended their long partnership with Monster Energy as well. Watson now steps into this program as the team leader for the start of 2022 and will look to put the green machine up front as much as possible.

Two-time MXGP runner up Jeremy Seewer dealt with a spat of Epstein-Barr Virus in 2021 and ultimately brought home fourth in the championship. He did capture a win in Trentino late in the season and looks to bring more of that form into 2022. Opportunity is open for many without Herlings or Febvre on the gate.

The reigning MX2 World Motocross Championship shockingly took his option deal with Yamaha to go to the 450s instead of staying down to defend his crown another year. Pundits have called it the wrong move, but Renaux has already silenced some doubters with a win in the French Championship at Lacapelle Marival a few weeks ago. Renaux certainly has the ability to shock everyone this year and end up in the 2022 MXGP title fight.

Claudio De Carli’s team carried Antonio Cairoli to seven MX1/MXGP titles and has now switched from KTM to GasGas for 2022 as it will run the GasGas factory program now. Prado will debut the new 2022.5 Factory Edition GasGas this weekend in Great Britain (which has not yet been debuted in the USA yet) as Prado will certainly have his eyes firmly on the 2022 MXGP crown.

IceOne and Rockstar Energy have moved on from Husqvarna. In steps Standing Construct, who ran the factory GasGas program last year. Pauls Jonass and Brian Bogers stay with the team and simply hop from one Austrian motorcycle to another just like Prado. However, Jonass announced that he will miss the opening round this weekend following a small surgery to repair some inflamed tendons in his wrist. He does say he should be good to go for the second round in Italy next weekend.

Brian Bogers will remain in the second seat at Standing Construct alongside Jonass for 2022.

Jeremy Van Horebeek gears up for his ninth year of MXGP and his second year heading up the Factory Beta program ran by the SDM Corse team. Van Horebeek ended up 13th in the championship in 2021 after some mid-season bike issues and looks to contend inside of the top 10 again in 2022.

Alessandro Lupino jumps from MRT Racing KTM to fill the second seat at Beta this year alongside Van Horebeek.

Calvin Vlaanderen was one of several riders on the short list for the second seat at Factory Kawasaki. When the deal was announced that Watson would go to Kawasaki, Gebben Van Venrooy confirmed they had extended Vlaanderen’s deal into 2022 later that same day. Vlaanderen looks to improve on his 14th place finish in the World Championship in 2021.

Jasikonis incredibly returned to racing in 2021 after a traumatic brain injury at the 2020 MXGP of Lombardia. It was a slow grind in 2021 for Jasikonis in his final year with Rockstar Energy Husqvarna and he now moves to Gebben for 2022 hoping to reinvent his career.

Kjer Olsen jumps from Factory Husqvarna to Diga Procross KTM for 2022 but does have some factory help. He will be the lone MXGP class rider for the team alongside MX2 teammate and son of 10-time World Champion Stefan Everts, Liam Everts.

The Ruben Fernandez situation is arguably the most interesting to watch for 2022. Despite still being age eligible for MX2, Honda 114 Motorsports have moved Fernandez up to MXGP. Fernandez filled in for the injured Mitch Evans at Honda HRC at the end of 2021 and faired well enough to be rumored as the man who would end up at the second Honda HRC seat. Honda elected to bring Mitch Evans back, but Fernandez will remain factory supported at 114 while making his first full MXGP season debut.

With 2021 MX2 Champion Maxime Renaux moving up to MXGP, this team turns back to Belgian Jago Geerts to get it done in 2022. Geerts came into the season injured in 2021 and took a while to get rolling but was back to race winning speed by the end of the championship. He factors to be a title contender again in 2022.

The 2020 EMX250 Champion enters his second full season in MX2 for 2022. Benistant was both amazing and so-so in his rookie season as he captured two moto wins but also found the ground a decent bit. He will also miss the opening round this weekend as he’s still not quite 100 percent following ACL surgery in November of last year. He says he should be good to go by the second-round next week though.

In place of the injured Benistant, Yamaha called on the services of young Italian Andrea Bonacorsi. The Hutten Metal EMX250 rider will fill-in for Benistant this weekend and potentially more if needed. However, he is expected to compete in the full EMX250 calendar again which will start next week in Italy.

Tom Vialle won the opener in 2021 convincingly and then broke his hand a few days later in a practice crash. He was sidelined for three GPs but ultimately won several more races once he returned. He was already too far behind eventual world champion Maxime Renaux to defend his title. With a clean bill of health, a new KTM 250 SX-F Factory Edition beneath him, Vialle enters as the clear favorite again for 2022.

Roan Van De Moosdijk was one of the bigger disappointments in 2021 after a slew of injuries sidelined him for most of what would be his final season with F&H Racing Kawasaki. Now he jumps over to the Factory Husqvarna program which fields an all-Dutch team for 2022 as Van De Moosdijk looks to put his name in the hat of title contenders again.

Kay De Wolf was solid in his rookie MX2 season last year and even won a moto at the Belgian Grand Prix. Expectations are sky high for the youngster as he heads into his sophomore year looking to be a breakout star.

Mattia Guadagnini was the undisputed rookie of the year in 2021 as he won two Grand Prix and three motos en route to fourth in the world championship. Sticking with Claudio De Carli’s team as they jump from KTM to GasGas, Guadagnini is expected to be right in the title fight for 2022 like he was for much of the first half of 2021.

Simon Laengenfelder remains with GasGas and Red Bull as he goes from Diga Procross to the Factory outfit for 2022. After a respectable 10th in the World Championship in 2021, Laengenfelder looks to keep improving for 2022.

Kevin Horgmo is back full time in MX2 after dropping back to the EMX250 Championship for a season in 2021 where he narrowly missed out on the title to Nicolas Lapucci. The F&H Racing team goes from fielding three MX2 riders (Boisrame, Van De Moosdijk, and Mikkel Haarup) at the beginning of 2021 to fielding one MXGP rider in Jed Beaton and one MX2 rider in Kevin Horgmo for 2022.

Gifting goes from Diga Procross GasGas to Hitachi KTM on a two-year deal which will see him race all of the British Motocross Championship and most of the MX2 campaign. Gifting was a solid 13th in MX2 standings for 2021 but could miss a GP or two if the British Championship dates conflict with MXGP.

Conrad Mewse walked away from this Hitachi KTM program on January 14 and two weeks later the team announced a two-year deal with Kay Karssemakers. Karssemakers will make his MX2 debut this weekend in Great Britain.

The hype surrounding Liam Everts, the grandson of motocross legend Harry Everts and son of perhaps the greatest GP rider of all time Stefan Everts, has been coming for years. This year, we will finally see a full scope of what Liam Everts is capable of on the Grand Prix level after finishing seventh in EMX250 last year. With KTM and Red Bull backing, Diga Procross is not a full-factory team, but they will provide Everts with ample opportunity to show what he’s made of this year.

The Dane stays with Kawasaki for 2022 but goes from F&H Kawasaki to Steve Dixon’s Bike It MTX Kawasaki program.

Italian Andrea Adamo was a solid 14th in the MX2 standings for his rookie year in 2021 and his SM Action Racing Team will get some help from GasGas to maybe push Adamo to even greater heights this year.

Conrad Mewse started his own team of 426 Motorsports right after departing Hitachi KTM and immediately won the Hawkstone International two weeks ago with the program. Mewse will be an interesting story to watch in 2022 as he has shown many times to have the speed to run up front in MX2.