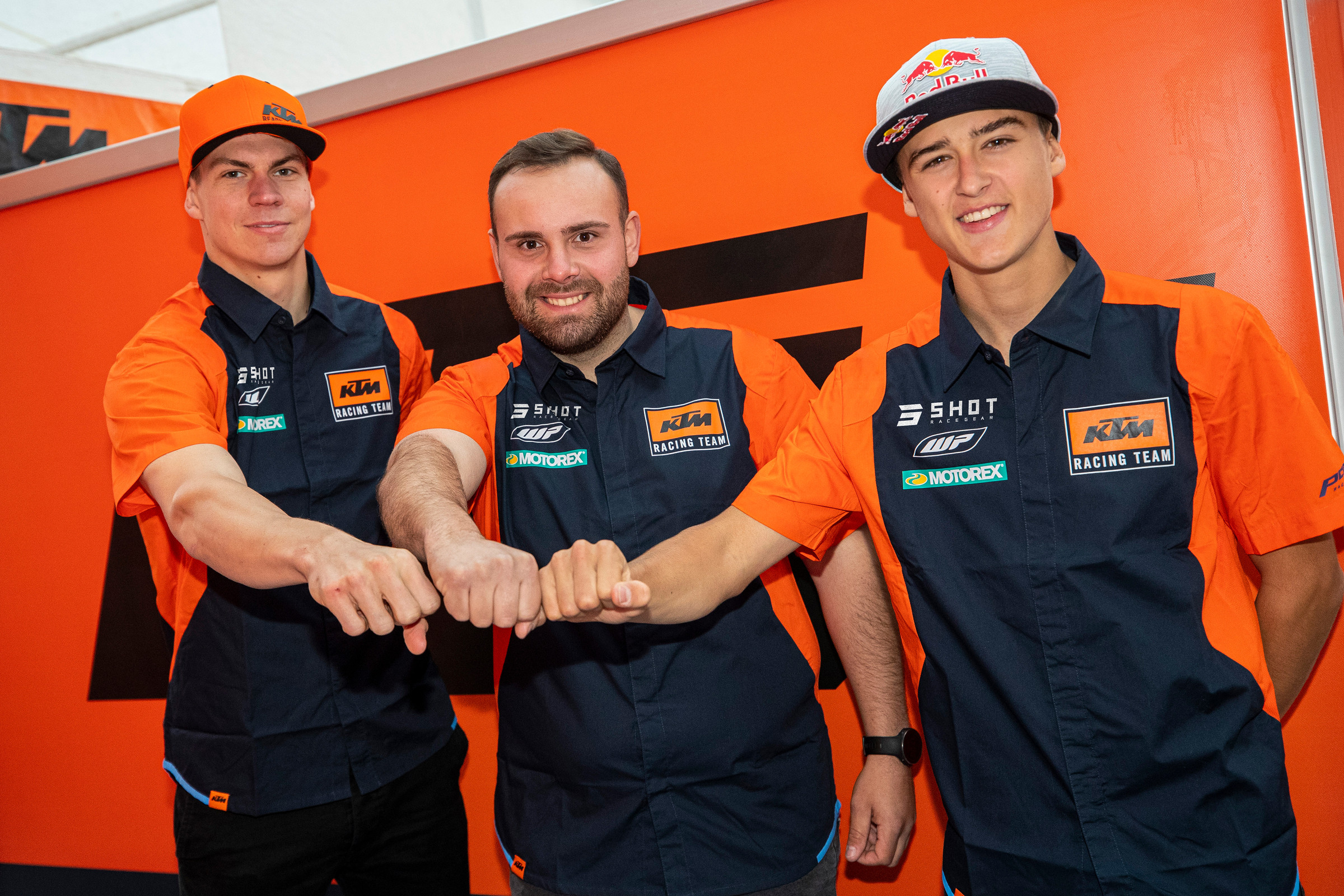 The DIGA Procross team came onto the scene in 2020 when their team debuted in the FIM Motocross World Championship (MXGP). Simon Laengenfelder and Jeremy Sydow competed on the first GasGas MC 250F motorcycles (newly under the KTM Group umbrella at the time). Laengenfelder finished 30th in the MX2 class as Sydow finished 32nd. Then Sydow went to Hutten Metaal Yamaha Racing as Laengenfelder stayed with DIGA Procross. Isak Gifting made a jump from the EMX250 championship to the MX2 class for the final few rounds of 2020.

In 2021, the DIGA Procross team was back for its second year—and second on GasGas motorcycles—with returning Laengenfelder and Gifting making the full-time jump to MX2 as the team became the factory GasGas program. Laengenfelder finished tenth in the standings (nine top-ten overall finishes) as Gifting finished 13th (five top-ten overall finishes). Now, the German team will be competing on KTMs in 2022, with two riders: Thomas Kjer Olsen in MXGP and MX2 rookie Liam Everts, son of legendary Stefan Everts and grandson of Harry Everts.

Olsen competed with the Rockstar Energy Husqvarna team in MX2 before he signed a deal in September 2020 to move to the MXGP class. Arminas Jasikonis, who joined the Rockstar Energy Husqvarna team in 2019, returned for 2020 and then signed a deal to remain with the team through 2021. Olsen, the 2019 MX2 runner-up, had a solid debut season in the MXGP class this year, recording seven top-ten overall finishes, giving him ninth overall in the standings.

Now, the Rockstar Energy Husqvarna MXGP team is no longer, as the IceOne Racing and Husqvarna relationship ended after eight years following the end of the season. Jasikonis landed a spot on the Gebben Van Venrooy Racing with Calvin Vlaanderen, and now TKO has landed with DIGA Procross. He will make the MXGP debut for DIGA Procross as he enters year two in the premier class.

Everts signed on as a Red Bull athlete in April 2021 while competing in his debut EMX250 championship. He debuted in the MX2 class at the MXGP of Sardegna when he finished 16-11 for 13th overall. In his first go at the Monster Energy FIM Motocross of Nations, the Belgian finished fourth overall in the MX2 class with 17-13 finishes, then he returned to finish out the EMX250 championship. The third-generation rider finished seventh in the EMX250 standings.

As for Laengenfelder, he landed a spot with the newly formed de Carli Red Bull GasGas Factory Racing team, which switched from KTMs to GasGas. The de Carli team will have two-time MX2 champion Jorge Prado in the MXGP class with MX2 sophomore Mattia Guadagnini and Laengenfelder on MC 250F machines. And Gifting announced in November he would be competing with the Hitachi KTM by Milwaukee team for the next two years.

The DIGA Procross team will debut on KTMs at the season-opening MXGP of Great Britain on February 20, 2022.

The following is a press release from KTM:

The bond between the ambitious DIGA Procross team and the KTM racing department has existed since 2018 as the outfit helped develop a number of riders and Grand Prix talent. Justin Amian’s unit will now steer KTM’s advanced SX-F motocross machinery – with factory backing - but they will also harbor the competitive objectives of Thomas Kjer Olsen in the MXGP class and newcomer Liam Everts in MX2.

Olsen enters only his second term in MXGP after claiming victories, podiums and three top-three classifications in a successful MX2 tenure. The 24-year-old Dane is looking to progress his career in 2022 after showing sufficient speed to become a top ten regular in 2021. Next year’s calendar will see #19 race the KTM 450 SX-F for the first time for what will also be DIGA Procross’ maiden appearance in the category.

Liam Everts makes the step into Grand Prix competition for his first full year at world championship level. The 17-year-old Belgian has been carving his name into the foundations of the sport thanks to excellent technique and bags of potential. He showed enough promise through the EMX125 and EMX250 European Championships (with podium appearances in both divisions) – as well as debuting for his country at the 2021 Motocross of Nations – to earn his MX2 berth with the KTM 250 SX-F.

“We are happy and proud to officially represent KTM in the FIM Motocross World Championship from 2022.With Liam Everts we have a young, hungry and very talented athlete in our team, and we will try to support his progressas much as possible. With Thomas Kjer Olsen wewill start a new chapter in the premier class in 2022. Thomas has personally developed a lot in his 2021 MXGP rookie season and has shown great pace, which gives us the confidence that he will one day be at the front of the toughest series on the planet. Our team is eager for great results and we will do everything in our power to get better and better every day.I would like to thank Pit Beirer and Robert Jonas for the confidence they have shown in us and for the opportunity to represent KTM at the highest level.”

“With the fit of Thomas, Liam, and the DIGA Procross team we are able to create an exciting effort for 2022 and the future. It’s an understatement to say we have high hopes for both riders in their classes and their stories and goals. We know Justin and rest of the DIGA crew will help them on the way and also push the KTM brand very hard. We’re already looking forward to seeing them on track.”