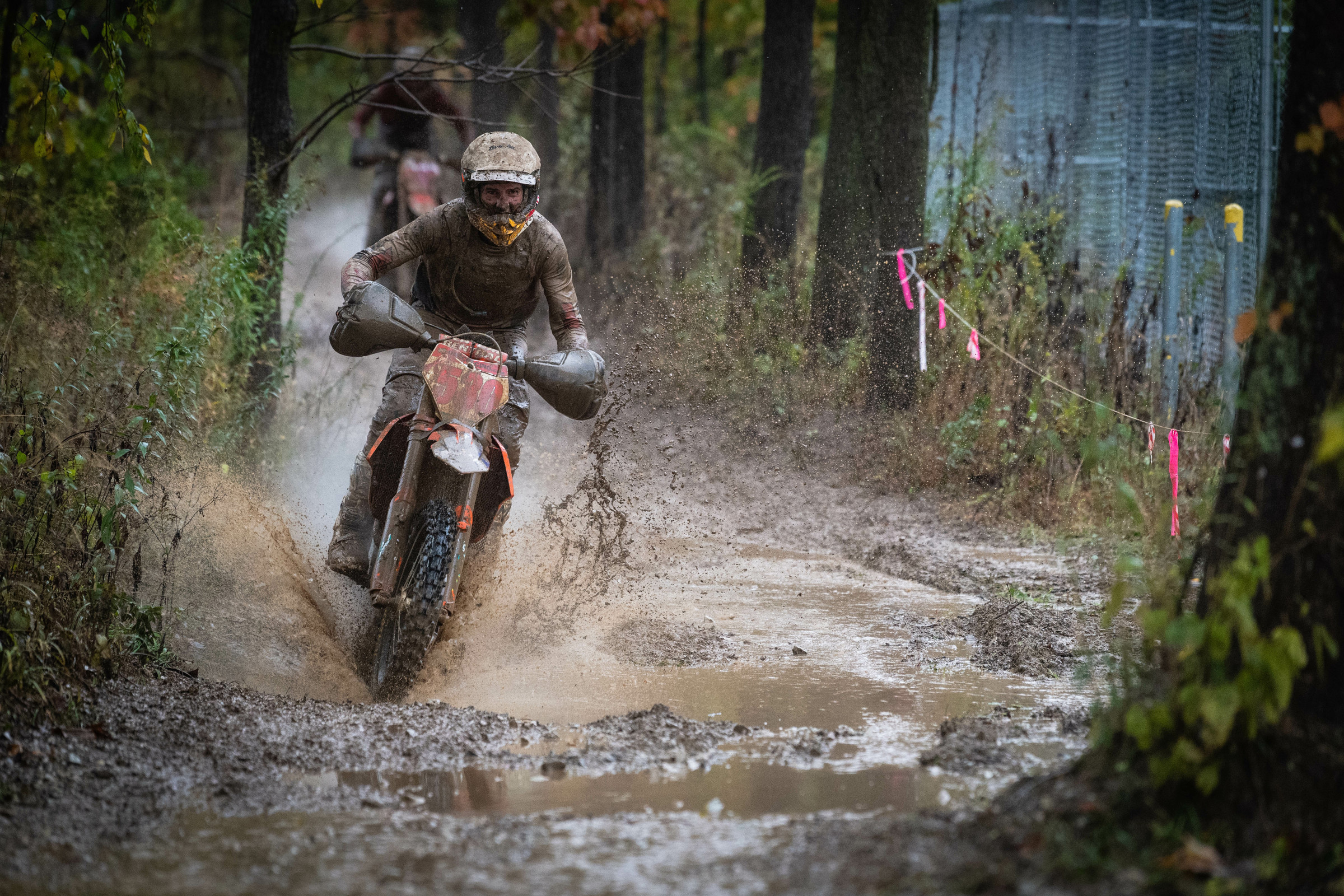 Many first-time big-time championship speeches involve some phrase similar to, “This is what I dreamed of since I was a little kid.” Because what kid doesn’t dream of ultimate success on the biggest stage? Well, in the niche sides of the motorcycle world, life is different. Ben Kelley rode and raced off-road because it was fun and because it kept him close with his family. Becoming a professional? Making a living as a racer? Winning a major title? Not even on his radar.

Now the 25-year-old is the new champion of the Grand National Cross Country (GNCC) Series, which is a big deal because Kailub Russell had gobbled up the last eight GNCC titles. Russell stepped aside from off-road racing in 2021, opening the “who else will win?” sweepstakes. It led to a fascinating battle to the wire between Kelley, of the same FMF KTM off-road team as Russell, and AmPro Yamaha’s Steward Baylor. Lots of pressure, lots of spotlight. Kelley grew up racing in New England and didn’t even really follow GNCC racing as a kid and is still relatively new to this level of success, so it was a lot of stress, pressure, and distraction.

Kelley had to learn how to win races-and fast. The key? Figuring out how to be strong through the third hour of racing. That’s when GNCCs are won and lost.

“Three-hour races are so grueling and so long,” he says. “The intensity is crazy, it’s a race so adrenaline is pumping, heart rates are high. And even if you’re the fittest guy out there, you can still get beat by someone who is grittier than you or can suffer more than you. And if you go even just five percent faster at the beginning of the race, you’ll have nothing left for the last two. Three hours, it’s a long time to be processing all that information when you’re flying through the trees, to not crash, to not make mistakes, to not get stuck on a hill or stuck in mud. There’s just so much going on. When it’s done, you’re smoked!”

It’s not just fitness at this level. Race strategy and energy management is even more critical. Baylor knows the game; Kelley is still learning.

“It’s a little bit of everything, fitness and strategy,” he says. “I was feeling pretty good all off-season, then two weeks before the GNCC opener I got banged up at a National Enduro. I couldn’t really do anything, and I was honestly pretty nervous that I wouldn’t be able to race. I was able to pull through, but then once I got healthy again, that’s actually when I had my dip in the results. It was race strategy. I was going too fast at the beginning of the race, maybe not taking the best lines, I was getting tired. It was tough to feel like I was the fastest guy and then get passed late in the race. I think on three occasions I got passed on the last lap. I had my tongue in the spokes, and I was doing everything I could to hang on. Once they passed me, that was it, I had nothing left.”

Kelley says he finally “managed a race right” when he won Snowshoe before the summer break. He felt much stronger after the break and rode well. But the pressure was mounting, especially the weight of trying to keep KTM’s GNCC title streak going.

“Even that will make you tired!” he adds. “There would be some races where just that pressure, you’re sitting on the line and….sad to say that I didn’t want to be there, which is crazy because the racing is the fun part. I just had to manage that and learn that. It was tough all year. Stu had a deficit all year, kinda’ like he had nothing to lose. I had to maintain it all year. In some ways we had a tough season, but I was able to pull it off.”

Kelley’s walk through fire was not over. Before he could finish this championship run, he’d have to deal with controversy first, and then an all-time mud race later.

The controversy came after the next-to-last round of the season. Kelley won, Baylor finished second, but then Baylor was penalized four points when he was caught cutting a small section of track. Once GNCC announced the penalty, the heat came Kelley’s way.

“That exact thing [penalty] happened to me last year at that race, so I just did everything I could to make sure I didn’t make a stupid mistake that could affect the outcome,” Kelley says. “Afterwards, hanging out, they told me there could be some penalties or what not. The team told me to just stay out of it so that’s what I did. It was a whole week before the penalty was announced, I’m sure these teams were fighting over stuff because there was so much on the line. Then the next Saturday we’re at the [National] Enduro and the announcement comes out. Social media blows up! Everyone was instantly hyping up Stu, supporting him and bashing me, as if I was the one who set him up the line or trapped him. I honestly don’t know what happened because I just stayed out of it. But it definitely affected me at the enduro, I had a lot on my mind, and I only got fourth. Luckily it settled down a bit. It’s hard, I’m sure he got a lot of negative comments coming at him, too.”

That was another new experience for Kelley. Then came the final stage. Epic rain all night and all morning before the Ironman GNCC finale. Kelley would have to finish third if Baylor won, and in these conditions, anything can happen.

Baylor actually ran into mechanical troubles immediately, so Kelley was looking good until the final mile of the first lap. Suddenly his bike died, and he feared Baylor was about to cruise by, pick up tons of points and the championship.

“My brain is not processing, I’m not even thinking, all I’m doing is trying to figure out what’s happening,” Kelley says.

Then came help from his friends. Kelley’s teammate is Josh Toth, who he actually grew up racing in New England. They went to kid’s birthday parties together. They’re lifelong buddies, and now teammates. Toth pulled over and the two went to work trying to figure out how to pump water out of Kelley’s bike. Later, yet another New England buddy, XC2 Champion Johnny Girroir (of Coastal Racing GasGas), also pulled over, and they triple-teamed on Kelley’s machine.

“Johnny was maybe in the overall lead of the race on time, and he just threw his bike down to help us. We had it upside down draining water out of the airbox, turning the rear wheel to try to get water out so it won’t hydrolock. And people are splashing us so we’re trying to block the airbox! Then my battery dies, luckily, we have two, I used the backup, that didn’t work, then we tried to bump start it. Finally, it got going, we put my air filter back in but it was covered in water and mud. Then, a guy racing I think the A class pulls over and just gives us the air filter off of his bike! Just all these good people sacrificing their race. I didn’t even ask these dudes, they’re just good people! I owe that guy everything!”

“The funniest part was, I came around the corner and in another eight of a mile, my mechanic is standing right there! I don’t know if he could have helped, really, but when I got into the pits, we changed the air filter again and they told me Stu was 30 seconds behind me. It was crazy all of this stuff happened and we’re still battling!”

Baylor’s clutch gave out, and somehow Kelley’s bike remained strong to the end, which is wild considering it was nearly dead on the first lap. “How does that make sense? The creek crossings just kept getting deeper! They told me I had eight minutes on Stu, but eight minutes in those conditions is nothing. It was good in a way, though, because in those conditions you can’t even think about points. You’re just focusing on the track.”

In surreal fashion, Kelley won the title and had no idea where he finished. He actually took ninth overall—he guessed he was probably in 40th.

“The second the race was over it was like this huge weight was lifted off of my shoulders,” he said. “It felt super good! It’s been such a long season and we’ve been training so much, taking some time off, I still feel good and still feel super strong. It’s just weird. Once you accomplish what you’ve been working for all year…it’s just…now it’s over and you have to just focus on the next thing, I guess. The winning is awesome, everyone wants to win. When you win it feels so good, but the losing is the worst part. Coming up close and getting second, that’s what fuels the fire. That’s what you think about. Losing is pestering you in your mind the whole time.”

It was a trial by fire, for sure, but Kelley had to deal with the full menu of pressure, drama, and scrutiny. He never expected all of this to be heaped on him, but when he found himself in the toughest spot, the familiar faces from back home in New England came to his rescue. They finished the journey together, and now that region gets to claim a Grand National Cross Country Champion as its own.