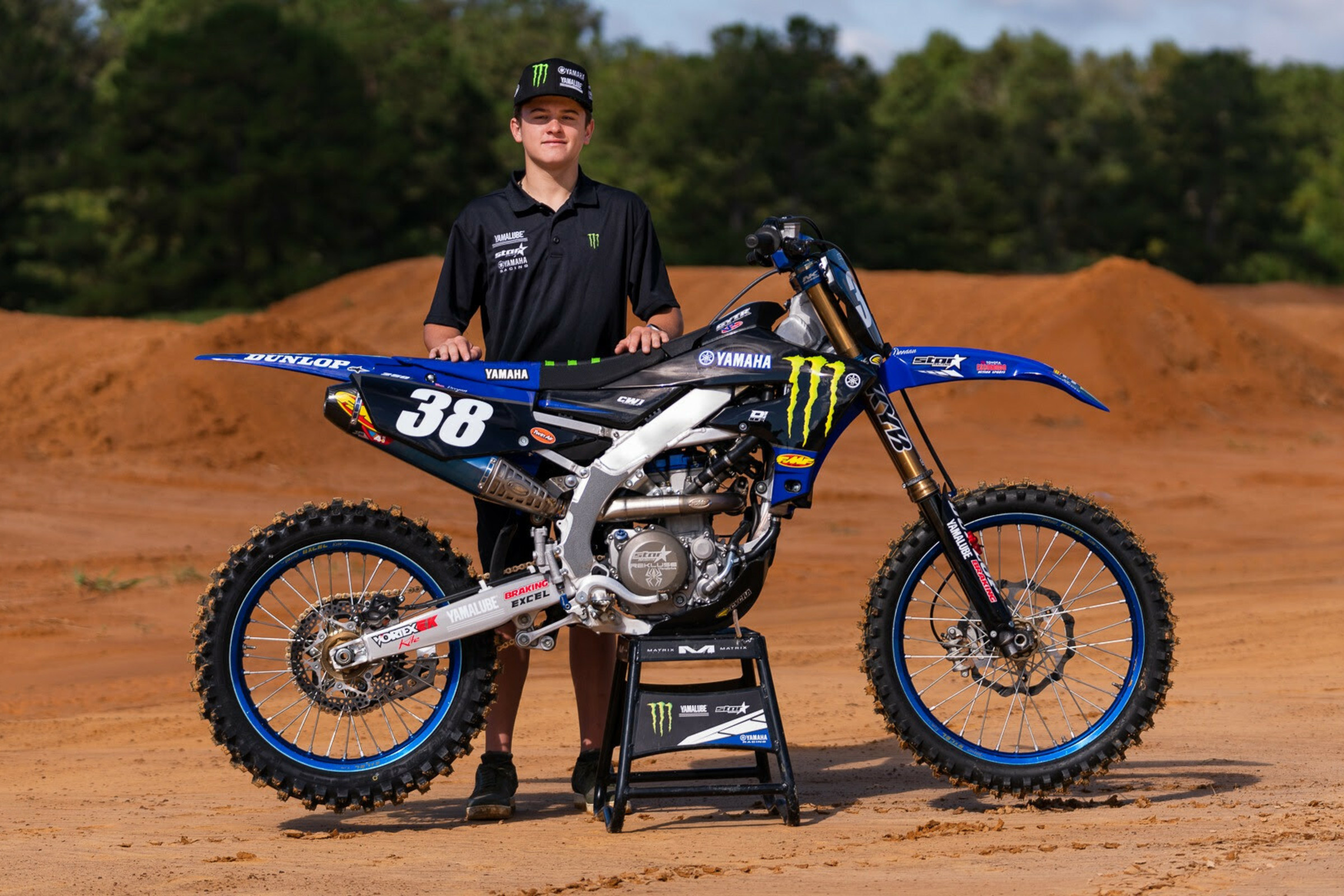 The professional ranks of AMA Supercross and Motocross are not the only ones that have seen quite the silly season in 2021. A quick glance down to the amateur ranks shows that the musical chairs are still moving as riders get ready for Mini O’s in just over a month. On Monday, the latest bombshell fell after long-time KTM Orange Brigade rider Haiden Deegan announced he has moved to Monster Energy/Star Yamaha Racing. With other big names like Chance Hymas and Preston Boespflug landing in new places, we wanted to see what you, the fans, think will be the biggest impact move as these three riders prepare for their final days as amateurs before graduating to the pro ranks.

Kellen Brauer gives you the breakdown for each situation and Jason Weigandt also weighs in with his take.

It was the news that seemed inevitable, but we needed to wait for things to fall into place. With the Deegan family ties to Monster and Haiden already in THOR gear, Star Yamaha Racing seemed like the perfect fit. But Deegan has been with KTM since he was on 50s and his father Brian Deegan is certainly shrewed enough on the business side to entertain all offers from all teams. It might look inevitable because Star has become the hot spot for 250 talent, and Haiden was already with Monster and Thor, but it was certainly worth a talk to see if the KTM relationship could continue. In the end, Star won.

Aside from Deegan’s talent, he brings with him an almost never before seen level of influence and exposure that lots of suitors would have no doubt found to be lucrative. But ultimately, the puzzle piece fell together, and Deegan is now with Yamaha for the end of his amateur career and into the pro ranks. He joins fellow amateur riders Nick Romano and Matthew LeBlanc who are both headed towards professional careers with Star Racing as well.

The move does leave KTM without Deegan and now the question will revolve around Daxton Bennick. Bennick got on a 250 earlier than Deegan despite racing each other most of their lives as Bennick hit a huge growth spurt. Max Vohland is currently holding down the fort for Red Bull KTM in the 250 professional ranks though. We will see if Bennick gets set as KTM's star of the future.

But for Deegan, the train is really rolling now. There will be a lot of anticipation around Deegan’s final days in the amateur ranks and how he transitions to the pros. It remains to be seen how the charisma of Deegan will gel with the Star Yamaha Racing program which has been known of late for toughness and diligence. If it all works though, Star may have just poached another diamond for their future.

Weigandt's Take: It's funny, on the outside everyone thinks teams want Dangerboy Deegan because of his YouTube following. That's still not how this industry works. Race teams want race wins and titles. The are not marketing machines, they are results machines. Yes they have sponsors but at the end of the day team's get patted on the back when they win, and if they lose no one cares if a rider put out a cool Vlog or IG post. You might think that's short sighted or maybe you think it's old-school cool. But it's the way it is.

As proof, Brian Deegan told me in some way Haiden's popular YouTube channel was actually an obstacle for teams. They don't want secrets getting out. I also think some teams immediately think a popular rider cares more about image than results. If you win, everything is fine, but if you don't, they know where to point the blame.

Bottom line is that this is a results play for both sides. In the words of Star's Team Owner, Bobby Regan, "We just wanna win, boy." Deegan is fast. That's it. On the Deegan side, we all know the Star YZ250F is the bike to be on if you want to win. That's it. Winners want to win. YouTube views are just a bonus.

Idaho’s Chance Hymas could be considered the latest of the “late bloomers” depending on how you size up his amateur career. Having spent the last five years with Team Green and transitioning onto the 250F last year, he really has started to turn some heads. Enough so to catch the eye of Honda HRC and they made a lengthy commitment to him recently as it was announced Hymas would jump from Kawasaki to Honda to finish his amateur career in 2022 with a pro deal lined up with HRC in 2023 and 2024. Hymas also extended his deal with Fly Racing for another four years as well. He’s arguably become one of the hottest up and coming riders.

His amateur career was plenty good, first with KTM, and then with Kawasaki. But he was left to deal with the nearly unflappable success of Ryder DiFrancesco nearly every step of the way, plus Jett Reynolds still left a big shadow after all of his early success. After five years alongside Ryder D as Team Green teammates, Hymas is moving on. For Kawasaki, they still have DiFrancesco, Gavin Towers, and new signing Preston Boespflug on 250s so they are going to be fine, but the exit of Hymas likely stings a little.

For Honda, this is a new (old) avenue for them. Factory Connection ran their amateur program for so long and eventually led riders into the GEICO Honda program, but with GEICO going away, so too did Factory Connection’s amateur program. That unfortunately left their recruit at the time Hunter Yoder without a full factory seat essentially. But now Honda is dipping their factory support back into the amateurs to land Hymas a year early with the hope of bringing him alongside the Lawrence brothers at the end of 2022. He’s their future, and they may have played their cards at just the right time.

Weigandt's Take: This kid has already proven himself over the last two years, first by beating the bigger names (at the time) in the B class last year, and then by giving A class hero Levi Kitchen all he could handle this year. Hymas is solid and his future is bright.

This is a bigger deal for Honda. Until the Hymas rumors started going around I don't know if anyone knew of Honda's plans beyond the Lawrence brothers. With GEICO/Factory Connection out Honda had zero amateur presence for a bit. This really changes the game, and since the Lawrence brothers were so good on the factory team this year, that's now become a much-respected team. You know many amateur racer parents will now be looking red, and hoping to get the next "Hymas deal." Yes that matters.

Boespflug is not someone that really has been on a lot of people’s radars, but you should probably get familiar with his name. The Pacific Northwest native has spent most of his amateur career, at least at the national level, with support from Motosport Hillsboro, which is a local dealership to him in Oregon. He had some success on minibikes, even finishing second in Mini Sr. 1 at Loretta Lynn’s in 2018 behind DiFrancesco, but it seems like he’s really coming into his own on the big bikes now. With Hymas vacating his spot at Kawasaki, Team Green has now turned to Boespflug.

As of now, this is still only an amateur deal for Boespflug that runs through the end of 2022, but the possibility of this becoming a successful relationship into the pro ranks is certainly possible. DiFrancesco is the future for Kawasaki and certainly will follow fellow amateur phenom Jett Reynolds onto Monster Energy/Pro Circuit Kawasaki within the next couple of years, but seats could still be available beyond that. Gavin Towers is in a contract year right now and even if he re-signs with Team Green, it might not be a guarantee for him to move to the factory effort professionally. Boespflug's performance with the team certainly could move him into a position where the transition to the factory team becomes a possibility.

If he and Kawasaki gel right away though, this could work out to be the true diamond in the rough we seem to get every few years. This situation feels similar to Shane McElrath in a way who was a privateer Honda rider until a breakout year and then he spent eight years on factory 250 teams from 2013 to 2020. It’s entirely possible that Kawasaki and Boespflug also found each other at the perfect time.

Weigandt's Take: Never heard of Boespflug? Don't know how to say his name? It's Base Floog. No amateur program has the history and consistency of Kawasaki Team Green. I have big respect for Team Manager Ryan Holliday. I don't think he or that brand picks duds. If they see something in someone, then I can't question it. After all, this was the spot Hymas was in at one point and he blossomed big time.

So, there you have it. Big names moving to big places with big futures potentially ahead. Even if you don’t pay close attention to the amateur motocross scene, remember these names, because it’s going to be your 250 class frontrunners before you even notice. So, which team and rider combo has the biggest upside? Vote below!

Which rider signing has the biggest upside for rider and team?