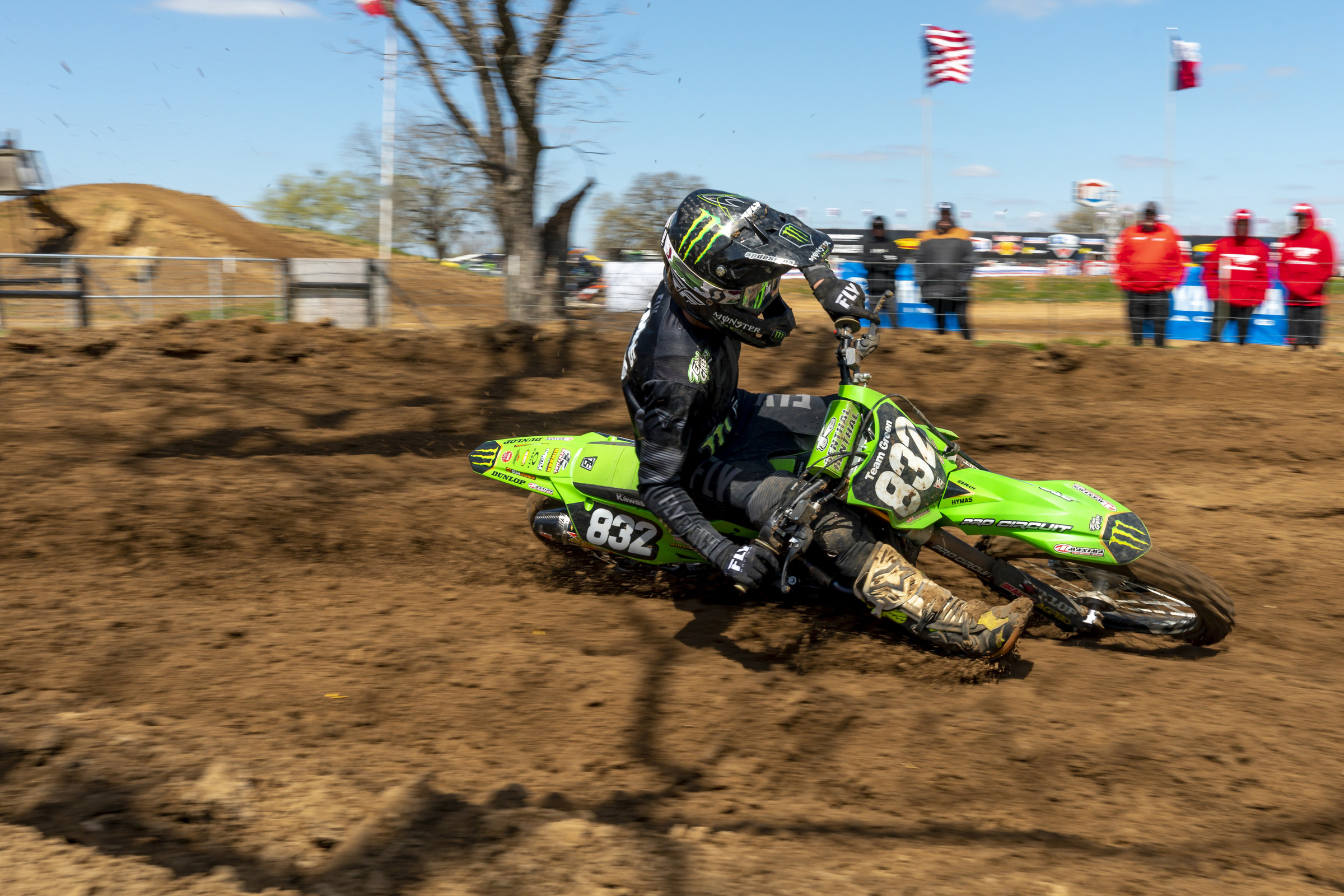 The blueprint of Chance Hymas’ developing career in motorcycle racing came in the form of a southeast Idaho dealership called Pocatello PowerSports. His dad, Chris, a rider himself, owns the dealership in Pocatello, Idaho, where Chance grew up with his two older brothers.

“I’ve been around it for so long I just picked up on it, because I’m always hanging around the shop when they [were] working on bikes,” Hymas said.

Fast forward to the present day and Hymas is one of the top amateur racers in the country. He chose to stick with his race number (#832) because it was what his dad ran as a young amateur racer. Now, as a member of the Team Green Kawasaki amateur racing program, Hymas spends a lot of time around bikes—on and off the track—something his dad instilled in him at the dealership.

“I basically do all of it,” Hymas said of performing bike work. “My dad owns a dealership and he’s super busy with that. I’ve grown up at the dealership, and there’s technicians there. I’ve kind of just grown up around it and picked up on what they’re doing.”

When Hymas is not on the track racing for moto wins and championships, he takes care of his Kawasaki KX250. He can—and does—perform the typical tender, love, and care on his bikes but he also can get into the more technical maintenance steps when necessary.

Spending time in the garage helps the teenager understand the bike better. Hymas said so far, he has adapted well to the new changes to the 2021 model—most notably the hydraulic clutch, electric start, and addition of A-Kit suspension. After jumping up to the A class for 2021, the soon-to-be 16-year-old has been racing against some strong competition—and racers several years older than him. The #832 looks to better his skillset by racing against the older, better competition. And his results showed that as he’s claimed moto wins at Spring a Ding Ding and James Stewart Spring Championship at Freestone.

“I thought Spring a Ding and Freestone went really well,” Hymas said on the Spring nationals. “My goal was to go there and contend for a championship. I wanted to be on the podium every moto. So, I think I accomplished my goal and more. I was stoked to win a championship at Spring a Ding. I got a half-decent start, with all the 450s in that class because I won the open pro sport. It was pretty difficult.”

“I was probably mid-pack and I made passes pretty quick,” he continued. “I realized Levi [Kitchen] wasn’t out front, so that kind of fueled the fire a little bit. So, I got to the front quick and just started laying down heaters. I just tried to get into a pace. I ended up winning that moto, which I was super pumped about. That was probably the highlight of that weekend.”

Levi Kitchen, a fast kid from Washington who went next level on the amateur scene in 2020, signed a deal with the coveted Monster Energy/Star Yamaha Racing team recently. Kitchen is one of the older riders in the open/A classes—he is 20 years old compared to 15-year-old Hymas and others in the field. While the youngster was able to best his elder competitor, Hymas still learned a lot from the events. He knows where he can improve and what to focus on moving forward. Pacing off of someone like Kitchen bumped Hymas’ abilities, as intended.

“At Freestone I showed good speed, I was just making lots of mistakes, lots of mental mistakes,” he said. “Just forgetting to breathe and forgetting to shift up and stand through corners and stuff. That’s what Levi was super good at. In the motos I would get behind him and I would just try to figure out what he was doing, like hopping. He’s really good at staying light on the bike, so I was just trying to figure out what he was doing.”

In addition to improving his comfort with his Kawasaki and his skillset, Hymas has entered in several off-road races. While his focus is on the motocross track, the longer, grand prix style races help him improve his endurance and race craft. Racing well on the longer races on beat-up tracks will translate back to the straightforward moto tracks. Hymas competed in two rounds of the World Off Road Championship Series (WORCS), finishing second in the Pro 250 class at the first round and then claimed the class win at round three. His winning total time from that race? Two hours and one minute compared to a typical 20-minute moto.

“Yeah, I think they’ve helped me a lot,” Hymas said of the WORCS and National Grand Prix Championship (NGPC) races. “It helps a lot with moto, endurance-wise, and just trying to be smart. It helps just trying to find smooth lines. You remember to keep your form good, that’s for sure. I think with moto it helped a lot with line choice, especially when you go to a hard-pack track like most of the Cali tracks. I think that’s where it benefits the most. Where I could really tell where it helped was in some of the long motos at Spring nationals. It felt like late in the race my pace was higher than most people in the class, just because I wasn’t getting tired. I actually felt like I ran faster laps later in the race than I did in the beginning. I like to think that WORCS and NGPC is helping a lot with that.”

“The competition is pretty steep in their Pro 250 class both those series have,” he continued. “Those guys are the real deal, that’s for sure.”

While his focus is on the motocross track and qualifying for the 2021 Monster Energy AMA Amateur National Motocross Championship at Loretta Lynn’s Ranch, if there is an event going on that he can race, you bet Hymas will be there.

“Overall, I think if it fits into my schedule, I will for sure keep doing those,” he said of the off-road events. “We’re going to have regionals and maybe Mammoth if it happens. So, if there’s no moto things going on, I’ll for sure be doing the off-road stuff.”

At the 2020 AMA Amateur National Motocross Championship, Hymas won the Schoolboy 2 (12-17) B/C class with 2-3-1 moto finishes and finished third overall in the 250 B class with 2-5-4 moto finishes. In his Schoolboy 2 (12-17) B/C win Hymas bested a few top-level names for the top step on the podium in Jett Reynolds and Nate Thrasher. Reynolds was an amateur star, claiming one overall win after another en route to becoming one of the most decorated minicycle racers ever at the ranch. And skilled Thrasher quickly switched from KTM to Yamaha and made his pro debut last summer in the Lucas Oil AMA Pro Motocross Championship (finishing in the top 15 overall both times) before earning two AMA Supercross 250SX main event wins in March at Atlanta Motor Speedway.

He is going into Loretta Lynn’s with big ambitions, but the goals are still to be at the top step of the podium as he aims to claim the overall win in the top two classes.

“My goal for Loretta’s, I want to win both 250 Pro Sport and Open Pro Sport,” Hymas said. “Where I’m at, that’s what I’m striving for. It sucks getting second there. I have a few times the previous years that I’ve gone there. That race is what I want to win more than anything. If I can go there and win Open Pro Sport and 250 Pro Sport, honestly that would be awesome. My goal throughout the week would probably be just stay on the podium each moto. You want to go there and go six for six, but the competition is steep. It’s going to be difficult, that’s for sure.”

Extra hours on and off the bike will put Hymas in a situation where whenever he does jump to the pro ranks, he will be ready. For now, he’s focused on claiming more #1 amateur plates.

Since he was young, Hymas has spent a lot of time around motorcycles. And now, with the way he is currently projecting, they could be in his life for many more years to come as he continues to prepare for a career in professional racing. And it all started back at Pocatello PowerSports.