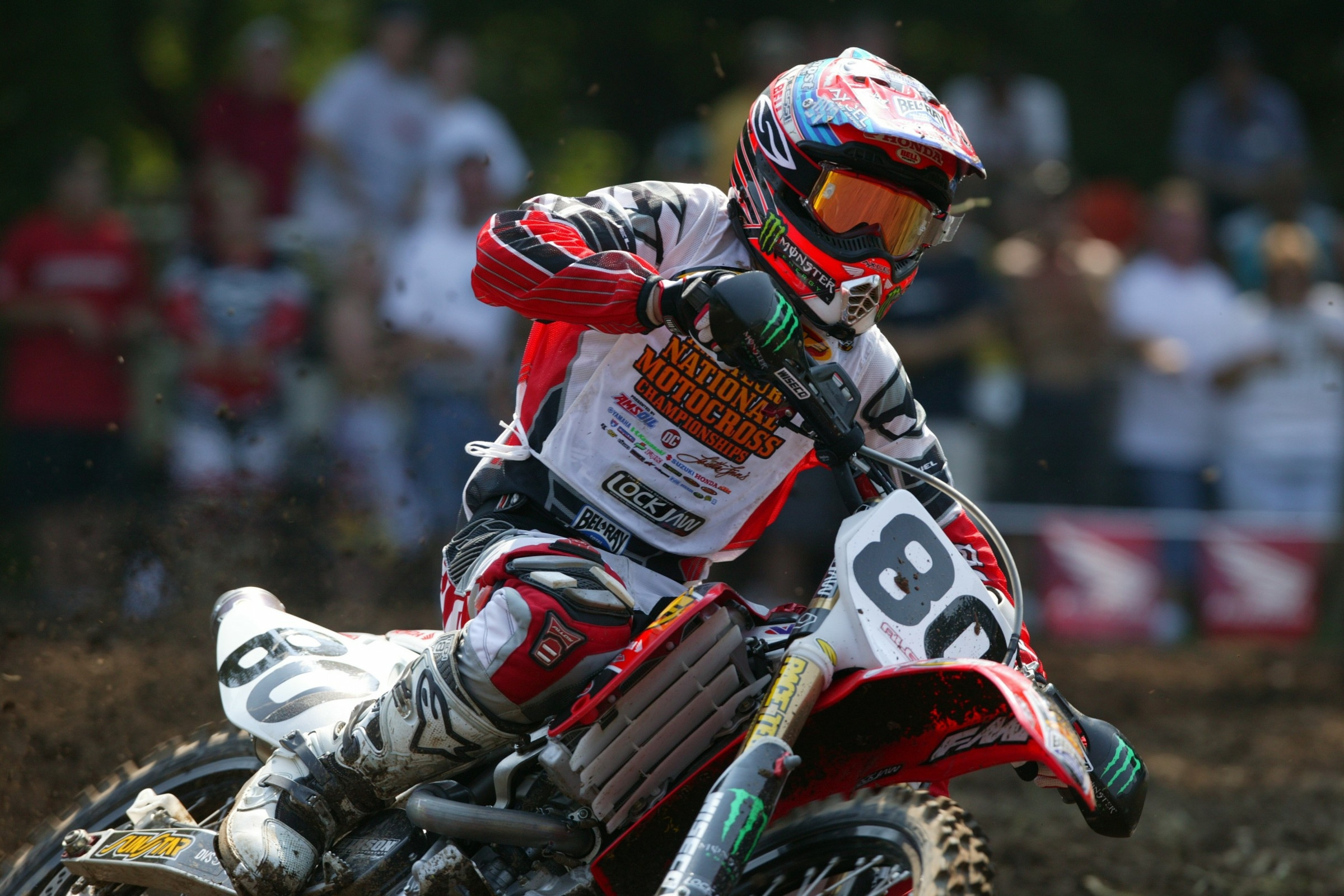 30 Stories From the Ranch: Believe the Hype Gets Out Hyped

The odds are pretty crazy that this happened. A lot of thought goes into the moto and race order for the Monster Energy AMA Amateur National Championship at Loretta Lynn’s, mostly designed to make sure riders racing two classes don’t end up in back-to-back motos, and also to make sure certain-sized bikes race at similar times (like all the 50cc bikes race in a row, so the track can be shaped up better for the little bikes). When it all shakes out, each rider will end up having some races in the morning and some races in the afternoon.

This one time, though, the moto order hit just perfectly for something completely different. In 2004, the Alessi family had turned the hype to 11 (or 800) in anticipation of Mike Alessi’s coming pro debut. Believe the Hype shirts were coming, and Mike’s dad Tony had strategically picked a series of expert-level races to pit Mike against the likes of Jeremy McGrath and Ryan Hughes in one-off events. Mike beat them. He would then end his amateur career at Loretta’s in 2004, before heading to a pro debut at Spring Creek in Millville, Minnesota. At first, Mike was scheduled to race the 125/250F class at Millville. Unfortunately, they tuned the hype a little too much. In ’04, James Stewart was the absolute dominator in the 125 pros, winning all but one moto that summer. Mike, during a series of interviews pumping his debut, made the mistake of saying that other riders on the gate were “giving” Stewart wins. He wanted to show up at Millville and battle James.

In those 125 days, one did not trifle with Stewart. He was literally unbeatable (sans for one moto at RedBud when he crashed in the first turn and broke his bike). This was not really a matter of other riders giving or handing Stewart wins—he was just simply way faster than everyone else. Stewart knew it, and he didn’t like the Alessi comments. He was more than happy to show Mike the way come Millville.

So, the Alessi plan changed, and Mike instead decided to race a 450 at Millville instead. This way he could avoid a pissed-off Bubba. He wisely said the goal was to holeshot, lead a lap, and finish on the podium. At least this avoided the ire of 450 dominator Ricky Carmichael.

Stewart didn’t forget, though. As luck would have it, Kawasaki had scheduled a demo of the 2005 KX line at Loretta’s, and James would get to do a few laps on a KX250 during intermission. The world had been waiting in great anticipation to see Stewart on a 250. He would race one—against Carmichael—the next year. Fans lined the fences to get the first watch of Bubba on a 250. Meanwhile…Alessi was on the starting gate. By chance, one of his Loretta’s motos was scheduled to start just after intermission, so he was there, on the gate, as Stewart rolled out.

Then Stewart started going HAM on the Loretta’s track. In particular, he lined up a quad over the two doubles ahead of the finish line. First, he tripled, then he started heading to the fence to get an even bigger run at the jump.

Then, he turned around and rode back over to the starting gate. Alessi was there, sitting on his bike, waiting for his moto. Stewart waved and pointed at him, as if to say, “Come on out and play” in a mocking moment. Then he jumped the huge quad. It was like a modern day Evel Knievel thrill show. How far could Bubba jump on this 250? The crowd was going crazy. Stewart’s intermission run, and his first public appearance on a 250, had just happened to take place moments before one of Alessi’s final runs at Loretta’s.

To Mike’s credit, he was a machine at Loretta’s, and he didn’t let Stewart’s taunting rattle him. He banged out another of his signature holeshots and pulled away from his closest challenger, Jacob Saylor. Sensing that he had answered the challenge, Mike spotted a group of Fox-clad folks watching from the infield. Mike must have thought that was Stewart’s gang. While leading, gestured over the jump, as if to say, “See how fast I am?”

But Stewart wasn’t in that crowd of Fox folks. He was already back at the Kawasaki rig changing out of his gear. Carmichael was in the group, and immediately asked, “Wait, is he pointing at me?” The Alessis had tried not to poke at RC, but now Mike had just done it, accidentally.

Suffice to say Carmichael had a few comments of his own as Alessi motored around en route to the moto win.

Alessi’s record at Loretta’s is incredible. He is tied with Stewart (and Adam Cianciarulo) for titles there with 11, only vet racer Kevin Walker has more. He won the last seven titles he competed for at the Ranch, often with three-moto sweeps. We’ll get into more Alessi stories, such as his rivalry with Ryan Villopoto, later as we count the days down to Loretta’s. But one of the best stories of all didn’t involve a moto, it involved the hype of his pro debut colliding with the hype of Stewart’s jump both to and on a 250. It just happened to play out in front of the fans and racers gathered for intermission at Loretta’s.