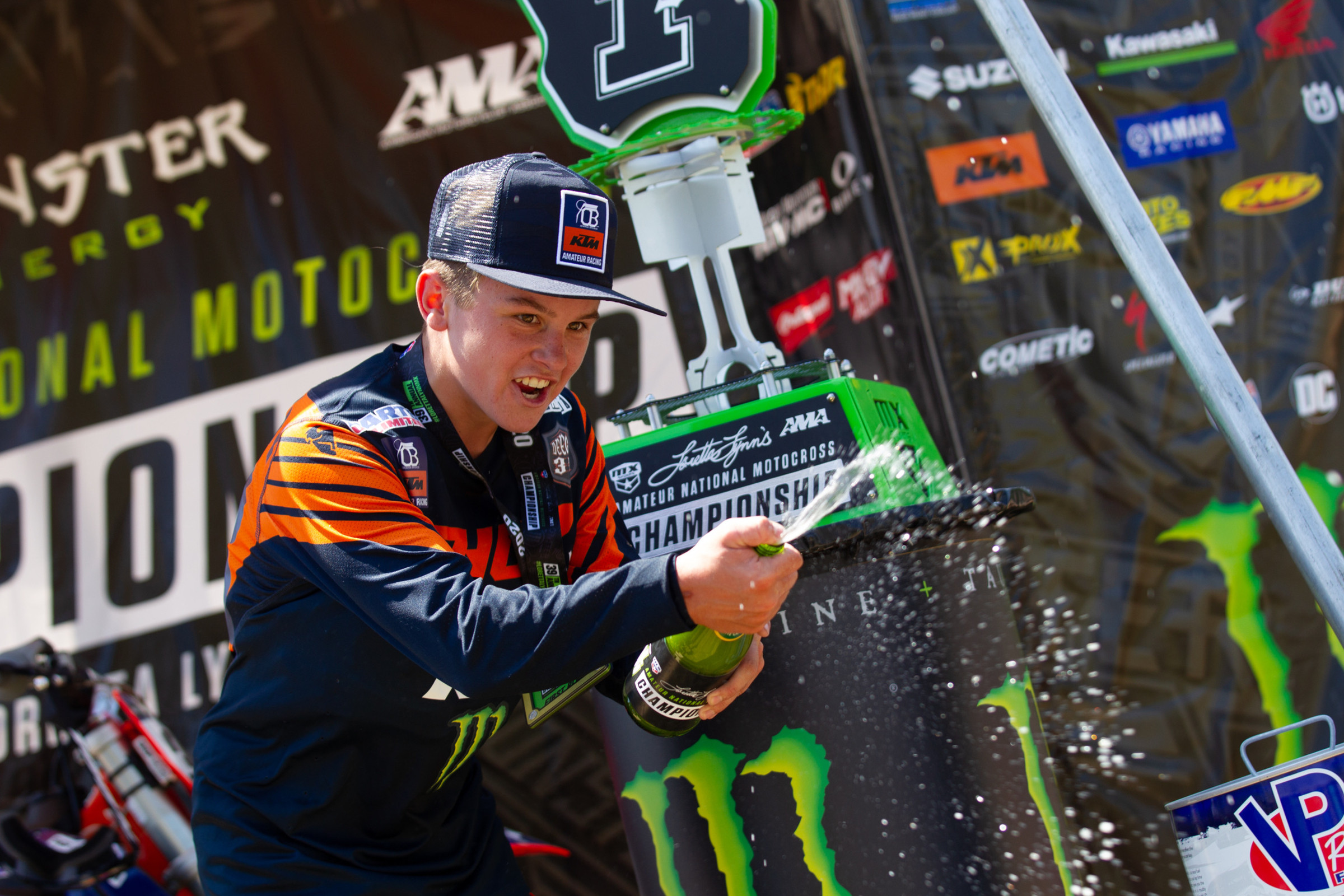 Things We Learned at the Ranch Friday

With the 2020 Monster Energy AMA Amateur National Motocross Championship at Loretta Lynn's underway, we’re going to provide you a written recap highlight the best action from each day’s motos. Here’s what we learned on Friday's racing at the Ranch.

Jett Reynolds used to own his classes at Loretta’s, but when he missed the 2018 event with injury Nate Thrasher took control with a dominant week. Both riders missed the 2019 event with injury, but in 2020 a championship duel has developed between them in Schoolboy 2. Monster Energy/Star Racing Yamaha’s Nick Romano found himself drop out of contention in heartbreaking fashion when he led the second moto early only to have problems and ride off the track with a DNF. Thrasher took the lead and took off for the moto win. Reynolds had won the first moto, but suffered a huge crash in his 250 B moto and was pretty beat up here. He held on for second.

“I went over the bars, hurt my lower back, rung my bell a little bit. I wanted to win the race because I’m in this championship,” said Reynolds, of Monster Energy Team Green Kawasaki. “Man that was the longest race I’ve ever run.”

As for Thrasher, the Troy Lee Designs/Red Bull KTM rider has caught fire. His early motos were mired with bad gate picks (drawn at random here at Loretta’s) but he’s found his groove now. The Thrasher/Reynolds championship showdown now looms on Saturday afternoon.

We also have what must be the youngest rivalry here with (4-6) riders Kade Nightingale and Jaydin Smart. They faced off on Cobra two-stroke 50s and also the new Mini E electric KTMs, and battled each time. In the Mini-E (4-6) Jr. class, Nightingale won moto one, Smart led moto two but Nightingale took the win. Smart returned to win moto three on Friday, but Nightingale won the title with the 1-1-2. The electric bikes proved capable, and KTM also got valuable R&D out of watching the fastest kids in the nation push the bikes to the limit. Back on the gas 50s, the duo would square off again, but this time Smart got the moto win and the championship, with Nightingale pressuring him the whole way. That left them split for the week with one title each. These are riders in the six-year-old classes. Could we be in for a dozen years of battles between them here?

The breakout star of this week in undoubtably Rock River Yamaha’s Levi Kitchen, who has dominated his B Limited classes (for bikes with limited modifications) with massive leads and perfect motos. He completed his first title sweep with the 1-1-1 in 250 B Limited.

“This is surreal for me, to win is the goal but to go 1-1-1 is unreal,” said Kitchen, who as of Friday had logged the fastest five lap times of the week. “I want to thank the whole Rock River Yamaha team for completely changing my riding. I plan to go home and do a little bit of fishing, because I’ve been working for a while, but after that I’ll move to A and see how it goes.”

Also in dominant form is Haiden Deegan, who swept all six of his Mini Sr. Motos to become the first double champion of the week.

Matt LeBlanc is leading the mega-stacked 250 B rankings after two motos, and has now polished off the 450 B championship. It wasn’t easy, though, as a bad gate pick ruined his start and led to a third. He bounced back and battled for the second moto win, setting up a big showdown in moto three. LeBlanc, Luca Marsalisi (Kawasaki), and Luke Kalaitzian (Honda) sat tied for the overall entering the final moto. Kalaitzian holeshotted the race but LeBlanc was right on his tail. LeBlanc would take over the lead and Kalaitzian would run a close second behind the Monster Energy/Star Racing Yamaha rider until bumping into LeBlanc’s back tire and going down in the rutted-out, 180-degree turn by the billboard.

Kalaitzian and LeBlanc getting together in the final 450 B moto:

Wyatt Matson (Husqvarna) would enherit second place—where he would eventually finish the race. Kalaitzian would go down again ahead of the finish line, which cost him a lot of time as well before finishing the moto sixth. Marsalisi was inside the top ten off the start but would suffer a crash of his own and drop back to dead last by the end of the second lap. He charged back to 19th but his overall finish (seventh) was hindered by his finish in the final moto as LeBlanc (3-1-1) cruised to the race and overall win.

Jordan Jarvis (Kawasaki) finished 1-1-1 for a perfect sweep in the Women’s Class but behind her lots of position changes resulted in a new overall podium finisher. Taylor Allred (KTM) and Hannah Hodges (Husqvarna) entered Friday in second and third overall, respectively, but eventually another Husqvarna filled the final overall podium spot.

When the gate dropped on the final moto, Allred got out front from the get-go but Jarvis moved quickly into the lead. Behind her, Allred put up a fight for second with Hodges as Tayla Jones (Husqvarna) ran in fourth. But on the second lap, Hodges would encounter trouble as she went down and dropped back outside of the top 15. Jones moved into third but would eventually finished fourth behind Sophia Phelps (KTM), Allred, and Jarvis as the New Jersey native checked out to take the checkered flag.

Jarvis’ title in the class was her sixth title at the Ranch since 2014. She will now attempt to qualify for Lucas Oil AMA Pro Motocross Championship events this summer, beginning next week here at the Ranch for the first ever Loretta Lynn National.

Allred’s 3-2-2 gave her second overall and Jones finished 6-3-4 for third overall in her first time at the Ranch. After receiving her medal, Jones left the Ranch to head for the Full Gas Sprint Enduro race in Georgia that will take place today and tomorrow. Hodges managed to finish ninth in the final moto but her 2-6-9 finishes gave her fifth overall as Phelps finished 9-4-3 for fourth overall.

Rockstar Energy Husqvarna's Stilez Robertson has taken control of the Pro Sport divisions, and on Friday he locked the 250 Pro Sport Championship with 2-1-1 scores. Stilez is now the favorite for the coveted AMA Nicky Hayden Amateur Horizon Award, but he does have an Open Pro Sport showdown looming on Saturday.

Robertson's 250 title already made something big happen, as Husqvarna showed him his pro license after he won the title, and his entry for next weekend's Lucas Oil Pro Motocross opener here at Loretta's. Stilez is making his pro debut at a track he knows very well. This should be very interesting to watch next Saturday!