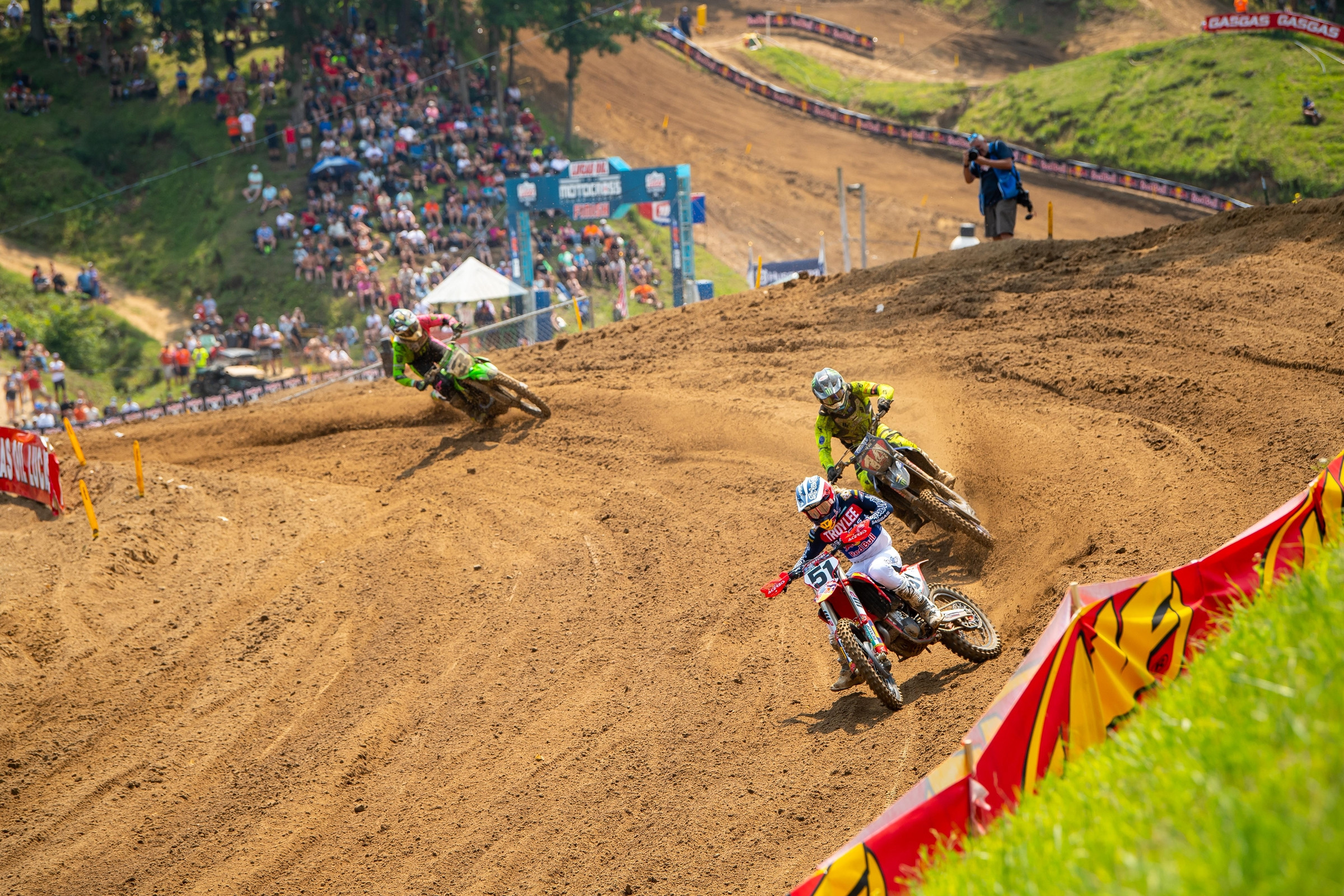 Long-time pro Jason Thomas was on hand for Saturday’s Spring Creek National right in the middle of a wild few weeks of travel. With so many storylines and championship related drama from the weekend, we fired some questions JT’s way to pick his brain about some of the crucial moments.

How impressed were you when Justin Barcia held off pressure from Dylan Ferrandis and Eli Tomac—and really Adam Cianciarulo early, too—to take that race win in moto one?

It was a very impressive ride on many levels, most notably in his ability to hold off Ferrandis late in the moto. We haven’t seen that very often this season. Once Ferrandis gets you in his sights (danger zone), it’s usually a foregone conclusion that he’s going to make the pass. As we know, though, one of Justin Barcia’s greatest strengths is riding aggressively when needed. He can anticipate moves before they happen and position himself to take away passing angles. In that aspect, it makes sense that he would be the one to hold Ferrandis off. It was very surprising that he had the pace to stay there both motos, though. I didn’t see that coming.

For Barcia to back it up, get the overall win, and then for Michael Mosiman to have a career best day as well, it was quite the day for the GasGas squad! What impressed you from Mosiman (besides him catching and passing Cooper)?

This ride from Mosiman is overdue. He has been fast and has been near the front. The issue has been his inability to avoid costly mistakes. There have been a handful of motos where everything was setup nicely for a podium finish. When the opportunity is there, though, you have to execute. I wasn’t surprised by the speed or any other aspect, honestly. He just finally made good on the potential he’s been flexing.

Eli Tomac was able to turn around his first moto issues this week even after braking behind the big pileup in the first turn. What was Tomac doing differently than everyone else that allowed him to keep dropping 2:10’s lap after lap?

He’s Eli Tomac! I am much more surprised when he finishes 5-10th than I am when he cuts through the field. When he’s on, he’s more aggressive than every other rider on the track. He’s on the gas earlier in the corners and carries more speed through rough sections. Spring Creek is historically a good track for him, so I was more surprised with the second moto struggles than I was the first moto rally.

After that first moto, his ride in the second moto seemed kind of underwhelming. Did he exert too much in moto one, resulting in a lackluster moto two?

I guess, but that’s never really been an issue for him in the past. I am not sure why, but I have seen him look fatigued at times this season (Orlando comes to mind). Other times, though, he has been an absolute beast in the second moto (High Point, Red Bud, Southwick). I don’t know what to make of it but it’s something I have noticed in the last year or so. A couple of years ago, it didn’t seem to matter how much energy he expended at any point. He was so much stronger than everyone else and it showed.

Can you please try to explain 1) How Jeremy Martin was mentally and physically able to push that hard going down Mount Martin to pass Justin Cooper without missing the turn? And 2) What emotions you were experiencing as you were watching this happen? If that move doesn’t raise your heartrate, I don’t know what will!

Familiarity helps. Jeremy and Alex Martin have surely gone down that hill more times than anyone else alive. Knowing the limit would give him more confidence than Justin Cooper would have. I also think J-Mart was running off pure adrenaline at that point. The crowd was going absolutely bananas. Riders are often willing to push the edge in that environment.

Ken Roczen used the far outside of the turn going up Mount Martin to take over the race lead from Justin Barcia. How did this line work?!

I chalked this up to the track maintenance in between motos. That outside line was built perfectly for a high-speed run. The berm didn’t have any hooks in it and could still be trusted being the first lap. Roczen must have seen how nicely it was groomed on the parade lap and went full send mode. Barcia took the inside line which is generally the safer line to protect against a pass but when a section of the track has been completely rebuilt, sometimes that logic doesn’t pan out.

How big was the #94’s win in the second moto? In terms of saving his day after losing so many points in moto one.

In the simplest terms possible, it kept his championship hopes alive. He was down 41 points going into that moto and was able to claw 9 back. If he isn’t able to ride (or even rides poorly), his championship would have felt finished. He’s still up against it being 32 points down but there’s still hope now.

How impressive was this 1-1 ride by Jeremy Martin given everything he’s been through this year? Did home field advantage play into his favor here?

He rode incredibly well but we also have to think there was some home cooking to credit. Regardless, that had to feel great. He has been through the wringer this year both indoors and out. Let’s see if he can use this momentum to springboard into the second half of this series.

This is awesome to have six different winners in the 250 Class in six rounds. Plus, the championship lead changes hands at the halfway point. We couldn’t have scripted a better start to this championship!

The parity in both classes is at an all time high. I am hoping we can get even more first-time winners because we definitely have the potential for more. Riders like Plessinger, Webb, and Sexton are all right on the edge of a breakthrough. We could literally have 5 and 6 rider battles for the lead. It’s really cool to have the gate drop and not know who will win or even be on the podium.