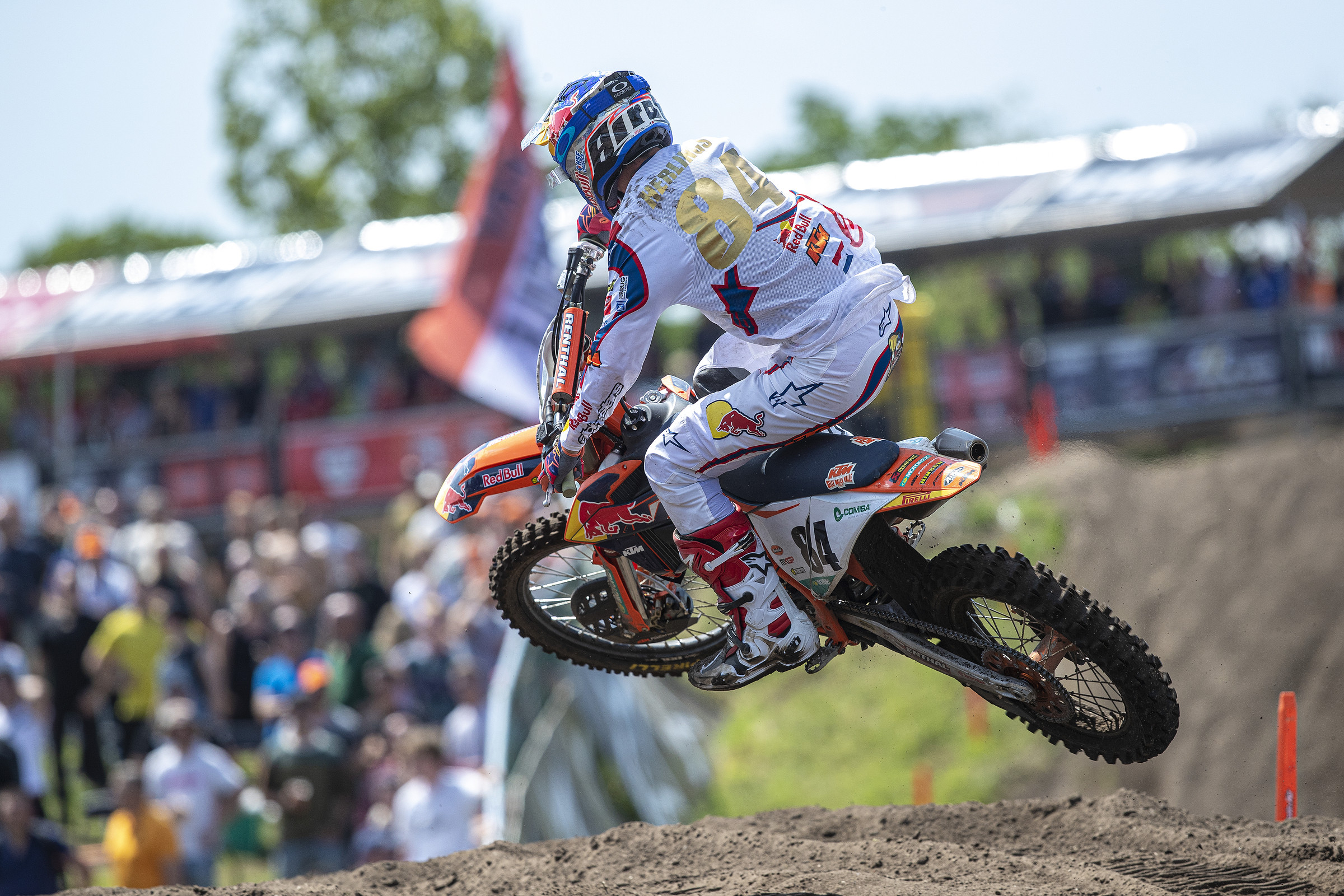 GP Report Talking Points from the Grand Prix of Netherlands

Under stifling Dutch sunshine, World Champion Tim Gajser posted a 3-2 for his second Grand Prix win from the four so far in 2021 and increased his lead over a three-way tie for second in the FIM Motocross World Championship (MXGP) standings between Tony Cairoli, Jeffrey Herlings, and Romain Febvre. The Slovenian rode his way back into the top three after a ‘quiet’ seventh at the previous round in Italy. Despite the HRC man’s competitiveness in the sand, as well as Monster Energy Yamaha’s Glenn Coldenhoff’s class-leading speed, Monster Energy Kawasaki’s Febvre and his captivating balls-out approach, Red Bull KTM’s Jorge Prado’s progression and Cairoli’s age-defying resistance, it is still Herlings that hogs the principal narrative of MXGP.

How? The 26-year-old wedged enough drama into 35 minutes to accommodate half a season of talking points. After taking his third pole position from four in timed practice, Herlings, looking bright in the new 2022 Alpinestars SuperTech gear, ripped a start in the first moto. Perhaps it was too quick for the KTM 450 SX-F holeshot device that remained stubbornly engaged out of the second turn and through the waves as the Dutchman edged across the final lip and was promptly landed on by Febvre’s teammate Ivo Monticelli. Somehow Herlings stayed upright and on the bike while the Italian—somewhat reckless in the busy section—tumbled. Herlings gingerly circulated in fourth place. At one point he was eight seconds down on countryman and pace-setter Coldenhoff. The Oss layout got rougher and rougher and more and more physical. But then Herlings was able to rally and his narrowing proximity to the trio ahead created some fantastic scenes that had the circuit in rapture.

The contest was close for a while and Oss wasn’t overly generous with overtaking opportunities for a sand track, as evidence by Febvre’s level of near-desperation in trying to demote leader Coldenhoff.

Shirt stained and marked from the landing by an errant Kawasaki, Herlings was suddenly unstoppable, even if he didn’t look quite a free-flowing as usual in his preferred terrain. His performance echoed the 2019 Grand Prix of Latvia where a freak crash on the sighting lap of the first moto led to a cracked ankle, but he still managed to triumph before pulling out of the GP and vanishing for six rounds to recover from what was his second injury setback that year.

“When I took the lead I thought ‘It’s hammer-time, let’s go’ but I almost couldn’t hold on for the last three laps,” he said Sunday evening. “As soon as I crossed the finish line, I knew something wasn’t right. I’ve broken a few bones in my time and I thought something was wrong. The CT scan then showed the break.”

A small crack in his left shoulder blade was a new addition to the long list of woe. Although it was by no means the most serious injury he’s had, another check-up in Belgium on Monday will determine if Herlings has to make the agonising decision to sit-out more Grands Prix.

Cairoli, who was exceptional in the second moto and proved he still has more resilient conditioning and stamina at 35 than many of his younger peers, said he was “surprised” that Herlings could finish the moto with the injury but also pointed out the difference between the chemicals that pump with the heat of competition and then the cool calm of post-race when aches and pain feel more pronounced. The third KTM rider, Jorge Prado, who was fourth overall and led 13 of 16 laps before admitting he was ‘done’ in the second moto said, “I don’t think there are many riders that can do that” in a rare display of awe among rivals.

What happens now? Herlings went from placing his fingers on the red plate for the first time this season to conceding 17 points to Gajser and putting his participation in next weeks’ Grand Prix of Czech Republic into the air, like the sandy roost he repeatedly flicked skywards at Oss. The circumstances of the incident were quite incredible and led to another twist in Herlings’ eventful career that is still relentless in terms of mixing inspiration, brilliance and amazement with despair and commotion.

-Oss welcomed MXGP for the first time this century and since last hosting a Grand Prix in 1998. To describe the build-up to the meeting—the first of four in a row now—as turbulent would be an understatement. The region had been hit by torrential rainfall the previous week that caused tragic and devasting flooding to nearby zones in Belgium and Germany. The persistent threat of the pandemic and the spread of the Delta variant caused the Dutch government to re-impose restrictions on events and gatherings that threw the status of the Grand Prix into peril less than a week before the paddock gathered at Oss. Discussions were held, and numbers were limited with some (frankly baffling) rules such as each member of the public requiring a seat to enter. No standing and watching as per Covid rules, apparently. Still, the site looked busy as the fans basked in the mini-heatwave that followed the stormy prologue. Oss, with shallow sand similar to the Eurocircuit in Valkenswaard, was an apt stage for the specialists and provided some close racing. Overall, the Grand Prix was an example of how sports events can still triumph over the odds. The riders were split in their opinions of the site. Cairoli, who first raced in Grands Prix in 2003, admitted he hadn’t ridden there. “The track is nice but there are better facilities than this in Holland,” the runner-up said. “This place has character and the atmosphere was good but they could work on the track a bit more and make it wider to be easier for passing.”

Jorge Prado, who spent his longest stint at the front of MXGP in just his second season on the 450, emphasised how rough, bumpy, and sapping the surface turned out to be at Oss. The curling nature of the layout also meant it was tighter compared to venues likes Valkenswaard and Lierop. “You couldn’t just hang off the back of the fender and wheelie all the bumps,” the Spaniard commented on the sand. “The bumps were strange: it was a track without rhythm.”

-Too many mistakes from Romain Febvre. The Frenchman is right in the title hunt as rumours persisted throughout the weekend over the future of the Monster Energy Kawasaki Racing Team with the paddock potentially facing a shuffle of brands and squads for 2022. In the race itself Febvre picked up his second podium finish this season despite two errors in the first moto and another in the second when he was lucky to re-enter the track after jumping off course and into the fencing. The 29-year-old is one of the fastest riders in MXGP at the moment but needs to stop conceding points, and make life easier for himself. He’s arguably at his most competitive since the first half of 2016 when he was defending world champion and before a concussion at the British Grand Prix ended his entertaining duel that season with Gajser. “I feel that it was my GP, it’s always hard to say that but it was true,” Febvre said on Sunday afternoon. “I was faster but couldn’t pass on that difficult track. I need to avoid these mistakes.”

-MXGP rookie Ben Watson continues to make swift progress in the premier class and his fifth overall at Oss will have alerted other teams and brands to the Brit’s contract status for 2022 and beyond. Watson scored just one point on his 450 debut in Russia but then switched gears to place overall in Russia and Italy and then hit the top five ahead of his two teammates in Holland. Watson was the standout athlete in MX2 towards the end of the 2020 season and the tall rider was expected to be a better fit on the bigger machine. Although he insists the campaign ahead is about learning the intricacies of racing the 450 in Grands Prix against a much deeper field, Watson is giving the UK some much-needed presence at the sharp end of the world championship.

-Watson’s teammate, Glenn Coldenhoff, left the comfortable and formidable confines of the Standing Construct team and signed for the Monster Energy Yamaha team for 2021 for what appeared to be a lucrative deal for the ultra-professional Dutchman. In one sense it was a strange move after the 30-year-old looked so competitive on Austria machinery in the last three years and there was a brief alarm bell at the season-opener in Russia when Coldenhoff could only finish 17th. Since, #259 has since harnessed the finer points of the YZ450FM and finished on the podium in Italy and was a resolute front-runner at Oss. His second position in the first moto was unfortunately undone by a first corner crash in the second where he was unlucky not to be injured as the pursuing pack charged over and through him. The incident instantly sucked the air out of the expectations the home fans had for a native GP win. He went 2-22 for 12th overall.

-In MX2 Monster Energy Yamaha’s Jago Geerts gained substantial ground in the world championship with the second 1-1 of his career and the first win of the season. The Belgian seems to have made satisfactory improvement with his knee injury, and after failing to breach the top six in the first four motos of the year he suddenly produced an authoritative double moto haul. The 50 points lifted him to sixth in the championship and just 24 points from the peak of the table. World Champion Tom Vialle still has not recovered from his fractured right hand and rather than attempt laps at Oss - as he had done in the UK and Italy - the Frenchman elected to give the bone another week to heal and try a return in the Czech Republic. Vialle, who swept the first round, is now 91 points behind Geerts’ teammate Maxime Renaux (fourth overall) who is the fourth red plate holder in four rounds.

-The Rockstar Energy Husqvarna MX2 team had the double joy of both Australian Jed Beaton (second) and Dutch teenager and rookie Kay De Wolf (third) on the podium for what was a special day for the crew backed by a major Dutch sponsor, Nestaan. The trophies were not only the first for the respective riders this season but—for De Wolf in particular—a milestone. The 16-year-old was negotiating just his fourth GP as a full-time member of the class and although he had local knowledge and the noisy support of the fans as he memorably charged after Geerts until the last lap of the second moto, this was still a statement of intent from another Dutch youngster to come through the ranks. Beaton, in his last year in MX2 and initially hoping to be a title contender, boosted his points tally to wriggle up to the edge of the leaderboard in the standings. The likeable Aussie is now just 32 from Renaux after recovering from the crash and DNF at the British GP last month.

-MXGP rattles into three more events on the spin with hard-pack (Loket, Czech Republic), shallow sand (Kegums, Latvia, a ground similar to Oss in some ways) and then the sandy reference for them all, Lommel in Belgium.