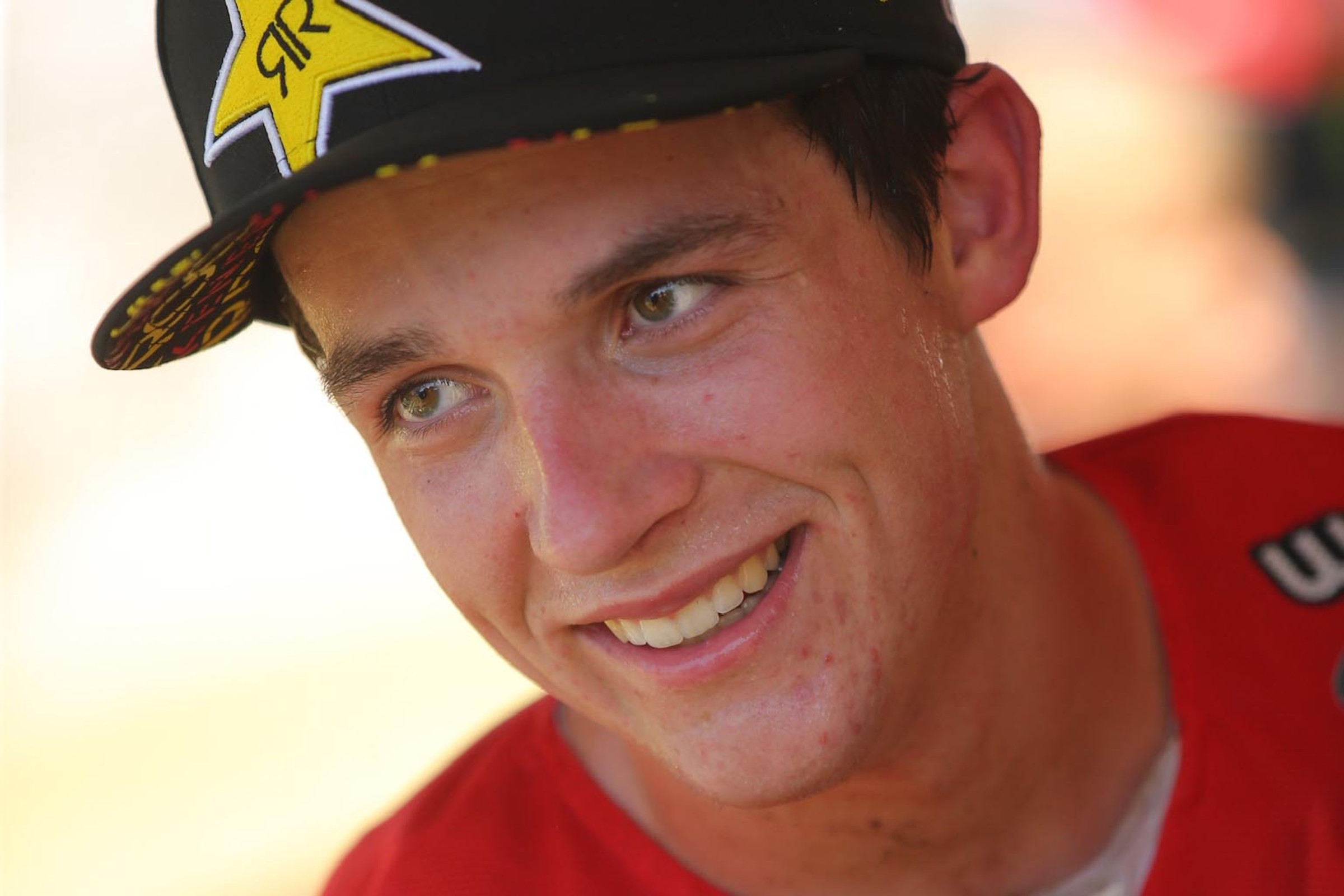 Rockstar Energy Husqvarna's Stilez Robertson took control of the Pro Sport divisions this year at the 2020 Monster Energy AMA Amateur National Motocross Championship. After taking the first Open Pro Sport moto win, Robertson overcame adversity in the second Open Pro Sport moto on Thursday when a race official was standing in front of his gate just seconds before the start of the moto, motioning toward a rider that was asking for more time. As the card turned sideways, the official moved just in time as Robertson grabbed his clutch, kicked up into gear, and the gate dropped. He didn’t get the start he needed as Rock River Yamaha’s Mason Gonzales jumped out to another holeshot and began to run away.

This was actually the second time during the week where Robertson faced chaos on the start. He nearly holeshot the first 250 Pro Sport moto of the week, but as the pack pinched toward the inside of turn one, he caught his shifter on a bale and broke it. Stilez didn't want to make excuses and didn't tell anyone on the podium, after he had finished second to BarX Suzuki's Dilan Schwartz.

In this open moto, with the starting gate incident, Robertson regrouped and put in a great charge up to sixth by the end of the first lap. He eventually climbed up to second, but he ran out of time, as Gonzales barely held him off by 0.719 seconds.

It turns out the only motos Robertson didn't win where the ones with starting issues (broken shifter in one, weird gate drop in the other). On Friday, Robertson got off to a better start in the final 250 Pro Sport moto, where he took the checkered flag. After going 2-1-1 in the 250 Pro Sport class for the overall and finishing his photos and podium speech, the Husqvarna squad showed Robertson his pro license and told him he would be racing next weekend’s first ever Loretta Lynn National, the first round of the Lucas Oil AMA Pro Motocross Championship.

But his work this week at the Ranch was not done just yet.

The final Open Pro Sport moto still loomed, with a showdown between Robertson and Gonzales. Gonzales had been a holeshot master all week, but this time he started behind Robertson. Motivated with a title in his sights, Gonzales got on the move. The title rivals entered the Ten Commandments side-by-side on the first lap and whoever would come out clean would have the lead. Robertson had the inside of the turn coming in as Gonzales shot wide but Gonzales came out with the lead after Robterson bobbled. Gonzales then put about a second or two on Robertson by the end of lap two. In a pressure moto, he was putting in his best work

Robertson put in another charge. On the third lap, Robertson caught up to Gonzales’ rear fender but a few sketchy moments—including jumping wide on an inside roller in a turn that caused him to miss the turn—gave Gonzales a gap. Gonzales had a few slip ups of his own and the gap lessened as Robertson closed back in. These young talents were pushing to their limits, and then Robertson made a pass for the lead on the fourth lap and never looked back, putting in the fastest lap time of the moto in on the seventh lap: a 1:50.664. The most impressive part of his ride in the final moto of his amateur career? Catching Gonzales, who was on a Yamaha YZ450F, while on an FC 250—for the overall.

Rockstar Energy Husqvarna’s Stilez Robertson finished 2-1-1 for first overall in the 250 Pro Sport at @lorettalynnmx, then the team announced he will compete in the first ever @promotocross Loretta Lynn National next weekend. #ProMotocross#Motocross#LetsTakeItOutside

“I was having fun,” said Robertson, whose 1-2-1 bested Gonzales’ 2-1-2. “I knew he was going to be hard on the 450. Ah man, I was making mistakes at the beginning, I was overriding, and I was like, ‘Dang it, he’s getting away!’ But I calmed down and started hitting my lines and it was a lot of fun. Shout-out to Mason, that was fun every moto with him, battling, he always got good starts. It was fun, we fought for it and it was a great way to end the amateur career here at Loretta’s.”

A four-time minicycle champion at the Ranch, Robertson went on a bit of a title drought since the winning in 2014 in 85 (9-11) class. He even missed the 2018 event all together with an ACL injury. At last year’s event, Robertson returned to the center of the podium in the 250 B class over Jarrett Frye, Dilan Schwartz, and Gonzales. Frye was able to top Robertson in their other class last year, and they didn't have a chance to rematch with Frye headed to the pros (and then Frye tore his ACL earlier this year, anyway).

After Loretta's last year, Robertson, a long-time Kawasaki Team Green rider, signed a deal with the Rockstar Energy Husqvarna team for 2020 and through his first full pro year in 2021.

Several times during the week at Loretta's, Robertson was asked about stepping up his performance in 2020. He would answer with: "Baker's Factory."

While Aldon Baker oversees the 250 operation, Robertson and other young riders work directly with trainers Mike (forever gnarly) Brown and Seth Rarick. They get to ride with top pro racers. The program hasn't worked for all, but it certainly helped Robertson up his game this year.  With his performance, Robertson was awarded the coveted AMA Nicky Hayden Amateur Horizon Award, which goes to the A-level rider with the most potential heading into the pro ranks.

“It’s crazy, you start here on a 50 and you’re like, ‘Oh, I want to race the pro class one day,’ and then you’re here and you’re like, ‘Wow, it seems like yesterday,’ so it was weird honestly,” Robertson said on the podium. “But it was great through all the ups and downs, it made me who I am today so I’m thankful. …It’s been great and I’m ready to start it off next weekend.”

Riders turning pro following Loretta Lynn’s is nothing new, but for the riders making the jump this year, their first pro event will be at the track they’ve been racing on since a young age. Like Robertson and Schwartz (who made the announcement earlier this week), Gonzales will make his pro debut next weekend at the opening round of the Lucas Oil AMA Pro Motocross Championship.

“He put up a great pace, man, the kid’s rode good all week, so kudos to him,” Gonzales said of Robertson after their final Open Pro Sport moto. “I’m happy with this week, I feel like it went well, I was very consistent. I wish I had a few more better rides but that’s the way it goes and I’m looking forward to making my pro debut next weekend here.”

“And hopefully get me a start or two,” he continued.

MX Sports Pro Racing (in charge of the Lucas Oil AMA Pro Motocross Championship and sister company to Racer X) has said there will be changes to the track to increase the lap time and to slow down several sections, but for the most part the track will remain the way it is. With so many elite riders in the 250 Class already, it will be interesting to see how these three young riders will do in their debut in the pro rankings. Especially since it will happen at a track they are all too familiar with.