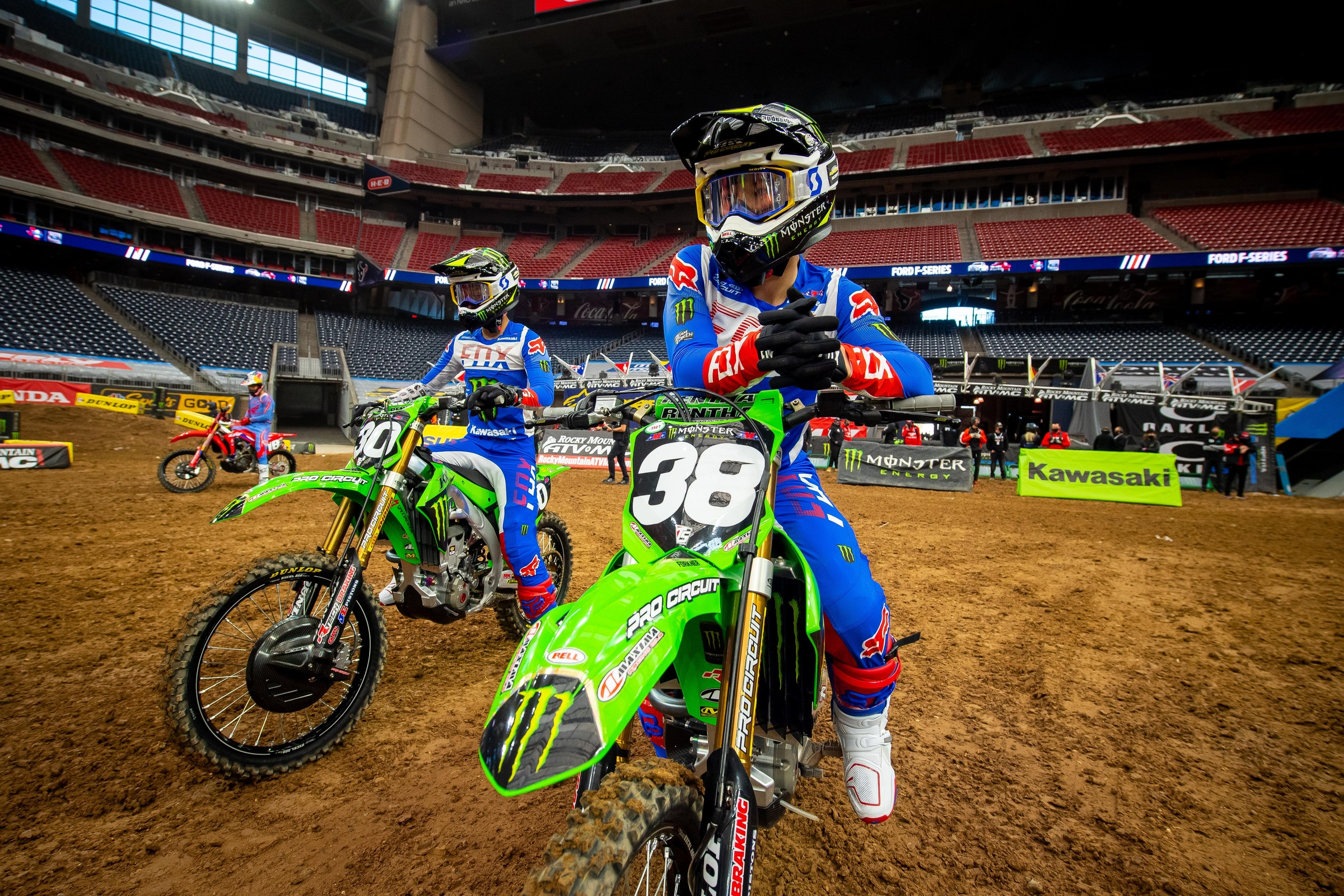 It’s been a bit of a rough road for Monster Energy/Pro Circuit Kawasaki racer Austin Forkner. Easily one of the fastest, most talented riders to come out of this nation in the past half decade, the last few years have been riddled with injuries for the kid out of Richards, Missouri. His Monster Energy AMA Supercross Championship attempts have gone down, literally, with big hits, and his last Lucas Oil AMA Pro Motocross Championship run took place all the way back on August 25, 2018 at the Ironman National (where he placed sixth overall). The last supercross main event he lined up for—Houston 3 on January 23, 2021—concluded with a crash and a badly broken collarbone. Once again on the sidelines and looking in on what will be the conclusion of the Monster Energy AMA Supercross Championship this weekend, Forkner is now gathering up the ammunition for what he hopes and plans on being a serious assault on the 2021 Lucas Oil AMA Pro Motocross Championship.

“Damn, whenever I don’t race, or whenever I haven’t been racing as much, like it has been for me the last couple of years because of injuries, it makes me want to race every chance I get because at the end of the day, I’m getting paid to race my dirt bike, not just ride my dirt bike,” sighed Austin Forkner this week while taking a breather from his formidable pre-Pala physical fitness and testing program. “It all makes me want to race every chance I get because that’s ultimately what I’m being paid to do. I want to race and I do want to win. I’ve always kind of been like that. We’d go to practice tracks or whatever and there would be guys faster than me or whatever, but then come race time I always seemed to figure it out. I’ve been told that numerous times and it seems like I’m more of a racer. I mean that’s just another reason why, yeah, I do want to go racing! I think that I am a racer. That’s what I want to do, obviously.”

To those who may be reading this piece, you may have taken note of the compelling interview Racer X Illustrated senior scribe Jason Weigandt put together with Forkner on April 7, 2021. In that interview, Forkner was remarkably candid about himself, his current reality and just what he thought his future might hold. I asked him about all of it.

“I’m fine, I guess,” he answered when asked how it was all going. “It’s not the end of the world. It’s another injury and more missed races and another possibly missed championship, or whatever. That’s the truth. I don’t usually sugarcoat things for myself to make myself feel better and I don’t expect anybody else to do that. That’s what my chick does or my mom does or people in my family do. They’ll be like, ‘It’ll be okay. It’s just a race.’ Yeah, life is ultimately going to go on whether I win a race or not or whatever, but I’m going through it again. I got hurt and it’s another missed opportunity, another group of missed races, another win bonus I won’t be able to earn. People don’t always really consider that we have a short career in this sport. All the money that we can make during this career is important. That money comes from winning races and winning championships and doing that stuff. I want to win races and it’s not always about the money, but this is my job. It is a little bit about the money and I’m missing a chance to make more money and to just be out there and that’s what sucks. I don’t sugarcoat it and I’m hard on myself that way. I’m like, ‘You know you blew it again. You missed another opportunity to win races and possibly the championship’ As soon as it happened, man, there is nothing anybody could say that could compare with what I said to myself. I was so hard on myself. I’ve always been like that. I’ve always been self-motivated and there is nothing anybody is going to tell me to do or to not do. If I want something, I’m going to work hard to get it. I’ve never needed somebody to sit there and yell at me and be on the side of the track yelling at me. I want to win. I want to be successful. I’m just hard on myself. I guess that’s a good thing in some ways and a bad thing in other ways. Whatever I say to myself, I listen to more than any other person. I’m the best one who can cheer myself up, or one of the best at bringing myself [down] and saying to myself, ‘You’re an idiot and why did you do that? That was stupid!’ I can be the biggest negative person on myself. I guess I’m very self-motivated and hard on myself and I feel like every successful motocross racer is hard on themselves. You have to be hard on yourself. That’s how it has to be. You have to want it in yourself. Not for the team, not from this person, you have to want to do it for yourself.”

Still, one thing, and certainly the main thing Forkner has going for him is that he absolutely, positively knows he is capable of winning on any given Saturday in American racing.

“Yeah, exactly. And that’s kind of what I said in [Jason] Weigandt’s interview a little bit. You know you can still do it, but until you do it, that confidence you have is just not as strong. You might know that you can win, but until you do it, and then when you finally do it, it’s like, ‘Game on! Let’s go!’ That’s just how it is. You can even see that with guys over the past couple of years. It just reflects. As soon as Cooper Webb got on KTM a couple of years ago, he started winning. It changed him. He started winning and he won the championship. It was just like that. You could see the confidence. It takes getting that one good result and that’s all it takes sometimes to skyrocket you into a bunch of race wins or a championship or whatever. One race can make a difference, it can, and I’m hoping that it comes for me as soon as Pala. I’m hoping that I go out there and kill it and get that result. I don’t really have a solid result I’m looking for at Pala because it has been two full seasons since I’ve raced outdoors, so it’s not like I have to go out there and win. I’m not really entering with that approach. It’s more like, ‘Okay, let’s get back to outdoors. Let’s get a solid finish from the first round..’ You know, you set goals for yourself at every year or even every race. You set little goals and you start to accomplish those goals and you start to gain that confidence and it just builds and builds and builds and the next thing you know you are winning races and getting the results that you’re looking for consistently.”

The 2021 Lucas Oil AMA Pro Motocross Championship is now only a few weeks out. Forkner has been crossing the days off his calendar in an effort to get down to Saturday, May 29 and out to a place named Pala.

“Yes, I’m definitely motivated for the outdoors,” he says. “I wouldn’t say that I’m more motivated than ever because I’ve been motivated to win since I’ve been pro, you now? I’ve been motivated to win my whole career. I want to win so bad! I’m tired of beating myself up. I’m tired of not getting the results that I want, so yeah, I’m definitely ready to get back to racing and, honestly, to just get through an outdoor season again. It’s been a while since I’ve even raced outdoors, so I’m excited just to be able to do that! I want to win.”

And as far the competition he’ll square-off against beginning with what will be a High Noon shootout out at Fox Raceway at Pala in So. Cal?

“Yeah, Jeremy Martin is a two-time champion,” started Forkner. “It’s hard to say that he is not going to be a title threat. He’s been good. He was solid that year. He barely got second to Dylan Ferrandis. I think he’ll definitely be good. Justin Cooper was pretty good last year. He’s had some good rides outdoors. Who knows? But yeah, I’d say it’s pretty much a shoe-in that Martin is going to be good. I’m hoping that that I’ll be a title threat and I’m sure there will be other guys mixing it all up. It could be a few guys.”

Ups, downs, broken bones and even a broken heart, Austin Forkner wears his racing heart on his sleeve, has his own way of doing and seeing things and wants nothing more to get back out there and let his racing do the talking.

“I’ve seen interviews with guys that I know well behind the scenes and I also know the person that they kind of portray to be with podium interviews or whatever,” he says. “I’ve always said to myself, ‘I don’t want to be that. I don’t want to be fake. If you’re talking to me and you’re asking me questions, I’m going to answer them whether we are behind closed doors or not and I’m going to be the same person. I’m not going to be portraying somebody I’m completely not to just look good in front of cameras or whatever. That’s where some people have told me that I come off a little bit polarizing. It can be where some people love me or they hate me and that’s okay. I’m not trying to be every single person’s favorite rider, I’m just being myself and some people like that and some people don’t. That’s the great thing about this sport. People have favorite riders and people have riders they don’t like. That’s perfectly okay. I’m just real. Some people tell me that I’ll never be anything and that I should quit and some people will say, ‘You know, you’ll get through this and we still believe in you.’ Both of those are fine. I understand both sides. I’m just me and if you like me, that’s awesome. If you don’t, that’s your opinion.

“Even with this last injury, that’s what’s been really tough about it. When I tore my ACL and I lost that championship, or last year when I destroyed my insides, I was like, ‘You know, there is a light at the end of the tunnel. When I do get that result, or I get that win, or I get that championship, it is going to be way more satisfying because what I went through.’ I’m good now and I’m back to riding and I feel solid on the bike. We’ve got the bike working good outdoors, so I’m ready to go into the season and mix it up with these guys.”