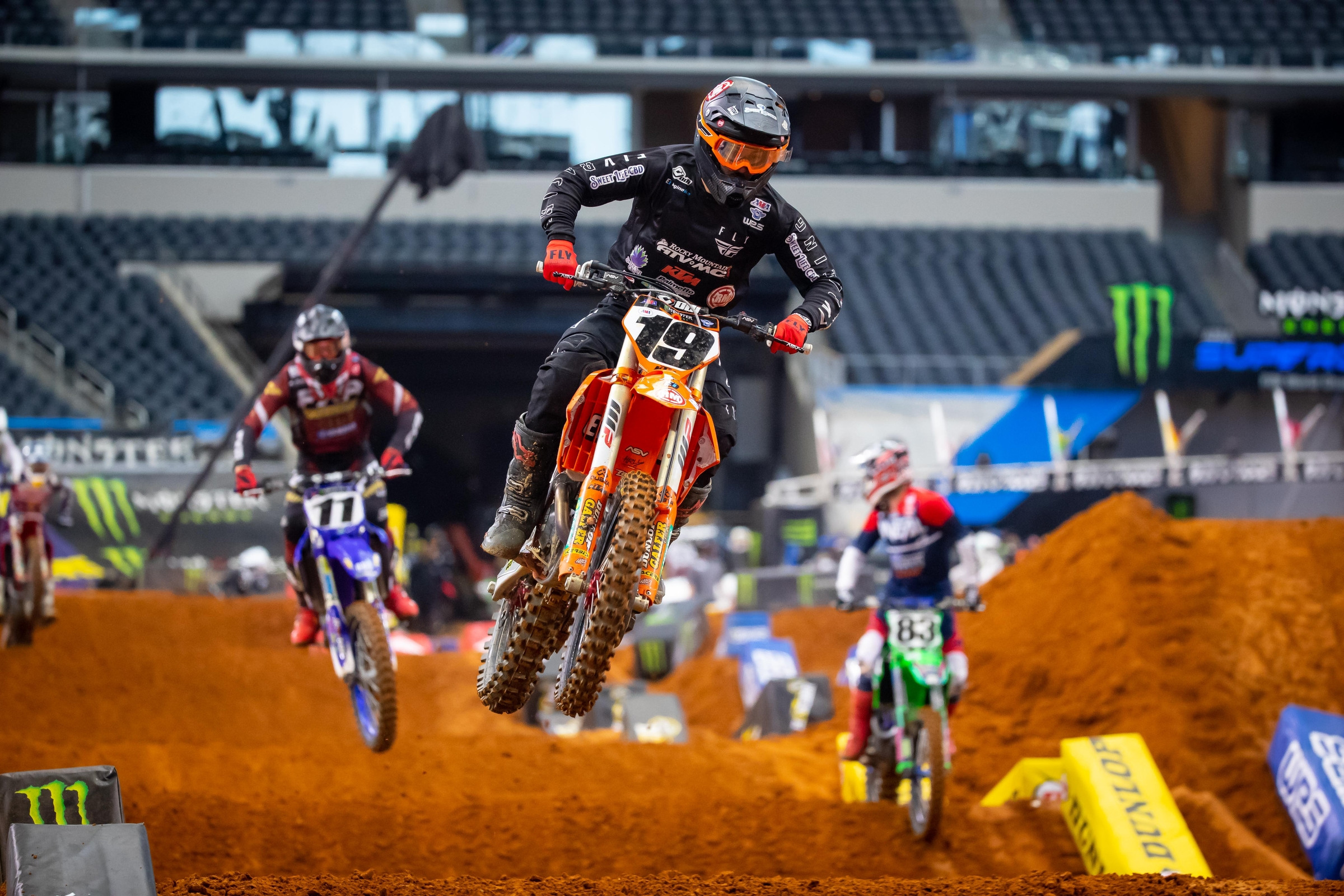 Round 13 of the Monster Energy AMA Supercross Championship will take place on Saturday night in Atlanta, Georgia. Check out this report for an update on who’s injured.

Comment: Bloss will return to racing this weekend after sustaining a foot injury at Arlington 2.

Comment: Bogle has been dealing with an AC separation. He’ll ride this week to determine how he feels, but right now the plan is for him to race.

Comment: Brayton will miss the rest of the season with a broken right hand and broken left wrist after going over the bars at Arlington 2.

Comment: Cianciarulo is out for the season due to a broken collarbone suffered at Orlando 2.

Comment: Enticknap is back after suffering a broken collarbone at Orlando 2.

Comment: Harlan is healing up after a crash at Daytona resulted in a small brain bleed, broken left elbow, broken wrist, and rib and lung injuries sustained at Daytona. He’s out for season.

Comment: McElrath will miss the rest of the season with a strained back.

Comment: Musquin bowed out of the main after hurting his wrist at Arlington 3. At time of posting Red Bull KTM hadn’t responded to our inquiries on Musquin’s status for Atlanta 1.

Comment: Osborne had hoped to return to racing in Atlanta after suffering a back injury before Orlando 2, but has now elected to sit out the remainder of supercross to focus on preparing for his title defense in Lucas Oil Pro Motocross.

Comment: Politelli sustained a concussion and AC separation in Daytona. He’d hoped to return for Atlanta but he still isn’t quite ready.

Comment: A broken wrist, fractured sternum, and two broken ribs suffered during qualifying at Indy 3 will keep Stephenson out of action for the rest of supercross.

Comment: Alix is out for Atlanta due to a back injury. There is no timetable on his return.

Comment: Brown had surgery after breaking his hand at Arlington 1. However, he’s still going to try to race this weekend.

Comment: After breaking his collarbone in Orlando at the season opener, Cantrell is expected to make his return to racing this weekend in Atlanta.

Comment: Castelo is out for the rest of the season due to a hand injury. He’s had surgery and is in the recovery process.

Comment: Crown was set to return to racing in Atlanta, but a crash during practice during the week will keep him out of action.

Comment: Gardner will miss the rest of the season due to a compression fracture in his lower back and an inferior pubic fracture in his pelvis. Earlier this week he told us he’s got roughly a month left of recovery time.

Comment: A broken tibia/fibula and talus will keep Gonzales out of action for the season.

Comment: Martin had an MRI on his left wrist, which revealed a fractured carpal bone. He’s out for the remainder of supercross.

Comment: Martin is out for the remainder of supercross after dislocating his left shoulder at Orlando 2.

Comment: Robertson sustained an ankle injury at Arlington 2. He’ll be back in action in Atlanta.

Dilan Schwartz – BANGED UP | IN

Comment: Schwartz will return to racing after missing the Arlington leg of supercross with minor injuries.

Comment: Smith crashed in Arlington and dislocated his shoulder. He’s out for the rest of supercross.

Comment: Forkner broke his collarbone in Houston but is back on the bike. However, he is out for the remainder of supercross as he shifts his focus to the Lucas Oil AMA Pro Motocross Championship.

Comment: Hampshire sustained a dislocated right wrist, a fractured metacarpal in his left hand, and chipped a bone (ulna) in his forearm during practice in Houston. He is out for the remainder of supercross as he hopes to be fully prepared for the Pro Motocross opener May 29.

Comment: Vohland crashed in the whoops during qualifying at Indy 1 and sustained a dislocated hip. The rookie is back on the bike but team manager Ian Harrison said Vohland will not race any of the remaining supercross rounds as he prepares for his Pro Motocross debut.