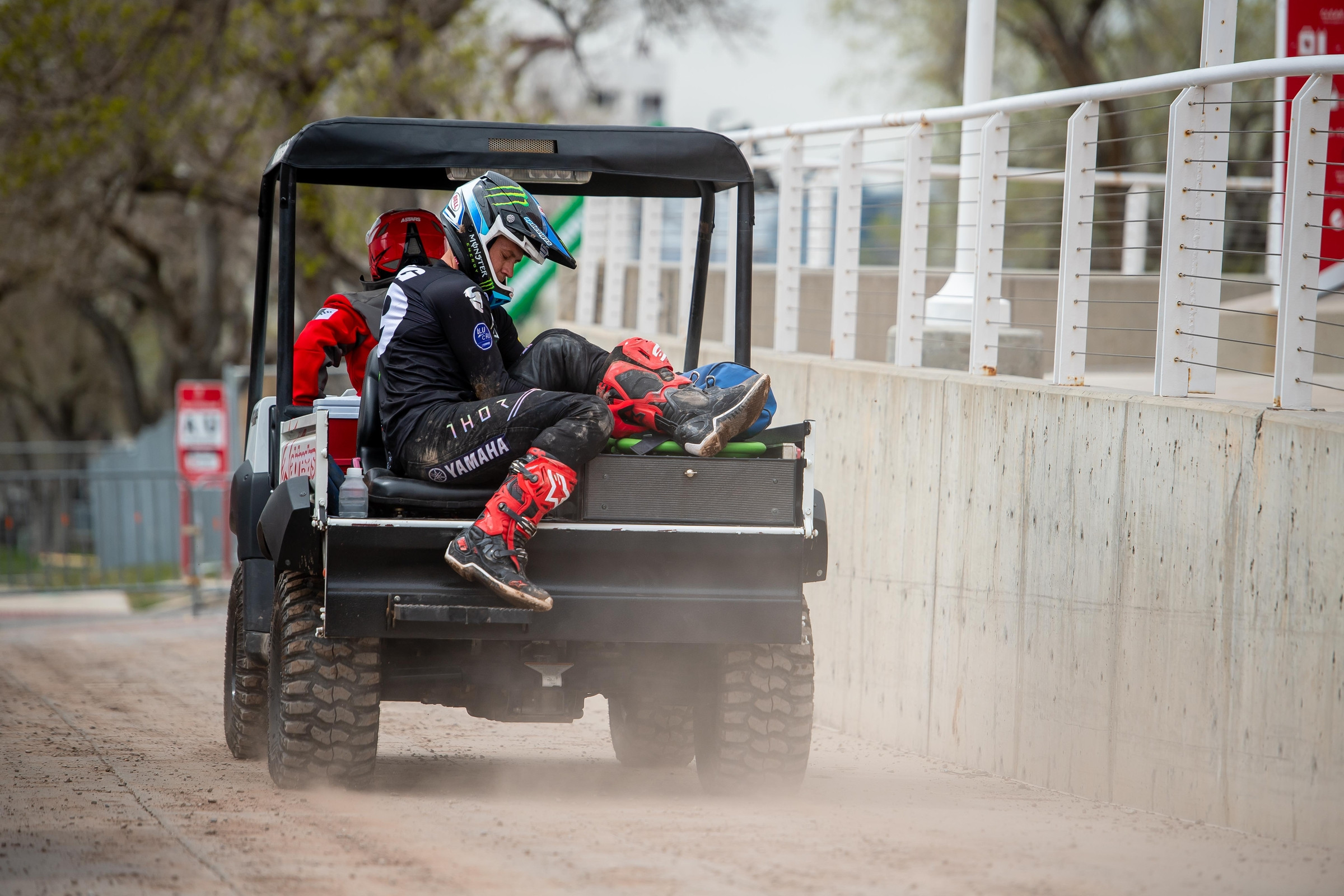 The final round of the Monster Energy AMA Supercross Championship will take place on Saturday night in Salt Lake City, Utah. Check out this report for an update on who’s in and who’s out.

Comment: Bogle is taking time to deal with a shoulder injury, and to make sure he’s fit for the upcoming season of the Lucas Oil AMA Pro Motocross Championship.

Comment: Brayton is out due to a broken right hand and left wrist.

Comment: Chisholm’s decision on whether or not he’ll be Chizzing at the finale will be a game time ruling. If he decides he’s not quite ready to get back to Chizzing on the track, he’ll still be at the stadium for the race.

Comment: Davalos announced his retirement from professional racing following a broken collarbone suffered on press day at round 16.

Comment: Friese is out with broken ribs suffered at Atlanta 1.

Comment: Osborne is working on being ready for Pro Motocross after hurting his back earlier this season.

Comment: Politelli is out with a concussion and AC separation.

Comment: Stephenson broke his wrist, fractured his sternum and sustained two broken ribs at Indy 3. He’s out for the finale.

Comment: Albright is out with a knee injury sustained in Indianapolis.

Comment: Forkner broke his collarbone in Houston and is working on preparing for Pro Motocross.

Comment: Hampshire sustained a dislocated right wrist, a fractured metacarpal in his left hand, and chipped a bone (ulna) in his forearm during practice in Houston. He is aiming to be healthy for Pro Motocross.

Comment: Harlan suffered a small brain bleed, broken left elbow, broken wrist, and rib and lung injuries in Daytona. His bone injuries have all healed and he hopes to begin prepping for the nationals soon.

Comment: Moranz did a few 450 races and unfortunately crashed in Atlanta. He suffered two broken ribs, a bruised lung, and a chipped scapula. He’s out for SLC.

Comment: Oldenburg sustained a broken ring finger and gashes on the top of his hand that required 14 stitches at Atlanta 2. He’s out for Utah.

Comment: Vohland is working on being ready for Pro Motocross following a dislocated hip sustained at Indy 1.

Dylan Woodcock – BACK | OUT

Comment: Alix is out for supercross due to a back injury.

Comment: Carroll is out for the season with a broken sternum, foot, and two ribs.

Comment: Castelo is out for the rest of supercross after sustaining a hand injury that required surgery.

Comment: Craig crashed in practice at SLC 1 and sprained his ankle and fracture is fibula. He’s had surgery and hopes to be back for the start of Pro Motocross.

Comment: Crown is out following a crash during the week before Atlanta.

Comment: Falk is out for the season with a broken femur.

Comment: Gonzales is out with a broken tibia/fibula and talus.

Comment: Marquier crashed during practice at Atlanta 1 and sustained a broken arm and concussion. He’s out for the remainder of supercross.

Comment: Martin is out with a fractured carpal bone.

Comment: Martin is out after dislocating his left shoulder at Orlando 2.

Comment: Mumford is out after injuring his shoulder at Atlanta 2.

Comment: Munoz is out for the rest of the season due to a tweaked knee suffered during qualifying for Atlanta 1.

Comment: Robertson is out with a dislocated the fibular head in his knee.

Comment: A dislocated shoulder suffered in Arlington will keep Smith on the sidelines in SLC.