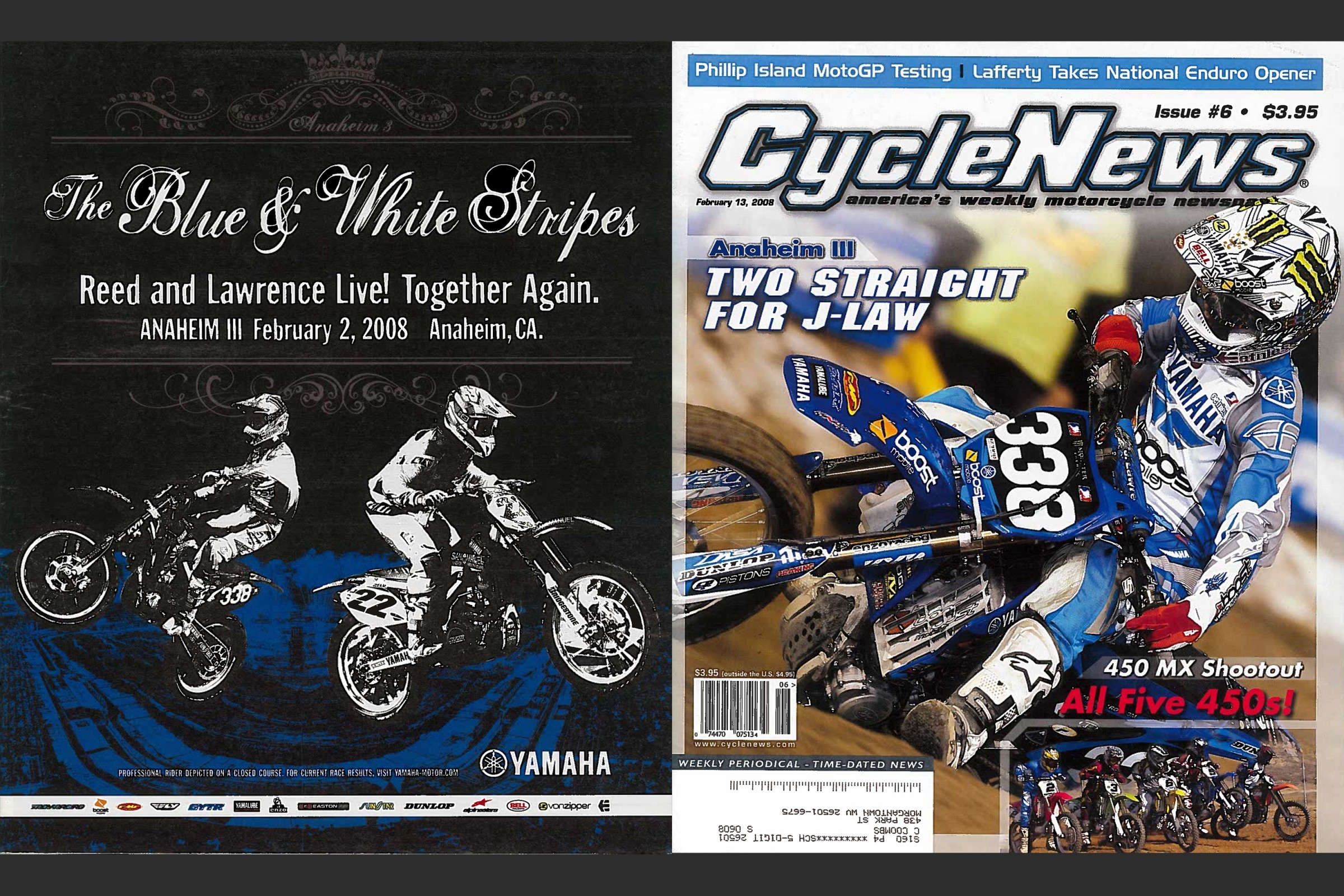 On This Day in Moto February 2

Two Yamaha riders in the middle of winning streaks—San Manuel Yamaha rider Chad Reed on the YZ450F and Boost Mobile/Yamaha of Troy's Jason Lawrence on the YZ250F—rode off with the wins at Anaheim 3. Reed, in the middle of a four-race winning spree, bettered Team Honda's Davi Millsaps and Monster Energy Kawasaki's veteran Tim Ferry. J-Law, riding #338 to three-straight wins, bettered Pro Circuit Kawasaki riders Austin Stroupe and Brett Metcalfe for the second win in the streak.

"I'd like to win five or six in a row but the series isn't that long," laughed Lawrence on the podium. "I hope to be up here every weekend for the rest of the season." Lawrence was feeling happy because his bitter rival, points leader Ryan Dungey of the Rockstar/Makita Suzuki team, crashed twice in the main and struggled to 11th.

And one rider missing from the race was reigning AMA 450 Motocross Champion Grant Langston. The Yamaha factory rider was having problems with blurred vision, thinking he had water in his retina.

"Unfortunately I've been struggling this week with blurred vision," Langston told Cycle News. "I've gotta go see a specialist this Monday. It kills me not being out there, but hopefully I will get this problem sorted out."

Sadly, Langston would eventually learn that what he had was cancer in his eye, and it would ultimately end his career as a racer. Langston is fine and healthy now and working as the color analyst for NBC Sports' coverage of Lucas Oil Pro Motocross.

Team Honda's Jean-Michel Bayle picked up his second AMA Supercross win of the series to keep pace with his teammate and rival Jeff Stanton at the Seattle Kingdome. On this night, Yamaha's Damon Bradshaw finished in between the two.

The 125 Class was literally a Hall of Fame podium, too: Jeremy McGrath beat his PEAK/Pro Circuit Honda teammate Steve Lamson and Yamaha's Jeff Emig for the Seattle win.

Red Bull KTM's Ryan Dungey got his first win of the 2013 Monster Energy AMA Supercross Championship at Angel Stadium (Anaheim 3), stopping a two-race winning streak for defending champion Ryan Villopoto. Rockstar Energy Suzuki rider Davi Millsaps finished second and continued to hold onto the points lead and red plate that he first grabbed with his win at the Anaheim opener. Team Honda rider Justin Barcia finished third to round out the podium; Villopoto struggled to eighth and remained fourth in the point standings, 17 down on Millsaps.

The 250SX class at Anaheim 3 was also won by a Red Bull KTM rider, this time Ken Roczen. As a result, the Austrian brand had its first-ever sweep of both classes in an AMA Supercross event, the history of which goes back to 1974. Martin Davalos ended up second on a Monster Energy/Pro Circuit Kawasaki, with GEICO Honda's Eli Tomac third.

After going 0-for-2 at the first two Anaheims of 2002, Team Honda's Ricky Carmichael finally got the Anaheim 3 win on his Honda CR250. RC was trailed by a couple of Frenchmen, Kawasaki's Stephane Roncada and Yamaha's David Vuillemin, the series points leader.

A couple of KTMs found their way to the podium in the 125 class as Ohio's Brock Sellards won, with California's Billy Laninovich third. Amsoil/Chaparral Honda rider Christopher Gosselaar finished in between the orange bikes. Kawasaki/Chevy Trucks' James Stewart continued his uneven results, this time crashing back to 11th one week after winning in Phoenix.

One week after failing to qualify at the Anaheim opener, defending AMA Supercross #1 Jeff Ward of Team Kawasaki won the 250 Supercross at the Houston Astrodome, topping the Honda trio of David Bailey, Ricky Johnson and Johnny O'Mara. Yamaha's Broc Glover would finish fifth.

The winner of the 125 Class at the Astrodome was Honda Support rookie Willie Surratt, who had finished dead-last just a week earlier in his first-ever professional race. Surratt was followed by Arizona Honda rider Robert Naughton and Kawasaki Team Green's Bader Manneh.