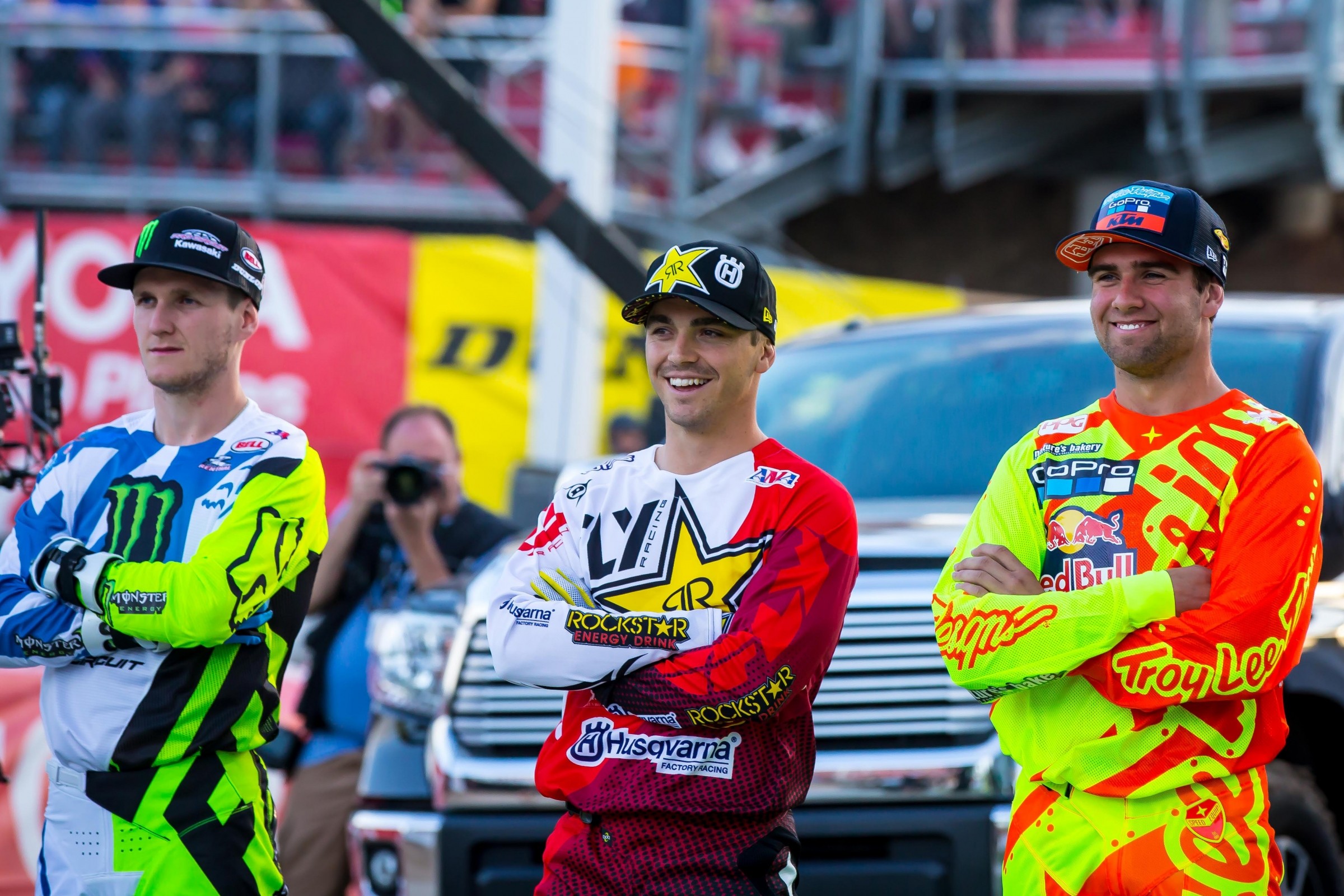 3 on 3 Questions from Vegas

Steve Matthes: Fair. No doubt about it. I know that Kawasaki filed a protest and Osborne was fined for rough riding (precedent was there because remember he Adam Cianciarulo tangled in practice in Indianapolis?), but seriously, what was wrong with that pass? Was it aggressive? Yes. Was it dirty? No way. You want dirty? Look up Josh Grant's move on Malcolm Stewart in East Rutherford. I definitely understand Kawasaki and Savatgy being upset about the move but if the tables were turned, Savatgy would do the exact same thing.

Jason Thomas: It was fair but as we know, there was also a monetary penalty assessed. I can understand Savatgy and Kawasaki proper being upset with the move but anyone in that scenario would make that exact same move. With everything at stake, there’s no way that any other choice would or could be made. The interesting thing to me is Savatgy's lack of urgency in the turn. He knew Osborne was closing, he could hear the crowd going bananas, but there wasn't the intensity in his technique that I would expect. That turn represented the last real opportunity for Osborne to make a move (assuming Savatgy would go inside in the final turn). Savatgy has to be at Defcon 1 on that last lap, ready for any and all moves. I just didn't see that urgency.

David Pingree: This one was good, in my opinion. Yes, Osborne ran it in hot, but when contact was made both riders were aimed in the same direction. In other words, it wasn’t a torpedo move where Savatgy was already turned and Osborne hit him perpendicularly. That was just a good, ole fashioned Thanksgiving stuffing in my book. It was certainly aggressive, but it was the last opportunity to make a pass before the finish and it was for the title. I’m so good with this pass that I’m gooder with it. Not even a word.

2.) Tomac's strategy in the main event: Fair or Foul?

Matthes: Which part? The "bunching" up was 100 percent fair and although it's not something I would do if I needed points, the technique he pulled out did work out—one point better than just taking off and winning the race. But letting Dungey by and then aggressively passing him? Eh … I'm not sure.

Let me be clear: those three attempts by Tomac were not "foul" but I can't see how, if the stated goal of knocking Dungey down was accomplished, KTM and the FIM aren't heavily involved in protests. You don't need to prove anything, it was obvious what Tomac was doing and at some point, the referees have to stand up and say, "Enough of trying to knock Ryan off his bike." So I didn't mind the bunching the pack up (someone please tell Jeff and Ricky on the TV broadcast that's what was happening out there, please) but I thought the aggressive passes were over the line, and had they worked, I don't think the FIM would've let that stand.

Thomas: I’m on board with this Tomac strategy even if it didn't work out. Matthes' "go win and pray for a miracle" strategy had little to no chance for success in my mind. Dungey hasn’t finished worse than fourth in over three years and NEVER finished worse than second in Vegas. So to think he would miraculously finish fifth, when all of the Husky and KTM guys were instructed to stay out of his way, is beyond unlikely. Bringing the pack together with the likes of Chad Reed and Josh Grant was his only legitimate shot of pushing Dungey backward.

As for the contact, I don't really have a problem with it because it was not intended to knock him down. Any high level pro racer knows how to knock someone down (go watch JG take out Mookie at East Rutherford). Tomac was trying to slow Dungey down and hope he stalled or made a big mistake. He was attempting to ride a fine line on which he hindered Dungey, but it didn't warrant a penalty. He wanted to make the FIM's decision very tough and put the onus on them to take a title away over a borderline move. Make no mistake, if he wanted Dungey on the ground, he could have accomplished that multiple times.

Ping: This one was a tougher pill to swallow for me and I know that seems hypocritical after what I just said about Osborne. However, Osborne was racing forward and totally out of time. If there were two laps to go when Osborne caught Savatgy I don’t think he would have made that move.

In Tomac’s case, he was slowing down the pace of the race (still can’t believe the broadcast team never made a mention of this) to bring the slower riders up to the front. And I’m even okay with that strategy right up to the point where he pushed Dungey off the track before the triple and then tried to do the same thing right after the triple a few laps later. By the rulebook’s definition he didn’t do anything wrong, but to me it was just a bad look. It was a desperate attempt to make up for his bad finishes throughout the season by making a more consistent rider fall. Do you like the sound of that? Is that how you want to win? You might not get fined for it, but you are certainly going to lose fans. I love Tomac’s drive to win but this left a bad taste in my mouth. I know Dungey said he was okay with the tactics and strategy, but that’s coming from a guy who would say nice things about the IRS and the folks running the DMV.

Matthes: Not only the late season, but really the entire season. Toronto: Late race fall while in second, throws points away. Detroit: Early fall while in the lead, throws points away. St Louis: Gets cross-rutted and flies off track. East Rutherford: Falls while all by himself in second and then makes a questionable decision to cut a lane off. This was Savatgy's title to win, no doubt about it and he'll be haunted by it for the rest of his career unless he wins a whole bunch of championships. I don't really remember him being this up and down; he's a veteran of the class by now and has the right people around him that you would think he'd have this stuff down. Huge motocross season for him coming up in that he doesn't have to win it but he's got to show that he's overcome this burden he's put on himself. He has to win races and snag podiums. It should be interesting to watch.

Thomas: I am with Matthes here. It wasn't so much the late season, it was the mistakes throughout. He had many small tip-overs and costly mistakes that were nothing more than mental lapses. He could have and should have had a huge lead going into Vegas if not for the small errors. They weren't crazy crashes, but the "death by a thousand cuts" seemed to be his undoing. He was still able to land on the podium in most of those events, but losing unnecessary points on those multiple weekends was the opening that Osborne needed.

Ping: I know a thing or two about snatching defeat from the jaws of victory and Savatgy really let this slip away. His tip-over early in the race, his decision to cut the track the week before, or any one of his many mid-race crashes this year cost him this title. Even if he would have stayed in front of Decotis in Vegas, a rider who any other weekend should not have been able to run his pace, he would have the number one plate. Savatgy is a great rider, indoors and out, but he’ll have to figure out the mid-moto brain farts to be a champion. The good news is he’s still young, so he has time. The hard part will be putting this series behind him and moving forward. It won’t be easy.