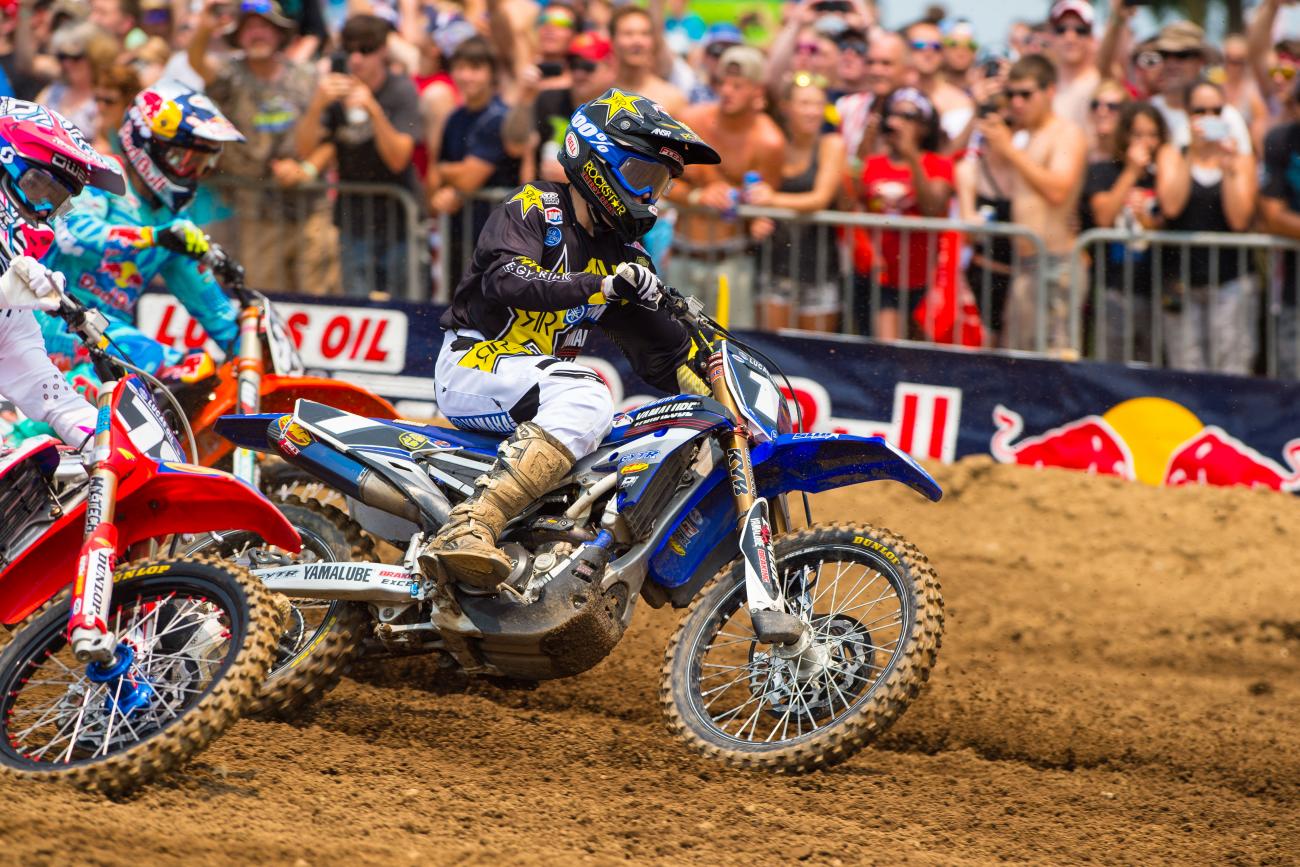 Jeremy Martin had a big day on Saturday. Going into RedBud, he was 10 points behind Red Bull KTM's Marvin Musquin. The two championship contenders had been trading wins and had kept the point situation fairly constant. Both had made their fair share of mistakes, but it seemed that each mistake would be reciprocated within a moto or two. It has been a yo-yo type year for the elite duo in the class. At RedBud, though, Jeremy made a pretty strong statement, mentally as well as physically, en route to his 1-1 finish.

Jeremy began to lose time to both Cooper Webb and his championship rival Musquin. He wasn't riding poorly, per se, but he didn't have the breakaway speed that we have seen from him in opening laps of races before. Webb rode right up to his rear wheel and forced his way by the reigning champion. Not to be outdone, Musquin also made a pass on Martin, and both seemed poised to drop J-Mart. That was when things got interesting. Jeremy was in a perilous position. Both his teammate and the one rider he needed to beat—the two riders he would least like to be passed by—had just passed him. Then Zach Osborne caught him an attempted a pass that would have knocked the defending champion from first to of the podium with a fourth. This type of thing hadn't really happened to him in the last year or so.

“I made a mistake with the suspension between the last practice and the first moto,” he said after the race. “Really struggled for a while and those guys passed me. I was like, oh man, here we go.”

Typically, when we see Martin get out front, he’s a ghost. His biggest bugaboo has been fouling up the start and having to salvage things from there. This time, though, he was falling behind after leading the way. Mentally, he had to be fighting panic, and he also explained that his arms pumped up “rock hard” while fighting his setup. Being 10 points down isn’t so worrisome, but the prospect of losing more points in this particular way at a track he normally excels on is indeed worrisome. Plus, when you’re dealing with arm pump, the situation gets worse. You want to try harder, but trying harder only makes your arms tighter. This was the ultimate fight-or-flight scenario.

It would have been easy to let the circumstances completely ruin his mental clarity, and continue to move backwards. I’ve seen that happen many times to many riders. Frustration overrides the calm that’s needed to regroup and get back into a rhythm.

Jeremy didn't let that happen, though. He kept his lap times consistent and stayed the course. His arms must have loosened up, too. While he was being passed at his 2:05 lap time, he was also locked into a pace that he could maintain. As the laps clicked away, Musquin lost that pace and Martin re-passed the Frenchman before a mistake left Musquin on the ground.

As for Webb, his lap times slipped to 2:06, allowing Martin to close that gap. Martin stalked his teammate in the final laps, looking for a way back into the lead. As champions often do, he found a way. Incredibly, he logged a 2:03 on that final lap. That was three seconds faster than the next fastest rider on the last lap and was also the fastest lap anyone had logged in the previous ten laps. It was truly a heroic charge to overtake Webb and gain 3 valuable points. After being passed early in the moto, he showed incredible mental toughness in the waning laps. There have certainly been more dramatic come-from-behind rides over the years, but the resolve Martin showed shouldn't be understated. If he goes on to beat Musquin for this title, a ride like that can be pointed to as a key reason why.

There are usually moments in every championship that reflect why it went a certain way. Jeremy McGrath's Millville crash in 1996, Ryan Villopoto's last-corner pass on Ryan Dungey at Steel City in 2011, Christophe Pourcel's cracked cylinder at Southwick in 2009, etc. Those were championship-defining moments and will be remembered for a long time to come. Martin's first moto at RedBud may not be that compelling at first glance, but it represented a large swing in both points and momentum.

Next weekend he gets to go home, to a track he knows better than anyone not named Alex Martin. He enters with a newly regained red plate, a mountain of confidence, and, with Webb's resurgence, a chance to put some serious distance between he and Musquin. We have said all along that Martin and Musquin need to capitalize on the races that suit them best. Martin almost blew that opportunity but dug deep to take charge of this championship, if only for the moment. Where the title goes from here is anyone's guess, but if Martin does indeed win, I will look back to that first moto's resilience as a key factor.