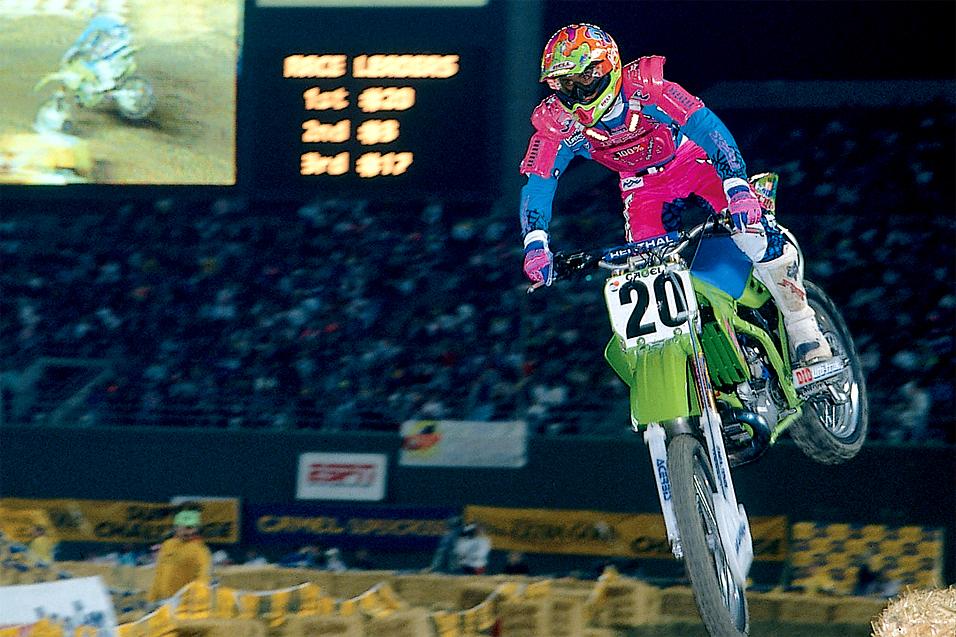 This weekend in Las Vegas, the final round of the 2011 Monster Energy Supercross series will be held at Sam Boyd Stadium to put a nice bow on this sensational season. Going into this race, Monster Energy Kawasaki’s Ryan Villopoto holds a nine-point lead and looks to be on point to win his first AMA Supercross title. RV is in his third year in the big-bike class and has won at Las Vegas before, but in this week’s Kawasaki SX history, we’ll take a look at first-year big-bike riders winning Vegas.

The year was 1990 and the date was March 17th,  and the Camel Supercross series was chugging along and the sport was in a peculiar place in that the old superstars of the sport (Rick Johnson, Jeff Ward, Johnny O’Mara) were near the end of their careers and the 250 class saw an influx of kids come in. With names like Damon Bradshaw, Mike Kiedrowski, Jeff Matiasevich and Larry Ward- the kids were coming up and ready to shove the vets aside. 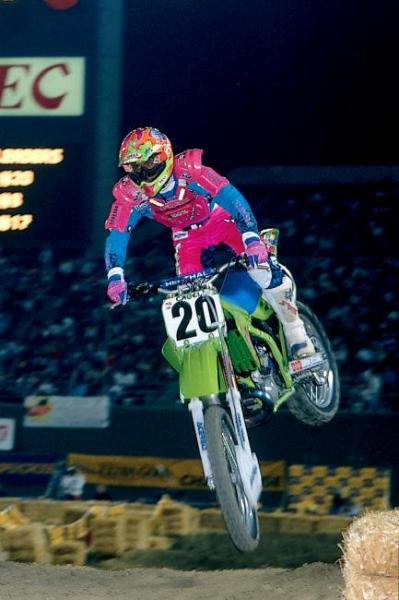 Matiasevich was a hot young gun in 1990.
Photo: Moto Verte

Bradshaw came out of the gate strong that season before being injured. The veterans struck back with some wins and the defending champion Jeff Stanton struggled a bit with a new bike and the pressures of the number-one plate. Using consistency and speed, Kawasaki’s Jeff Matiasevich found himself in the points lead. The number 20 KX250 battled hard every week and was very aggressive. The rider nicknamed “Chicken” had won two 125cc championships in a row and now, on his Jerry Campbell-tuned KX250, was looking for the big prize.

When the riders rolled into Vegas’ Sam Boyd Stadium, the very same stadium as this weekend’s race, the dirt was hard packed and slick—just like it will be this Saturday.

Matiasevich was still holding the points lead at this part of the series and Vegas represented the seventh of seventeen rounds. When the gate dropped for the main event, the holeshot master of the ‘90s, Doug Dubach, got out front early on the slower, more technical track. Matiasevich and Stanton then pursued Dubach close behind.

Early in the race Chicken got over a double coming out of a turn to pull up alongside the number seven of Dubach and then used his momentum in the following whoop section to sneak by and get into the lead. Stanton also got by Dubach in the next turn and the race was on. 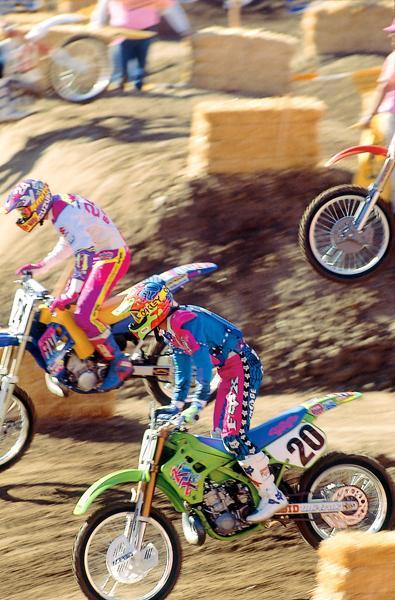 Matiasevich never was able to capture another win after his first in Vegas.
Photo: Moto Verte

Matiasevich had the defending champion and winner of the previous round in Daytona behind him breathing down his neck, but the Kawasaki rider just started pulling away. Chicken used good whoop speed, put together some tricky rhythms and put the power to the ground with his Kawasaki to lead the remaining eighteen laps and take his very first 250 supercross win with relative ease. His points lead extended, but the Kawasaki rider would never be able to win another 250 supercross race in his career. But on this night, in Las Vegas, the lights shined brightly on Jeff Matiasevich.

Kawasaki hopes that the history repeats itself this Saturday night.