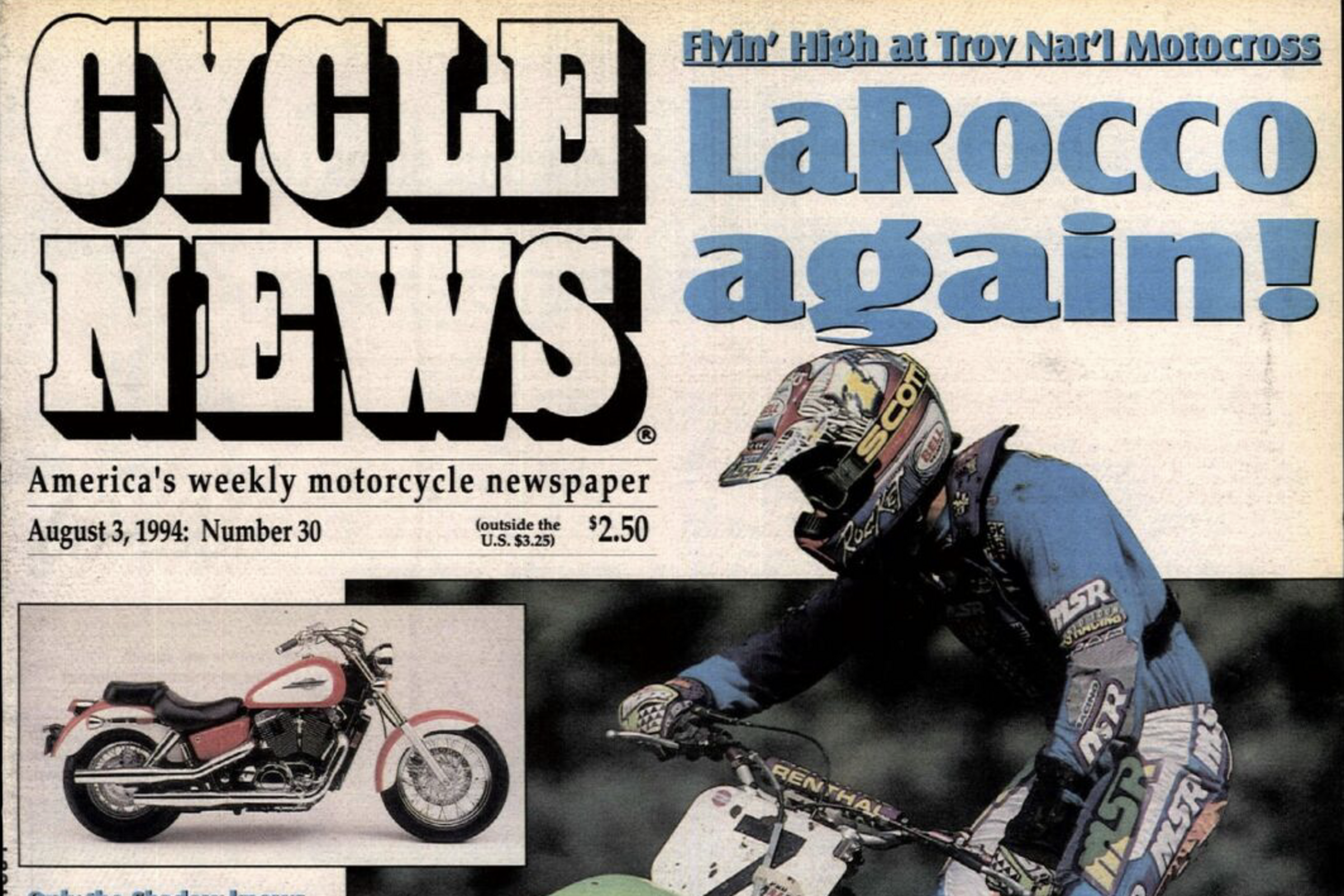 As we approach the opening round of the 2022 Lucas Oil AMA Pro Motocross Championship, we are counting down to the days by going through each of the 50 years in the history of AMA Pro Motocross. Today, the MAVTV+ Countdown reaches 1994, which was quietly a year with some big changes in the sport which would lay some groundwork for years to come.

The biggest change was the end of the 500cc National Class, which ran for the last time in 1993, with Mike LaRocco as champion on the venerable Kawasaki KX500. Starting in 1986, the “big bike” classes of the AMA Nationals were split, with the 250 championship running for the first half of the season, then the 500s in the second half. With the Pro Motocross schedule generally featuring 12 rounds, this meant shorter, six-race championships for the 250s and 500s. (The 125 Nationals ran the entire schedule.) For ’94, the 250 Nationals would now run the entire 12-race calendar, from the Gatorback opener to the Steel City closer.

Why does this matter so much? Well, a 24-moto championship is a longer grind, which makes the long game of staying healthy more critical. It also means one bad race, like a crash or DNF, would have less impact on a series when you have twice as many motos to make up points.

But there was a bigger point that would have an impact for years to come: Suzuki had stopped making an RM500 over a decade ago, and Yamaha’s air-cooled YZ490 was so uncompetitive the factory team didn’t bother to race the 500 Nationals anymore. Instead, those teams would just send their 250 riders down to the 125s for the second half of the nationals.

By ’94, and through today’s 450 class, all the manufacturers would have a bike for both classes for the whole season. This leads to deeper fields and more competition. The 500 two-stroke has a storied place in motocross history, but the truth is the last few years of the 500 Nationals usually only had four factory riders considered contenders for wins. Contrast that to today’s racing.

One other big change came for 1994. The nationals got a big new TV package on ESPN and ESPN2, putting them on the same network as the AMA Supercross Championship for the first time. Supercross began airing on ESPN weekly in 1989. Getting every national on TV was a big boost for the series as well.

As for the racing, though, the same teams dominated. In the 125s, Honda’s CR125R was still the bike to beat, and while the early national rounds featured a slew of different winners and some unbelievable battles, Honda teammates Doug Henry and Steve Lamson were the top dogs. Lamson was consistent and led the points early while Henry, the defending champ, was struggling with illness. Henry was routinely getting IVs at the races to replenish himself, which eventually led the AMA to create a rule that says a rider can’t compete if he gets an IV on race day. That rule still exists today.

The ever-determined Henry dug deep and defended his title anyway. Quite famously, he and another ever-determined rider, Ryan Hughes, got into an on-track brawl at the Steel City finale. No matter, by then Henry had his second straight AMA 125 National Championship in hand.

In the 250 class, Kawasaki teammates Mike Kiedrowski and Mike LaRocco were the men to beat, no surprise since the MX Kied won the ’93 250 title, and LaRocco grabbed that final 500 crown. They battled hard and it spilled over into some drama at RedBud, when LaRocco smashed into his teammate, so Kiedrowski ghost rode his bike into him after the finish of the race. Things were getting heated, but it ended suddenly at Unadilla when Kiedrowski got roosted by a huge rock, breaking his knuckles and ending his season. LaRocco would cruise to the title.

No doubt the most shocking thing to happen in 1994 came after the season. For the first time in 13 years, Team USA finally lost the FIM Motocross des Nations. The team of LaRocco on a 500 (the only time he would get to wear his #1 plate on the KX500 from the ’93 championship), a returning Kiedrowski on a 250, and Jeff Emig on a 125, simply got out-ridden by Team Great Britain, featuring Paul Malin, Kurt Nicoll, and Rob Herring. It was an all-time day for the Brits, especially Malin, who outperformed Emig and Stefan Everts to crush the 125 class. Great Britain has not won the Motocross of Nations since, but this shocking win was big enough to last a lifetime!

Back home, there were two other riders to note. First, Yamaha’s factory fortunes were in shambles after superstar Damon Bradshaw suddenly retired at the end of a disappointing 1993 season. Yamaha hired Mike Craig to replace him, and Craig was great for a short span, winning the Tampa supercross, but then fizzled so badly the team eventually let him go during the nationals. They filled his spot with rugged New England based support rider John Dowd, who was already 28 years old. Dowd responded to the factory bike by winning two nationals and finishing second in points! He would hold onto that factory Yamaha spot for several years and go on to become one of the all-time vet heroes of the game.

On the opposite end of the spectrum was Jeremy McGrath. Already well on his way to becoming King of Supercross by dominating the season with his second-straight AMA Supercross Championship. Honda moved him up to the 250 class outdoors, but he really wasn’t trying very hard. He won a moto at the very supercross-style Kenworthy’s in Troy, Ohio, but he wasn’t strong enough to get the overall in moto two. McGrath was now fast enough to win outdoors. He just needed to get in better shape.

One other note on McGrath in 1994. This was the year that he introduced his signature nac-nac trick, a move that grew out of his upbringing as a BMX rider. McGrath first did it in practice at the ’94 Orlando SX, which led to a what-the-hell-did-I-just-see?! moment in the grandstands. He also did it in the heat race, but not the main event as Mike LaRocco was too close behind him. One week later the photographers were ready in the Houston Astrodome for Jeremy to show off his new trick on the way to yet another win and, ultimately, another AMA Supercross title. You can much more about the nac-nac in this deep-dive story by our colleague Brett Smith of We Went Fast.

And over in Europe the veteran American racer Bob Moore finally accomplished his Brad Lackey-esque crusade to win an FIM Motocross World Championship when he won the 125cc Grand Prix title aboard his Chesterfield Yamaha. Moore, who had been in Europe since winning the ’85 125cc West Region Supercross title as a rookie with Suzuki, had come close on several occasions. Little did anyone know that, 28 years later, his ’94 title remains the last time an American won an MXGP crown.