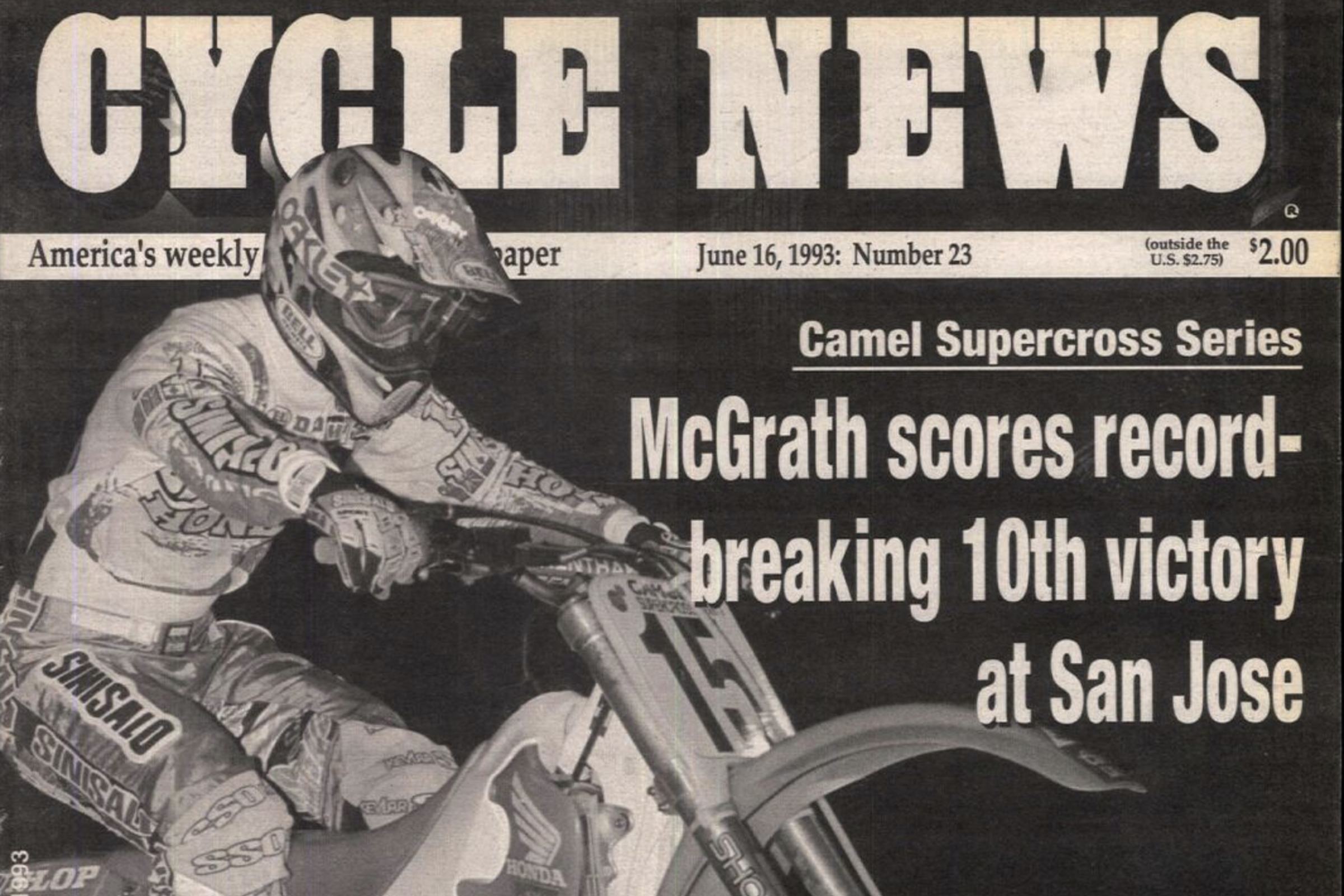 It’s time to look at 1993 in our MAVTV+ 50-Day Countdown to the opening round of the 2022 Lucas Oil Pro Motocross Championships, which will commence on May 28 at Fox Raceway in Pala, California. We are celebrating the 50-year history of AMA Pro Motocross by going over each season from the start in 1972, one year at a time. Today, we reach a huge year in history—supercross history in particular.

Team Honda had won the last five AMA Supercross crowns in a row via Rick Johnson, Jeff Stanton (three times) and Jean-Michel Bayle. But the team had fractured over the course of Bayle’s time here, and now that he had moved back to Europe for road racing, it seemed like Stanton would have an easy time notching a yet another title for the team. He would have to battle he rival from previous years, Yamaha's Damon Bradshaw, and he did have two younger teammates join him: Steve Lamson, Doug Henry, and two-time 125 West Region Champion Jeremy McGrath, who had graduated from the PEAK/Pro Circuit Honda team.

During the off-season McGrath won his first international 250cc SX at the Paris Supercross du Parc. Said Cycle News of his chances in a series preview, “Now 21 years old, McGrath should win more than one main event this season, and he stands a good chance of making the top five in the final point standings.” One person who did see the future greatness was Stanton himself, the three-time AMA Supercross and three-time AMA 250 Pro Motocross champion. In the same article he predicted that Jeremy would be the next big star in the world of supercross and motocross.

After a modest start—Kawasaki’s Mike LaRocco would win the Orlando SX opener and Yamaha’s Damon Bradshaw, still reeling from the previous year’s meltdown in the LASX finale, won the Houston round—McGrath took over. Literally. He won Anaheim, and then added Seattle, putting him past Cycle News’ prediction in just four races. By the time the series was over, the man who would soon be king had won as record-smashing ten rounds of the series. He clinched the title early and began a reign of AMA Supercross Championship wins that would stretch over four consecutive years with Honda, and he would take every record there was to take in AMA Supercross. It was an astonishingly fast rise to the top for Jeremy McGrath.

Behind him (and having his own excellent season) was Kawasaki’s Mike Kiedrowski, who got his first AMA Supercross 250 main event win at Daytona. Kiedrowski, who had won the ’91 AMA 125 MX title and ’92 AMA 500 MX title, would hit the trifecta and add himself the ’93 AMA 250 MX title, making him the only rider in history to win a title in each of the three classes in three consecutive years.

For his part McGrath rode in the 125 class outdoors, where he got his first couple of outdoor national wins at Gatorback and Hangtown, but those were practically afterthoughts in the context of what Jeremy was doing in supercross. The 125 MX title appeared that it was going to be successfully defended by Yamaha’s Jeff Emig, but some late-season mishaps opened the door for Honda’s Henry (already the 125SX East Region champion) to earn his first AMA National Championship.

In the 500 class Kawasaki’s Mike LaRocco earned himself the title, as well as a place in the history books at the last AMA 500cc National Champion, because after the ’93 season, the AMA was doing away with the 500 class all together in AMA Pro Motocross. By this point Suzuki was long done with making 500cc models and Yamaha had quit evolving their 490. It was decided that every national moving forward would be just 125 and 250 class racing, as the once-mighty 500 class had lost much of its prestige.

A few other notes on 1993: Jeff Stanton would struggle to win races, taking just one SX main event (Las Vegas) and one 500 National (Spring Creek), later admitting that he had overtrained himself and was burning out. Damon Bradshaw would win two SX races (Houston and Atlanta) and a single 250 National (High Point) and then decided to quit racing later in the summer and go on a hiatus that would last two years. And Team USA would once again win the FIM Motocross of Nations in Austria as McGrath, Emig, and Kiedrowski teamed up to pull off what was America’s 13th straight win.

(And on a personal note, we renamed our little newspaper The Racing Paper, switching it over to Racer X Newspaper. We also got our first national advertisement when a guy working at the Lord, Dentsu Advertising Agency out in California sent in a Suzuki win ad out of the blue. His name was Eric Johnson.)