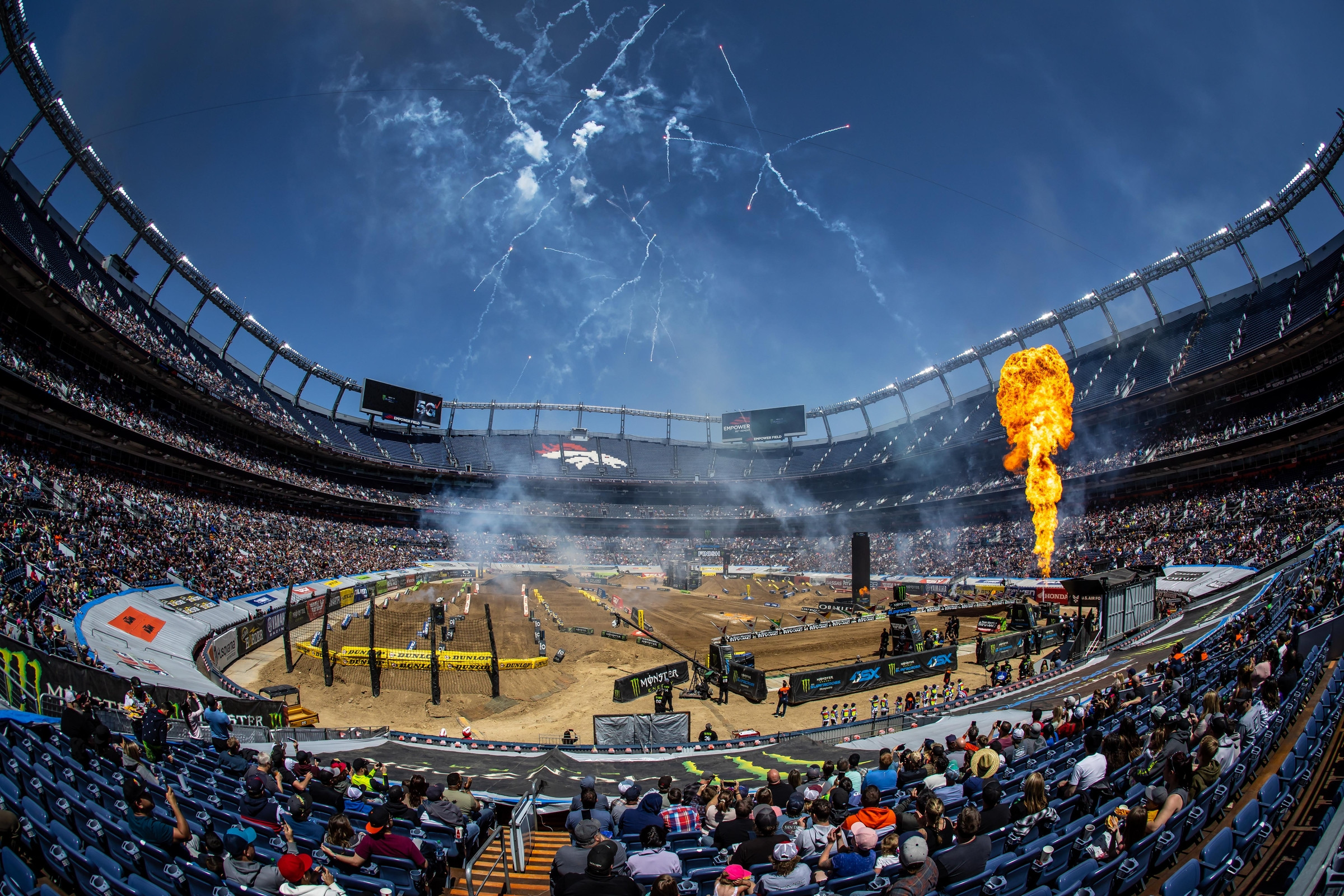 Coming into Saturday everyone knew the potential was there for Eli Tomac and Christian Craig to wrap up the 450SX and 250SX West championships, respectively. All Tomac had to do was finish fourteenth or better and the title was his. For Craig, a win would get it done. This we know. What we didn't know was, would it actually play out that way? Let’s dive right into this week’s Saturday Night Live to find out

Okay, so there’s no real suspense with the 450SX title scenario. Disaster would have to have struck for Tomac to miss out on clinching it this weekend in Denver, which he did without any form of drama whatsoever. Tomac was running second early behind Chase Sexton before Sexton made a mistake, went into a Tuff Block, and went down. Tomac found himself in the lead, much to the approval of the crowd, who got loud for Tomac all over the stadium as he ciruclated the track. Afterward Tomac said he could hear the cheers following him around, and that it actually kind of messed with him.

“It almost puts more pressure on you,” Tomac said afterward. “They follow you around the track and you can hear them all the time. It makes you wonder if there’s a guy on you in a turn, or what’s going on. They follow you around. It’s so cool to see the crowd engage in the race like that.”

After leading for a couple laps, Tomac yielded to Jason Anderson, who had an outstanding pace. Tomac would later cede additional spots to Malcolm Stewart, Marvin Musquin, and Chase Sexton, but it didn’t matter—fifth was more than enough to clinch the championship he’d been closing in on all season. Afterward he admitted he wasn’t delighted with his results at the last few rounds, and that he’d been battling a knee injury, something that’d been concealed very well.

“I think back to deciding to make this change and aligning myself with the team and crew that we have. You dream about doing these things, but for it to actually come to true in real life, it always makes you speechless. It wasn’t the finish these last couple races that I wanted, I wanted to give the Denver fans more. Once again they were the best fans we’ve had all year, they were so engaged. They follow the race so well. And once again I want to give so many thanks to my team and the crew. I was pretty calm when I woke up this morning. I was more freaked out in Atlanta and in Boston because my knee was jacked, and it still is not great. I was pretty stressed out. I haven’t been riding this last week at all.”

When asked on whether or not he’d be racing beyond 2022, he was quick to reveal he was already working on a deal for next year, saying, “I’m trying to sign my next year right now. That’s in the works right now, I want to keep going.”

Tomac’s championship understandably stole the show, especially in his home state of Colorado, but how about Anderson?! The Monster Energy Kawasaki rider has been incredible all season, and especially lately, having won the last three in a row. If he wins next week at the finale he’ll match Tomac for number of wins in 2022! In the post-race press conference Anderson described the track, which dried out and got hard, as tough, but said these kinds of conditions weren’t unfavorable for him.

“This track was tough. I did feel confident that I could ride it very well, but at the same time you have to put yourself in a good position because if you’re back in the pack, you can have some moments,” Anderson said. “I dodged one moment when Chase [Sexton] fell. His rear wheel came out and I kind of clipped it with my footpeg. I was able to avoid that. But as far as these conditions go, I think I thrive pretty well in these hardpack conditions. Tonight it was nothing short of that, and I don’t think anyone went wide open. I think everyone was quarter-throttle, trying to get traction to the ground. It was really tough.”

Second place went to Malcolm Stewart, his third runner-up finish of the season. It’s been a great season for Stewart, a fact he acknowledged in the postrace press conference.

“The whole goal was to be inside the top five at every round and see what the endgame is,” Stewart explained. “Now that we’re third in points, it’s a good feeling, but we still got another one to go and anything can happen. So far it’s my best season so far, it’s been going really well. It’s been awesome for me.”

Moments later, when asked what it might take to get his first win, he admitted it was something he really wants to get done, but also pointed out the value of consistency.

“We’ve been doing the same thing and trying all year long and it’s not easy,” Stewart said. “We’ve been itchin’ and scratchin’ for a while. [A win] is definitely in the works, and all it takes is the right moment to get that first win. We’ve been close. I’ve been so close and it’s definitely one of those things I want to accomplish this year. But you have to take what’s given to you. There have been plenty of times in my career when I probably could have won the race but threw it away. This year it’s more about being consistent and moving forward. You have to start small and get podiums, then podiums turn into wins.”

Rounding out the podium was Marvin Musquin, who has been putting together an outstanding run of results in the second half of this season. Musquin took advantage of a crash from Justin Barcia, who crashed again toward the end of the race, on his way forward on a track that wasn’t easy to race on.

“I don’t think anyone was really comfortable, it was very tough conditions. I made the best out of it with a bad start. I had good opportunities during the main, but to be honest it was a pretty quiet main for me. Nothing exceptional, but to be on the podium is good,” Musquin said.

In the 250 Class it sure looked like we were going to see a battle to remember when Hunter Lawrence got out front with Craig right behind him. Lawrence, of course, badly wants to win, while Craig could wrap up the 250SX West championship by taking the win. He was going for it too, showing Lawrence a wheel lap after lap in multiple places on the track. For a few moments it seemed like it was only a matter of time before Craig took control of the lead. It didn’t work out that way, however. Lawrence was hung in there, and Craig finally ended up making a mistake and going down as the two entered the sand section.

“I had a lot going through my mind when I had him [Lawrence] right in front of me,” Craig said afterward. “I could have played it safe, or I could have passed for the championship. I got caught off guard, there was a little rock in that lip and it caught me off guard. Next thing you know I was on the ground. That one freaked me out a little bit and I rushed and got up as fast as I could. Before that I was feeling really good, I was clicking off laps. I had a couple open opportunities where I could have put my front wheel in there, but I feel like if I’d have done that he would have come back probably harder. I have to expect that, that’s fine, that’s racing with the position he’s in. I played it safe until I crashed, then after that I was trying to catch back up to get on the podium at least, and minimize the damage.”

Craig didn’t say as much in the press conference after the race, but he clearly was not thrilled with how his afternoon played out. With one race remaining he leads Lawrence by 18 points, a sum he shouldn’t have trouble protecting at the finale next week in Salt Lake City.

Big credit to Lawrence for the performances he’s been putting in lately. This win marks the third win in a row for the HRC Honda rider, and with it comes the honor of taking the championship all the way down to the wire at the finale.

“I consider myself a pretty technical rider so it wasn’t if I could. I knew I could, I just had to figure things out,” Lawrence said of the growth he’s shown this season. “One of the big things is my body just getting healthy. I’m at 100 percent right now and I’m able to do what I want on the bike for the duration I want to, my body can withstand that. That’s a huge helping hand. It’s my second season and I’m still not stocked up on laps like some of the guys. More laps and you just get better and better. Little mistakes get eliminated. It’s just more time.”

Taking second was Michael Mosiman, who for the most part, rode a pretty lonely race. At one point it looked like he was closing on Lawrence for the lead, but it just didn’t happen. When asked about some of the small mistakes he’s made this season that have frequently kept him just off the tip of the spear, he explained how valuable this season has been for him in terms of learning and growth.

“I’m not going to build on it, let’s put it that way,” Mosiman joked. “If I continue to think about that in my mind it’s going to be more likely to keep happening. If you look at the rock you’re going to hit the rock. I’m going to look at the twenty other times that I nailed that corner and remember those kinds of things. I’m going to learn as much as I can but I’m not going to dwell on it. This year I’ve been building. I’ve learned a ton. Just being there from the beginning and letting my confidence grow. I’m learning a little bit in the whoops, and if you’re legit in the whoops you’ve got a dang good shot at the championship. There are a few things that I’m trying to learn and pick up, even this late in the season, that I’m trying to mess with and tweak. There’s room for growth and then there’s consistency. I’ve built and improved every single year that I’ve raced and don’t think there’s any reason you won’t see more of that trend.”

Jo Shimoda held down third for a good portion of the race but fell victim to a charging Craig as the race progressed. His fourth in Denver puts him a tie for fourth in points with Vince Friese, who took sixth.