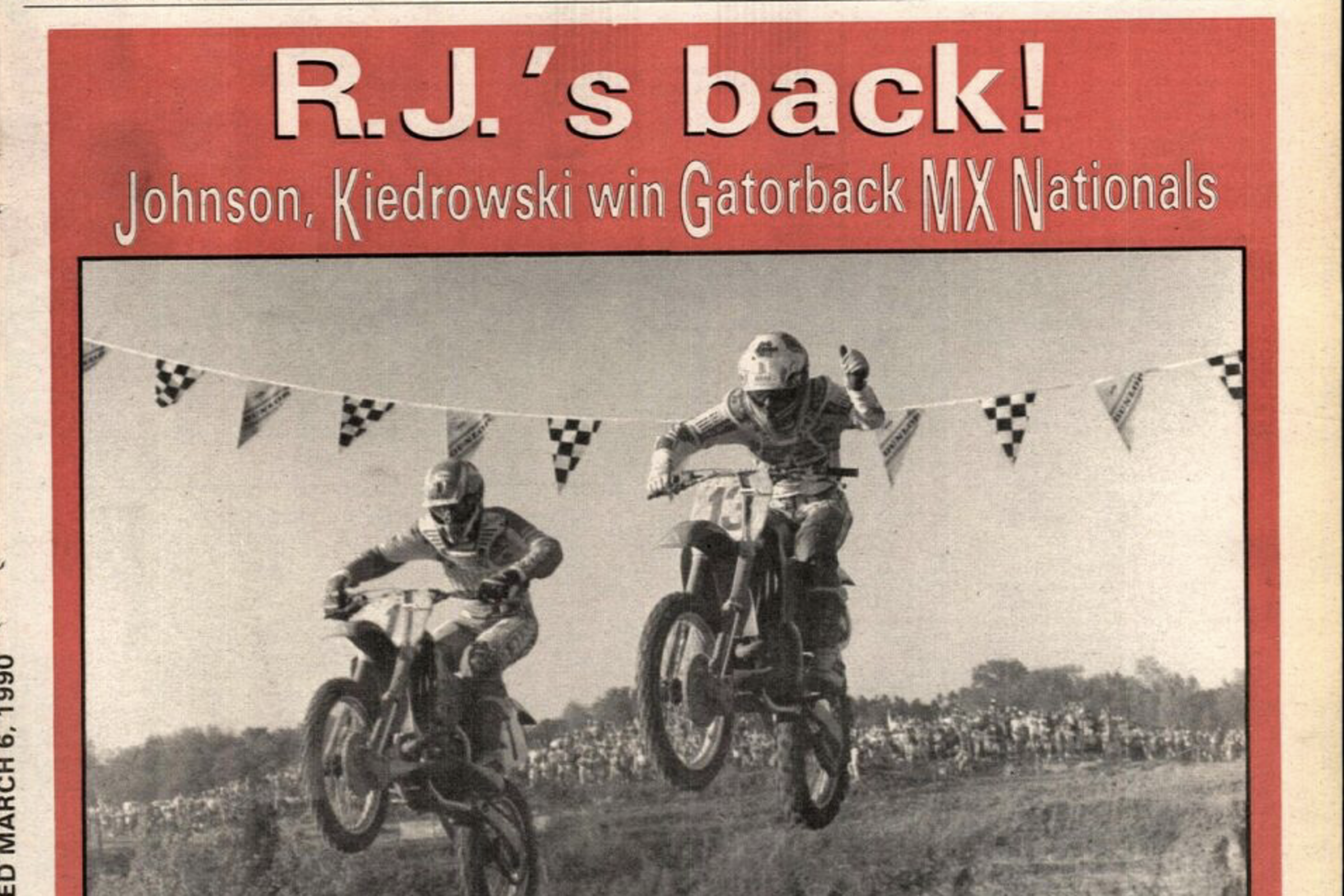 We’ve finally reached the 1990s in our MAVTV+ 50-Day Countdown to the start of the 2022 Lucas Oil AMA Pro Motocross Championship. We are going over each of the 50 years of AMA Pro Motocross, beginning with 1972, as we head to the May 28, 2022, season opener at Fox Raceway in Pala, California. Motocross was evolving quickly, especially in those early years when every race was like a lesson in going faster, with better equipment, on tougher tracks. By 1990, it was all beginning to really look a lot like what we have today, only on two-strokes, 125cc, 250cc, and 500cc motorcycles… And without energy drinks. Nor the internet. Nor social media. Nor great television coverage… Okay, maybe it wasn’t all that similar, but the riding styles had definitely come around!

The 1990 season was supposed to be a comeback of sorts for Rick Johnson, who had reached dominant superstar status just like Bob Hannah had a decade earlier, only to get knocked off the mountaintop by a freak injury. In Hannah’s case, it was a water-skiing accident. In the case of RJ, it was a badly fractured wrist that was the result of a collision with privateer Danny Storbeck at the first national of 1989. In both cases, the injuries came at the peaks of their respective careers. Hannah would go on to win a lot more races, but no more championships. Johnson would get just two more races: the opening 250 National of 1990, as well as the last 500 National of ’90, which turned out to be the last national of his career, as Johnson would soon retire due to the nagging wrist injury.

Honda already had a replacement for Johnson in Jeff Stanton, but he too now had a new threat in that Jean-Michel Bayle made the move from France to the U.S. full-time. Honda would make him the fourth rider in AMA Supercross behind Stanton, Johnson, and Mike Kiedrowski, and he would soon emerge as a title contender. It took seven rounds for JMB to get his first win, and then he quickly reeled off five more. But a 20th place finish at the Charlotte SX cost him 20 points to third-place Stanton. In the end, Stanton would win the title by seven points.

Here is the 1990 opener from Gatorback:

Of course, Pro Motocross had already began by then as the two series overlapped. And because Honda had four riders, they decided to split them up for outdoors, with Stanton and Johnson riding the 500 class and defending champion Kiedrowski and Bayle in the 125 class. Stanton repeated as 250 champion with ease, clinching the title at the last round at Kenworthy’s in Ohio by seven points over the veteran Jeff Ward. That gave Stanton four major titles in just two years.

But in the 500 class Stanton crashed out of the second moto at Steel City, suffering a concussion. He also dropped 25 points to race-winner Ward. In the end Ward would win himself another 500 Pro Motocross Championship by 19 points over Stanton. All told, Kawasaki’s Ward would win seven major titles in his career, this being the last. He also became the only rider to win every major AMA title: AMA Supercross, 125 National, 250 National and 500 National.

The most drama of ’90 came in the 125 class, where two-time FIM Motocross World Champion Bayle was trying to beat his teammate Kiedrowski. He appeared to have a good run going until Washougal, where Bayle took a 14-point lead into the race, only to suffer a broken arm with a crash in the finish-line whoops. That opened the door to crowd favorite Guy Cooper and his Suzuki to take on Kiedrowski, and the title went down to the last race at Unadilla. Cooper went in one point behind the Honda rider, but then won the first moto over his Suzuki teammate Mike LaRocco, with Kiedrowski third. That gave Cooper a four-point lead going into the last moto, so he was okay to finish behind Kiedrowski, so long as no one else got between them. And when LaRocco got a flat tire at the halfway point, Cooper was able to move into second and stay there, winning Suzuki its first AMA Pro Motocross title since Mark Barnett’s last in 1982.

Of the tracks on the 1990 AMA Pro Motocross schedule, eight of them are still on the 2022 Lucas Oil Pro Motocross calendar: Hangtown, High Point, RedBud, Southwick, Washougal, Spring Creek, Budds Creek, and Unadilla. The ones that aren’t were Gatorback, Lake Sugar Tree, Kenworthy’s, Broome-Tioga, and Steel City.

And in September, before the last three rounds, the series took a break for the FIM Motocross of Nations in Vimmerby, Sweden. Team USA was led by Jeff Ward on the 500, Jeff Stanton on the 250, and Damon Bradshaw on the 125. They managed to win again.