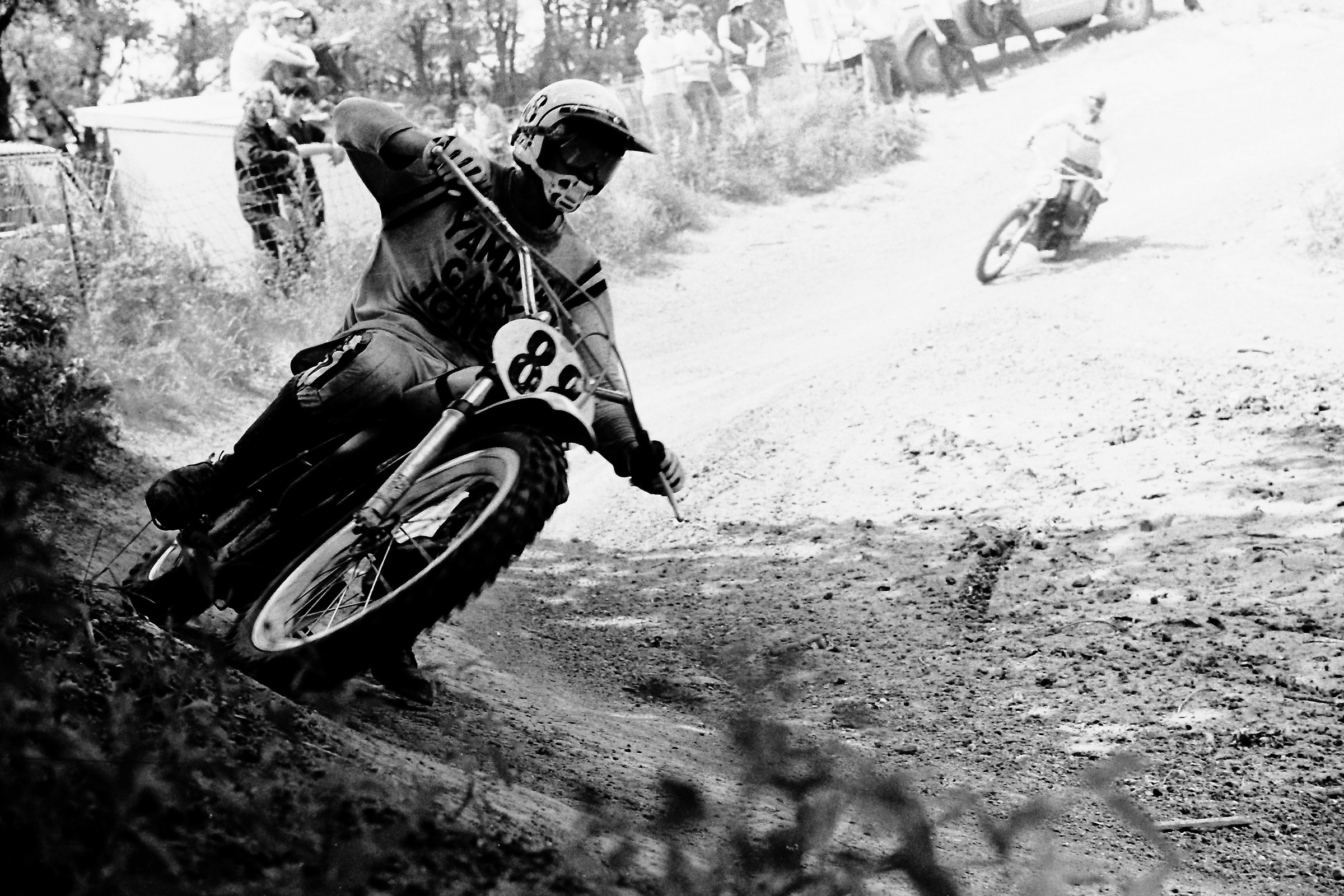 Welcome to our MAVTV+ 50-day countdown to the 2022 Lucas Oil AMA Pro Motocross Championship, which begin on May 28 at Fox Raceway in Pala, California. We are celebrating 50 years of Lucas Oil Pro Motocross, which began in 1972. So, in order to start looking forward to this summer’s races, we’re going to go over the history of the series, one year at a time. And of course, we will begin when AMA Pro Motocross begins, 1972. This entry is going to be a little long as we begin with how it all started to come together.

Motocross was on the rise in America ever since 1966, when the promoter Edison Dye, the U.S. importer for Husqvarna motorcycles, came up with the idea of inviting multi-time FIM Motocross World Champion Torsten Hallman to come to North America and demonstrate just how fast a Husky could be in the hands of a capable rider. Hallman dazzled the fans at three different races: the Dirt Diggers’ Hopetown Grand Prix at Corriganville, California; the Canadian Northwest Moto-Cross at Vancouver, British Columbia, Canada.; and the Kiona Cross Country Championship in Kiona, Washington. The tour was very brief, but it was also wildly successful for Dye’s Husqvarna sales, as Hallman dominated all three.

The next year Dye expanded his tour and called it the Inter-Am Series. He also invited more riders to come along with Hallman from Europe, including Ake Jonsson, Dave Bickers, and a young Roger De Coster. They raced all over the country, dominating the Americans while also teaching them how to race like they did.

Here’s a video from the 1967 Westlake Inter-Am in California:

Dye’s Inter-Am Series kept growing, though it was not sanctioned by the AMA. In fact, the AMA didn’t sanction any motocross races until 1969, starting with the Ohio-X Professional MX in Croton, Ohio. The races were won by BSA rider Dick “Bugsy” Mann in the 250 class and Swedish transplant Gunnar Lindstrom (father of current Honda HRC team manager Lars Lindstrom) in the 500 class.

The American Motorcyclists Association had not really taken notice of motocross up to that point. They were more focused on the rights of street riders, and as a sanctioning body were more concerned with their traditional disciplines, like road racing, flat track, TT, and national enduro competitions. But by the end of the 1960s motocross was really growing in America, so the AMA decided to sanction a full-on professional series for the first time. It was called the Trans-AMA Series and it competed directly with Dye’s Inter-Am Series, which still wasn’t sanctioned. On the first tour they scheduled just one of the tracks that is on the 2022 schedule: Unadilla in upstate New York. British rider Dave Nicoll (Kurt Nicoll’s father) ended up as the series winner. The top American was Dick Burleson, who would soon find much more fame and success as an enduro racer.

Finally, in 1971, Dye began sanctioning his series with the AMA, and the ’71 Inter-Am Championship ran in the summer on 250cc motorcycles while the Trans-AMA Series ran in the fall on 500cc motorcycles. The Inter-Am Champion was Czech rider Vlastimil Valek, with the top American finisher being Yamaha-mounted Gary Jones. As a result, Jones was considered the U.S. National Champion, even though he only finished the series in seventh. The top American in the Trans-AMA Series was Mark Blackwell, who topped Brad Lackey by a single point, albeit for 14th and 15th place in the final standings.

Finally, in 1972, the AMA decided it was time for a true AMA National Motocross Championship, which meant races without the Europeans. The problem is that most of the promoters and racing fans still wanted to see the Europeans, so the AMA came up with a novel idea: they decided to incorporate both the existing Inter-Am and Trans-AMA series, with the Inter-Am races part of the 250cc Nationals, and the Trans-AMAs part of the 500 Nationals. They would simply skip over the Europeans and leave them out of the AMA Nationals’ results and point standings.

The AMA also decided to invite California promoter Mike Goodwin to enjoin his three race Pacific Championship to the AMA Nationals, which were held at the Cal-Expo in Sacramento, plus Carlsbad and Saddleback in Southern California.

However, the 1972 AMA National Motocross Championship would not start in California, but rather on the infield of the Road Atlanta racecar track in Georgia. And few big-name West Coast-based riders like Lackey, Blackwell (who would spend much of his ’72 season on the 500cc Grand Prix tour in Europe), John DeSoto, and Jim Pomeroy even bothered to attend. They would wait until the series came to them.

The winners of the first-ever AMA outdoor national were a pair of New Yorkers riding for the same bike shop, Ghost CZ on Long Island. Barry Higgins (500) and Sonny DeFeo (250) were the winners that went down in history, and they added to that history three weeks later when they both also won the second national just below Memphis, Tennessee.

One week later, it was time to start the West Coast swing, and this time it was Higgins and DeFeo, the actual series points leaders, who decided it wasn’t worth it for them to go all the way across the country and compete. But Lackey and Lindstrom and friends were out there to race—Lackey on a CZ, though he would be hopping on a new Kawasaki prototype as soon as it was ready for competition. He won the 500 class at all three California rounds, while the 250cc winners were Lindstrom (Cal-Expo), Pomeroy (Saddleback), and Gary Jones (Carlsbad).

Where was Hangtown? Turns out that the Dirt Diggers North Motorcycle Club had built their own event up so well that it didn’t need to be a part of any series to be successful. It was a true stand-alone event and would not decide to join the AMA National Series until 1974. There was also a big race in Twin Falls, Idaho, that Evel Knievel was running called Snake River Canyon that was meant to promote Knievel’s upcoming SkyCycle jump across the canyon, even though that was two full years away. The ’72 Snake River Race took place in March and was won by “Jammin’” Jimmy Weinert of New York.

After three California races came another East Coast national, held at Snyder Park in Washington, Indiana, and won by Gary Bailey in the 250 class and Texas CZ rider Wyman Priddy in the 500s. Lackey skipped the race again, staying back in California to do a Pacific Championship race at Laguna Seca on a CZ.

Just as the AMA series was starting to pick up momentum, it was time for Dye’s Inter-Am Series to start up, which brought back the Europeans. The irony is that Yamaha-mounted Gary Jones ended up beating them in all three 250cc motos at the Owyhee Motorcycle Club Grounds in Boise, Idaho! But the 500 class was considered a support class, so it did not pay national points. That led Lackey to end up pulling out a Kawasaki 250 prototype and race the 250 class, finishing fifth.

Jones’ breakthrough win was the only Inter-Am round that an American would win in 1972, but the consistent Jones would manage to win the Inter-Am Series based on total points, topping Torsten Hallman, Arne Kring, and Thorleif Hansen—all Swedes—to become the first American to win the series. (Also of note is the fact that in the middle of the Inter-Am Series, the promoter Goodwin held what he called the Superbowl of Motocross at the Los Angeles Coliseum, won by 16-year-old Marty Tripes and basically the birth of modern supercross.)

Again, the only track from the ’72 schedule that is a part of the 2022 schedule was Unadilla, which hosted an Inter-Am race on July 16 that was won by Swedish Yamaha rider Arne Lindfors, with Gary Jones second as top American.

When the Inter-Am Series ended it was back to stand-alone AMA Nationals, and on September 2 the series resumed on the infield of Alabama International Speedway, or what we now know as Talladega. The track was built by Gary Bailey, just as he was the builder of the Daytona track earlier that year. Bailey was also the winner of the 250 class while Lackey, now on a factory Kawasaki prototype, won the 500 class. And because the Trans-AMA Series was soon to start, and the 250 class to revert to a support class, the Talladega race would be the last round of the 1972 AMA 250 National Championship. Gary Jones was named champion, even though he wasn’t actually there at Talladega, his points lead was insurmountable.

Now began the 11-round Trans-AMA Series, which would include European superstars like Roger De Coster, Heikki Mikkola, Bengt Aberg, and Ake Jonsson, now riding for Maico. It was Jonsson who would dominate, winning the last nine races in a row as well as the title. And the top American in most of those races would be Lackey, fully aboard a Kawasaki now. Lackey was top American in seven different rounds, so he’s considered the winner of the 500 Nationals on those days, despite having a high actual finish of fourth place. When the series finally ended on December 3 at Saddleback Park, Lackey had more than doubled the points of the next-highest points scorer of the whole series. The runner-up? Once again Gary Jones, who rode the 11 Trans-AMA races and usually finished very close to Lackey.

When all was said and done, the 1972 AMA National Motocross Championship was deemed something of a success, and still a work in progress. You can see the final points standings for each class, as well as all of the individual race results right here in the Racer X Online Vault.

One year later the AMA decided not to include the Trans-AMA races as they felt that the nationals would need to begin to stand on their own. Enough promoters were beginning to show interest in hosting a race, plus skipping the Europeans in the results was quite confusing. They would keep working with Edison Dye's Inter-Am Series for a couple more years, but it was losing traction in the marketplace. Gary Jones would in '73 return to defend his 250 title, albeit on a brand-new bike—the first Honda CR250M Elsinore. As for “Bad” Brad Lackey, he would not be back in ’73; turns out he was impressive enough in ’72 to earn himself a full-time ride in Europe aboard a Kawasaki. But we’ll talk more about that tomorrow as the countdown to the 2022 MAVTV+ Countdown to the opener goes down to 49 days and we tell you about 1973, the second year of Lucas Oil Pro Motocross.