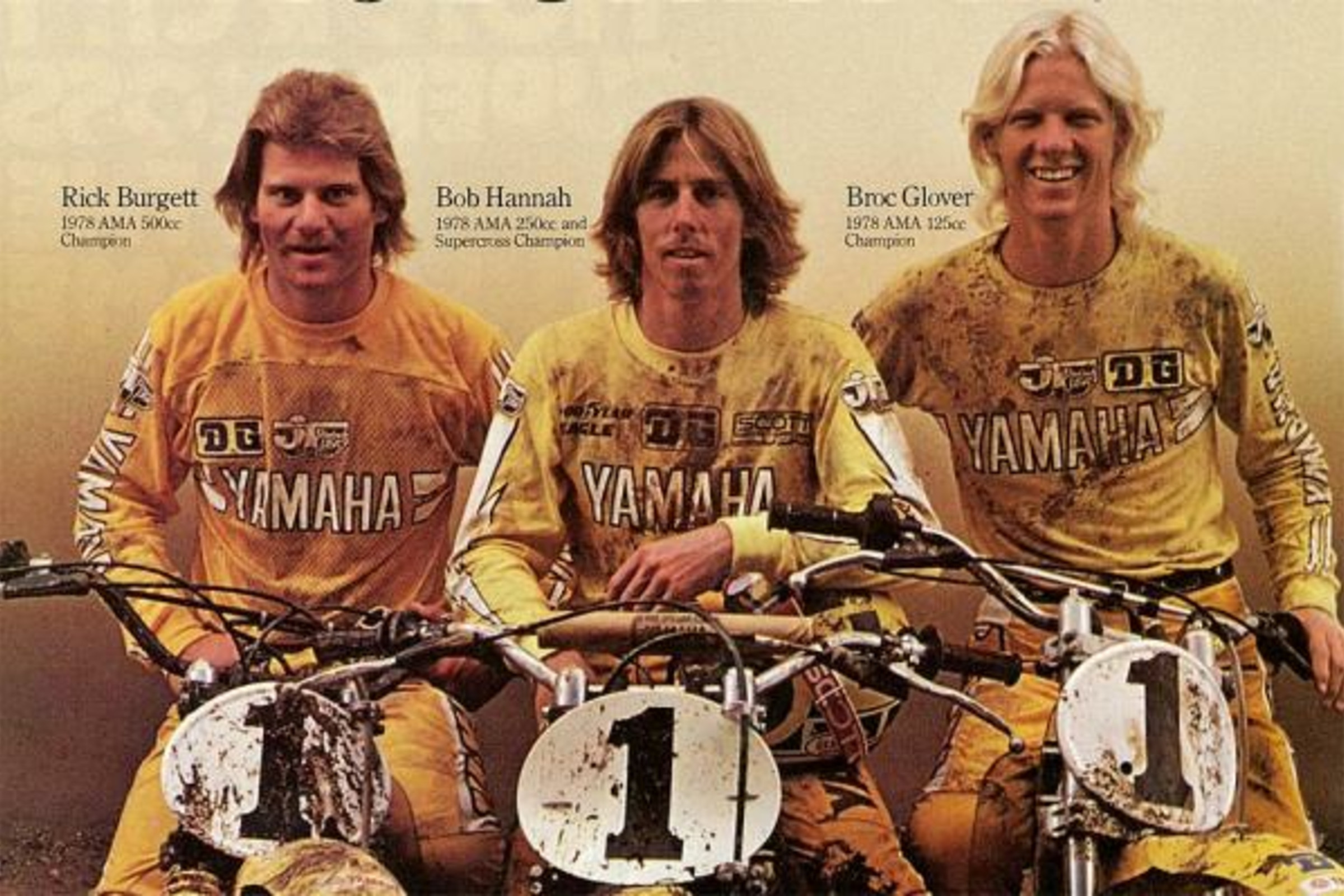 Welcome to another day down on our MAVTV+ 50-Day Countdown to the kickoff of the 2022 Lucas Oil AMA Pro Motocross Championship, which is celebrating five decades this summer. We are going year-by-year from the beginning in this countdown, starting with 1972. Today we are 44 days away, and we’re looking at 1978—the year of the Yamahas.

Going into the ’78 season Yamaha had two defending champions on the AMA circuit. Bob Hannah was the AMA Supercross #1 and Broc Glover was #1 in the 125cc Nationals. They also had a couple of other big-hitters in their lineup in Rick “Lumberjack” Burgett and Mike “Too Tall” Bell. With Glover obviously capable of winning in the 125 class, Yamaha moved Hannah up to where he belonged—in the 250 class outdoors.

The season started with a flurry of AMA Supercross events, the first four of which were won by Honda riders. Honda had hired two top riders from fading teams in Marty Tripes (who was with Harley-Davidson in ’77) and Jimmy Ellis (Can-Am). They also had team captain Marty Smith, plus the veterans Jim Pomeroy and Tommy Croft, and top new prospects in Steve Wise and Warren Reid. That’s a big team! And from the start they were good, as Ellis won the opener at the Seattle Kingdome, then Tripes topped the Atlanta round at the old Fulton County Stadium. Next was Daytona, a race many figured would be the one for “Hurricane” Hannah to begin to assert himself. Instead, it was Tripes, Smith, and Ellis who gave Honda a 1-2-3 podium sweep. Hannah was fourth. However, Hannah was about to start one of the hottest streaks in AMA history.

First, Hannah swept the SX doubleheaders at the Houston Astrodome and the Pontiac Silverdome. The SX/MX schedules used to overlap back then, so everyone spent the next month doing outdoor nationals at Hangtown, Racing World (next to Saddleback), Rio Bravo, Omaha, and Southwick. Hannah won every time. Then it was back to supercross at Pittsburgh’s Three Rivers Stadium, then the Superdome in New Orleans, both of which Hannah won. The next three rounds were outdoor nationals at Lake Whitney, Sears Point, and Cycle World USA in St. Louis, all three of which Hannah won.

Finally, on June 24, after going undefeated in both SX and MX for more than four months, Hannah got beat at the Superbowl of Motocross at the Los Angeles Coliseum. Who beat him? Another Yamaha rider of course, in first-time winner and future champion Mike Bell.

Here’s a cool short video about Hannah and the late Bell at that ’78 Superbowl by Todd Huffman for Yamaha USA:

By this point Hannah had clinched both the ’78 AMA Supecross title as well as the ’78 AMA 250 Pro Motocross title. Meanwhile, his other two teammates, Glover and Burgett, were pulling away in their perspective classes. Glover won more than half of the 125 Nationals on his way to topping Kawasaki’s Gaylon Mosier for the title, and Burgett did likewise in the 500 class. This gave Yamaha a clean sweep of the 1978 AMA titles: Supercross, 125 MX, 250 MX and 500 MX. And if that were not enough Hannah also won that fall’s Trans-AMA title, becoming the first American rider ever to do so.

Other riders weren’t so lucky. Marty Tripes started out hot on his Honda but then got himself hurt. Marty Smith and Jimmy Ellis also went down early, as did three-time AMA 250cc Motocross Champion Tony DiStefano, in a first-turn crash at the Houston Astrodome that cost all of them time on the sidelines. Of the three, only Ellis would ever win another major race.

Check back tomorrow when we take a look at the last year of Hurricane Hannah’s reign, 1979.