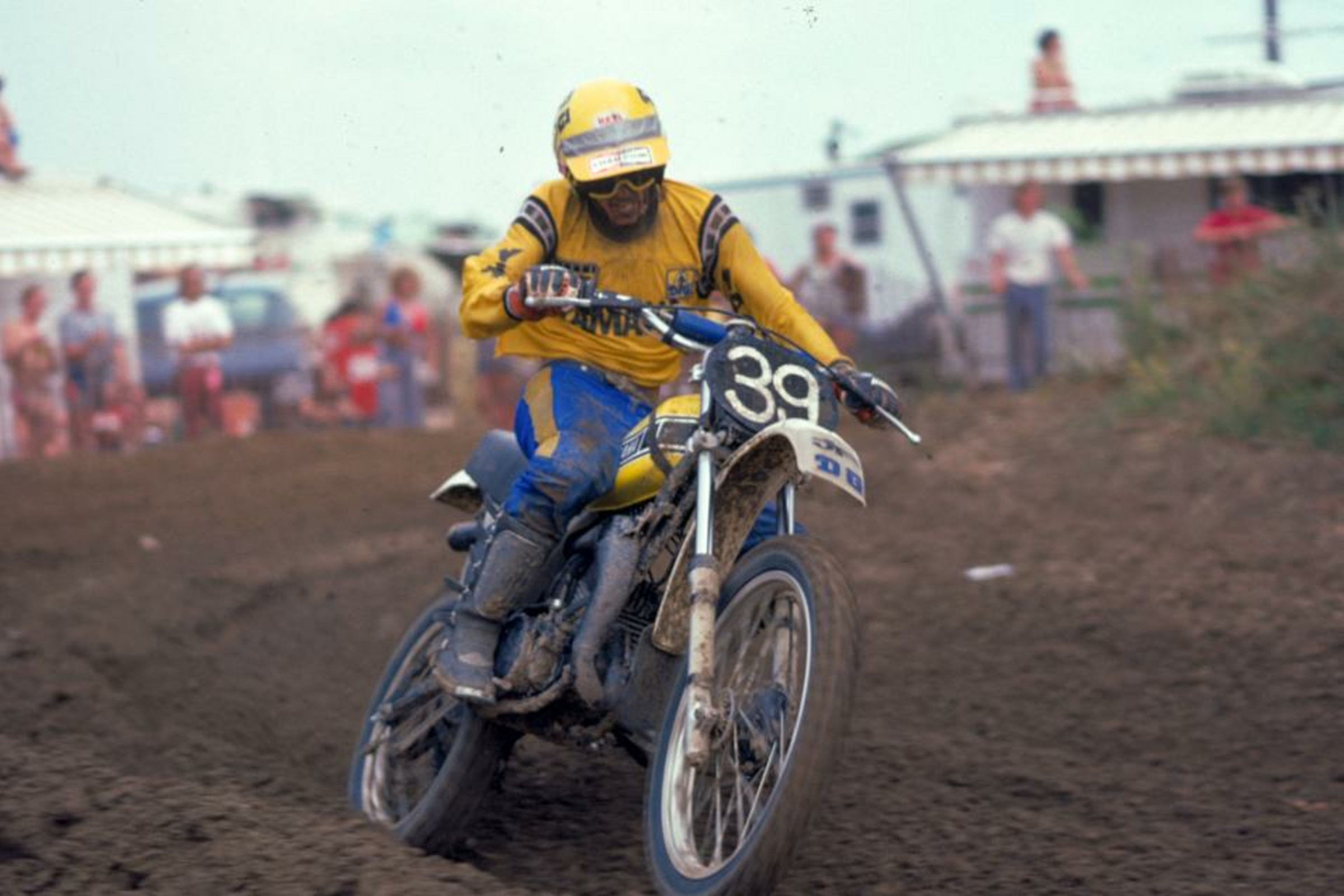 Welcome to Day 46 in our MAVTV+ 50-Day Countdown to the start of the 2022 Lucas Oil AMA Pro Motocross Championship. We are celebrating 50 years in existence, one year at a time. Today, we are at an extremely pivotal year: 1976. This was the year that American motocross really began growing up, as the influence of the still-incubating AMA Supercross Championship was beginning to have its effects on not only the riders but the industry in general. And if there is a single word that sums up just how game-changing 1976 was, it’s “Hurricane.”

For all intents and purposes, the ’76 season began on the rough, sandy tracks of the Florida Winter-AMA Series, a seven-weeks long off-season tour that had become the “spring training” of AMA Pro Motocross. It was there that the world found out for the first time about a heretofore unknown California desert rat named Bob Hannah. A rank-and-file local pro in ’75, Hannah had been signed by Yamaha to take on the mighty Marty Smith and his works RC125 Honda. Smith has easily won the first two AMA 125cc National Championships and was heavily favored to win a third. But Yamaha had two new secret weapons: the water-cooler OW125 and Bob Hannah.

Florida was the place that Hannah chose to prepare for his impossible mission, moving east to the Sunshine State along with his new teammate Rick Burgett of Oregon. In Florida, and on ridiculously rough tracks like Cocoa Beach, Brooksville, and Jacksonville, Hannah and his teammate Burgett sharpened their teeth in anticipation of a surprise attack.

Smith, meanwhile, had his own plan of action for 1976, and it was an ambitious one. Having gotten a taste of the FIM Motocross World Championship in ’75, when he dominated the USGP at Mid-Ohio, just as he did on the AMA tour. Smith and Honda decided to try for BOTH titles, racing AMA 125 Motocross and FIM 125 Grand Prix races. These were the pre-European Union days of red tape, currency, and language exchanges, and the world being a much bigger place. Marty soon realized that he had maybe bit off more than he could chew, as not only was Belgium’s Gaston Rahier lying in wait in Europe, the completely unforeseen Bob Hannah was priming himself for a surprise attach in America, on Smith’s home turf.

All of this would begin to unfold in Florida, where Hannah romped in the Florida Winter-AMA Series, just not in the 125 class. He was saving that stun gun for later. Hannah, who was being followed by the superb moto journalist Jim “Greek” Gianatsis, cut a swath through Florida that led Gianatsis to start calling Hannah “Hurricane,” a nod as much to Florida’s notorious late-summer weather as Hannah’s superb fitness and speed. He was the full package that Smith has yet to meet up until this point in his career.

With Smith staying in California to train that winter, he had no idea of the swath of terror that Hannah was dropping on everyone in Florida. Instead, Smith’s introduction to the relatively unknown Bob Hannah would come at Hangtown in Plymouth, California, the first round of the AMA Nationals in early April. It was there that Hannah, who had never been near a podium to that point, straight up out-ran Smith in both motos, dominating the day on his Yamaha OW125. And before Smith (who broke down in one moto and finished second in the other) could even start to respond, Smitty was on his way to Europe to face another fearless opponent in the aforementioned Gaston Rahier.

The rest of that season’ 125 Nationals would go the same: the over-extended Smith would be beaten by Hannah and others, like Fox Racing Honda’s Steve Wise and young Suzuki rider Danny Laporte. Smith couldn’t even race the same bike in both series as Honda was worried that with the AMA’s claiming rule they would lose his full-works 125 Type II, so he kept racing the RC125 in America. In the end Smith didn’t win a single national, though he did win a 125cc Grand Prix in Denmark. And when the two worlds he was trying to conquer together met at Mid-Ohio and the Valvoline 125cc USGP, Smith beat both Hannah and Rahier.

While Hannah was knocking off Smith in the 125 Nationals, and Rahier topping him in the 125 GPs, others were left a wide berth to assert themselves in the 250 and 500 classes. Tony DiStefano won a second straight AMA 250 Pro Motocross title with Suzuki while Husqvarna’s Kent “the Rhinestone Cowboy” Howerton was chalking up the 500 title. Also, “Jammin’” Jimmy Weinert, again back on a Kawasaki, gave the brand its first AMA Supercross Championship.

Finally, at the end of the year, Suzuki’s Roger De Coster once again served notice that Europe was still better when he won his third-straight Trans-AMA title. But Hannah was coming, and the European masters were about to get beat at their own game. More on that tomorrow as we continue counting down the 50 days until 2022 the Lucas Oil AMA Pro Motocross Championship.