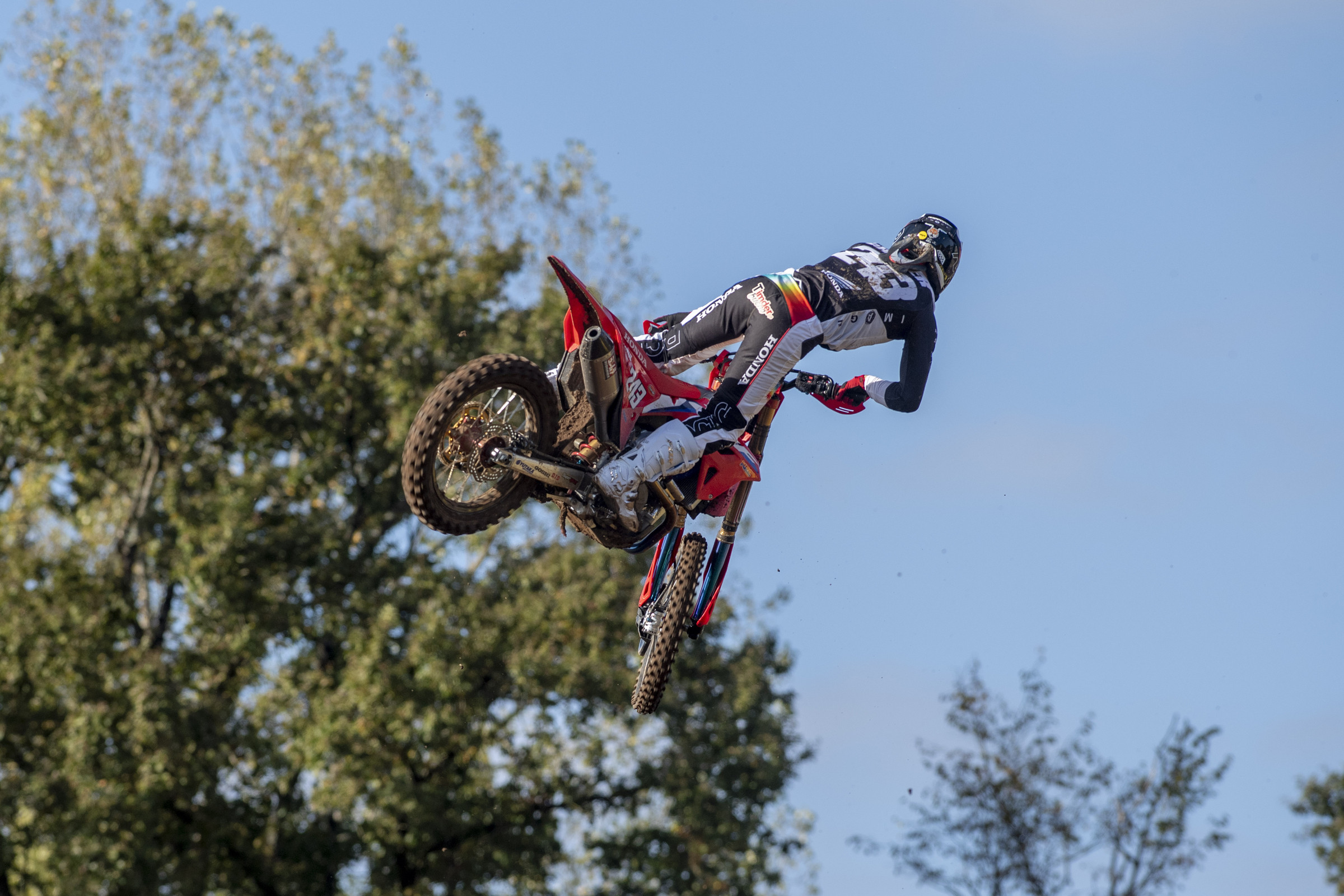 Tim Gajser still finds time and the frame of mind to laugh his way through an interview. At last weekend’s Grand Prix of France (round 12 of 18), the 25-year-old Slovenian was in demand. Lacapelle-Marival was packed with fans both at the fences and the team awnings in the paddock. It is the first Grand Prix in 18 months without any influence from pandemic restrictions.

Outside the HRC hospitality Gajser’s CRF450R is now fully ‘red’ after a mad month. Three weeks previously Gajser had crashed while training and broken his left collarbone. He underwent surgery, managed a couple of precautionary laps on the #243 machine and then packed his bags and his hopes for round ten and the Grand Prix of Sardinia. In typically determined style he toughed out a 12th place finish and could breathe again as the mid-season anomaly that was the 2021 Monster Energy FIM Motocross of Nations brought a moment of respite to the MXGP calendar that then entered a run of eight GPs in six weeks.

A relieved Gajser returned in more customary form at Teutschenthal, Germany for round 11 (one week prior to the first visit to France since 2019) and profited from Jorge Prado and Jeffrey Herlings’ controversial collision to grab his fourth overall win of the year and even the checkered flag in the second moto. Gajser went from second to first in the standings; regaining the red plate on the Honda that he had held for most of the season as the frenetic nature of the contest continued. In France, he would lose it again. Jeffrey Herlings’ fifth win and the presence of Romain Febvre (runner-up) alongside the Honda man on the podium in Lacapelle meant Gajser dropped down to third but with a paltry 10-point gap.

Gajser has been the strongest and best MXGP rider since he entered the class in 2016. He’s brought consistency to all-conquering speed and has outlasted the likes of Herlings, Antonio Cairoli, and Febvre to notch three titles in that time, while also developing a new Honda on the way.

The year 2021 could be the hardest—and most satisfying—gold medal of them all.

Racer X: Missing the Nations worked out quite well. It meant you could use the only break before the end of the season…
Tim Gajser: Exactly. From the beginning I knew I wouldn’t do the Nations because of the weird scheduling but it definitely was a good break for us. It was only 14 days, but it was good enough to feel much better with the injury and it was improving quite quickly. We were working a lot with the physio so I could have less pain and before Germany I was in a way-better position than before Riola [Sardo, Sardinia]…even though I was a bit surprised to take the overall at Teutschenthal. Especially to win the second moto: I wouldn’t say it happened easily there but everything was clicking and I was enjoying myself. It was a confidence booster that I could win without having to push too much.

Someone said you broke the collarbone without even crashing…?
No, I crashed!

Was the break quite bad?
It was a pretty clear one. The bone was completely snapped but there was also a two centimeter crack and they were afraid of that. Normally when it’s a clean break then they reset the bone and put a plate and screws and that’s it. With me they also had to fix the crack, so I had an extra screw for that. Also, I have a larger plate than usual. When I went to the hospital, I knew the doctor and we had a meeting before the operation. I asked him what he wanted to do but also said the only really important thing was to be able to race a few days later in Sardinia. He was smiling! He didn’t expect that request. So, there is a pretty big plate there and extra screws.

Can that all be removed at a later date?
Yes. I don’t know when exactly, but I don’t think it will be this winter because there is not enough time. The off-season will be only two and a half months after the injury, and they say it should stay there for eight months. So maybe the following winter.

Apparently, the fitness test at the Grand Prix of Sardinia was pretty severe…?
Wow…I don’t know what they were doing there! I knew I would have to make a check with the doctors, but that guy was weird. I had to remove my shirt and all the dressings—when the scar was still quite fresh because it was only eight days after surgery and all the stitches were there and the blood was still coming out, it wasn’t so nice—and he started pushing and pulling and then started pushing on the bone. I was like “S**t!” He asked me “Is it painful?” and I said [grits teeth] “No, no…!” Marcus [Pereira de Freitas, Team Manager] and Filippo [Camaschella, Team Physio] were with me and walking back to the truck we were like, “What just happened?!” I had to go and see the guy after Free Practice and I was worried he’d start pushing the bone again. I asked him not to, and told him I can do push-ups or any exercises he needed. It was a strange experience. I guess they were just doing their job.

The season has been incredibly close. Obviously, there are normally benefits to having a massive points lead but does the racer and the fighter inside you enjoy this tight battle for the championship?
[Laughs] It’s obviously better to have a big points lead, you can ride freer and more relaxed but it is what it is. It hasn’t been this close for many years. Everybody is a bit nervous. We all want to win, that’s normal. We are all here for this purpose. I think all of us have been injured this year already except for Romain [Febvre]. There have been ups-and-downs for all us and it’s been interesting so far. All I can do is try to stay consistent. I’ve said many times that the one who will win the title will be the one that makes the least mistakes, especially from this point of the season.

Starting a moto, are you starting to think about where the others are?
We all know that the top five guys are really fast. Even if we have a bad start, we can come back somewhere near the top ten. There are no tactics at the moment. It’s a case of going out there and trying to win, that’s the goal while also trying to stay calm and clever. You don’t want to make the margin of risk too big. It’s a balance of pushing, knowing when to push, and when to settle for something because one little mistake can cost a lot of points.

Winning any championship must be rewarding but to obtain one when the competition has been so close must feel very special…
Yes, definitely. In the past—and with the titles I’ve won so far—they’ve been towards the end of the season and have meant that I was able to have fun just controlling the championship lead and stuff like that. This is almost a first time for me. I think it’s the same for guys like Jeffrey and Romain, I don’t think any of us have been in this kind of situation. When we won, we’d made a big points lead…now we are all there. It’s quite tight!

In 2015 and the first world championship, in MX2, was a close one for you…
That’s right! It went down to the last moto in Glen Helen. I had to score one point if he [Pauls Jonass] was winning. I’d forgotten about that one. That’s been the closest for me so far.

There are six races left. One in Spain and five in Italy, three of those taking place at Arco di Trento which, in the past, has often been full of the yellow Gajser supporter club. I’m guessing that you will count on a big backing this time? It might be like having three Slovenian GPs!
[Laughs] I’m super-excited. Last year it was a bit sad. Of course, we were happy to be world champions there, but it was empty and everyone was watching it on TV. So, it’s definitely nice to have public back. Last week in Germany was the first time we had such a big crowd and fans in the paddock. It’s such a nice feeling and we all appreciate this way-more after the last two years. It hasn’t felt like “racing.” Okay, we were battling on the track, but it seemed much more like a job. It’s a nice feeling to be signing and taking pictures and interacting with the fans again.