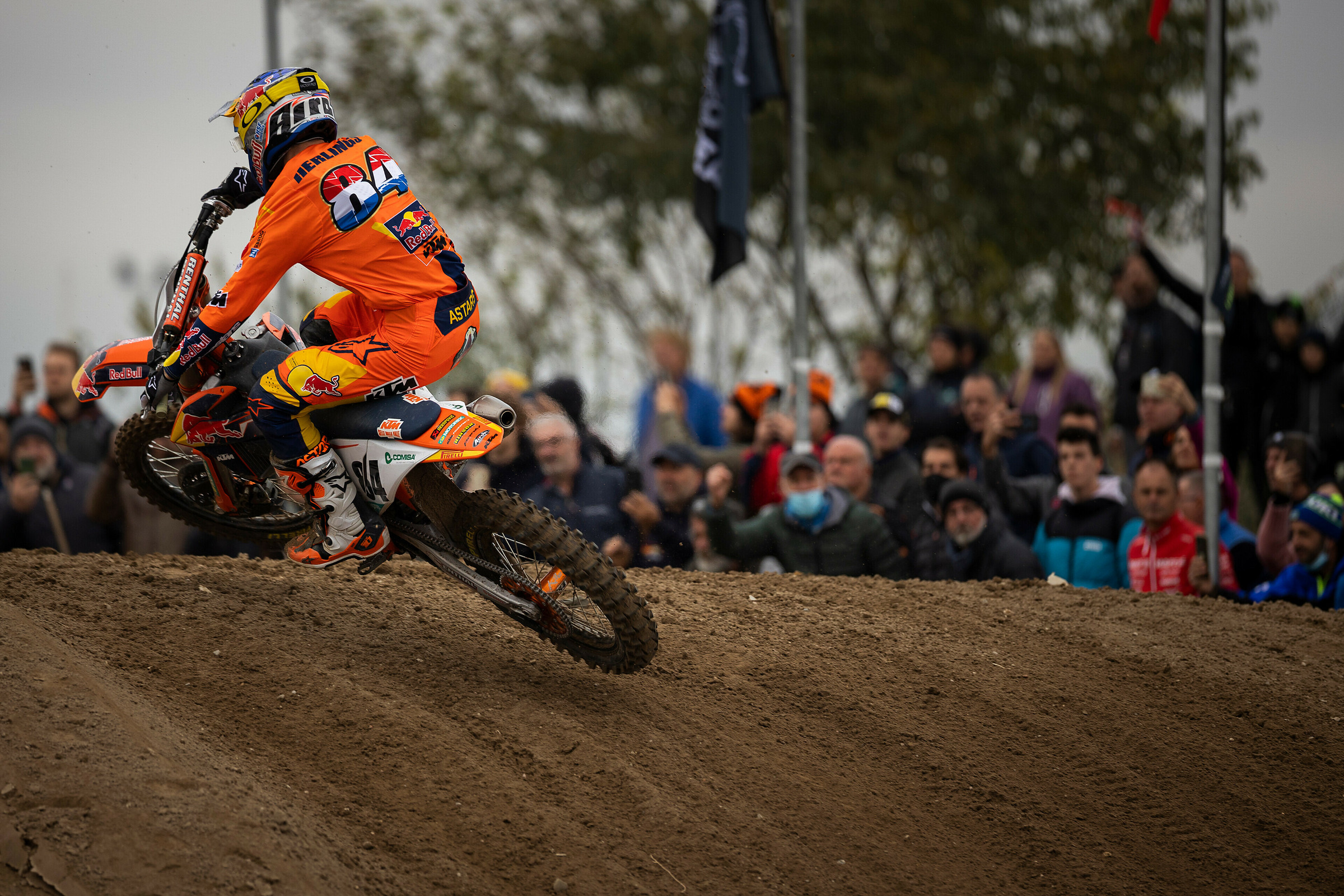 Red Bull KTM’s Jeffrey Herlings doesn’t have to prove how fast he is. He now has 99 Grand Prix wins which puts him second all-time, just two behind the great Stefan Everts. But what Herlings has struggled with over the years is closing the door on championships. This year was no exception after a broken shoulder blade suffered early in the season set him back in points, and then even when he had somehow clawed all the way back to lead the series, a first turn crash at the MXGP of Pietramurata with just four rounds remaining saw Herlings’ reasonably comfortable championship lead completely dissipate with a DNF. He had to respond and coming into the final race at Wednesday’s MXGP of Citta di Mantova, Herlings sat three points behind title rival Romain Febvre. But the Dutchman did what he’s done so many times before and won, but this time the win was for all the marbles and Herlings held strong. After clinching his second MXGP title and fifth World Championship overall, Herlings spoke with the media in the press conference about how grueling this 2021 championship success really was.

Racer X: Congratulations Jeffrey! For you to win this championship, it hasn’t been an easy one at all. You had to overcome injures, bad luck, the lot really, but today it paid off.
Jeffrey Herlings: Yeah, definitely. I’m super happy but at the same time I feel gutted for the two next to me [Febvre and Gajser]. I know how it feels. It feels like the end of the world when you miss out on a few points at the end in the past. So, I want to thank both of them for a great championship. The bad thing about our sport is that only one of us can win. But yeah, they’ve been great, and I respect both of them to the moon and back. Furthermore, today was good. There was definitely pressure, like I haven’t slept for a week. You keep [thinking] scenarios if this happened or that happened. What are we going to do if this happens or that happens? But at the end of the day, nothing really happened like I thought it would and we won this championship. It wasn’t an easy one. I think all three of us kept charging until the last moto, especially me and Romain in this case of the last two races. The pressure was on, you know. So, I didn’t crack under pressure, I made the championship happen. I did get two points from Tony [Cairoli], but I managed to win the championship by five, so even without the little gift, I still would have won the championship. So, I’m happy with it. It was the most difficult one ever. I needed nerves of steel the last weeks, but we made it happen.

In those final laps of the race, what was going through your head? What were your thoughts?
My riding was terrible because I just didn’t sleep for like three days probably. First moto, I was just so scared of crashing that I just started riding so crampy and had arm pump and the riding was bad. Same in the second moto, at one point after four or five laps, Romain crashed and I was like, “Okay, Tim is in second.” On one side, I didn’t want to go full gas, I wanted to ride in my comfort zone, but I was thinking and thinking and thinking and Tim kept getting closer. I just kept doing my thing and didn’t look back and just tried to ride like a training moto to make sure I didn’t go down because that was the only thing that I could miss the championship with. So yeah, very happy to have made it happen. And to go 1-1 on the day, even though my riding sucked today, is still really good.

You won a championship by domination in 2018 and this one was completely different. What are the first emotions comparing the two?
For now, I don’t really have emotions. I think it hasn’t really gotten to me yet. But in 2018, we saw it coming. It was just a matter of not getting injured. So, I just knew I was going to win the championship because I was leading by ninety-something points and waiting to get it done. But this one, you know when I was on the ground over there on Sunday and in 15th, I thought the championship was gone. So, I had a lot of bad luck, but I had luck with my crash in Arco that for some reason I stayed safe, and the bike didn’t get more damaged, even though I did have bad luck with that start crash. How many times after a start crash do you have to DNF? Same here, my seat was completely loose on Sunday, but it didn’t come off by some miracle. Yeah, to win this championship, it’s unbelievable. I think tonight when I’m lying in bed I’ll think, “We’ve finally done it!” But it’s the middle of November and we know that in three or four months we probably have to start racing again, so there’s not too much time to enjoy it. But once again, I feel the pain of the boys next to me and I feel gutted for them. But on the other side, I’m happy for myself to have pulled it off. In 2014, I lost the championship by four points with a broken femur, so I know the feeling. I lost it many times when I was leading by a big margin like 2015 and 2020. So, this one is a special one.

You’ve made an amazing show for all these people this year. What’s it been like dealing with the pressure of knowing the smallest mistake, or the smallest incident like what happened with Tim, could cost you points. I mean, could you push for a championship like this every season?
The last few races definitely were tough because we had so many races to do in such a short amount of time. I still say the one-day format gives better racing. By the second moto on Sunday many times, riders are already tired. So, like eight out of 10 riders really like the one-day format. Due to that, I think there was less injuries. If you look to the past and see how many injuries there were and then how many injuries there were this year. They definitely look at the ticket sales but look how many people just want to come for a Sunday. Two days to watch racing from nine to five, you know, it’s a long day. So, I think one day is better for all of us. This year, the championship was really good. I think it’s never been so close with three riders. It was a tough year mentally for all of us. I had an injury and missed three motos. You know, Tim wasn’t his normal self with the broken collarbone, so I think just Romain got off pretty safe this year, but it’s hard winning championships and not getting injuries.