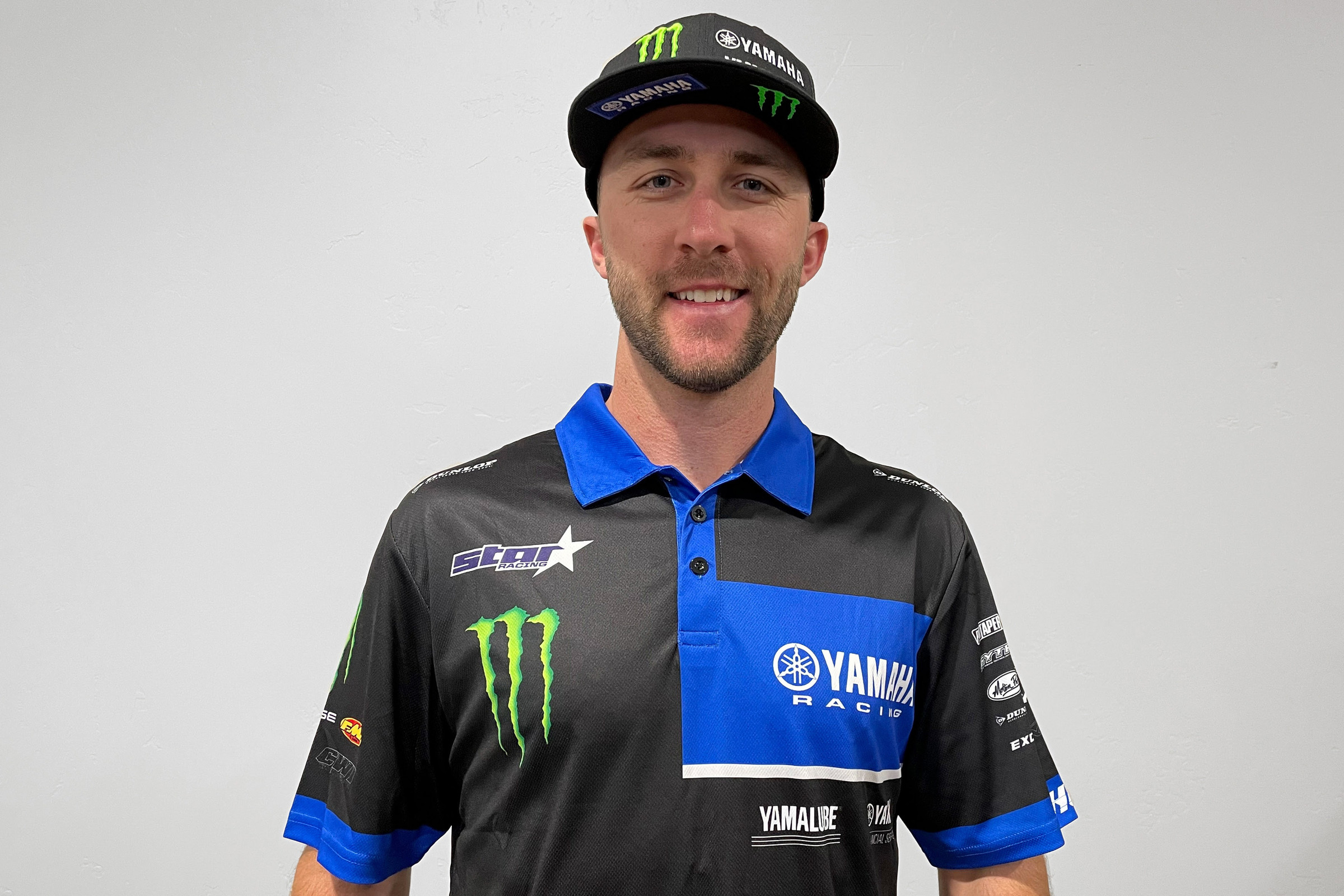 The long countdown to October 1 is here, and Eli Tomac can finally talk about what everyone knew was coming: he will race for Monster Energy/Star Yamaha Racing for 2022. Yamaha arranged an interview with Eli for us this morning, just as the press release hit with the official announcement.

Here’s what Eli had to say.

Racer X: Eli, first thing to know is, is it just a relief to be able to tell you side of the story finally? You’ve had to carefully dance this dance all summer without saying too much. So, is it a relief to get to this monkey off your back and talk about it?
Eli Tomac: Yes, but at the same though, my time with Kawasaki ended on a good note. I mean yeah, we can chat about it, but I’m not going to get into any crazy detail about why I’m going to Yamaha, and why I made that switch.

Well, Kawasaki announced early in May that you weren’t getting back together, and then the first few motos of the motocross season weren’t going well. I think that led people to wonder if there was a problem there. But then you got back to winning at the end of the year, they gave you a gift at the end of your last race to celebrate your wins and titles, and then they really praised you on social media this week. So, it seemed like it ended well.
Yes, it did. On a professional level it did end well. Like I said, it’s basically on a business level, if you want to move on, you just have to make that decision on your own and move on and try to do what’s best for yourself. As a racer, our careers are very short. I felt like making the move could even accelerate my career to another level. Some people might think that’s a little bit crazy at this point in time, but I didn’t feel like I was ready to just settle for anything. It basically came down to not settling, and wanting a little bit more.

So, you had an option to return to Kawasaki? This wasn’t like they turned their back on you or you turned your back on them. You had an option to stay?
Correct. We had an offer on the table. I don’t know how much farther than that I can go. It was basically like “If you want to stay, you can stay. If not, at that point it’s your choice to go elsewhere.” That’s how it went.

Well, I think that actually says a lot. You didn’t go to Yamaha because you were forced to. You wanted to make this decision. Was there something about this team, or just having a fresh start, regardless, with any team?
Yes. It was basically coming down to, hey, I felt like there were some areas where I could be better. I don’t want to go into too much detail.

So, this is a performance decision. This wasn’t about more money or that you had nowhere else to go.
Yup. It’s strictly a performance decision and basically as a racer, and an athlete, did I feel like there was something else out there that could potentially do better for myself and help me try to win more races? I obviously now still have to go prove that. It wasn’t a monetary decision, and it wasn’t Kawi saying, “Hey, we don’t have anything for you, see you later.”

So, the strange thing is, when you’re making your decision, this is essentially a first-year team in the 450 class. Now we’ve seen them have great success outdoors as [Dylan] Ferrandis and others did really well. But you made this decision before that. What made you feel comfortable with this team that didn’t have much of a track record at that time?
Yes, at that time, it looked like a big roll of the dice. I think with the motorcycles nowadays, I think if you have the right team in place, you can make a lot of things work in a lot of different ways. As a racer, you look at the team. Yeah, you have to look at the base you’re working off of, but in our league, you can do a lot of things to the motorcycle to fit it to you. From that aspect, I feel like they have the ability to get things done. Can these guys make something fit for me? I feel like they can do it.

Hey when you see Ferrandis and [Aaron] Plessinger and [Christian] Craig putting in good rides, and you’re literally racing against them watching it, did that give you a little peace of mind?
Absolutely! [Laughs] At least it’s like, hey, I know they can make this happen, it can actually be done. That was really cool to see. Really cool. Hopefully we can do that in both supercross and motocross.

Well, that’s the thing. It was still their first year. The team did good outdoors, but do you get the sense that they’re still just getting started and can keep improving?
Yes. It’s good they have a year on that platform. It’s always when you come straight off of a brand-new base, they’ve had a year to really dial it in, and I know down the road they will make it even better.

When we see what is the called the “change of scenery,” it’s usually looked at like the rider is trying to relight the fire. But it doesn’t sound like that for you. You’ve been saying this over and over this season. You want it just as much as you always have. You’re trying just as hard. It wasn’t just, “I’m feeling kind of blah and I need something to be excited about.” I think people might have thought that’s why, but it doesn’t seem like that’s why you’re doing it.
No, that was not the reason at all. At this point I’ve won everything that can be won. I guess you can say des Nations I haven’t won, but for our American series. When I’m this old, I didn’t need to prove anything. It wasn’t a move just for change of scenery. It was just, “What do I think is going to give me a better opportunity of wining on the weekend?” Can I keep improving what I had? That’s what it came down to. I felt like I was getting a little bit stuck with what I had. Not in a way that we were fighting or anything, but hey, I’m going to make this move because I think I can win races easier here.

If you rode out to the end of your career with Kawasaki and had this storybook ending, that would have been nice. But would you always have been left wondering, “I wonder what would have happened if I had tried something different?”
Yes. That’s another thing that was right on my mind. We all talked about it. I had the opportunity to try this, and I don’t want that question in the back of my mind. Could I have won even more races or done it in an easier way? Those were the conversations that were had, and it’s a gamble on my part, either way! [Laughs]

I heard an interview you did on DMXS radio with David Izer a few weeks ago. You said these were tough, tough decisions.
Yeah, and it’s because you build a relationship with your team. You get to know people on a personal level, and that’s what makes it hard. When it ends good on a personal level, and then that mixes with business, that’s what makes it tough. But then I always look back and think, hey, if I wasn’t performing, you know you would get the boot anyway. You have to do what’s best for you at this point in time. As an athlete you only have X amount of years to perform, so I have to take the chance now.

We know Ricki Gilmore, the suspension tech, is over at Star now. He’s a cool guy and I know you had a long relationship with him in the past. I’d assume that’s part of this decision? I don’t want to put words in your mouth. Was that part of this?
Yes, that’s a part of it. When you look at the whole thing, I’m not going to go somewhere where I don’t know anyone and just wing it. You have to dissect the whole team that way. Is it going to work? Yes, we work really well together, we worked together in the GEICO Honda days. We communicate well. It’s important to be on the same tune, as a rider and a suspension guy and chassis guy and all that. It just makes things more fluid when you’re looking for something.

So this team is moving their race shop and operations to Florida. Does anything change for you and your program or are you staying in Colorado?
Our test days will be in Florida. I’m actually really looking forward to that, just having test days on different tracks and different soil. But home base will still be Colorado.

Hey, have you ever done that before? Is Florida a new thing for you.
Yeah, basically what we’ve always done is test out in California, so now we’ll be doing that in Florida.

You and your dad always talked about not doing too much too soon when you were younger, to not get burned out. So here we are. I feel like you’ve been asked about this over and over, but you know riders at your level with your success usually start retiring around this time. You are saying you’re as motivated as ever. So does this go back to doing less when you were younger, or do you think you just see things different than others?
It’s all of those things you just said. Yes, early burn out can be a factor. But at the end of the day you have to love what you’re doing, period. I still love motocross, I still love riding and being on a motorcycle. It’s my escape and what I love to do. I know it’s dangerous and that’s why guys hang it up, too. But I still have that burn to go for those checkered flags and those wins. And that’s why I’m still racing.

Listen to this interview in the latest Exhaust Podcast: