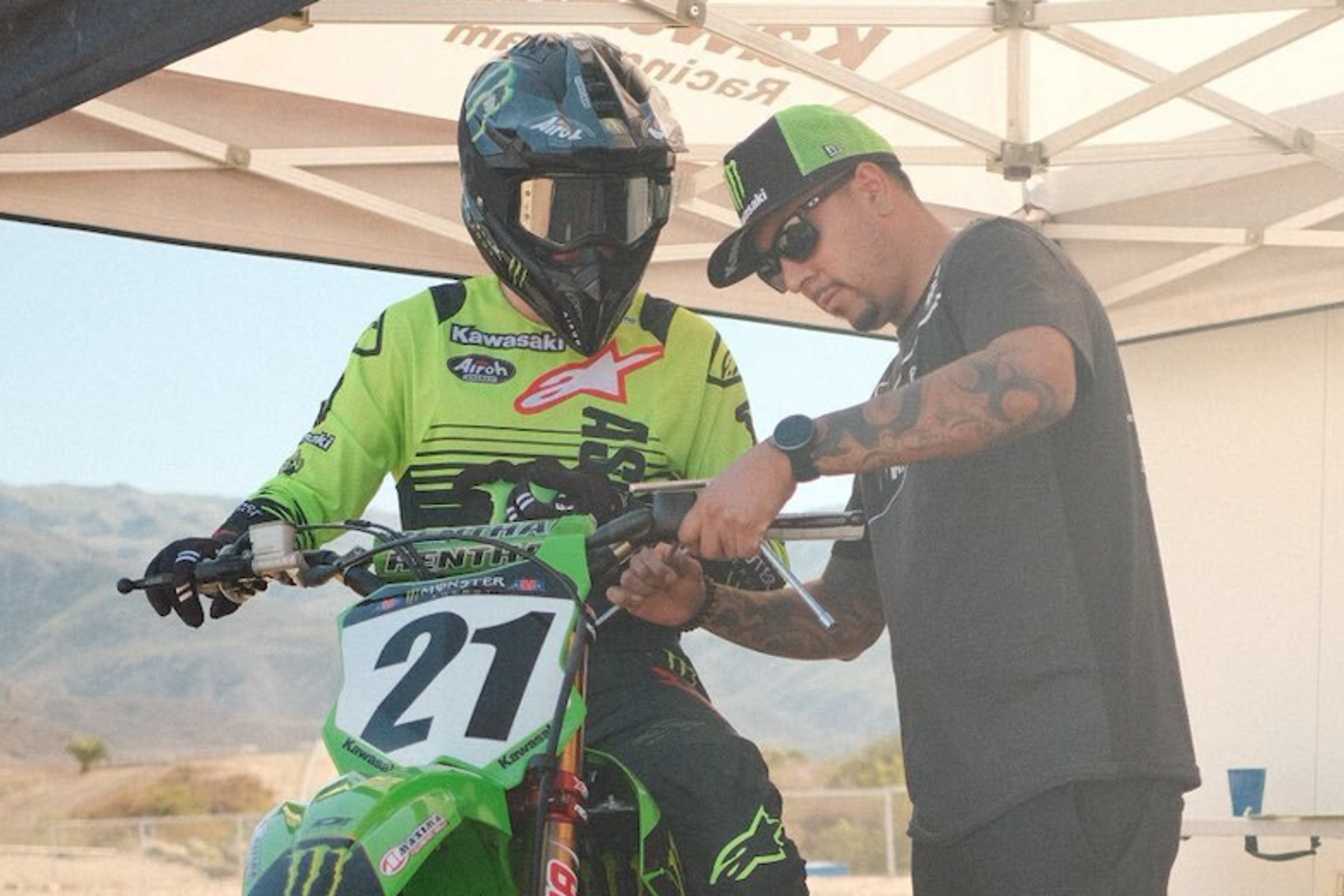 Kris Keefer: Honestly, I heard about this at the start of the outdoor series, and I was really taken back. I assume Tomac maybe has one or two more years and then he's out, right? To finish off his career with Blu Cru really says something about how much he liked the YZ450F or that he was simply just done with Kawasaki. Maybe a little of both? I do know that Ricki Gilmour (KYB Suspension Tech) is a huge part of why Eli would even consider going to Star Racing. Ricki has had a relationship with the Tomacs for a while and Eli seems to trust him with his thoughts as well as direction of suspension thinking. Now as far as how Tomac will do, I do feel like he will still be the same Tomac in SX with his blazing speed, bad starts and late race charges, but I do think he will get back his #1 plate in the Lucas Oil AMA Pro Motocross Championship in ‘22. That’s right! With the way Star has upped its game on the Yamaha outdoors and being that Tomac is heading toward the final season or seasons of his career, I assume he wants to do the Peyton Manning and leave the sport on top! I think he gets the Pro Motocross title in ‘22 and sets off into the hills of Cortez, Colorado.

Jason Thomas: The Tomac switch to Monster Energy/Star Yamaha Racing came as a complete shock to me. I actually believed this would be Tomac's last season. He has accomplished most of, if not all of the goals racers would ever set out in pursuit of. He has been the face of Monster Energy Kawasaki for the last half decade and they have brought each other four championships along the way—three Pro Motocross (2017, 2018, and 2019) and the 2020 450SX title. To completely switch proverbial gears at this late point in his career was just not something I even considered.

The real question here for me was on the motivation side. Was he stuck in a rut and needed change to continue on? That could certainly be the case. Does he feel that the Yamaha is a step forward equipment wise? Possibly, I suppose, but I believe the Kawasaki to be highly competitive. I still find it a curious move and without any clarity from Tomac himself, we are left to guess. If pressed, I would assume he needed a change of scenery. I believe he has regressed since June of 2020. He was inarguably the best racer in America as we left Salt Lake City's seven-round finale. He has followed that up with three championship campaigns which feel subpar to what we have come to expect from Tomac. Perhaps this change is what he feels is necessary to regain that form.

Steve Matthes: Count me as surprised this happened, ET seemed like a lifer at Kawasaki but when I broke the news on this earlier this summer, I was talking to people close to the situation and really, this seems like a case where John and Eli are looking to have a bit more control on the motorcycle. It's not a jump for money, it's not a jump for a better "team" per se, it's just they were, at times, frustrated with how Kawasaki would approach the bike set-up. This change to Star Yamaha will re-unite them with KYB's Gilmore and from what I understand, will give them a carte blanche to make changes as they seem fit. More testing, more changes, more say in the direction of the bike. In my eyes this could be good, could be bad—we'll have to see. I don't think the days of Tomac dominating will come back, age catches up to everyone, but I don't see why Eli can't do in 2022 what he did in 2021.

Kris Keefer: This is hard one for me to dissect. I am looking at the way Anderson rides the machine and to me his hang-off-the-back style fits the green bike extremely well. Will that translate into W's, that is another question. It's going to be a tall order to come off an injury, hop on a new bike and go out and kill it. I think he will podium a few times in SX but getting a win (to me) might be out of reach in 2022. The field is going to be so gnarly again next year, coupled with the fact that Anderson missed a lot of racing this year, I just don't see the old 2018 Anderson emerging in ‘22. If he makes it through the entire year healthy, gets some podiums, rides Pro Motocross well, we could see 2018 Anderson in 2023.

Jason Thomas: This move feels convenient for everyone involved. Monster Kawasaki was left with a hole in their lineup with the departure of Eli Tomac. Their long-term plan for 250 riders has not matured quite yet (Austin Forkner most notably). With Anderson being a former champ and also one of Rockstar Energy's marquee athletes, it presented an opportunity for Monster to snag him away from their competitor. Further, Anderson provides exposure to a much different demographic than Tomac. Anderson's free spirit approach and Team Fried fan base are likely appealing for Monster.

As for Anderson himself, this is a nice chance to reset. He can start fresh with a proven program. He has surely seen how well both Tomac and Adam Cianciarulo have performed on the Kawasaki. Even if the move is purely sideways, change for the sake of change can be a welcome reprieve. Riding feels less stale simply because the bike is a new challenge. Whether the results change is yet to be seen but the overall enthusiasm often goes up, which is sometimes enough to justify a move regardless of the outcome.

Steve Matthes: I was surprised to see Jason leave the only team he's ever ridden for, but that team isn't really the same anymore with the OG owner, Bobby Hewitt, selling to the Austrian group. Anderson's departure from the Baker’s Factory wasn't universally loved by the powers that be, I think Jason was probably frustrated by some of the things that changed on the team/bike, and losing Hewitt, and so here we are. He's delivered a 450SX title, so I'd say he did a great job for the team and the brand and it’s time for him to move over to Team Green. As for his performances, I think, much like ET, he'll be the same type of rider, as in he will get the same results that he did this year. I think Monster and that clan will love his personality and him and Adam Cianciarulo will mesh well. I don't know Jason that well but I don't buy the "he doesn't train" narrative that he loves to put out there. I also don't think he wants to be "all in" and live and die for this stuff and have the pressure to be "the guy," you know?

Are we looking at more news next week?