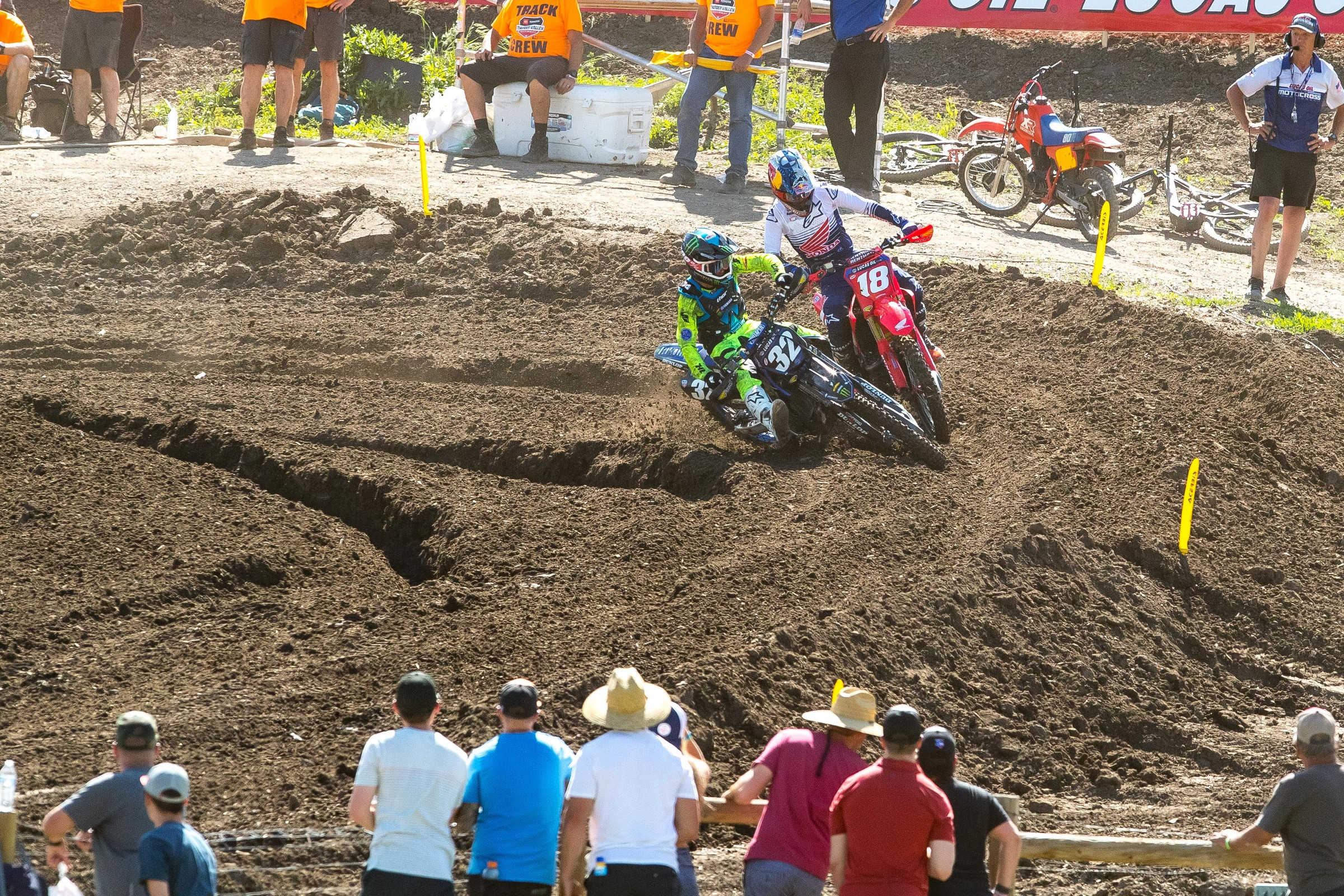 After holding the red plate for most of the season, Justin Cooper’s title hopes went from extremely healthy to dismal at best in just two rounds (Ironman and Fox Raceway 2). As a result, he trails Jett Lawrence by 23 points, almost an entire moto’s worth! There are, however, 50 points available this weekend at the Hangtown Motocross Classic, and Cooper needs to gain 28 on Lawrence, which means there’s still a chance Cooper could regain control.

The most obvious scenario is if Lawrence somehow DNF’s a moto. You know Honda HRC is going to make sure the bike is completely rock solid and mechanically sound, and it’s unlikely Lawrence is going to be abusing his machine with a title on the line. But there are things that are totally beyond control, like first-turn pileups or weird crashes. Earlier this very season Lawrence’s teammate, Ken Roczen, missed a moto at Spring Creek after a violent get-off in the first turn. And in 2010 Christophe Pourcel had the 250 National Championship all but in the bag until he crashed all by himself at the finale, hurt his shoulder, and couldn’t continue. Crazy things happen at the nationals!

It wouldn’t be ideal for Lawrence, but how exciting would it be if his bike gets mangled in a first-turn crash (and he of course escapes totally healthy) and Cooper goes out and takes second in the moto? That’d put Cooper a single point behind Lawrence heading into the final moto of the year, setting up an absolute do-or-die situation. Even then you’d have to favor Lawrence, however, as he’d be completely fresh while Cooper would still be recovering from racing the first moto. But you never know!

Another scenario is that Lawrence, in an attempt to avoid the above situation, holds back in the first turn in order to ward off catastrophe, only to find himself mired deep in the pack. Let’s call it 20th. Cooper, meanwhile, has used the explosive horsepower of his Yamaha to holeshot and completely disappear. A 7-8 on the day is still good enough for Lawrence to secure the title, and a rider with his talent and equipment should have no problem moving up through the field, provided nothing goes wrong. But as we know, weird things can happen when you’re in the pack. If Lawrence gets into another rider or finds himself in a weird situation in the pack, it could provide the window Cooper needs.

Everything in the above situation is totally possible. Will any of it happen? No. Lawrence only needs to score 27 points to bring this championship home for Honda, and that’s if Cooper is perfect, which he hasn’t been at the last few rounds. Even on Lawrence’s worst day this summer, which took place at Southwick, he still scored 32 points. That was the race in which Lawrence crashed hard after getting tangled up with Jalek Swoll in the air. In other words, Lawrence can survive a midair collision and still wrap this thing up. Or maybe he’ll eat a bunch of donuts on the gate, get sick in the moto, and have to pullover and purge. Either way, he’s still scorning at least 27 points.

What if Cooper doesn’t win? Well, if Cooper goes 2-2, Lawrence only needs to score 21 points, which he’ll likely do in the first moto alone. If Cooper goes 2-3, Lawrence only needs 19 points on the day. A third place is 20 points, and Lawrence has only finished worse than third in six of 22 motos this summer. And in case you’re wondering, in the last nine motos, second place has been his worst finish. He’s also swept the last four motos.

The bottom line here is, Lawrence is on a roll right now and has a very comfortable points cushion on Cooper. Short of being struck by lightning or getting abducted by aliens, there’s very, very little that will prevent the young Australian from becoming a national champion this Saturday at the Hangtown Motocross Classic.

Bottom line is that if Jett gains at least two points on Cooper in the first moto on Saturday, the title is his. If, one of the scenarios where Jett crashes and does not finish the first moto and it’s an all-out dual in the second moto, if they tie in points the winner will be crowned depending on who has the most moto wins, according to section 2.18 of the 2021 AMA Motocross rulebook. Entering the final round, Jett has eight moto wins to Cooper’s five moto wins, so even if Cooper won both motos at the finale Lawrence would still have one more moto win, giving him the nod as champion.

The 450 National Championship belongs to Dylan Ferrandis and the crew over at Monster Energy/Star Yamaha Racing, but there are still couple of things that could keep the 450 Class motos interesting. First, after wrapping up the title, there is zero pressure on Ferrandis. There isn’t any pressure on Eli Tomac either, who will be racing his Monster Energy Kawasaki for the last time this Saturday. How cool would it be if these two giants both get out of the gate well and slug it out for the win in both motos? It doesn’t matter that the championship is decided—both these dudes will go for the win, hard, if it’s available. It’d be even more exciting if Ken Roczen gets in the mix.

Speaking of Roczen, he’s still got something to race for. He only leads Tomac by nine points, and if he has another suffer-fest like he did last week at Fox Raceway (he gave up 12 points to Tomac there alone), it’s entirely possible he slides down a position in the standings. We’ll see how it all plays out when the gates start dropping this weekend.