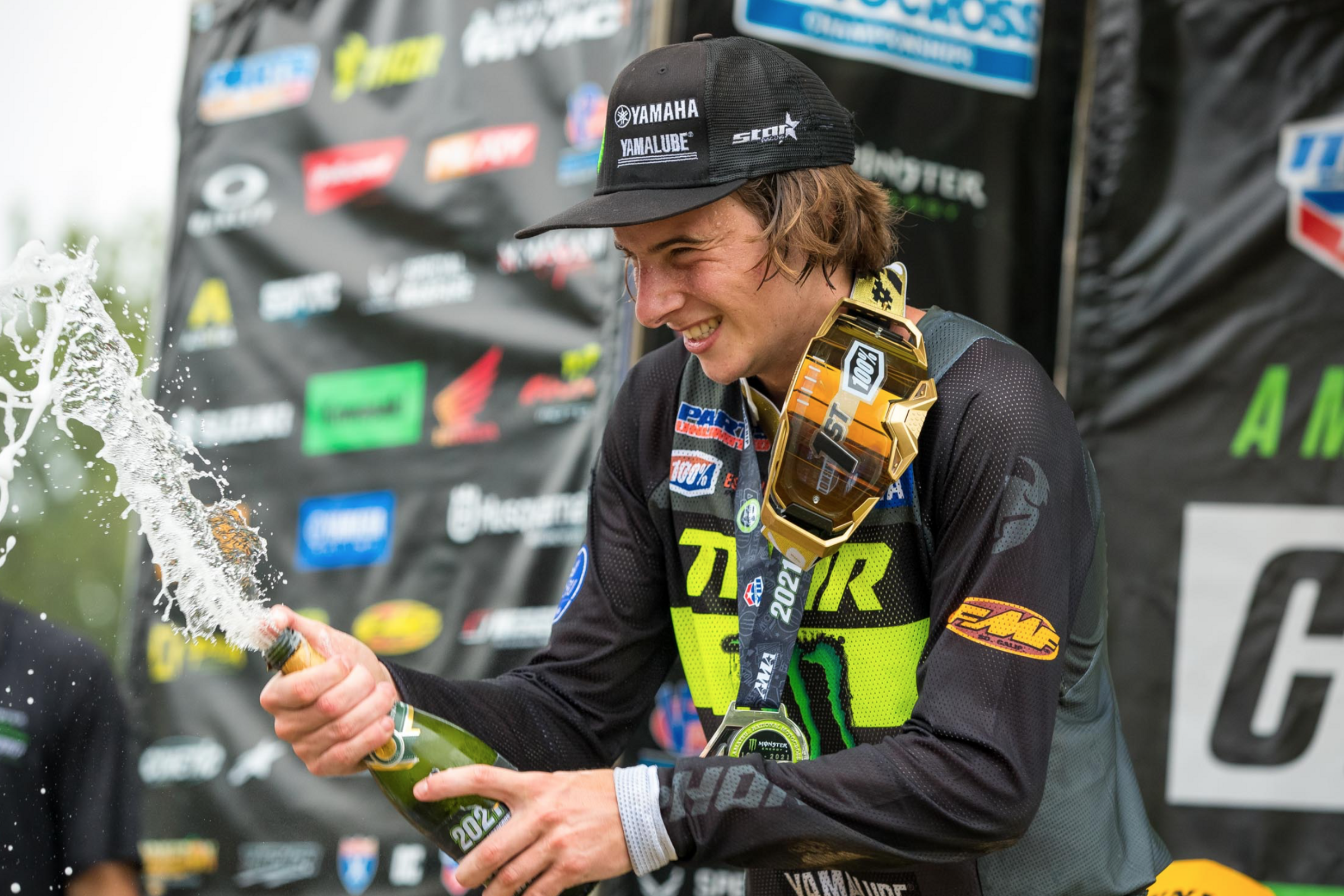 30 Stories From The Ranch 2021 Championship Wrap Up

What’s a week of amateur racing without some emotion, drama, heartbreak, and elation? The Monster Energy AMA Amateur National Motocross Championship at Loretta Lynn’s Ranch is all about the feels, in all directions, and the Friday through Saturday championship runs summed it all up. Here are some highlights.

250 Pro Sport Drama: Let’s start with the big names in the Pro Sport classes. With the 3-1 scores—thanks to the penalty in the first moto—Levi Kitchen needed a good ride here to secure the title. But he got passed early by Chance Hymas! Then he crashed! With that, Hymas (7-2-1) or Preston Kilroy (1-7) had a shot to win the title. Then Kitchen launched a furious charge, coming from outside the top ten to catch and pass Kilroy for second, more than enough to win the championship with 3-1-2 scores.

The Ultimate Showdown: The Kitchen/Hymas/Kilroy trio had an even bigger showdown waiting in Open Pro Sport, as all three were tied heading into the final moto. This created pressure, and it showed, as all three had a shot but only one survived. Hymas, despite being on a 250, nailed a good start against a field of mostly 450s and was set to get away with Kitchen, also on a 250, at mid-pack. But Hymas tipped over while leading. This put Kilroy (on a 450) into the top spot with a decent cushion back to Kitchen, but Kitchen got on the gas and started throwing down fast lap times to close the gap. Then Kilroy stalled it and Kitchen sailed past to get the lead—and poor Kilroy couldn’t get his Suzuki to kick back to life! With that, Kitchen had won both Pro Sport titles and the coveted AMA Nicky Hayden Amateur Horizon Award.

rommano’s Year: Hey Star Racing, leave something for someone else, okay? Not only is Monster Energy/Star Yamaha Racing leading the 450 and 250 classes of the Lucas Oil AMA Pro Motocross Championship, they have Kitchen on top in Pro Sport (which is what they call the A class at Loretta’s) and Nick Romano was named AMA Amateur Rider of the Year as the best B rider. Romano won 250 B pretty handily after distancing himself from early-week challenges from Gage Linville. A few hours after Romano claimed that crown, the B group lined up for the third moto of Schoolboy 2 (250F), and it was Romano’s title to lose. Well, even Star Racing isn’t perfect. Romano was a perfect five-for-five on moto wins until this point, but he crashed early, put on a furious comeback to get back into title position, only to crash again in the final minutes to let the title slip away. He went 1-1-8 for third overall. He was still the best of the B group, on balance.

Braswell’s Shocker: So who ended up digging out the Schoolboy 2 Title? KTM’s Caden Braswell, who thought crashes early in the week had ruined his chances. He went 5-2-1 to win the crown, and he was completely speechless on the podium, not even realizing Romano had crashed it away. That’s the kind of magic Loretta’s is known for.

The Noob: The world continues to tell the story of Jeremy McGrath winning a C class title at Loretta’s, and then going on to one of the greatest careers in the history of the sport. That was an outlier, though, because MC grew up racing BMX, and never even raced minicycles. The talent was there, but the dirt bike world had not seen it. Could there be a similar story from ’21? Keegan Rowley is a downhill mountain bike racer who is now dabbling with dirt bikes. He skipped some European downhill races this winner to focus on Loretta’s, and he scored the 125 C crown.

New Mini Champs: Thomas ‘Tiger’ Wood wins the Mini Sr 2 title, and in 85 (10-12) Limited Caden Dudney came through for the title, both in high-pressure third-moto showdowns. The real 85cc star, though, is Team Green’s Drew Adams, who scored the Mini Sr 1 (12-14) title against much older kids (Adams didn’t win a moto, but Landon Gordon went 1-11-1, which opened the door). Adams was also eligible for 85 (10-12) modified and he won that with a clean, three-moto sweep. Adams was one of Team Green’s highlights in a tough week for Kawasaki. He’s pretty big for a 12-year-old, so it will be interesting to see what class he races at the Ranch next year.

Heartbreaker in 40+: Unfortunately, it wouldn’t be Loretta’s without a crushing feat of bad luck in a final moto, and 40+ rider Jimmy Jarrett is this year’s victim. The former GNCC XC1 race winner finished second in the class last year to Racer X’s own Kris Keefer, and he was focused on victory this time, sitting on 1-1 scores heading into the final. Then his subframe collapsed in moto three! Edward Lee Walston was in position to steal the title, and he did.

The Drama: Husqvarna’s Evan Ferry and KTM’s Mark Fineis ended up having the most heated battle of the week in the 125cc classes (Schoolboy 1 and 125 B/C). In 125 B/C, they came into the final moto tied on points, and lined up on the gate next to each other. What happened next was open to interpretation. Ferry either blatantly cut over on Fineis and took him out, or Ferry was leaning on him and then hit a dirt clod, which make his bike accidentally kick sideways into Fineis. The answer to that depends what side you’re on. Either way, with Fineis down off the start, Ferry went on to win the title. Fineis put in an amazing charge from last to third, then tried to get second in the last corner before a collision with Bryce Shelly sent him flying into the fence. Fineis’ view was that he was “taken out off the start” and in the last turn, and riders were “trying to get in his head” on the line. He thought he broke his arm, but he checked out okay and returned for the final moto of Schoolboy 1, which he promptly won! Yes, lot’s going on in these classes. Ferry ended up with the Schoolboy 1 title also with 1-2-2 scores (Fineis was 1-19-1). These are Ferry’s first titles at Loretta’s. Expect the Ferry/Fineis battles to continue on 250Fs next year.

Third Moto Super Battle: Perhaps the best third-moto battle came in 25+, where Jacob Baumert, Robby Marshall, and Heath Harrison all had a shot at the title. They each led at times, Baumert at first, then Harrison got past Marshall and Baumert to put himself in the lead. Harrison backed it down on the last lap to take second, his 1-2-2 just edging Marshall’s 4-1-1 for the title. Harrison is a former pro privateer who is now a mechanic for Phoenix Racing Honda. Marshall is a New England rippa’ legend. These were two vets who know their way around a racetrack, and it was fun to see them battle.

the Best Class: The most fun class to watch was 45+, featuring an all-time cast of characters with Mike Brown, Jeff Emig (on a 150cc two-stroke Husqvarna), Ryan Hughes (on a 1986 Honda CR250), Keith “Southwick” Johnson, Kevin Walker, Barry Carsten, and more. Brown absolutely destroyed the field. Emig found his 150 to be great on the track but even worse off the start than he even expected, and as he explained, as a rider who usually holeshots, coming from last was not easy. Emig took second overall in a series of comebacks. Hughes was the star of the show on that ’86 Honda, which blew up multiple times during the week. He and his old mechanic Chad Watts kept wrenching on the thing, and Ryno pulled off a third in the final moto of the week. Also, shoutout to Keith Johnson, who now runs the Southwick National, for edging Emig for the 50+ title—Emig crashed on the final lap of moto two to hand over the moto win, and then Johnson beat him in a third-moto showdown. Emig said he was really nervous all week. Even the most experienced riders can’t avoid the nerves at Loretta’s!