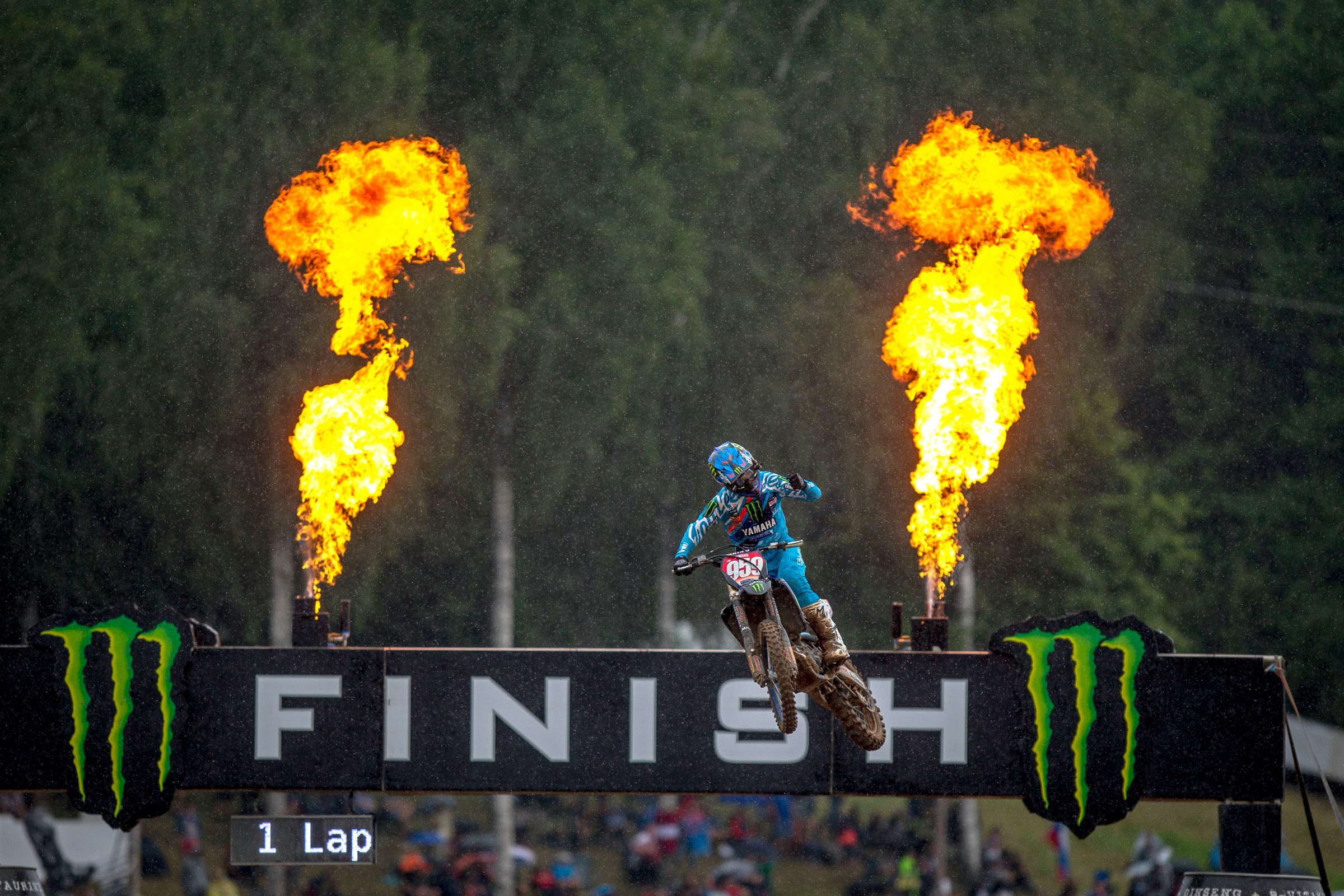 GP Report Notes on the MXGP of Latvia

If there is one team at the Monster Energy FIM Motocross of Nations that will not have an issue with rider selection then it is the country that ruled the competition between 2014-2018. Team France have an abundance of feisty and fast talent and options to choose from, and their 250 athletes alone could fill the roster. France could be crowning their fifth different world champion in the last 11 years in MXGP and the performance of Monster Energy Yamaha’s Maxime Renaux at the seventh round of the season was the most emphatic statement yet from this former Junior 125cc World Champion.

Renaux hunted and scalped Red Bull KTM Mattia Guadagnini on a day of rain and shine at Kegums and a brutal track that punished errors and sapped energy. In both motos the 21-year-old was untouchable and the 1-1 was not only the first clean sweep of his career and the second overall of the season on the works YZ250F but the full haul of 50 points helped deepen the shade of the red plate on the front of the bike with a margin of 34 over the Italian rookie in the standings.

Yamaha’s riches extend to another debutant (and another Frenchman) Thibault Benistant, the reigning EMX250 European Champion, who was fifth overall in his first GP turn at Kegums but the other podium spot was filled by the third rider on the team, Jago Geerts. That’s three blue bikes in the top five. Geerts, the Belgian, entered the season with a knee injury, and bagging only 33 points from the first four motos of the year would indicate that the 2020 runner-up would be struggling for billing as a title contender. Geerts has gained strength, however, as the affliction has slowly healed and four trophies from the last five Grands Prix means he has surged up the rankings and is now third, just 36 away from the burgeoning form of Renaux.

KTM has ruled MX2 with its 250 SX-Fs for a long time now, but Hans Corvers’ Kemea Yamaha MX2 set-up is firing on full burners. When it comes to the Austrian crew, Guadagnini again showed he deserves the mantle of ‘the next Cairoli’ (and ensures that Team Italy will have a tidy squad for Mantova in September with the #222 and perhaps Alessandro Lupino—eighth in Kegums—making the trio). He is KTM’s likely best hope in MX2, although reigning world champion Tom Vialle (yet another Frenchman) drilled his way to fourth overall despite two iffy starts and a lack of race fitness due to that fractured right hand. He still would face a massive uphill climb to repeat as MX2 World Champion.

For now, it’s Renaux time to shine. He finally attached starts to consistency and a ruthless approach. “I could make good passes and keep the pace up,” he said in near faultless English. “The track was so sketchy in some places with the hard edges, but I was quick to find my rhythm today. I couldn’t be happier.”

France has so much talent that could fill out an MXoN lineup—grouping Romain Febvre, Dylan Ferrandis, Marvin Musquin, Mathys Boisrame, and former world champion and RedBud team-winning member Jordi Tixier together gives France an envious batch. Which one of those riders would race? It’s not known yet, but with France having so many solid riders available, The Netherlands will have a job on their hands to grab the Chamberlain Cup two years in a row.

-Kegums was sketchy. The fast layout and the fine sand barely hide hard and unforgiving edges under the top layer. It means the bikes are constantly jacking-out sideways, and unexpected slick and flat areas sent riders to the floor. The likes of Monster Energy’s Romain Febvre—the winner in deeper, softer and kinder (!) sand in Belgium last Sunday—and Tony Cairoli were victims and, perhaps most demonstrating of all, Jeffrey Herlings. Febvre was fourth overall, Cairoli was fifth but Herlings’ last lap mistake in the second moto, while holding second behind Jorge Prado, cost the Dutchman overall victory and dumped him to third on the box. Herlings had claimed the first race in style ahead of world champion Tim Gajser but played a safe game in the second behind Prado and in heavy rainfall. Herlings is still nursing a fractured left shoulder blade that is not yet fully healed and his fatigue was noticeable. The slip was nevertheless surprising and his face of thunder on the podium (not before he’d sportingly congratulated Gajser on a 2-2) was quite a picture. Kegums rewarded commitment, confidence, and flow. Those that found a rhythm were able to profit but the relentlessness of the demands was scary and exhausting, even to watch. The riders tend to be slightly surprised at the challenge Kegums presents each year but there are few circuits quite like it on the GP trail.

-Jorge Prado has pushed up to be KTM’s top rider in the MXGP standings with third position and is just two points behind Febvre and three in front of former mentor Cairoli. With Cairoli, Prado he swapped some close and unusually aggressive moves in the first sprint. The Spaniard has won just two motos this season but has picked up five top-three results in the last seven starts. The level of consistency has increased but the rate of victory in his second term on the 450 is a long way from his MX2 level of supremacy in 2019. Part of the reason—aside from the rich competitiveness in the MXGP class—is the lingering effects of COVID-19 that he contracted towards the end of 2020 and which caused him to miss the final five races in less than two weeks last Autumn. Prado has not talked in-depth about his physical shape despite admitting that COVID-19 could been a factor to prominent British website www.mxvice.com but has said that it has been the biggest barrier to his progress so far.

“The physical side has been my weakest point, but the laps were so long at the end of the moto!” he admitted of his second checkered flag in 2021. Cancellation of the Finnish Grand Prix means a breather in the calendar now and from which Prado could work to eye his Kawasaki and Honda rivals. “It’s good and I’ve not been so close to the leader,” he said of his standing in third. “We have some tracks now that I like a lot.”

-Romain Febvre has seized two podium results in the previous three Grand Prix but could not extend the tally in Latvia. He was seven points away from Herlings and his crash while leading the second moto after two laps was another expensive slip by the Frenchman, who must rank as one of the fastest riders in MXGP but has made too many mistakes to capitalize. Is distraction a factor? Febvre is currently the most sought-after rider in the series thanks to the dissolution of Kawasaki’s agreement with the present KRT set-up and an alleged contract offer by the IceOne crew who are expected to run the KX450Fs in 2022.

-Dane and factory Rockstar Energy IceOne Husqvarna rider Thomas Kjer Olsen won twice in the MX2 class at Kegums in what was an impressive four-season stint in the category with three top-three championship finishes. ‘TKO’ is a rookie in MXGP in 2021 and, like former MX2 race-winning rival Monster Energy Yamaha’s Ben Watson, is finding life an adventure in the premier division. Olsen was frequently regarded as too tall for the 250 but has yet to find his mojo on the bigger bike. The Latvian round summed up his season to-date: a mistake and another rider landing on his motorcycle causing a DNF in the first moto while he found top ten speed to record eighth in the second race. He has notched just four top ten classifications so far, which could be considered underwhelming after his record in MX2, but the sparks of speed are there and Olsen needs to address a weakness with race starts to really put himself into high contention. In contrast, Watson has been more adept with the starts on his Yamaha in 2021.

-Holland’s Brian Bogers took the factory GasGas to sixth overall for one of his best results in MXGP. The Dutchman was surprisingly ahead of teammate and Latvian star Pauls Jonass, who had finished on the podium at Lommel the previous Sunday. Bogers—KTM and WP’s designated test rider—went 6-9 while Jonass suffered a small spate of crashes and couldn’t find a flow in front of an expectant if somewhat damp partisan crowd. “I was expecting more of the same at my home GP but it just wasn’t to be,” said Jonass.

-Red Bull KTM’s Tom Vialle was one of the more bustling riders in MX2. The world champion’s 14th place in timed practice was a limitation for the starts and Vialle had to gun the 250 SX-F to make the top four. After slicing a knife through the MX2 field with a dominant 1-1 at the opening round in Russia, Vialle then missed three rounds with his hand injury. The Frenchman is more experienced and visibly more muscular and fit for his third GP year in 2021 and is now gaining ground, points and speed. Holding eleventh in the standings and 138 points adrift of Renaux he remained dubious concerning his title defense, however. “It’s looking difficult,” he admitted. “I’m far behind in the points and Jago and Renaux are riding really well at the moment. I just want to come back and win as much as possible.”

-The hot hard-pack of Afyon will stage two Grands Prix in Turkey in the first week of September as MXGP morphs to try and log more events in the wake of changing border restrictions in Europe. The long trip to Latvia was already too much for some MX2 teams after a full month of travel to Holland, Belgium and the Czech Republic and the change of date for the Kegums event also caused a clash; Hitachi KTM fuelled by Milwaukee were just one squad with commitments to the ACU British Championship where Conrad Mewse is firmly in pursuit of the MX2 title. It is already looking unlikely that the championship will end the year with trips to Argentina, Indonesia, and Bali so more alterations are undoubtedly on the horizon.