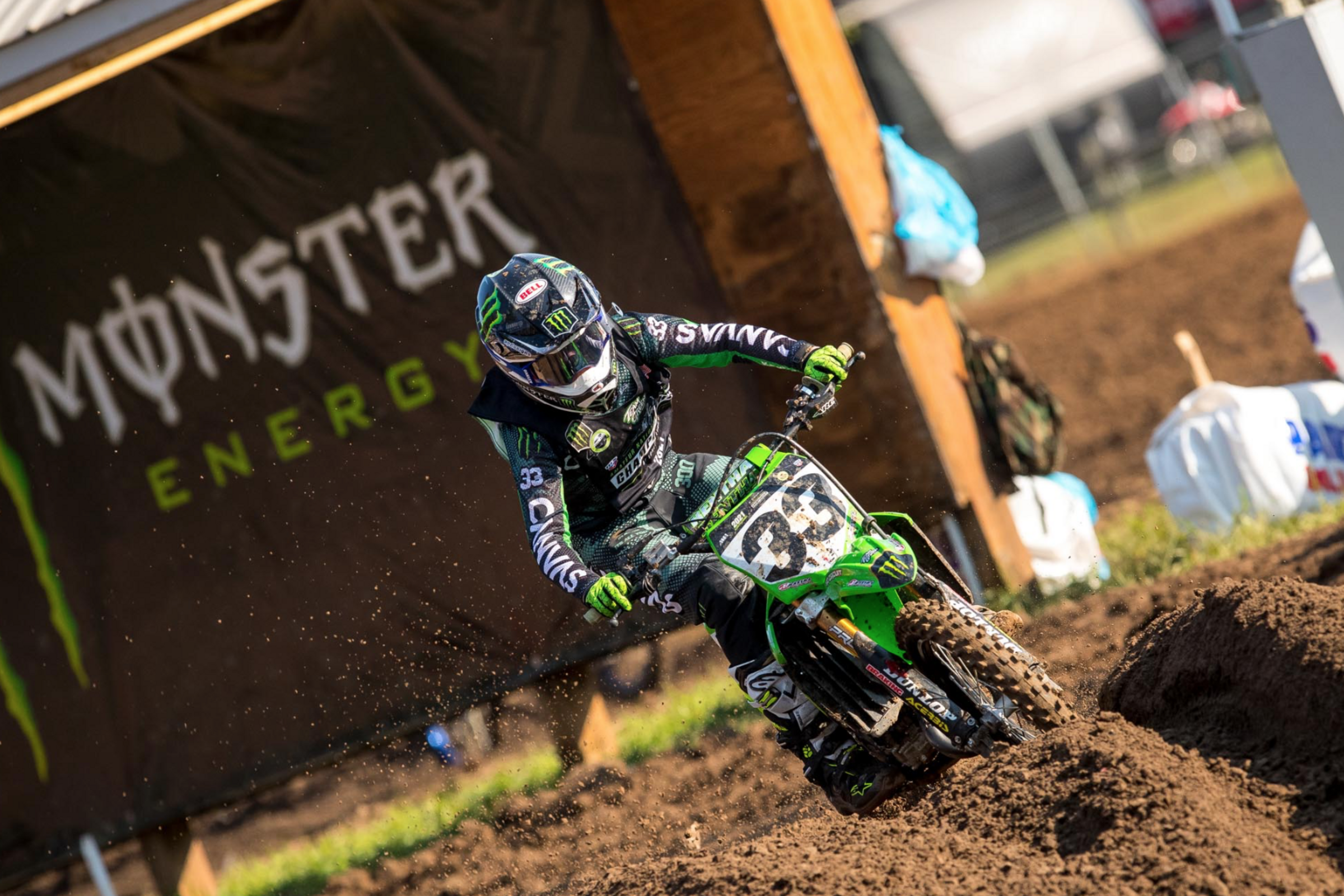 The third day of racing for the 40th annual Monster Energy AMA Amateur National Motocross Championship at Loretta Lynn’s Ranch is in the books. Here are some key takeaways from Wednesday.

Johnson and Emig Split Masters (50+) Wins: After Jeff Emig took the race win in the first Masters (50+) moto, he appeared to be on the way to his second moto win as well on Thursday. Until he tipped over in a turn on the last lap! Then, Keith Johnson, running in second, ran his front wheel into the space between Emig’s rear fender and rear wheel found himself momentarily stuck. Johnson managed to wiggle his front wheel free and took off as Emig was picking up his Husqvarna. Johnson went on to take the race win, tying him with Emig heading into the third and final moto set for Friday afternoon.

Ferry vs Fineis: Mark Fineis (KTM) and Evan Ferry (Husqvarna) have now traded race wins in the 125cc (12-17) B/C class. Fineis took the moto one win after Ferry fell on the last lap. But in the second moto, Ferry got redemption. Logan Best grabbed the holeshot ahead of Bryce Shelly. Fineis sat fourth as Ferry was sixth early on. Ferry made a couple of fast passes as he quickly made his way up to the lead group. Then at one point, Best, Shelly, Ferry, and Fineis were running four wide in the turn together after the Ten Commandments! Ferry made his way into the race lead, where he would eventually finish. The Rockstar Energy Husqvarna rider sent a huge whip followed by a one-footer on the final lap as he cruised to the checkered flag. Fineis would come home second as Shelly, Best, and Collin Allen battled for the third through fifth positions. Shelly made a mistake that let Best get around him again but eventually he came through in third ahead of Allen (fourth) and Best (fifth). This sets up a good battle between Fineis and Ferry heading into the finale in a winner takes all battle. In the Schoolboy 1 (12-17) B/C class, Ferry took the first moto win as Fineis finished 19th, but in today’s second moto, Fineis grabbed the race win ahead of Ferry. Ferry, with his 1-2 finishes, sits in the driver’s seat of that class ahead of Ivan Aldama Jr. (3-4 finishes) and Crockett Myers (4-5 finishes).

Romano Stays Perfect: Nick Romano had two moto wins—250 B and Schoolboy 2 (12-17) B/C—entering the day, but his wins didn’t come with ease due to pressure being applied by Gage Linville. The two met up again for the second 250 B moto of the week Thursday, and they picked up where they left off in the last moto, 1-2 off the start as Romano grabbed the holeshot over Linville. They traded faster laps, as Linville would close the gap then Romano would open it back up again literally all moto long. Behind them, Talon Hawkins made his way into third, but he would get bumped back by Gavin Towers and Preston Boespflug. Romano was flawless this moto as he started to gap Linville by the end of the race—that was until the last turn of the last lap. Romano made a mistake and missed a rut, which almost tossed him from his Yamaha. He stayed up and it took a second to get his bike started again but luckily his gap over Linville gave him enough time to get started and get to the finish line first. Afterwards, he had some boastful words for Linville stating he “broke second place.” If Linville, standing right there about to do his own podium speech, caught what Romano said, it could fuel a fire in him heading into the final moto. Romano’s 1-1 sits first place in the standings for the overall ahead of Linville’s 2-2, Towers 3-3, and Boespflug’s 4-5. Will Romano keep his undefeated streak going throughout the rest of the week?

The Marshall is In Town: The Junior (25+) class has come down to 49-year-old Mike Brown against some much younger riders. Brown’s starts and early laps have been on point but the “kids” have been pushing him hard. In moto two, Brown took the holeshot but  Robby Marshall snuck to the lead. Heath Harrison (who won moto one) leaned over too far on a turn and caught his break lever on the pile of dirt on the inside of the turn and dropped several positions, coming through sixth after lap one. Harrison got going again and eventually caught up to Brown. Just like Harrison did, Brown caught his lever on the inside of the billboard turn and tipped over. Harrison and Jake Baumert got by as Brown remounted in fourth. By the final lap, Brown got caught and passed by Jamal Porter Jr, as the Husqvarna rider came through fifth. Harrison came through second, giving him 1-2 finishes heading into the Friday evening finale, with Marshall sitting on 4-1 scores.

Phelps Takes Over the Women Class: Taylor Allred claimed the moto one win in the Women class, but moto two belonged to Sophia Phelps. GNCC racer Korie Steede grabbed the holeshot but was passed several turns in by Katie Benson. Allred positioned herself right behind Benson and the two would battle for the lead. Then Phelps began to charge. She got around Benson to take over second and then she went at Allred for the lead! Phelps was putting in 2:11-2:12 lap times compared to approximate 2:14 lap times from Allred. After a couple of laps, Phelps got into the lead and then Benson put in a late charge of her own to get around Allred for second. With her win, Phelps has 2-1 moto finishes over Allred’s 1-3 and Bensons’ 4-2. The third and final moto will take place on Saturday morning so the anticipation for the overall championship will build until then. And a note in the Girls (11-16) division, Kyleigh Stallings sits with 1-1 moto finishes as she finished with gaps of 12 seconds and 13 seconds, respectively, back to second place.

Deegan Goes 1-1 in Supermini 1: After a wild race in the first Supermini 2 (13-16) class on Wednesday where he finished 39th officially after colliding in air with Krystian Janik, Haiden Deegan came back out and dominated the second Supermini 1 (12-15). Janik got the holeshot and early lead but Deegan went from about fourth-fifth in turn one to the race lead about halfway through the first lap. Enzo Timmerman ran into bike issues and he did not finish the moto. While Deegan is out of contention for the title in the Supermini 2 (13-16) class, he sits a perfect two-for-two in Supermini 1 (12-15).

Jayden Clough Rebounds for Race Win: In the first 450 B Limited moto, Jayden Clough recorded a DNF. In today’s second moto, several riders went down in the first turn as bikes and riders went flipping into the dirt. Then four more riders caused a clog up on lap one after the Ten Commandments. Kimble Jett was leading early but started to feel pressure from Larry Reyes Jr. and Clough. Reyes got around Jett to take over the lead but Clough kept charging on his Kawasaki KX450 and grabbed the top spot. Reyes retook the lead in the Ten Commandments, but Clough pounced back on an opportunity to take the top position, where he would finish. Although Clough is out of the title contention, he made it interesting for Reyes and Julien Beaumer (first in moto one and third in moto two) as the latter two are tied for the overall heading into moto three. Clough—amongst others—could play spoiler in the final moto to shake up the championship.

Adams Remains Perfect in 85cc (10-12): After a tough week at the Ranch in 2020, Kawasaki Team Green’s Drew Adams has come in ready to go this year—and his results are showing. After winning the first 85cc (10-12) moto, he put on a crazy quick charge from eighth off the start to getting up to and then around leader Deacon Denno to take the lead in the second moto. Adams was untouchable as Denno held on for second. Canyon Richards, a title contender heading into the week, finished ninth in moto one but did not lineup for moto two. In the older Mini Sr 1 (12-14) class, Adams holds 3-2 scores, enough to lead that class heading into the finale ahead of Jeremy Fappani (4-3) and Luke Fauser (2-6).

Open Pro Sport Overall Is...Still Open: In the first Open Pro Sport moto, Levi Kitchen won the race but was officially credited third due to jumping on a red cross, bumping Preston Kilroy and Chance Hymas from second and third to first and second, respectively. He really needed to win the second moto to help his title chances, but starting about 35th place didn’t help his cause. No matter for Kitchen, he just turned up the heat and launched an amazing come-from-behind charge. Jace Kessler came through turn one ahead of Kilroy, Harrison, and Justin Cokinos as Kitchen came through about 29th. With Kilroy in the lead and Kitchen and Hymas way back, things were looking good for the Suzuki rider…until he caught his break lever and went down on lap one. Meanwhile, Kitchen and Hymas (riding 250s against a field of mostly 450s) were moving forward. Kitchen soon charged to inside the top 20. Then he made his way into the top 15...then the top ten. By the end of the first lap, he was eighth, just behind Hymas. Hymas had to put in a charge of his own, as he started outside of 15th. Out front, Brandon Walther took the lead from Kessler, who was shuffled back as the top five tightened up together. They were all in the turn after the Ten Commandments jockeying for the lead!

The charging Hymas found his way to the lead as he quaded out of the Ten Commandments. The Kawasaki rider started to click off a few laps in P1 but Kitchen got to third and then around Kilroy into second by the end of the fifth lap, when he dropped a 1:52.365—what I believe is the fastest lap of the races at the Ranch this week through the end of Thursday—and went for Hymas. Kitchen got close to Hymas and then pulled the trigger on a pass in the last turn of lap eight to take the lead, cutting hard to the inside before blasting out of the turn in the lead. He went on to win the race by 11 seconds over Hymas, which now makes the title fight interesting as he, Kilroy (1-3), and Hymas (2-2) are all three tied for the overall heading into Saturday’s finale. This one could get interesting in a winners-take-all situation, where others could play spoiler as well. Jett Reynolds, thought to be a contender coming in to the week, went down and suffered a collarbone injury during a rough second moto