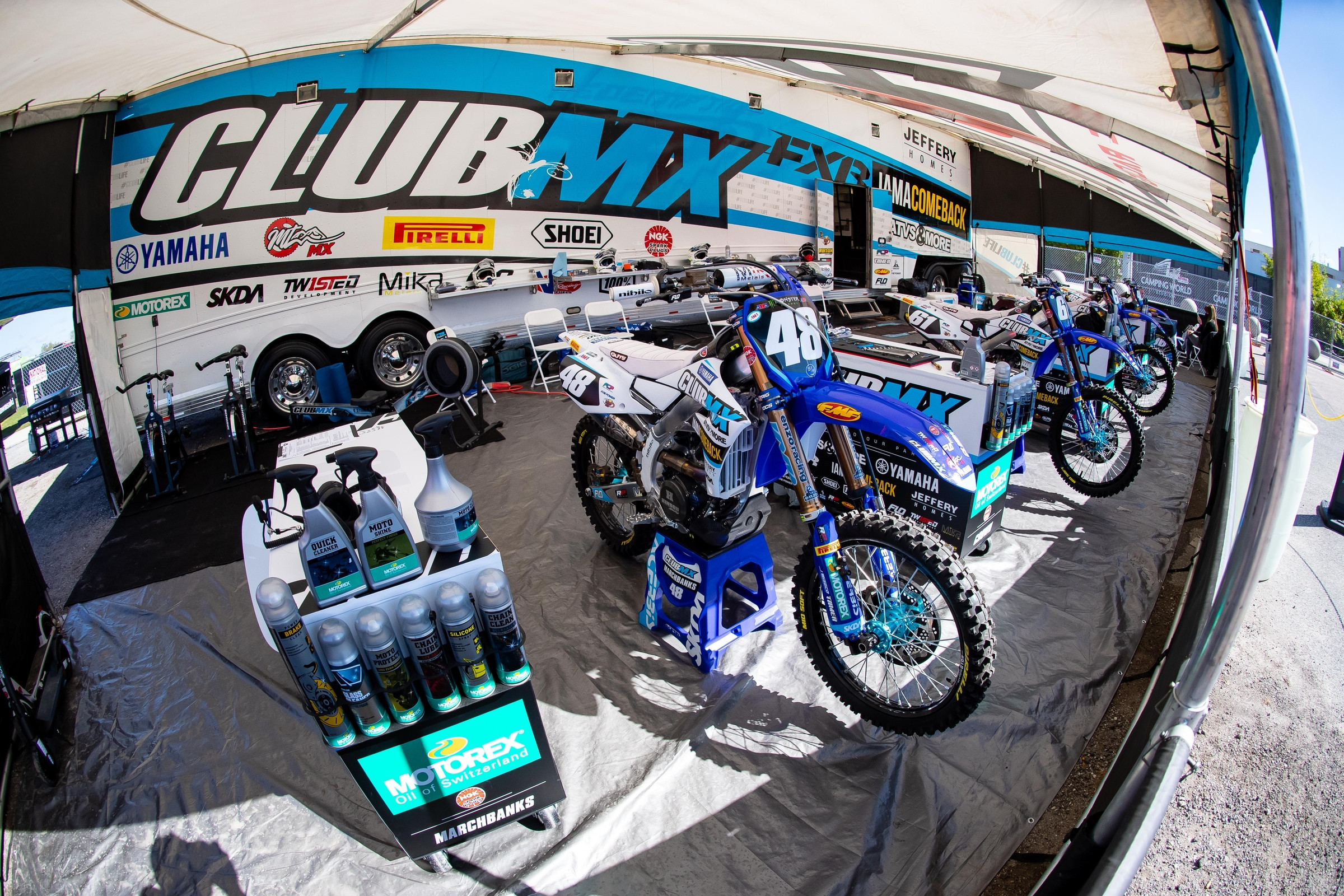 Privateer Weege And Matthes On The Privateer Teams, Part 2

Welcome to part two of the privateer team sweepstakes! The privateer ranks present competition of a different sort. These guys aren’t battling for race wins and titles like Ken Roczen and Cooper Webb, but they have their own goals. The riders want to make mains, make money, and get noticed…perhaps by a factory team. Then, the teams themselves would also like to get noticed by the factories. They would welcome more support, and since other former privateer units have graduated to factory status, such an upgrade is not impossible.

Our Steve Matthes and Jason Weigandt will spend the next few weeks running down what they’ve seen from some of the privateer teams in Monster Energy AMA Supercross. This is Part 2 of our look, with one more to go next week. If you missed our first part, make sure to check it out.

Matthes: This team has been consistent the last few years with Brown and Castelo and they’ve been on Husqvarnas. Brown has been one of those dudes just outside the factory guys the last couple of years but this year and in the past, he’s been hit with injuries. Still though, if we had a half-time race on TTR’s, my money is on Brown to beat everyone. Castelo’s from Ecuador like Martin Davalos and is a solid rider, it’s funny how many times (not this year of course because, yeah Castelo got hurt right away) Brown and Castelo are around each other. Bonus points to Castelo for telling me on a podcast how he just went for it and asked a waitress at a local sushi place out one day and they’re now engaged! Shoot your shot fellas, you never know!

Weege: I dig that this team is based out of the Pacific Northwest and often backs a rider from that area, such as the very popular Carson Brown. Brown has talent but more than that, he has fans! I’m not sure if it’s his amazeballs minibike skills or the hardcore loyalty of the Pacific Northwestern folks, but social media loves some Carson Brown. He get can get results, too, it’s unfortunate he went down with an elbow injury at round one (also unfortunate for my fantasy team). Castelo, I feel, had really raised his game lately but went down also this year, sounds pretty painful. Alves is the fill-in but then he got banged up, too. I’ve watched Ramy at Loretta’s and the Racer X Maine Event and the dude rips. Just another example of how good the top-level guys are—if Ramy should up to your local track you’d be convinced he’s the fastest rider in the world. But he’s a borderline main event guy. Never forget that when you watch supercross on TV that’s a very, very high level.

Weege: Clearly this team is on the verge of something big. After a few years with different mergers and tie-ups, ClubMX went on its own last year and the results really shot up, Crown, Josh Hill, and Enzo Lopes were really good. Now they’ve added Marchbanks which is a huge step, and the team has a podium. Marchbanks says he’s not at a disadvantage compared to a factory team here. If the bikes are that good, with Marchbanks’ talent, they could win.

Crown is a good dude but it seems like every time he’s making a breakthrough, he gets hurt. He told me today that he was battling Pierce Brown in his Daytona heat race, but then Joey ended up getting knocked out while Brown went on to take a podium in the main event. Joey should be back for Atlanta. Owen has always had the flashes of speed and talent so I’m curious what his ceiling is if he puts together the whole 15 minutes. Thury, I thought, was just a nice guy from Germany living the American supercross dream but now he’s starting to get results. That’s a nice bonus. Augustin is a kid just moving up, he hasn’t made a main yet, and this is an example of ClubMX providing a spot for the amateur kids that train there.

If this team keeps progressing, they’ll end up having public tracks, a training facility for amateurs and pros and a really good team all in one spot. I really can’t think of anyone pulling that off before.

Matthes: I mean, they have Phil now so let’s hope his cheerfulness and black cloud doesn’t bring the team down, yeah? Marchbanks is very talented and just a tick behind the dudes on the box which, for a privateer team, is a good sign. I know teams like this bristle at that kind of talk but the reality is that they just don’t have the budget a factory team does to get works transmissions or change the parts out to optimize performance. Anyways, yeah Marchbanks is very good and that’s all a big step for this team. Crown has serious skills and man it sucked to see him get hurt the last two years when, as you said, he was just starting to break through. I’ve always been an Owen fan since the Crosby Honda days when he showed potential. Him and Josh Osby are, to me anyways, kind of the same dudes. I’m still mad at Thury for his Orlando 2 debut (PulpMX fantasy reasons) so I’m not ready to embrace his improvement just yet.

Matthes: These guys are based out of Arizona and although they’re now Motul GasGas, I liked them better when they were Gas Monkey Husky because Gas Monkey is a cool title sponsor name. I wanted the top rider on the team to get an actual monkey skull each week but alas, things are different in 2021. “Zombie” Chris Blose has ridden for these guys for what seems like four different times? Derek Kelly started out in SX not being very good but he just made his first main so that’s cool and he’s very good outdoors although this team doesn’t do outdoors. Falk got hurt before the year so the team drafted French veteran Cedric Soubeyras a few rounds ago.

Weege: Yeah the Gas Monkey Energy sponsorship really made this team look “next level” but I guess that has gone away. We could have had the Gas Money GasGas team! Zombie Blose is the Chizz of the 250 class, he will just grind out good results until he’s 40. I love guys that just know what they’re doing. I feel really, really bad for Falk. He’s in that ever-growing category of “factory deal out of amateurs then dumped” and I wanted to see what he could do with a fresh start. Alas, he got hurt and that’s sad. I didn’t even realize Soubs jumped onto this team. I feel like Soubs hasn’t been as good as he usually is this year but he’s a “knows what he’s doing” guy like Blose so I’m sure he’ll get it dialed in.

Kyle Peters, Enzo Lopes, and Mason Gonzales (out for season with broken leg)

Weege: This team looks the business. The bikes and truck scream “factory Honda” and in some circles, they are. Phoenix runs Honda’s factory Grand National Cross Country (GNCC) program, and they’re also super successful in ATV MX, and of course Kicker AMA Arenacross with Peters. They hired former JGR guys Dean Baker and Mitchell Key for the engine department, and former JGR suspension man Jonny Oler handles the suspension. A lot of pieces in place so it seems like this squad is gonna break out the check book, sign some big-name rider and go for supercross wins. When GEICO Honda shut I know a lot of Honda teams were looking at a chance to get more factory support, so I thought maybe Phoenix was about to…rise like a Phoenix. Not yet. For now, they remain a solid team with some support but not a full-on factory-level team.

Matthes:  I’d like to see these guys on quads also Weege. But seriously, a small team that seems to be on the build up here, it’s cool to see. Peters is gonna Peters. If we have a race between Peters, Chiz, and Blose, what happens? Who gives in first? Does the earth change rotation? The mind boggles thinking of a race like that. Lopes needs some luck here, I’m a fan of the kid though. Osby is a solid veteran and seems to be a bit better on the Honda, right? And Mason “Speedy” Gonzales, we need to see again but he was a real surprise last year (AHEM WEEGE).

Matthes: Poor Michael Lindsay! He went from media guy to team owner for some reason and quickly endured the most stressful year of his life. This is the second year for his squad. Schock has been maybe the most improved rider in SX (wait, that’s Cade Clason on line four) and he’s been better than Mumford which none of us thought would be the case. Mumford is a good kid, he got a bit of a raw deal with the GEICO thing going away and hasn’t been on it in SX as “we” all thought. Still, he’s a personable, funny kid, and you’ve got to pull for him.

Weege: I almost wish Schock’s name wasn’t Schock because it seems like we’re just making a joke when we say he’s the shock of the season. I really mean it! Schock is the shock of the season! I can’t believe how much better this guy is in supercross this year. It’s gone from “oh man, poor guy” to “oh man, this guy could really go places.” In one year. Did I hear he actually has a college degree? What? This is like Justin Cooper on steroids.

I was expecting big things from Mumford, as we all were, but it sounds like he had a big crash right before Orlando and it’s been a struggle putting the pieces together. I learned this all from this dumb Privateer Island Life Podcast you did with Lindsay. Anyway, hopefully no one is judging Mumfy on these early SX races. All of these kids need time before you can really make a judgement, and far too many get cut off too soon. We won’t really know how good he is in supercross until next year or even 2023. Let’s keep this going, okay?