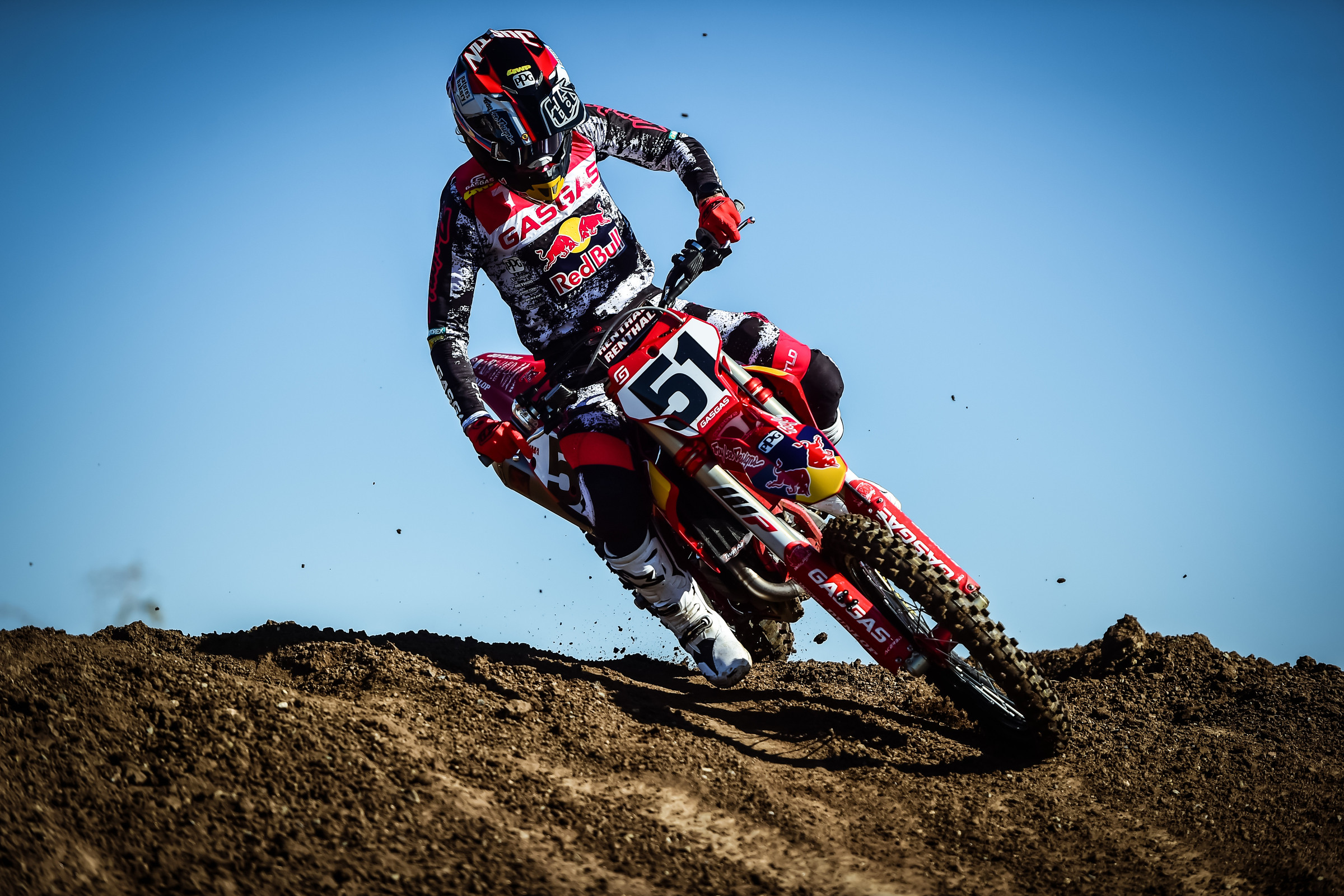 Now that we are about a month removed from the final round of the Lucas Oil AMA Pro Motocross Championship, we are seeing more and more pieces of the silly season puzzle being put into place each week. For this week’s 3 on 3, we asked former pro racers Jason Thomas and “Dbo” Denny Stephenson and former mechanic (and current janky media guy) Steve Matthes, about some of these roster moves. Read the trio’s thoughts on the following roster moves: Justin Barcia to Troy Lee Designs/Red Bull/GasGas, Malcolm Stewart to Monster Energy/Star Racing Yamaha, and Shane McElrath to the SmarTop/Bull Frog Spas/MotoConcepts Honda.

1. What do you think of the Barcia move to TLD GasGas?

Jason Thomas: It makes sense on a few levels. From what I understand, Barcia has wanted on that KTM/Husky/GasGas platform for a while. He has been searching bike-wise for a few years, from Honda to Suzuki to Yamaha. Whatever he's looking for, maybe this will be the answer.

On the GasGas side, they are adding a race winning capable rider right out of the blocks. Those don't grow on trees, so I like the choice. He is seasoned and no-nonsense in his approach so the learning curve should be easy. It seems like a nice plug and play where everyone feels good about the partnership... at least before the season starts. Let's circle back to this halfway through the season and see how everyone is feeling.

Denny Stephenson: I think it’s great. I had read some stuff that said that Roger De Coster was trying to push for Joey Savatgy, but then I heard how bad Troy (Lee) and those guys wanted to get Justin. Justin is just a guy who brings a lot of color to a situation. He’s a big name. He’s aggressive and popular. Why not bring a guy that’s full of color and flair to a team known for color and flair? I watched the video they did and it’s good to hear he can over rev a GasGas just like he can over rev a Honda and a Yamaha. We all know he can win at any moment. I don’t think it will be quite the change in results like Cooper Webb had when he went from Yamaha to KTM—Barcia is going from Yamaha to a red KTM—but it’s cool. He gets some new life with a new team and new brand. Anytime something like that happens it’s good, but especially in a time like this.

Steve Matthes: Going to be strange to not see Bam Bam in A-Stars gear and Arai helmets, that's for sure. I like this move for Justin but at the same time I (like Denny) don't think this is going to go "Cooper Webb" and he'll win the SX title in 2021 once he moves on from Yamaha. The SLC SX mini-series went poorly for Justin for sure but before that, he was very, very good. So the Yamaha did work for him somewhat ergo I don't want to hear about "the Blu Cru sucks and he'll be great on a real bike"...go look at his Yamaha results—they're very good and most riders in the pits would take that. To me he will be the same on red as on blue where he's going to podium a bunch, have those nights where he's great and some nights we'll wonder if he's out there. Maybe when the track conditions change the team will be able to have the bike working better for him and the machine won't be off the mark like it seemed to be on Yamaha so that's one positive. Listen, I rode his basic set-up couple weeks ago and it was really good for this +45 B rider so not sure why he just couldn't win every single race.

2. What do you think of the Mookie move to Star Racing?

JT: When we factor in the fine print, I think this deal made the most sense. Mookie is part owner of Seven and the brand was built around his hall of famer older brother, James. I just couldn't envision a scenario where he didn't wear that gear so that limits his landing spots. GasGas was out with their ties to Troy Lee Designs, Rocky Mountain ATV/MC-KTM-WPS wears Fly Racing, SmarTop/Bullfrog Spas/MotoConcepts Honda wears Leatt, and on and on. Going full factory was really the only option to avoid team issues but that's a big ask, too. There are only so many of those chairs when the music stops. I think given the circumstances and Mookie's loyalties; this was the perfect landing spot.

Denny Stephenson: I have a different opinion on this one. Obviously, Malcolm has a ton of talent. I thought he had found a great home on the Honda with MCR. He looked great there. It kind of reminds me of some of the moves James [Stewart] made later in his career. Should he have gone to some of the places and teams that he went to, or did he leave because he was frustrated? Maybe it was to make more money? There was a time with Malcolm where no one seemed to know where he was going to go, we just knew he wasn’t going to go back to MotoConcepts, which was a team where he had proven to be successful, and he had turned the corner with. Now he’s going to another team. I don’t know if this is a sideways move or what. The 450 Yamaha isn’t a proven bike yet, for a lot of guys. The sport is better when a Stewart is racing, so I wish him the best of luck, and Star has had a ton of luck with the 250 class, so we’ll see what they can do with the 450. Hopefully, Malcolm can have the same success he had last year, because he sure is fun to watch and brings a lot of flair to the sport. I don’t know if he can stay as a top five guy, if he can turn the corner and make the podium, or if he’s just gonna be an eight to 12 guy.

Matthes: I'm very puzzled by Mookie's career moves over the years. Missing Anaheim 1 twice, fill-in rides, no motocross, privateer teams, etc., etc. so when he finds a spot at MCR and absolutely crushes it, I cannot fathom why he wanted off of the team ASAP. Obviously, I don't know what all the stuff behind the scenes but it's weird, right? So, having said that, this is THE best spot for Malcolm to land. The bike is a factory machine that hopefully Star can improve on when the conditions get hard packed and slippery, he'll be with some great teammates that can push him and let's go. I'm not sure if I see him taking a step up from what he did in 2020 but I could see him staying the same for sure.

3. What do you think of McElrath to MCR?

JT: This one caught me by surprise. I thought McElrath was a shoe-in to land on a Suzuki. With both JGR and HEP chumming the water, it just looked inevitable. With JGR's future looking uncertain, this move now makes a bit more sense. MCR has a great bike to work with and Mike Genova has never been shy about deploying resources when he believes in something. That MCR team has a solid lineup and a proven 2020 model (Friese will be the only rider on the 2021 Honda CRF450R) to make subtle improvements on. That will cut down the testing time for McElrath as they will know the right testing direction much more quickly, as well as having several options to try. Much like the other two signings, this one just feels like it's the right move for all involved.

Denny Stephenson: I like Tony Alessi a lot. I worked closely with the family when I worked for Smith. He shows a lot of passion, a lot of knowledge, but also a lot of patience. I think McElrath will be, and I’ve talked about this with a lot of people on text threads about this, maybe he’s a third to fifth place guy, but some think he’s fifth to eighth, some think it’s eighth to 12th. I think he’s a good rider, he’s smart, but I feel like when his back is against the wall, he seems to kinda fold under pressure. So, I hope the team doesn’t put him under a lot of pressure. Honda has proven bikes, I guess he’s riding a 2020 and I know they have tons of information over there. I actually think McElrath beats Mookie in the final standings. I love rookies, I love when they come in with a ton of passion. Then that 450 throws them on the ground a few times! I hope Shane can stay safe, but I hope he brings some of that passion that makes rookies so fun to watch.

Matthes: I'd like to see Shane land with a team that did motocross for sure. I know the MCR PR said they will go to some MX races but they're not saying, to me anyways, that they'll be at 12 rounds no matter what. I just feel like Shane would, in his first year in the class, benefit from racing outdoors but maybe the team goes to all of them? We'll see. But I think McElrath had a chance to go to HEP Suzuki and chose MCR over them, which is a good thing, I think. You see, you want to give yourself every chance to do well because McElrath has one shot to put in a good first impression in the 450 class and, IMO, the MCR Honda is a better package than the HEP Suzuki. So, I like this move for Shane and I look forward to seeing how he can do over there.