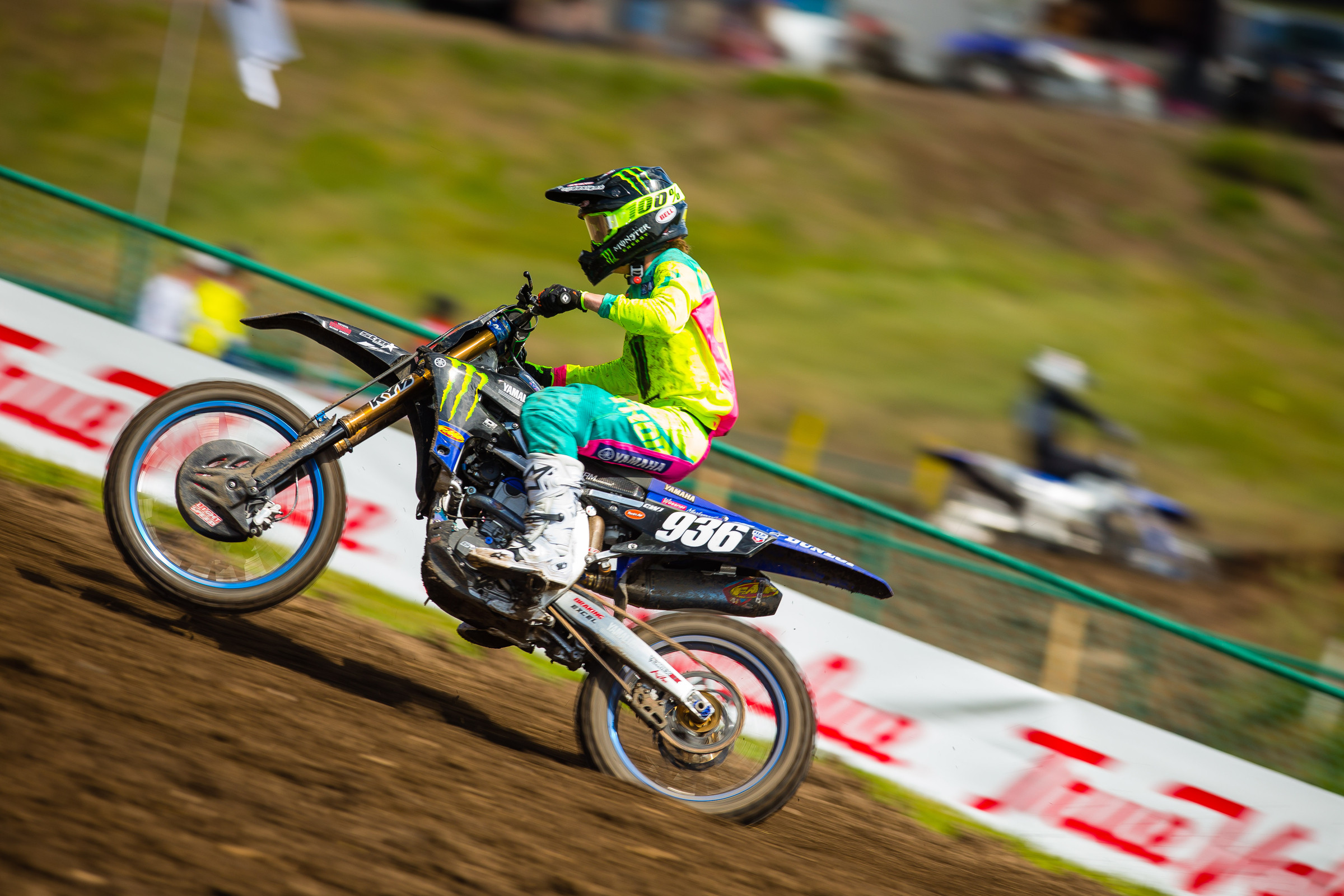 Eli Tomac was staring down the barrel of a massive, 40-point deficit to series leader Zach Osborne last week coming into Ironman, but thanks to going 2-1 for his first overall win of the season, and Osborne having a bad first moto, Tomac made substantial gains over the weekend. Instead of sitting in way back in seventh place, Tomac is now in fourth and is 27 points behind Osborne. With just 12 motos left in the season, Tomac would need to make up an average of 2.25 points per moto on Osborne to eliminate that deficit. But considering there will probably be future motos in which Osborne gets some points back, Tomac is going to need another day of big gains. –Aaron Hansel

How many times in Justin Barcia’s career have we talked about how he seemingly just finds buckets of speed seemingly out of nowhere? The Monster Energy Yamaha rider has been very good in the first three rounds, and he was absolutely astounding in the second moto last week. Even Tomac said the pace the duo was running was “pretty unbelievable,” and described the pressure being administered by Barcia as “relentless.” It’s obvious Barcia, who sits third in points, is extremely determined this summer, and has the bike and backing to match. You’ve got to think it’s only a matter of time before he notches an overall win this season. –Hansel

Well, for a moto anyway. Marvin Musquin put in a scorching ride in the first moto at Ironman Raceway, withstanding seemingly never-ending pressure from Tomac along the way, to score his first moto win in just his third round of racing all year. Ironically enough, it was this same track in 2019 where Musquin originally injured his knee after he’d won the first moto. Fortunately, history didn’t completely repeat itself, and Musquin left Ironman healthy and ready for RedBud. Sure, he probably would have liked to do a little better in the second moto (he was sixth), but he still took second overall on the day, which is a huge accomplishment after having missed an entire year of racing. We’ll see if the Red Bull KTM rider can keep it rolling on Friday. –Hansel

There are awesome fans at every single race, but if you think any venue can top the insanity of RedBud, well, you’ve never been to RedBud. It’s absolutely the wildest race of the summer, with a vibe that’s more akin to a mind-expanding music festival than motocross race. Well, things are going to be different this year, as, except for the amateur day crowd, the normally rowdy RedBud won’t have any watermelon-hat-wearing fans in attendance. As weird as it was to have an empty stadium in Salt Lake City earlier this year, how odd is it going to be without the roar of the raucous, RedBud maniacs? –Hansel

Back in the Groove?

You’d be forgiven if you found yourself wondering what in the heck has been up with Justin Cooper so far this summer. The Monster Energy/Star Racing Yamaha rider has been far off his normal pace, and while there was an admission of a small injury following supercross, the team was pretty tight lipped. Well, turns out he broke a bone in his hand a few days after the last supercross race, which affected his ability to prepare for the nationals. He looked much more like himself in the second moto at Ironman though and placed fourth overall via 8-2 moto scores. Does this mean Cooper is back? –Hansel

Is it possible to feel a high and low at the same time? That’d be a good question for Jeremy Martin. The GEICO Honda rider had to be jubilant over winning the overall, his second in a row, but at the same time it had to be a gut punch to start right with Dylan Ferrandis in the first moto, only to see him get away and win by a huge margin. And in the second moto Ferrandis went down on the start and was way, way back. Actually, all the way back in dead last. You’d think it’d be an opportunity for Martin, who won the second moto, to put some major points on Ferrandis. Well, when it was all over, Ferrandis had charged to third, giving up a measly two points to Martin. If Martin wants to win this championship, he’s going to have to figure something out, and quick. –Hansel

Ty Masterpool was about as solid as you could hope for in a young rookie when he turned pro last year. He didn’t miss a single race, finished inside the top 20 at every single round, nabbed a handful of top ten finishes, and even scored a sixth overall at RedBud. Unfortunately, a broken leg delayed his arrival to the Lucas Oil AMA Pro Motocross Championship in 2020, but he’ll be rejoining the fray this weekend at RedBud, the same track he scored a season high at last season. –Hansel

It seems that every year there’s a team that gets hit hard with injuries, and right now Monster Energy/Pro Circuit Kawasaki is one of those teams. Even their fill-in rider, Darian Sanayei, was out for a few races with a hurt shoulder! Fortunately for Pro Circuit, Sanayei has healed up enough to join the pack this weekend at RedBud 1. He’s never raced a national at RedBud, so we’ve got no data, but regardless, it’ll be nice to see him and his green Kawasaki back on the track. –Hansel

And finally, in the list of returning 250 riders, we’ve got Jalek Swoll lining back up to race RedBud 1 after a “mild concussion” at the first round put him out of action. Swoll was an extremely fast amateur, but, like Sanayei, he simply doesn’t have much pro-level experience at the nationals. In fact, the 2019 Unadilla National and Loretta Lynn’s 1 National in August are the only two nationals he’s ever raced! He’s barely into the first chapter of his career—how will his story start to shape up on Friday? -Hansel

Though the lack of the party atmosphere that RedBud usually provides will be missed this weekend, the one good part in all of this is we get two races at this great racetrack. Often discussed as a favorite by many of the riders, RedBud is without question one of the top American motocross facilities in the country. With two races being ran on this track separated by just two days, at least there is one positive to takeaway from this wild year. Let’s drop those gates at RedBud MX! -Kellen Brauer

Note: The main image of Ty Masterpool is from the 2019 Thunder Valley National (Masterpool is #41 for the 2020 AMA calendar year). Photo by Jeff Kardas.