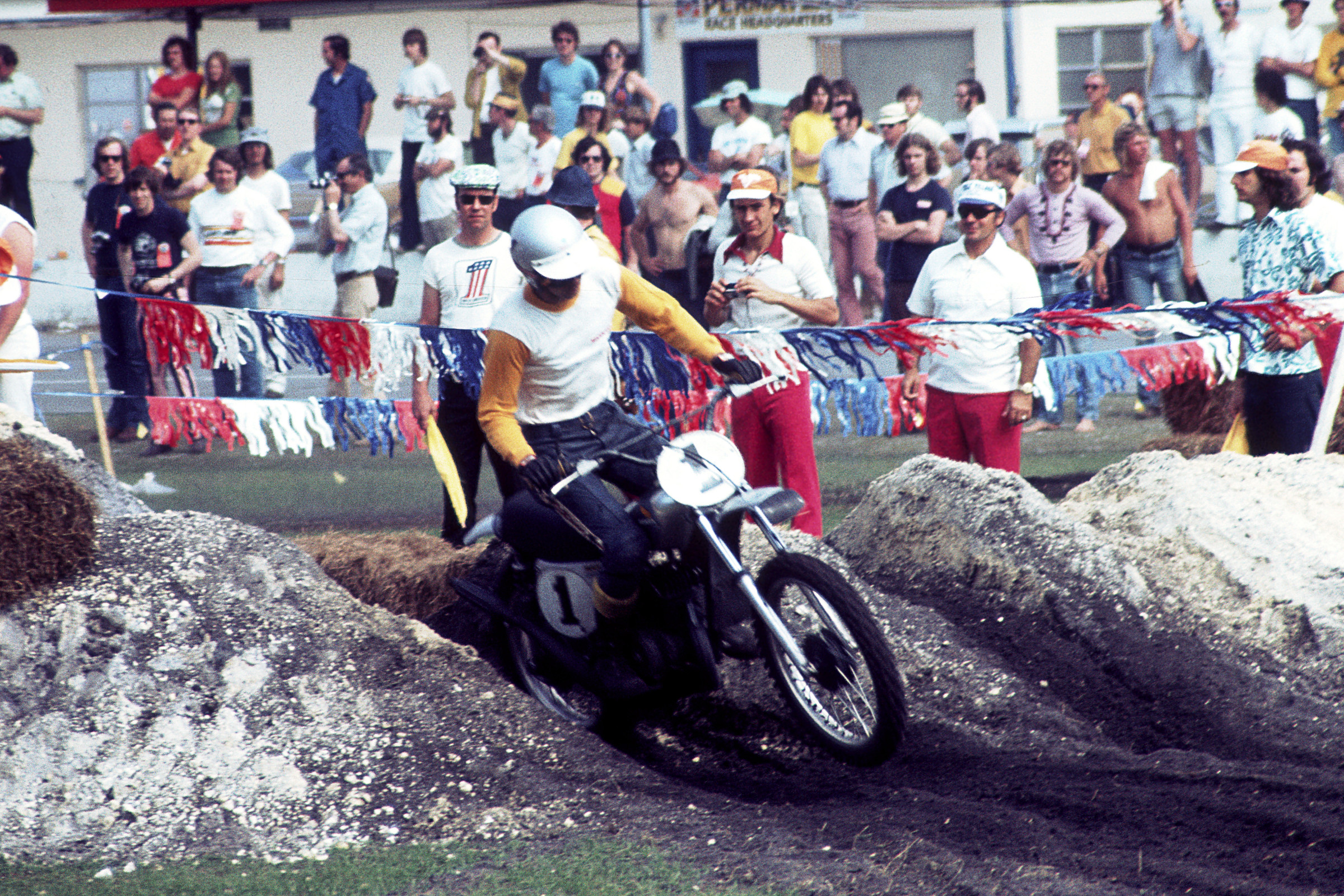 This weekend RedBud will do several things that have never been done in the 49-year history of the Lucas Oil Pro Motocross Championship. 1.) The Buchanan, Michigan track will host the first-ever AMA Pro Motocross on a Friday; 2.) RedBud will then host the first-ever AMA Pro Motocross held on a Monday; 3.) Neither race will allow spectators to buy tickets for the events, as the audience is limited to amateur motocross riders and their families that attend Saturday and Sunday's amateur "recreational motorsports" activities. Of course, this is all happening due to the Coronavirus and all of the restrictions and concerns that envelop our world in 2020. But it got us to thinking about some other unique rounds in the Lucas Oil Pro Motocross Championship, which first began with a different kind of event on April 15, 1972.

Road Atlanta 1972: Even though the influential film still in theaters at the time was called "On Any Sunday," the first-ever AMA Pro Motocross National was actually held on a Saturday--April 15, 1972, to be exact--on the infield of Road Atlanta. The motocross race was run in between a full menu of road races on what Cycle News described as "a very dusty track" for the 250 and 500 riders. The winners were both from New York, and both on CZs: Sonny DeFeo (250) and Barry Higgins (500).

Daytona 1973: The '73 AMA Pro Motocross Series started on the infield of another southern speedway, also on a Saturday and also enveloped by a bunch of road racing events. These were the pre-supercross series years, and so the Daytona event, formerly part of Bill West's Florida Winter-AMA Series, got a promotion of sorts and become the first round of the '73 Pro Motocross tour. Pierre Karsmakers (Yamaha) won the 500 class while Husqvarna rider Bob Grossi topped the 250s. The race also marked the debut of the new Honda Elsinore CR250M, piloted by the Jones brothers, Gary and Dewayne.

1974 Hangtown National: The first time that the already-popular Hangtown event appeared on the actual AMA Pro Motocross schedule was 1974, and it was very unique in that it was the first ever three-in-one round, as the 500 and 250 classes would be joined by the new 125cc class, but only for this round. The winners turned out to be Mike Hartwig (500), Billy Grossi (250) and rookie sensation Marty Smith (125), who won the first-ever 125 National in his first-ever pro race. He would go on to win the first 125 AMA National Championship. MX Sports Pro Racing recently announced that the annual rookie of the year award would now be called the Marty Smith Rookie of the Year Award in the late hero's honor.

1975 Appalachia Lake National: This obscure 1975 race was unique in that it was not only a 125 AMA National, but the last-ever Inter-Am race for the 250 class. As expected, Marty Smith won the 125 class on his works Honda while Suzuki's Tony DiStefano topped the 250 class, wrapping up the shortened three-race series title with a clean sweep. This would mark the last time an AMA Pro Motocross event would be part of any other series.

1985 Washougal National: From 1983 to 1985 the AMA ran every national as a "tripleheader," with all three classes--500, 250, 125--going on the same long day. They finally decided to scrap the idea after the 1985 series finale at Washougal, as both the 125 and 500 championship titles had been wrapped up, so the factory team decided to add 125 champion Ron Lechien and 500 runner-up David Bailey to the 250 class in order to help teammate Johnny O'Mara in his battle with Kawasaki's Jeff Ward. It didn't work, as Wardy won the 250 title anyway, and the door was left wide open for Suzuki rider A.J. Whiting to win the 125 National at Washougal and local hero Eric Eaton to win the 500 title on his Yamaha YZ490. Washougal '85 marked the last-ever tripleheader. It was also the last time full works bikes were used in AMA competition as the new Production Rule marked the end of works bike here in the U.S.

1991 Hangtown Classic: This event is the one and only time in AMA Pro Motocross history that rain completely washed out the second set of motos, as the Prairie City OHRV Park was swamped by rain, causing a small river to run down through the middle of the valley track. The winners of the two classes were a pair of journeyman privateer friends from New England and future stars in DGY Yamaha rider Doug Henry (125) and Kawasaki support rider John Dowd (250).

1993 Glen Helen National: When Glen Helen first landed on the AMA Pro Motocross schedule in 1993, event promoter Moto-Link wanted to try something different: a supercross-style one-moto main event for the 125 and 250 classes, with double-points being paid for the one main event. On a smoking hot day, Honda's Doug Henry and Kawasaki's Mike LaRocco emerged victorious. The reviews were mixed on the one-motor format, even though the AMA had already announced that they would be running just one moto in 1994. That plan was soon thrown out the window, as the more people thought about the "Supercross MX" format, the less they liked it. And while Henry would go on to win the 12-race 125 title, this race marked the end of the '93 250 National Championship, and the champion would be Mike Kiedrowski, who missed the Glen Helen finale after suffering a concussion in practice. Fortunately, he had already clinched the title.

1993 Steel City National: The end of another era, this time the 500cc class, as the AMA decided to pull the plug on 500cc racing, just as both Suzuki and Yamaha had basically already done. The last round would be Steel City in Delmont, PA, and Kawasaki's Mike Kiedrowski would take the overall win, but his teammate Mike LaRocco would claim the last-ever AMA National Championship.

1997 Gatorback National: For years, the AMA's Supercross and Pro Motocross tours overlapped, causing a lot of extra work and expense for everyone. Motocross Action's Jody Weisel even took to calling the opening round of the series at Gatorback Cycle Park in Gainesville, Florida, "the orphan national" because it happened the week before the Daytona SX and several weeks before the next outdoor round, usually Hangtown in May. Jody was right, and the AMA soon relented, turning the Gatorback MX National into the nearby Tampa SX. But the bigger story, though no one knew it at the time, was the fact that the winner of the 125 class, Pro Circuit Kawasaki's Ricky Carmichael, was just taking his first step in what would be the greatest motocross career of all-time, as RC won his first of 102 Pro Motocross wins in the one and only AMA National he would ever get to race in his home state of Florida.

2007 Budds Creek National: This race was unique in that it was the first time in AMA Pro Motocross history that a track that was hosting that year's Motocross of Nations would also be allowed to host a round of the domestic series. Back in 1987, when Unadilla became the first AMA track to host the Motocross of Nations, it was not on the national schedule. But an exception was made for Budds Creek in 2007, and the 450 MX class turned out to be a bail-biter of a battle between Suzuki's Ricky Carmichael and Kawasaki's James Stewart. Infamously, as Stewart was winning the first moto and RC was having goggles problems with the lens popping out, he threw his goggles in a trash can in the signaling area as he rode past on the last lap. But the GOAT bounced back in the second moto to take the win. He would return to Budds Creek that September for his last-ever pro race, teaming up with Ryan Villopoto and Tim Ferry to help Team USA dominated the '07 MXON.

2008 Thunder Valley National: The first-ever AMA National held under the lights, on a Saturday night, and the winner was James Stewart, on his way to a perfect summer on his Chevy Trucks Kawasaki. The lighting was decent but expensive, and after a couple of years promoter David Clabaugh went back to a daytime race.

2008 Steel City National: While the earlier '08 Thunder Valley National was also on a Saturday for the purposes of being on live TV that same night, it was at the '08 series finale that all AMA Pro Motocross events began running on Saturday instead of Sunday. The '08 Steel City National was moved from Sunday, August 31, to Saturday, August 30, at the request of several team managers and industry representatives, serving as a test case. The vast majority of riders and race teams preferred racing on Saturday, and so it's been the case ever since... Well, until RedBud 1 on Friday!