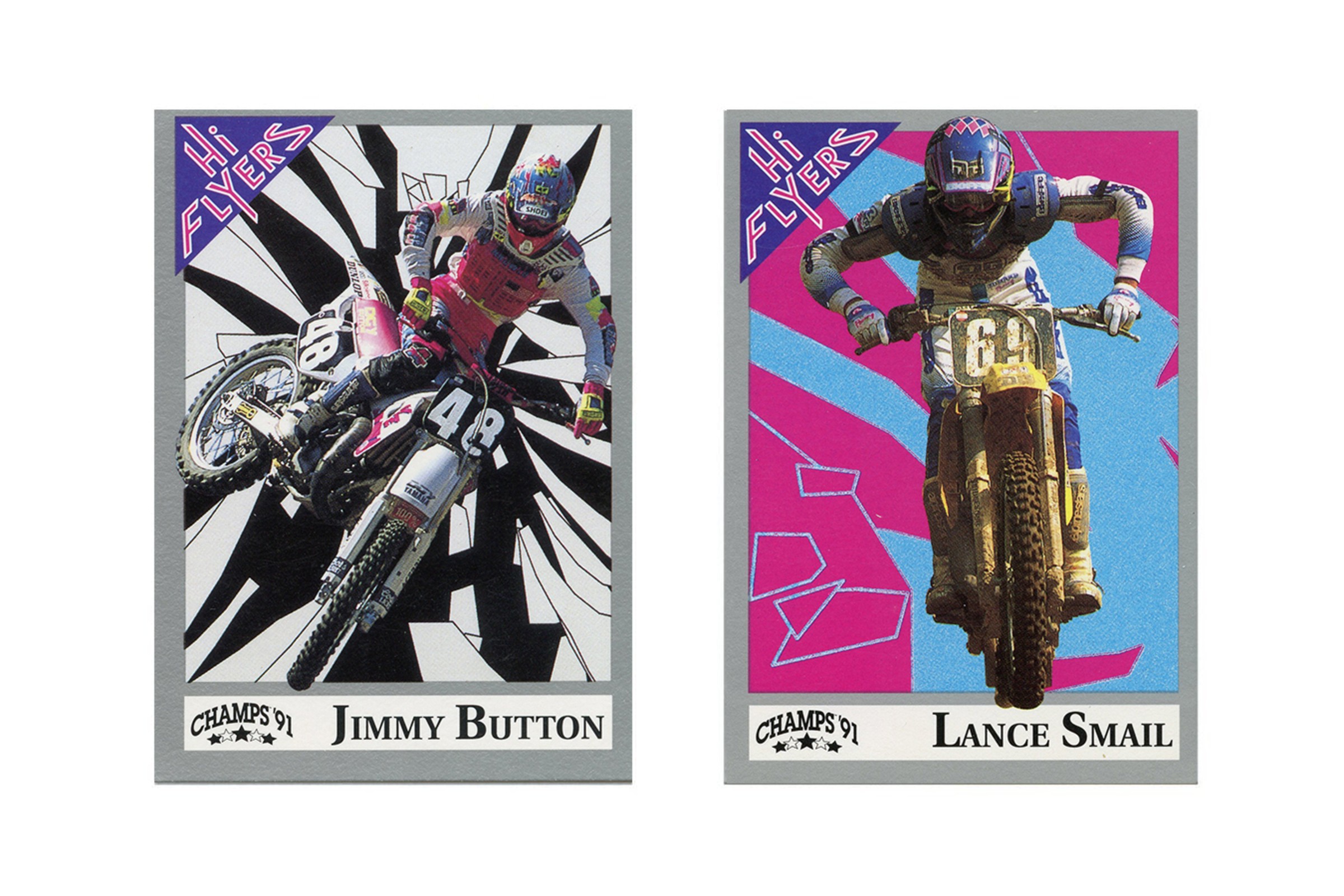 Background: Jimmy was a very big deal as an amateur and nowadays he would have a big contract and multi-year deal, but back then he was a privateer Honda rider for a year and then got the DGY Yamaha ride for a couple of years. He slowly got better each year on the team and then got a factory Suzuki ride where a lot of careers go to die but not Jimmy’s. He just had to go to Europe first! By the way, this was a very slow bike back then!

Matthes Tie-In: My first ever team I worked for as a mechanic (PJ1 Yamaha) we had Button on the team and I was always nervous around him because he was a big deal. He had come back from Europe and looking to get back on the factory bike train (which he did) so to have Button around meant that MC, Phil Lawrence, and those types of guys would come by the pit and that was weird also for me, a kid from Canada. Anyways, I got Jimmy and a couple of other people from that PJ1 team and did a podcast a few years ago.

Weirdest Thing About This Card: Well for one this is just one of two Button cards and it’s not like Jimmy was a huge star of the sport at this point…I guess Hi Flyers were fans of Button! Also, his other card is one of the few that have background in it. Also, he’s wearing Answer gear but has Sinisalo gloves on which is weird because I get that someone wouldn’t like Answer gloves but no one seemed to like those Sinisalo gloves back then either! Anyways, as you’ll read below, Jimmy’s memory of this photo is pretty good.

I asked Jimmy about this card: “So, this photo was taken at the Phoenix SX if I remember correctly. The reason I think this is because I'm using prototype Pro Taper bars. These were not yet available to the public and at the time I think it was just us [Yamaha] and Suzuki using them. The year is 1991, and by this point in the year the bike was getting a little better. Notice the cone pipe in the photo. The ‘91 YZ125 was slow, and I mean really slow, but Steve Butler [Emig’s mechanic at the time] and Bob Oliver at Yamaha had worked on this thing and got it running. We were still no match for the Splitfire PC Hondas but by the end of SX our bikes were okay. Emig’s bike was a rocket ship, as it was a full works bike and we just had some bits that were easy to make. I want to say that year I had a couple of heat race wins and a few podiums in SX, but I don’t remember much about it, other than the fact that we did well enough that the following year in ‘92 Yamaha made us more or less the factory 125 effort. Then we had really good bikes and I won a few. But, it was the successes we had in ‘91 on this bike that got us there. One last thing, the helmet I had on was the lightest helmet I ever wore. They were hand made all carbon fiber helmets from Japan, that felt like you were wearing a hat. They were completely illegal, and Shoei had gotten Snell stickers so they would pass tech. Funny thinking about that now and how things just happened back then. Definitely simpler times!!"

Background: Lance was a very talented rider for sure, he never really got a shot (like a lot of guys) on a good team to show what he could do. So most of the time he was a total privateer out there getting a ton of top tens against factory riders in 125SX. He seemed to be better at the supercross stuff than the outdoor stuff but he has plenty of good finishes in motocross as well. Did he train enough in his prime? Probably not, but he did get the awesome national number 69 though!

Matthes Tie-In: I have a bunch of buddies from BC, Canada, that raced Lance a ton at all these PNW indoor and outdoor races throughout his career. I have a lot of Lance Smail stories from them over the years. Also, I don’t know anyone in the industry that doesn’t think Lance was a cool and funny guy.

Weirdest Thing About This Card: Well Lance has a DG sticker on his helmet and at this point DG wasn’t a foremost horsepower factory like they were in the ‘80s. He’s also wearing Bieffe gear which although worn in Europe, wasn’t widely used in the USA, Lance probably got some serious cash from those guys! Nice attack style also by Lance, Gary Bailey would be proud.

I asked Lance about this card: “So this is obviously ‘91 and I am assuming the photo was shot at RedBud or Lake Sugar Tree. That was my first national number and my buddy Mike Larson and I hit the road in our box van for the summer. I am on the always slow RM 125 (at least mine were because they were stock) with 1990 Enzo suspension which worked sooo good! After the first national we went to Honda of Troy and I tried to port my own cylinder. Crazy. It was an awesome time that summer getting to race the tracks I always read about and learning how gnarly the nationals really were.

“I am in the full Euro Bieffe gear and Helmet even though I had cracked my face up in them. Being a privateer you took what was free. It was way cool to get those cards back in the day it made you feel like you were someone. They even had action ones from different tracks and I had one from RedBud with Steve Herman. Just rad stuff looking back. Last summer I signed one of these for a fan that he had for years.