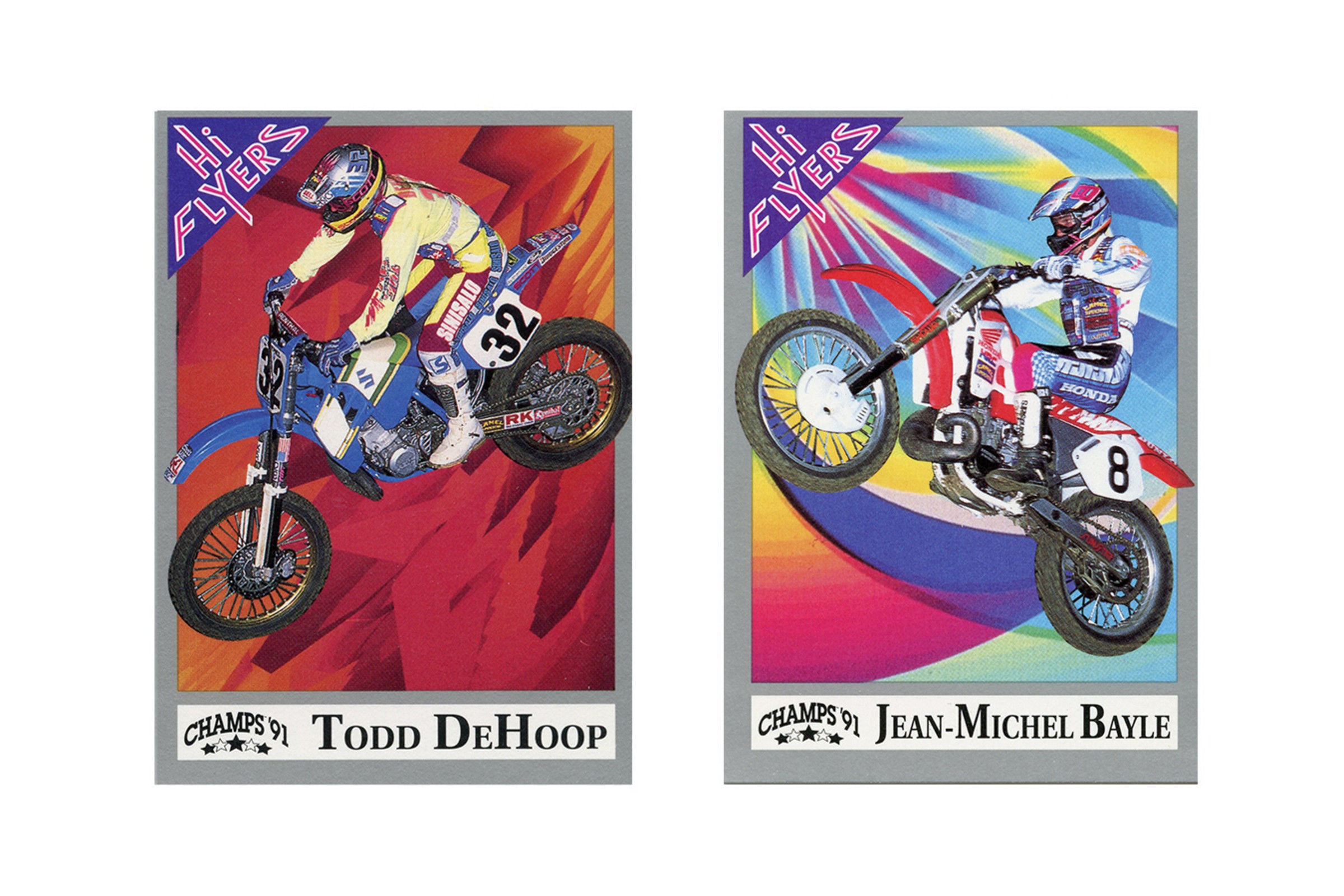 Background: Todd won the 1988 125SX East Region title as a factory Suzuki rider and then found himself back on Suzuki’s with TUF in this 1991 season. Todd was a member of the Michigan Mafia and had very good results for a long time across all the classes. He’s one of those guys, and there’s a ton of them, that got caught up in being on Suzuki which were a step behind the other teams for a while and then when Suzuki was done with them, that’s it for chances. Todd would go on to have a very respectable year this season finishing inside the top 20 in three classes and got 11th in the 500 Class series with only four finishes. He was a small guy also, so that’s impressive. DeHoop’s Racer X vault finishes were better than you remember.

Matthes Tie-In: When I worked for Kelly Smith in 2000 at KTM, long past DeHoop’s prime, he was telling me that at the local Michigan races, it was Todd that would give him trouble and beat him once in a while. I was astounded that DeHoop still raced back then and was able to beat a top-ten 125 guy! Todd still races today by the way. A few years ago, I did a podcast with Todd about his career—check it out if you missed it.

Weirdest Thing About This Card: Well the TUF color scheme is different but I kind of like it and Todd’s wearing the Sinisalo pants that really make everything standout.  TUF had a deal with Ford Auto Parts or something this season and Ron Lechien also rode for them just for the 500 Class nationals. Sweet helmet also and the old school Hi Point boots which I remember DeHoop wearing for a long time.

I asked Todd about this card: “Yes, I remember those cards very well and have a few complete sets, plus a stack of my own from multiple years. That particular year Ronnie Tichenor and I rode for TUF Racing/Ford Remanufactured Parts/Red Roof Inns. The bikes color was changed to the old Ford blue signature reman color. I finished 15th overall that year and had a best finish in supercross of 12th. I did break two fingers at Oklahoma City which made the outdoor season a struggle. I didn’t get back to speed until Lake Sugar Tree that year when I finished eighth overall. I also had a couple seventh overall finishes in the 500 national series, I had one of my best rides at Unadilla coming from behind to pass JMB on the last lap for fourth! It was also one of the few years I ever rode for FMF and Donny Elmer! Thanks for reaching out!”

Background: Well, JMB was pretty much the baddest dude on the planet in this season (1991), when he became the first rider and still the only rider to win all three big bike classes (250SX, 250 Class, 500 Class) for Factory Honda. And he was also the first non-American to win 250SX as well so yeah, he was pretty good. JMB only raced full-time in the USA for three years before going to road-racing and his win percentage and podium percentage for the three years he was here is amazing. This photo is pretty much the epitome of cool.

Matthes Tie-In: JMB is awesome, there are so many JMB stories out there and whether it’s Dave Arnold, Dan Betley, or whomever, I never miss a chance to ask people that worked with him to tell me their best JMB story. Carving his initials into the hills of Honda Land while Jeff Stanton pounded out motos, refusing to ride in support of his teammate Mike Kiedrowski in 1990, there are some legendary stories of him out there. Also, in Bercy in 2001 he jumped on a Suzuki and rode practice as there were rumors he was going to race. I was there working for Nick Wey but didn’t really see him much because I just watched JMB the whole time! He didn’t end up racing but he was just outside the top ten in times I believe! I tracked him down for a podcast in 2009 that remains one of my favorites because for a long time, he didn’t really do interviews.

Weirdest Thing About This Card: He appears to be launching into some sort of rainbow sun but other than that, pretty normal stuff here. He won his titles wearing JT Racing and the next year jumped to Taichi which was a Japanese company that appeared to sponsor him, Chicken and I don’t think I ever saw anyone actually wearing Taichi gear so that’s weird.

I asked JMB about this card: “I know this card, I still have some with me at my home! Nineteen ninety one was for me a super great season where the dream of a young Frenchman came true. I was 125cc World Champ in 1988, 250cc in 1989, but I did not consider myself as a true world champion until I won all my American titles in 1991. It was great Adventure in America, and I want to thank again all the American people who welcomed me at this time.”