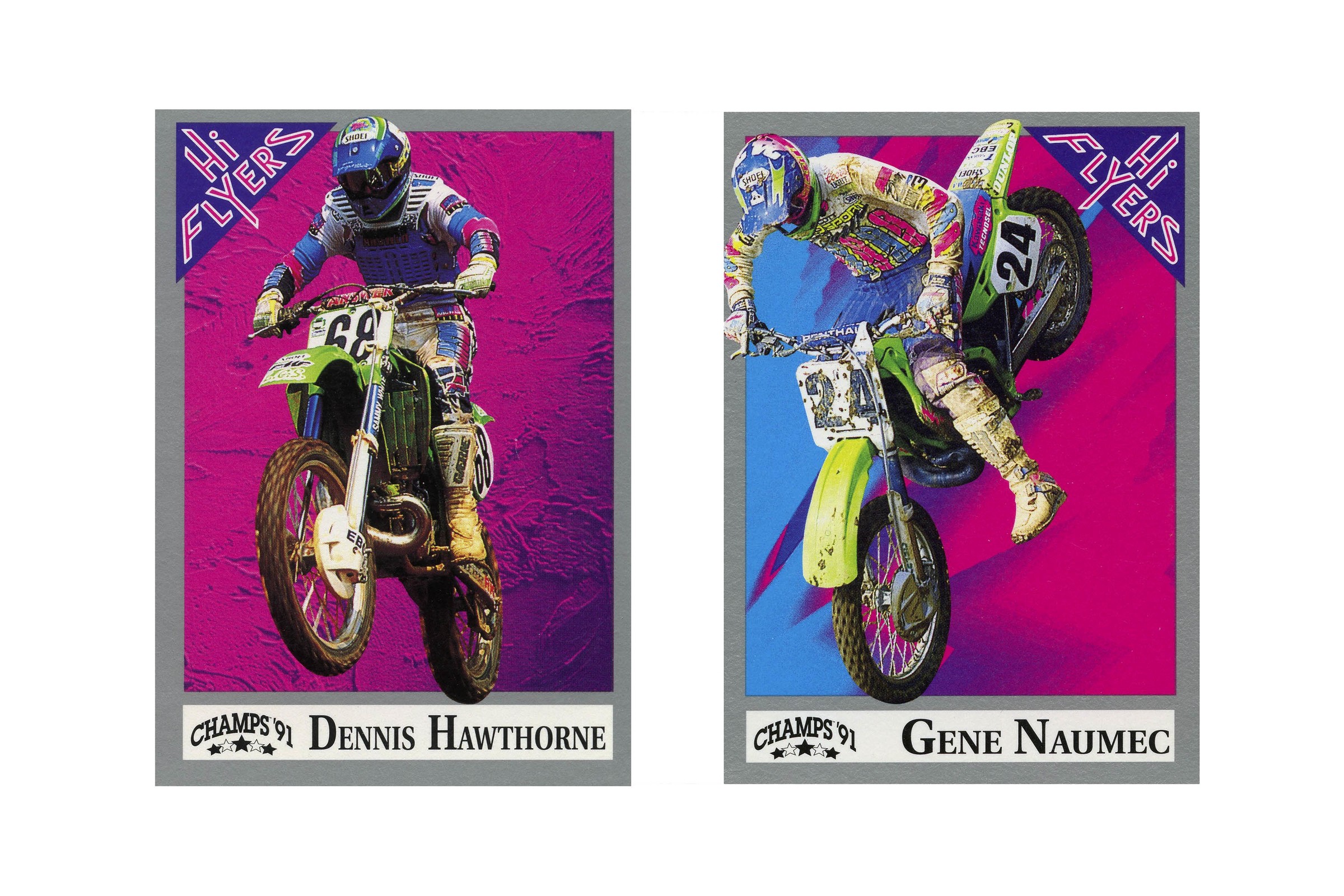 Yeah, we’re all on lockdown right now as the SX season pauses and we all try to think about what’s next. I don’t know much other than I’d like to read and listen to things that don’t use the  word “pandemic.” So why not try to walk down memory lane?

I’m going to take a look at the 1991 edition of the Hi Flyer cards (baseball cards for motocross racers was a thing for a brief time) and dive into the backstory of the card, how it ties in with myself, we’ll try to talk to the rider in the card if we can and all in all, look back at a time in the sport when things were simpler.

Check out the first two 1991 Hi Flyers cards I dug out last week on Dan Jannette and Doug Dubach.

Background:Dennis Hawthorne was Buddy Antunez before Buddy Antunez. Like so many of the racers in the ‘90s, when there are maybe ten factory riders in the world you’ve got to make a living somehow and Dennis found himself immersed in the world of Mike Kidd’s Arenacross series for a long time. Winning a bunch of races and titles in the tight indoor stuff might not be something that you would think would come naturally for Dennis because if you peruse the Racer X Vault, you can see that outdoor motocross came a whole lot easier to him. Dennis finished an impressive eighth overall in the 1987 500cc nationals, which was awesome, but was also the year that some guy named Jeff Stanton rode the wheels off his YZ490 to make his first mark on the scene and a little bit behind him was Mike Fisher who also scored strong finishes. So Dennis’s strong finish was lost a bit with those two guys coming out of nowhere. Appropriate that Hawthorne is riding a Kawasaki here because he’s been a district manager for Kawasaki for a long time now in Texas!

Matthes tie-in: I once stayed in Texas and worked out of a Kawasaki shop that I forget the name of but they were huge sponsors of Dennis and the guys there couldn’t stop talking about him.

Weirdest Thing About this Card: That he’s got the name “Sammy White” on his forks. I assume Sammy was his suspension guy back in the day but probably could’ve used a better company name? I don’t know, putting your first and last name on someone’s forks is a confident move.

I emailed with Dennis about this card: “That photo was taken on July 21, 1991 at Axton Virginia's Lake Sugar Tree MX Park. On a very hot and humid day. Champ's questions were answered there as well.  The results in Racer X's Vault show 9-36, the second moto was a DNS. I don't remember riding the last lap of that first moto and my feet felt like they were on fire. What I do recall about it is riding across the finish line and up the hill to the big ole shade tree where a guy was sitting in a lawn chair. His feet in another chair with an ice chest sitting between the two chairs.

I leaned my bike against the tree and swept his feet out of the chair and had a seat, picked up his ice chest and dumped it on me. He didn't seem to mind and actually helped me cool off. Jack Yost, my wrench and all around good guy, along with the medical staff decided it was best I sat out the second moto.

I redeemed myself the following week at Kenworthy's with 8-7 moto scores for sixth overall. Number 68 was one my highest national numbers as a result of riding very few nationals in 1990. After finishing tenth overall in the '89 National Championship Series, Team Green's manager at the time, Mark Johnson told me he didn't f****n’ care if ever rode another national again. My gig with Team Green was for Arenacross Championships, GNC Finals, and Texas Motocross Series Championships and I was able to win a few of those.

I was not a fan of the photo they chose for the card though. Not much action just completely relaxed it seems. I always enjoyed the little professor's track there in Axton though!”

Background: “Mean” Gene Naumec was a very underrated rider and like so many other guys, never made the money that he probably deserved to. He was a big guy, shined on 500s and finished sixth overall twice in the 500cc championship. And for some reason, my brother and I always cheered him on when we went to Millville as kids. We just liked the name Gene I think. There are lots of Naumec and the late Brian Swink stories floating out there in the pits. They were buddies and rode a ton together down in Florida. Gene tells a story on our podcast that his dad would build the dumbest jumps up in CT and no one wanted to jump them. They were so big and unsafe but if Swink jumped them, then his dad was satisfied they were “easy” enough. Gene told us one time some pit jump was so gnarly the guys pleaded with Brian to tell Gene’s dad that he didn’t want to jump it so that pops wouldn’t get mad at them!

Matthes Tie-In: My first year of wrenching, I was on the PJ1 Yamaha team and Anthony Paggio was wrenching for Jimmy Button. He was friends with Gene and so we carried Gene’s bike around for a race or two and then we started carrying Gene, his girlfriend at the time and their kid around for the nationals. That was weird but Gene was cool. I did a hilarious podcast with Gene that you need to check out (if you haven’t already).

Weirdest Thing About This Card: Gene was a great 500 rider, everyone knew that, so to use a photo from 250SX is a tad strange. Also, that gear was and remains cool.

I asked Gene about this card: “Well it’s in 1991 so I guess I’m around 18 years old at that time. I don’t remember exactly where they approached me about it but I’m thinking RedBud. I remember them telling me what they wanted to do and I was like how much you gonna pay me? Of course they wouldn’t pay anything. I was thinking okay so you gonna make this card of me and sell it turn a profit and I get nothing? That don’t sound right. But at that time I was hanging with Glassy [Jeff Glass] a lot and he talked me into doing it [as he talked me into a lot of things, some good some not so good]. He explained to me how we where going to use it as a marketing tool.

So we did. He had me passing them out like business cards! We used to show up to concerts, show people these cards, get with the managers and pull back stage passes. It even worked with pulling chicks. I gotta admit, it was odd at times, but it worked just how Glassy said it would. After the years passed and my racing gig was way past these, cards still pop up from time to time. I’d get some people contacting me on social media and asking if I could sign some cards for them. So they send them, I’d sign and send back. One time I asked a guy how much they cost. He told me I was going for seven dollars. That was a running joke for a while that I was worth seven dollars. LOL! But usually people just tag me in post of them but I guess you can still buy them, that’s what I’m told anyways. I don’t have any more. I think my ex wife took what I had but then again I’m not sure bout that.”