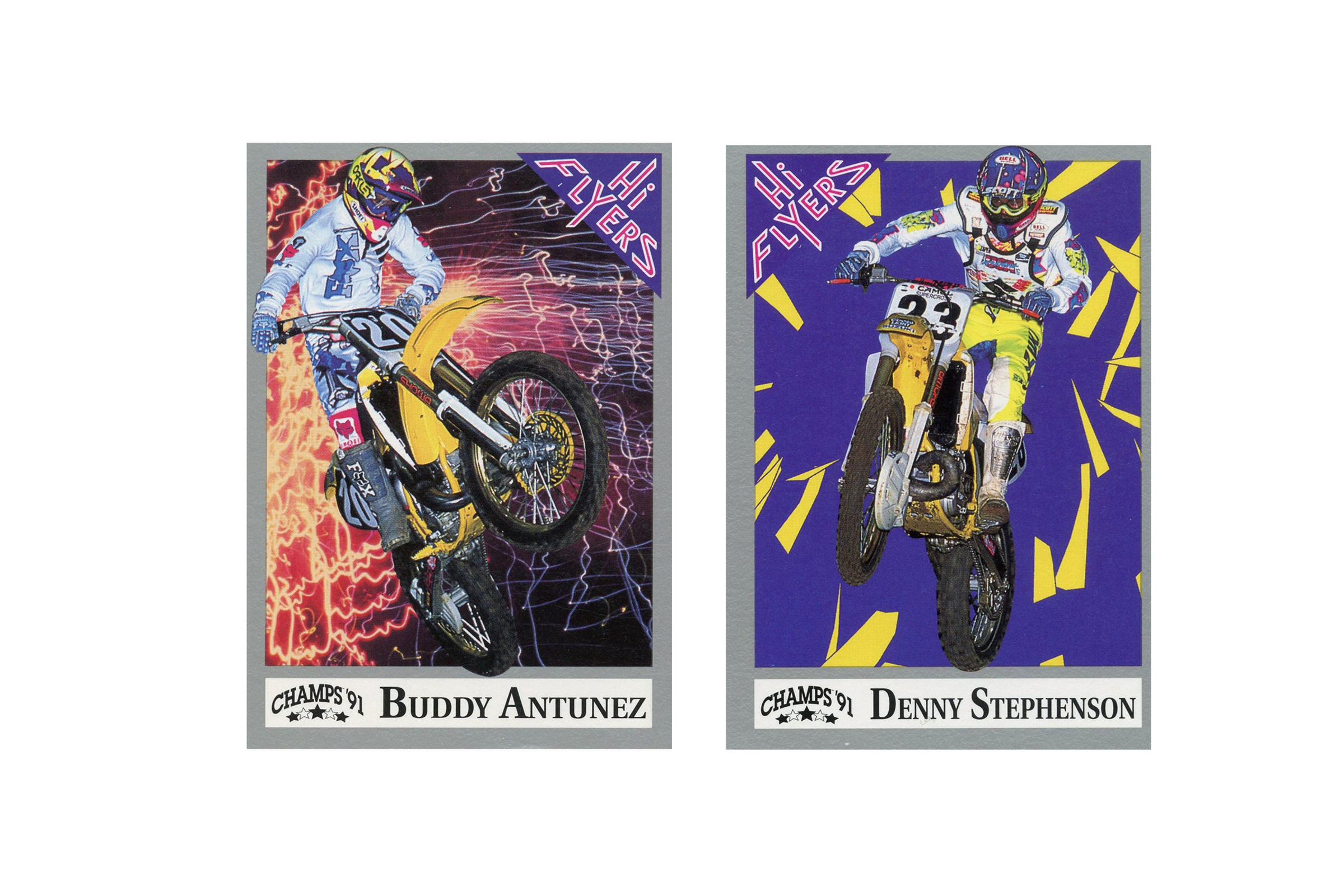 Well, we’re going back racing! Feld Entertainment has announced the Monster Energy AMA Supercross Championship will resume on May 31 in Salt Lake City, Utah. When the lockdown started, I began digging through old Cycle News archives and these old 1991 edition Hi Flyer motocross cards (baseball cards for motocross racers, which was a thing for a brief time). I’ve been looking at these for a few weeks, diving into the backstory of the card, how it ties in with myself, and then reaching out to the rider to ask if they remember much about it. All in all, it’s refreshing to look back at a time in the sport when things were simpler.

Background: Budman was one of the best amateur riders ever. When he made the jump to factory Suzuki in 1990, he won a race, made a bunch of podiums and looked to be set up for a promising career. This year, 1991, wasn’t as good for Buddy and it led to Suzuki dropping him at the end of the season. Welcome to the pros Buddy, you got two years to win races or you’re out! Ahhhh, the ‘90s. Antunez would get a PEAK Honda ride for 1992 and do well and he would also end up back on factory Suzuki (with Tony Berluti as his mechanic, the same guy that worked for him in 1990 and 1991!) in the mid-2000s. In between all that, he became the GOAT of arenacross and made a ton of money.

Matthes Tie-In: When I first met Budman in 1996 when he was crushing it on the GWB Kawasaki team, him and teammate Phil Lawrence were the top privateers at many races. He’s always been way cool and it was awesome when Factory Suzuki grabbed him back after the arenacross days were over. He had good year also teamed with his wrench from 1990-91 Tony Berluti. Anyways, Budman was helping the JGRMX/Yoshimura Suzuki Factory Racing guys out as well and works with a variety of different riders over the year coaching them up. The fact the arenacross trophy wasn’t named after him was a travesty by the way.

Weirdest Thing about This Card: Ah, where to start? It’s Budman jumping out of a fire at a neon light company! Nutty design there guys but also, Antunez is wearing that Fox bone gear which I could never wrap my head around either. Not surprising that stuff didn’t really sell.

I asked Buddy about this card: “I do remember this card and I still sign them at the races. A lot of them I’ve signed are in great shape and in cases or still in the original package, which is cool to see. But I guess that means I’m old since it’s now a collector’s item. It’s a bummer they only made them for a couple of years. The 1991 SX series was horrible for me. I had a little bit of a better MX series, with a second at Hangtown being my highlight. That was one of the worst mud races. So not too bad for a California boy. I also placed third in moto two at Southwick. That was a good battle with McGrath. Fox had the bones gear I’m wearing on the Hi Flyer card, barbed wire and a multi color set. Not sure what that was called. Tony Berluti was my mechanic that year & always made the races enjoyable & had my bikes on point. The Factory Suzuki Team that year had a lot of champions of the sport riding for them.”

Background: At this point, Stephenson had won the 1990 125SX championship and was on his way in the 250 class but like a lot of kids, didn’t quite get to the heights that some thought he would reach. Some of that was the Suzuki curse (Suzuki for years scooped up kids and didn’t have the team guidance nor bikes that were needed to really help the kids out) but some of that was also Denny probably falling into the trap of not training hard enough to make it at the very highest levels. Still, he’s got a dominant 125SX title to look at which is rad and then he moved onto arenacross and did well there also.

Matthes Tie-In: Denny’s a friend of everyone’s in the pits but I really got to know him when he became the Smith goggle guy for a few years. He also was an agent, a TV analyst for SX one year and he could do it all because everyone likes D-Bo.

Weirdest Thing about This Card: Well, it’s rare but I actually like the design of this card, the guy that laid it out didn’t do as much acid that day I guess! MS gear was pretty cool back in the day also, it was plain with bright colors and looked good on Denny, Manley and some other guys back then. Denny’s running lever skins also, which I used as a kid, and sticking with the old-school Hi Point boots also.

I asked Denny about this card: “Nineteen ninety two was a crazy year. It was my first full-time season in the big boy 250SX class and I spent the entire year in a rubber cast after breaking my navicular at OKC the year prior. Doctors told me I needed surgery and to spend six months off the bike and in a cast. Hell with that I thought. I'm in my second year of a factory ride with Suzuki and getting paid $24k. Yup. I was big time kids. Oddly enough it was one of my better seasons considering. I guess I cruised around enough not to crash and finished 12th in SX and eighth in 125 MX according to The Vault. ‘91 was also my last year with MSR before moving over to Fox. Malcolm Smith was my first real sponsor back in 83. I'll never forget going in to sign my contract, meeting the legend Malcolm Smith and marketing man and photographer Kinney Jones. They handed me a grocery cart and sent my dad I thru the warehouse that first day. To this day, I still get asked to sign old cards at the races. Those Hi Flyers are truly a collector’s item for fans and riders. Also my haircut on the back of the card is still questionable.”