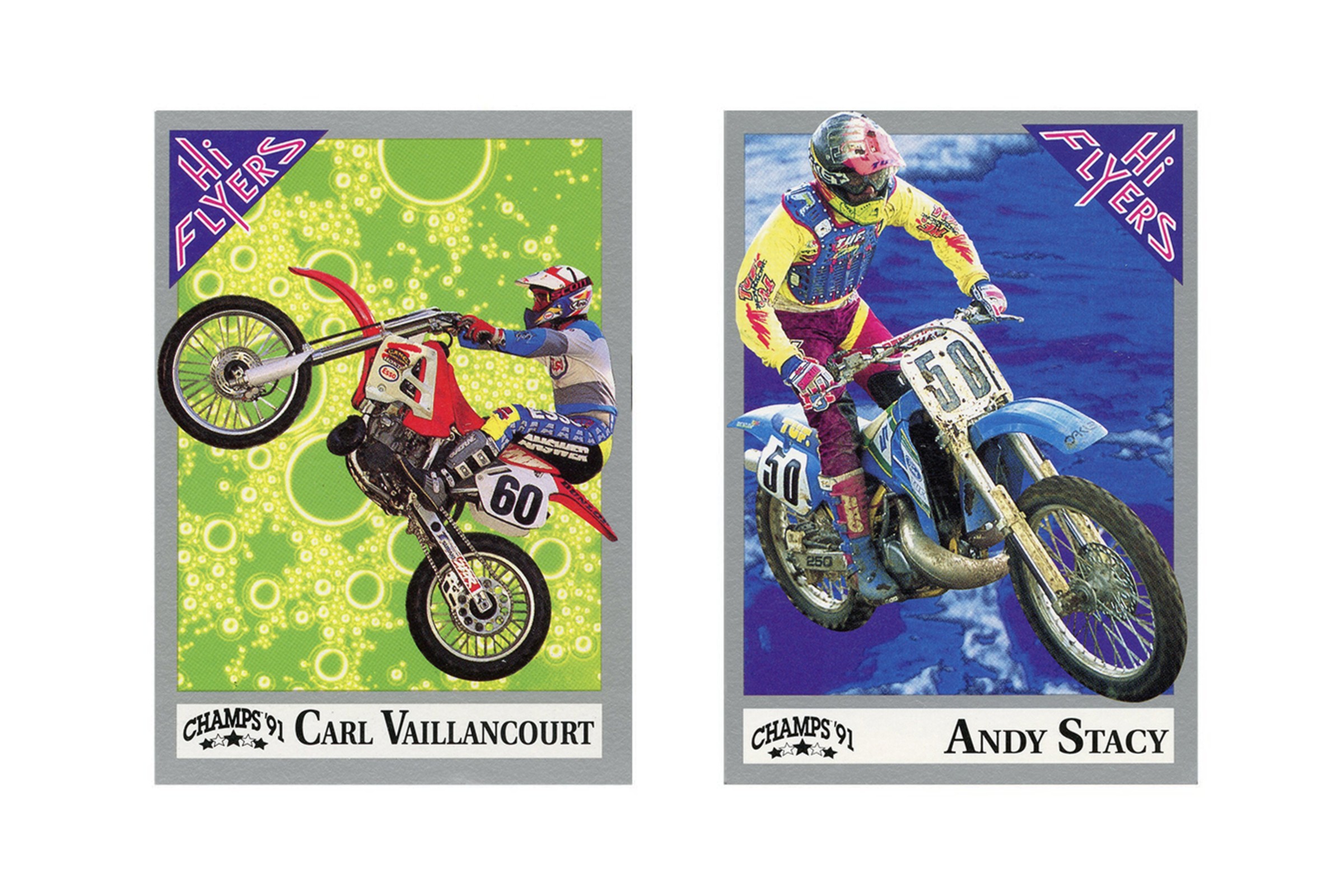 Background: Carl was very fast and a multi-time champion in my home country of Canada. He had many great USA finishes as well but he could never do the whole American series because he could always make more money in his homeland. Carl was a top ten 125SX rider in 1989 with cool black and red Answer gear and bike with Texaco as a sponsor. Back then, 125SX didn’t count for national ranking, though, so his AMA national numbers were always way higher than they should’ve been. Don’t let those numbers fool you, because Carl he was way legit.

Matthes Tie-In: Well, I didn’t know Carl in his prime and I didn’t like him much because he was the new guy to come in and try to beat my childhood hero Ross Pederson. And even though Al Dyck did manage to beat Ross, no one did it as consistently as Carl did back in the day. To be fair, Carl was just coming into his prime while Ross was exiting his. Still, Carl was a great rider that retired way too early because there just wasn’t any money in the sport in the mid-‘90s and he went on to have a successful career off the track also.

Weirdest Thing about This Card: The fact that Carl just put a Camel Supercross sticker where “Honda” would go on his well-worn shroud is weird for sure but more than that, what really stands out is the big ESSO stuff everywhere. Obviously, that which was his sponsor (along with Texaco before that) and a huge gas company in Canada. It’s a sponsor that back then was a big deal for any rider to have but most Americans, I imagined, were perplexed. Power move by Carl to still run the #1 on his helmet from a card shot in the U.S.

I asked Carl about this card: “Nineteen ninety one was supposed to be a great year for me; I was #1, had 12 bikes from Honda Canada, expense money from Honda, big parts budget, big bonus program, Dave Gowland working for me, good money from Esso-Imperial Oil and a ton of stuff from all my sponsors. But I ended up separating my shoulder in May 1991 in the last 250 moto of round two of our Canadian National in Aldergrove, B.C. I must’ve had over a minute lead on Ross [Pederson] or Al [Dyck] and I was killing the field that day. As I was lapping a slower guy I changed line on a pretty small tabletop and it as muddy and I didn’t notice this nasty kicker that made me endo and I landed on my head and shoulder. Just like that my season was over and I was so pissed!

I came back for the last two rounds at the end of the summer and won most of the motos but I ended up finishing fifth in the series after missing most of the season.

And my last chance to do good in a big race was at the Montreal SX in September but it ended up being cancelled after a chunk of concrete of the stadium fell to the ground.

In January of ’91, I was down in Florida with my second family [the New England guys] and we did Winter Ams, and I did all the US Nationals and SX. My last race before heading to begin the season in Canada was that Hangtown super muddy race. I finished 14th and my travelling buddy John Dowd won that day. I finished the year riding a few 500 U.S. Nationals and I had a few good motos. It was fun riding those big 500 on big tracks. You could really twist the throttle and let her rip!

I think the Hi-Flyers cards were a great idea and kids would come by in the pits for us to sign them. But they weren’t a big volume from my perspective, I think I signed more body parts……um, I mean…. posters and T-shirts back home in Canada! It’s too bad because those guys did put a lot of effort into this project. I still have a few of them at home.

Looking at this card reminds me of how good that CR250 was. Pro Circuit did the motor, pipe, and silencer and that thing was so freakin’ fast I would holeshot most of my races. I would ride so much in a week I would destroy bikes but I didn’t care because I had a good budget. When you ride the same bike for a long time it gets all clapped out and it ain’t fun and I feel at one point you aren’t getting anywhere. But with fresh bikes riding is so much more fun and on weekends with your race bike you don’t feel such a big gap between your practice and race bike.

All in all it was not too bad I healed up good and was able to win all the provincial championships.”

Background: Andy had a good, long career in the sport and was even a factory Husqvarna rider at one point. Not sure if you could quite consider he and Jason Anderson as teammates, though, as this was a long time ago when Husqvarnas weren’t very good but hey, technically, they rode for the same team! Andy also raced up in Canada a bunch for Team Tide which was cool. Andy’s a nice guy, very friendly and has stories for days. This card was from the tail end of his career and from a year (1991) where he didn’t score one point and lost his AMA national number. He earned it back for ’92 and would get two more years of numbers before he hung it up.

Matthes Tie-In: I was working for Parts Unlimited and doing dealer calls when I went to TUF Racing and who was there? Andy Stacy! He had purchased TUF from original owner Dave Antolak. So I got to know Andy a bit, even met him down in Florida when he was riding down there and I was at Tim Ferry’s hanging out. So we’re kind-of friends? I did a podcast with Andy that’s worth a listen a few years ago.

Weirdest Thing About This Card: Well first of all, TUF always had a good look, second of all, Andy needs to fire the mechanic that put his numbers on. He’s got Apico pants, AXO boots and chest pro, Sinisalo gloves, a homemade TUF jersey so he’s got a lot going on here. Cool looking bike though!

I asked Andy about this card: “It was cool. I was good friends with Jeff Johnson of Rad n Bad [who made the cards]. It stood for ‘riders against drugs and bikers against drugs.’ I was pretty much at the end of my time racing.  I would spend time with them at the races and dealer shows. I still have a stack of my cards. I thought it was a great idea. I think they only did it two years.”