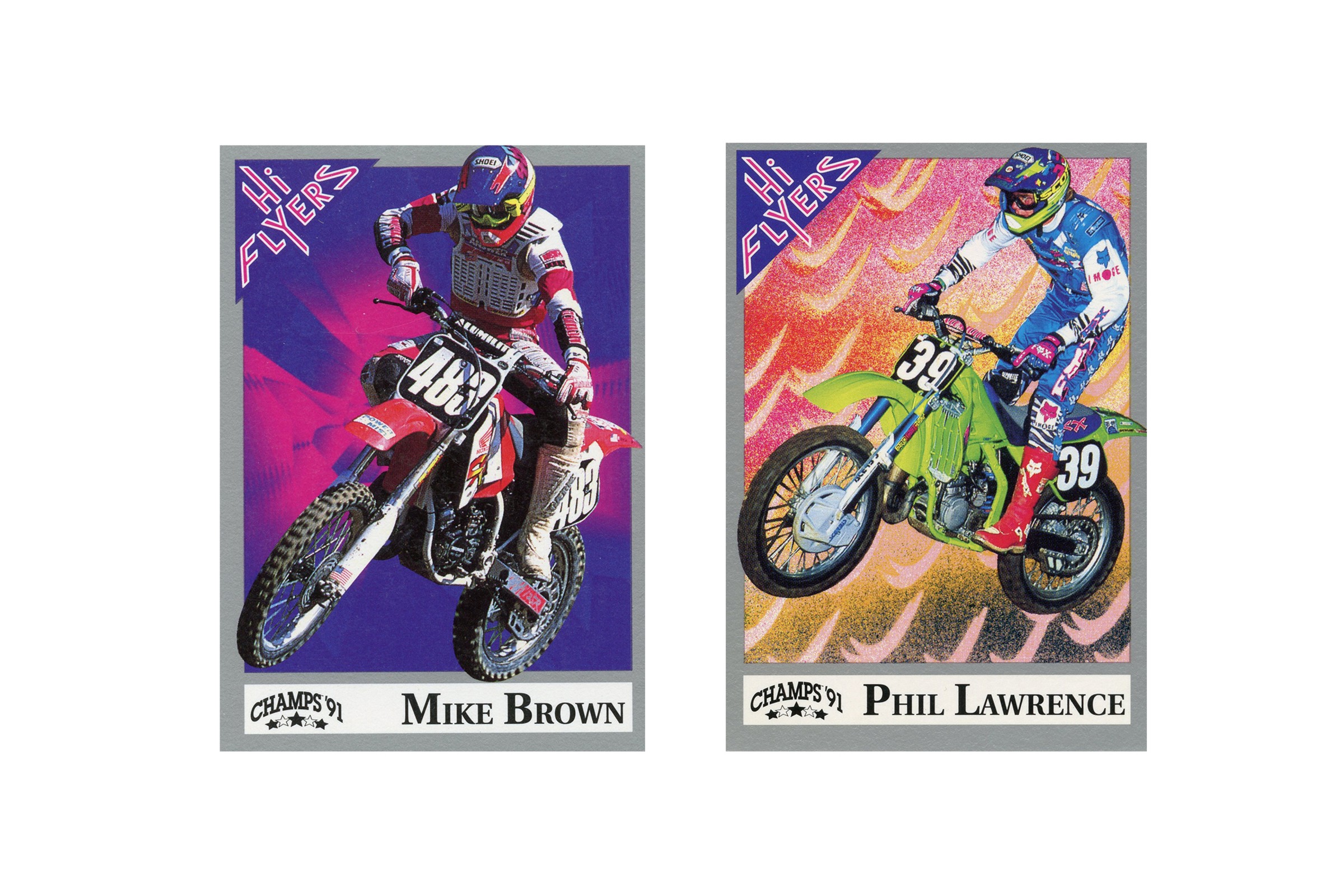 I’m going to take a look at the 1991 edition of the Hi Flyer cards (baseball cards for motocross racers, which was a thing for a brief time) and dive into the backstory of the card, how it ties in with myself, and then we’ll try to talk to the rider in if we can and all in all, look back at a time in the sport when things were simpler.

Background: Mike was a great racer for a long time. Actually, he still is! Maybe some people that were around back in Mike’s younger days could correct me, but I think of Mike as someone that surpassed expectations as a pro. The year of this card, Mike was a total privateer out of his van and he made the podium at the Pontiac SX which is impressive. When you read old CycleNews issues, you see that around his area in the Southeast, Mike seemed to race every weekend and he gave more established guys like Larry Ward and Damon Bradshaw lots of trouble as a young kid. Mike then got a Peak/Pro Circuit Honda ride for ’92 based off the rides he had in ’91, but was clipped from the team before outdoors as he, in his own words, wasn’t ready for the pressure and structure of a team. His next time at PC would go a little better. But that would come ten years later!

Matthes Tie-In: I’ve gotten to know Mike pretty well over the years and he’s awesome but the legend of Mike Brown is even better than knowing him. Texting Mike, calling Mike, trying to line something up with him is always tough to do and he knows this also. It’s actually become a funny game to ask people how hard it is to get in touch with Mike. Kris Keefer, who is also really good friends with Mike, and I laugh about trying to get Mike on the phone, it’s amazing! I did get him to do a podcast with me though about his great career but that was a miracle, pretty much, to get that to happen.

Weirdest Thing about This Card: I don’t know what’s going on with Mike here in terms of style. The Hi Flyer designers choice of just putting rainbow colors behind the riders always makes it confusing but it looks like Mike is in some serious trouble here. He’s got a very stock looking CR125, and an American flag sticker on his fork guard was a nice touch because Mike Brown is America people.

I asked Mike about this card, and yes I was actually able to get in touch with him! “This card was 1991 and think this was from Gainesville MX National that year but for all the racers the cards was big time back then to have a so called baseball card,” said Mike. “It was a good year for me, my rookie year, and then it was enough to get on Peak Pro Circuit Honda for a bit in ‘92!”

Background: Factory Phil Lawrence was in a group of kids that grew up together from Southern California including Buddy Antunez, Jeremy McGrath and many more. Although he didn’t get to the heights that some of his buddies did, he had a nice career with more than a few podium finishes in all the classes. This was early Phil, still trying to find his way in the sport and I don’t really remember much about him this year.

Matthes Tie-In: I got to know Phil when he was on the infamous Great Western Bank in 1996 as a privateer with his buddies Antunez and Denny Stephenson. He was great that year indoors and out, got a Chaparral Yamaha ride for 1997 and had another strong year. Phil was always a cool guy, very laid back and pretty funny also.

Weirdest Thing about This Card: Well, Phil’s wearing gear that Bradshaw made famous on a Yamaha on his Kawasaki but this is otherwise a strong set-up. Although this is 1991 and Fox had released the new Chameleon boot out, Phil’s wearing the much better but older Comp-2 boot.  The reason Phil got his nickname “Factory” was because he always, even as a kid, had good looking bikes and gear. And this would back that statement up, good look for Phil here!

I asked Phil about this card: “Yep, that gear looks sweet, it looks FACTORY!!! I have always been a huge fan of Fox clothing. I was super pumped to be able to ride for them for a few years. I wish I would have worried more about my riding than how I looked, LOL.  I remember riding for Team Green that year and my bikes were really good. I think that was the first year I actually placed decent in the pro class! Super fun times!!!”