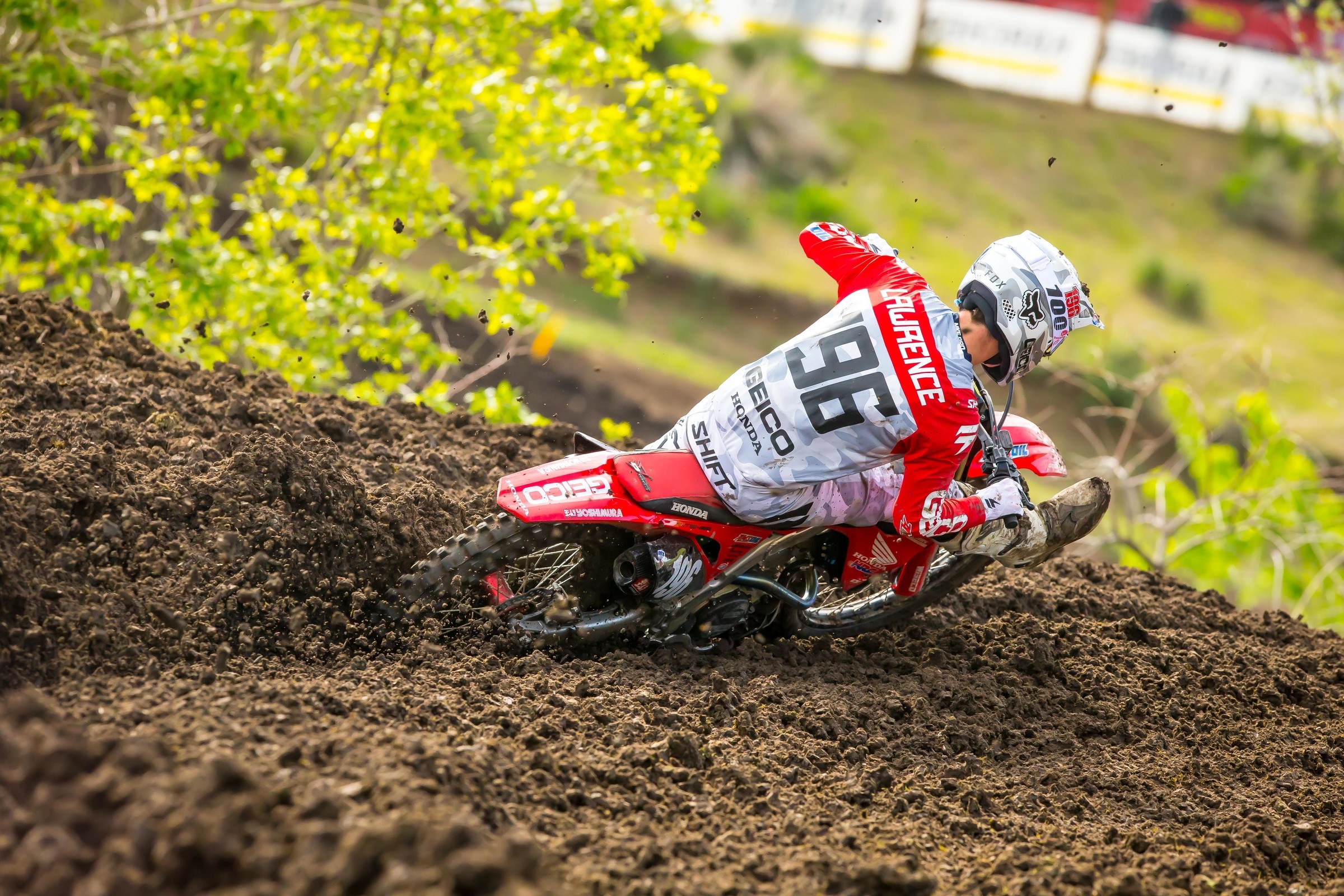 Ken Roczen's margin of victory in the first 450 moto.

Career 450 wins for Roczen, moving him past Jeff Emig on the all-time wins list. Roczen is currently eighth overall, one win behind active wins leader Eli Tomac, who has 18 career wins.

Moto wins on the season for Tomac. He’s finished 4-5 in the only two motos he hasn’t won.

Laps led on the season by Roczen. Tomac is second with 28 laps led.

Of six holeshots for the Monster Energy/Yamalube/Star Racing Yamaha team through three rounds. Cooper (3), Colt Nichols (1), and Ty Masterpool (1) each have one or more.

Different riders who have scored at least one moto podium in the 250 Class through three rounds.

Different riders who have scored at least one moto podium in the 450 Class through three rounds.

Place finish in the second moto for Jordon Smith, his first moto top 10 on the season. Smith has been dealing with a wrist injury.

Moto through six that Thomas Covington has scored points.

“It was a rough start of the day for the motos and I gave my best to come back to eighth in the first moto. Those guys out front were fast, so to catch more than that, it was difficult. I put myself in a better position to fight for the podium and the win in the second moto. Something clicked a little bit and then my riding was better—I had better lines and better flow. We improved the bike a little bit for the second moto and that was the positive.”

“It was a tough day in Colorado. I struggled a little bit in practice so it was nice to get on the podium in Moto 1. In Moto 2, I made a bike change that wasn’t good at all and I really struggled. It was a tough day but we have two weeks now to try to get better and start the east coast nationals off on a better note.”

“Big improvements for me today. I got two reasonably good starts and kind of got pulled along with the big group. We made improvements with the bike. I’m somewhat comfortable now and feel like we’re getting the train on the tracks now for the rest of the season. The conditions were demanding, the track was really rutted and rough as usual, but I liked it. I’m definitely really happy about the improvements we made and the result this weekend. It’s something to build on.”

“It was a tough day for me. I went back to Florida this week and came down with some kind of sickness. I don’t really know what it was but I had really bad migraines all week and struggled with that. I didn’t get a lot of sleep. It was difficult. I wasn’t feeling good the first moto at all and unfortunately it showed. That was really frustrating. In the second moto I felt a little bit better, kind of regrouped, got a little energy and put it all out there.

“All in all, I was happy with my bike settings and stuff like that. It seems like I’ve been making some progress, but it really hasn’t shown at the moment. I just need to use this off-week coming up to do a little testing, get healthy and go to the East Coast. That’s when I plan on really moving forward and turning it on.”

“This weekend definitely went better than the past weekends, but unfortunately it doesn’t really show that in the results. The first moto I felt like I had a really good flow and got into the zone. I started setting good lap times and picking my way through the pack. I went from 10th and almost passed into fourth before I fell over. I kind of knocked the wind out of myself because the bike just stopped in the rut and I went forward into the bars. I managed to get up and finish ninth. In the second moto I definitely didn’t have the same flow. I was just a little off and I think it was a combination of the altitude and being a bit tired from the first race. I just tried to push through it and tried to manage my energy and fight my way through, but I wasn’t able to put together the results I needed. I’m looking forward to continuing to build and get stronger.”

“Cole rode much better than his results show, especially in the first moto. He made some great passes and was really pushing forward throughout almost the entire race. He battled hard for fourth but went down and I think lost a lot of his momentum. We still need to improve his starts though because he struggled again in the second moto.”

“I’m not happy with my results from Thunder Valley. I’m bummed out, because I felt like it was my day. I had good speed early on. I somehow didn’t have any rear brake in either moto, which made things difficult. However, I rode through it and I feel good about my effort.”

“The conditions were good and the track was actually good, too. We had a little storm during Moto 1 so we had red flag and had to stop before the end. I managed to finish third, but Moto 2 wasn’t good for me. I had a bad start then crashed in the corner before the finish line and lost lots of positions today. We will work again to get ready for High Point in two weeks.”

“Definitely not what I wanted at all, I struggled with starts and couldn’t get to the front like I wanted. I just want a holeshot just to see what it’s like—I don’t think I’ve ever had a holeshot outdoors. My standards are high now. You win the supercross title, you expect to at least be on the podium, battling for race wins. I keep ending up top five which is good but I’m frustrated, I want better than that.”

“The conditions varied a lot throughout the day from practice to the downpour in the first moto, and then the second moto had a ton of ruts that were a little stickier from the rain. The first moto was tough because I didn’t get a great start. I had to make a goggle swap and in the second moto I didn’t really have the pace midway through, but I was able to manage a fourth. We will keep working. I’m looking forward to the next one.”

“Fastest qualifier which was a first for me. Good start in the first moto and made some passes to get the lead fast. Had no flow and my body tightened up so bad. Led a few laps but was struggling bad with the elevation. Dropped back to fifth. Second moto got a terrible start then crashed on lap three and went way back. Seventh on the day which was a bummer because we had speed. Regroup and be ready for High Point.”

“Mile High city was tough, but start of the day wasn’t too bad, qualified P5. First moto I had a bad start, got shut down by two blue bikes up the hill and had my work cut out for me. I fought from way back so I had used all my tear offs by the time I reached sixth place, struggling to see with the rain that started coming down. I went to make the pass and went down, finished tenth. Second moto was a struggle, with the altitude my body was feeling it. I got a little bit better start, around mid-pack and got up to seventh. It was an average day, so I’m just looking forward to the next round in two weeks.”

“This weekend wasn’t my best result, but an overall good learning experience. I was pumped and ready to ride after posting my best finish so far in the 250MX class last weekend, but the bad weather in the first moto gave me some problems and my results suffered a little bit. We’ll get back to work this week, I'm ready to be back in the top-10."

“All day long I battled myself for a bunch of reasons, but that’s still not an excuse. I’ve got work to do in these next few weeks, that’s for sure. Practice and first moto were terrible. I got myself together for the second moto and was finally feeling like myself again. I had a mid-pack start and made some early passes in the first couple laps. Then I went down and a banner got stuck in my bike which put me dead last by the time I got it out and back up. I was able to fight my way to 19th which I was happy about because everyone was spaced out pretty good by then. Really, it’s a weekend I’d like to forget but happy that I’m healthy and there’s a lot of room for improvements.”

“I'm pretty disappointed in our results this weekend. I haven’t been to this track in a couple of years and my ribs are still a little sore from my crash at Hangtown, which I feel is hindering my performance right now. I know what I’m capable of and we’ll keep putting in the work. It will be nice to have this week off from racing to fully heal and get us back up where we belong."

“I knew that Thunder Valley was going to be tough. After hurting my back the weekend before, I spent a lot of time getting therapy on my back in preparation for the race. Colorado was a struggle. I earned points, but I’m not racing just to get a few points. I’m capable of so much more. Thankfully, I have a weekend off to give my back a rest.”