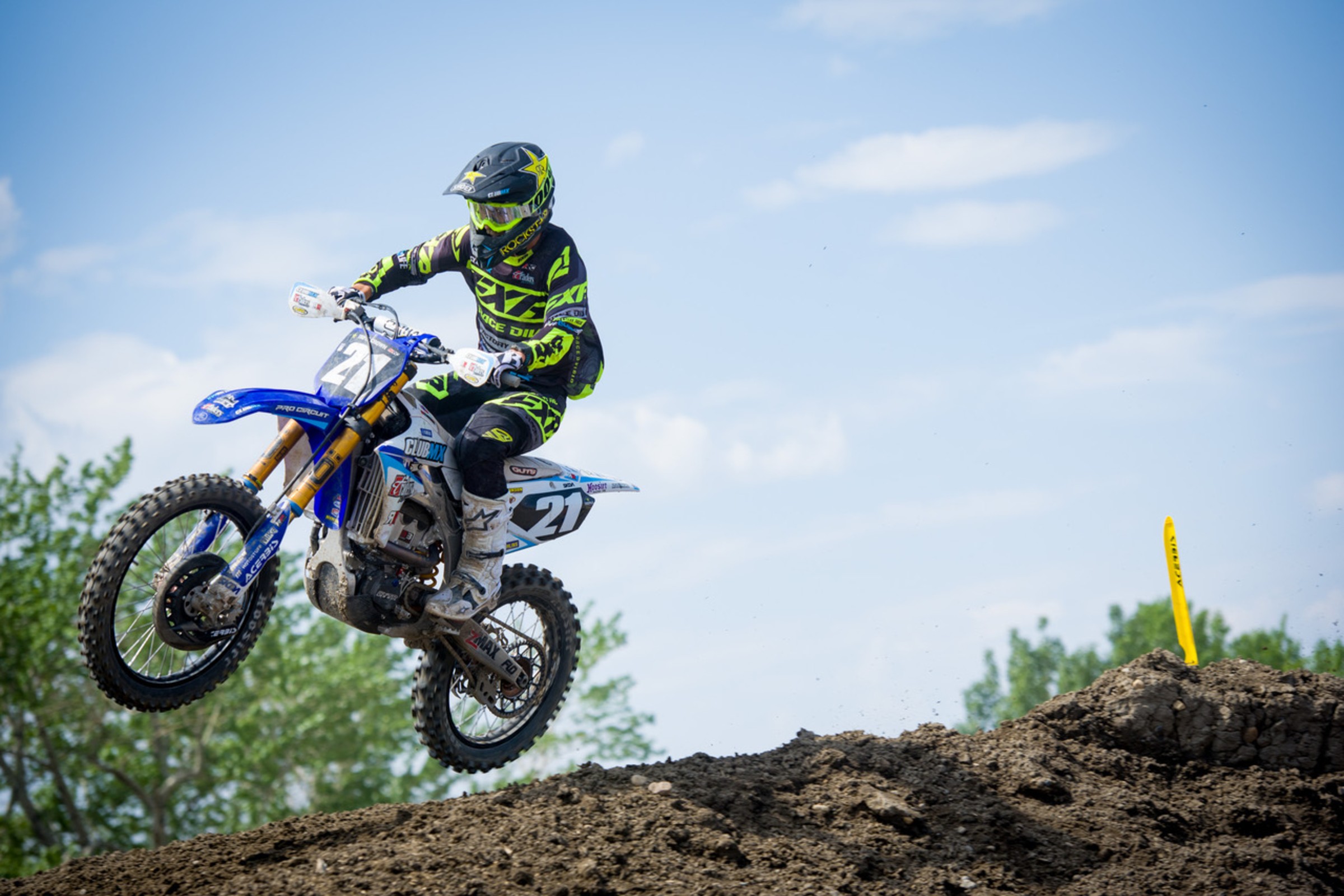 Josh Osby went 2-2 for first overall in the 250 Class at the first round of the Rockstar Energy Triple Crown Motocross Championship in Calgary on Saturday. Osby, who lives and trains at ClubMX, said he is glad to be in the mix in the 250 Class, after an injury last year held him out of the championship hunt.

We caught up to him after the race.

Racer X: Congrats on the overall win. I just told Phil Nicoletti, he went 2-2 but he got third overall, which makes this even better. I think he said some harsh words about that. Anyway, nice work.
Josh Osby: Thank you very much. I don’t think Phil was too pumped. He went down and then went completely gnarly guy. If he could have just done that, he definitely would have won.

For your ride though, good job. You’ve raced up here before. We did a little preview podcast. I was telling those guys before you got hurt that one year you were right in the mix, so why can’t you be again? That’s kind of where you’re coming from.
Yeah. It’s funny. I don’t listen to too many podcasts, but I listened to that one because I was interested. Everyone kept me under the radar and I was honestly happy about it. I knew where I was coming into this. Obviously like you said, I was in it the first year, got hurt. That was an unfortunate deal. Then last year just dealt with quite a few problems. This year we knew this was the year to try to make it happen. Just tried to have solid rides all day. I honestly was terrible off the starting line. The concrete is tough. We go from metal grates [in Monster Energy AMA Supercross], so that’s obviously the grippiest thing you can get, and then coming to concrete, I was just like lighting up my tire because I was too aggressive. So to come from the back of the pack to passing some good guys, to go 2-2 I’m happy with it.

You were catching Luke [Renzland] in the second moto. I thought you were going to get him, to be honest. You were making up some time. Did he pick it up? Did you get a little bit tire? Where was that battle going?
I put in some solid laps there and was catching up to him. I think when he saw the two-lap card, I don’t know if he was getting tired or if he was just cruising around, but I think when he saw the two-lap card it was like an all-out sprint from him. I picked up the pace too. I got pretty close at the end, but I also knew [Tyler] Medaglia was right behind me. Two-two or 2-3 I think would have still gotten the overall, so I wasn’t stressing about it but my goal was to catch Luke. Just honestly ran out of time.

I did a privateer pod with you. You weren’t sure about coming up here. What changed for you?
Just the relationship I have with these guys. I live at Club[MX]. Another thing is it’s tough to go racing by yourself out of a van. I plan to do some out of my van just with their bike in the U.S. when I can, but I just felt it was the right thing to do. I want to continue my relationship with these guys. They’re definitely on the pushing side of things. I feel like a lot of team owners get some good sponsors and they’re just kind of hanging out and it’s all good, but these guys are really pushing and making a big effort. Obviously, it all works out good for me living at Club too.

It does. It’s a natural fit for you. Track, what did you think? I was talking to Dylan Wright. He thought it was a little overwatered. Obviously, he went down in that first turn. What did you think?
Man, I honestly don’t know if I’ve ridden such an overwatered track in my life. Normally they do such a good job. Practice was good. Moto one was good. Then we got off the sight lap—I was literally riding the water truck lane on the sight lap for our second moto. I was like, this is insanely muddy. So the first probably five laps of that moto I was back in maybe tenth spot and I was just cruising. Like, Let’s get through these laps. I saw Dylan go down on the start. I just knew that I had to burn through laps and then once the track broke in then I made a push for the front.

The MX2 class to me, because Jess Pettis is off his game a little bit. He was really good last year. He was injured coming in. He hasn’t had much time. To me, this is really good. We had 6-1, 1-6, 2-2. Dylan was good. Marshal [Weltin] led some laps. I think this is going to be a really exciting class.
Yeah, exactly. Marshal was good today. There were a lot of good guys. Tanner Ward, I don’t think anyone expected him to be up there. He was up there and riding very well. I’m sure Jess will be good by the time we come East with a little bit of time to heal. We’re going to be in for a gnarly summer.

MX2 has been a little bit lacking the depth, but if all you guys stay healthy and everything this thing could be really great.
Yeah. I think it will be really good. I think it’s awesome that some U.S. guys like Marshal has come up here now. It gives people a little bit of a perspective back in the U.S., because when we come up here it’s like, “Oh, you got second, whatever,” but you don’t realize how gnarly these guys are. Obviously, Luke won the second moto. I think it’s good that they’re coming up here and it gives recognition to Canadian Motocross.