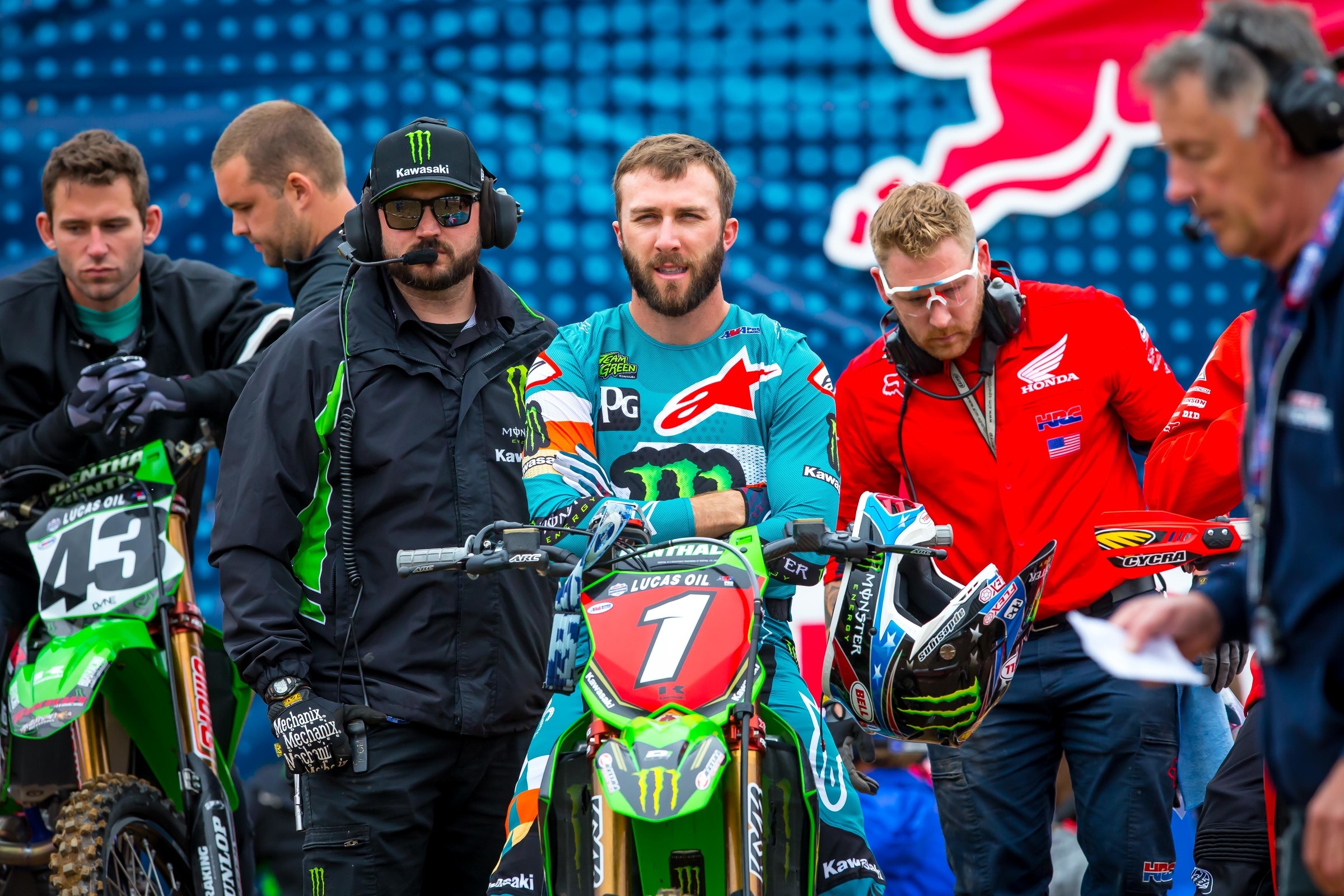 Earlier this week, Racer X asked members of the motocross world on Twitter to send their best questions in to our Jason Weigandt. He is a very knowledgeable source on several topics, ranging from flagging, saving money, and motocross racing—some of which he covers here today. Below are some of the questions Weege decided to take a deeper look into.

The Voice of the Drunken People ‪@Drunken_People

Has anyone in moto ever had a manlier beard than Eli Tomac?

If you look through footage from 2016 through 2019, Eli’s beard has evolved more than that bike setup he’s always chasing. Went from three-day-growth to full on, but it happened so slowly that you barely noticed. It’s kind of the way Tomac does it, right? Just keeps building steam slowly and then all of a sudden you glance at the lap times and you’re like “Oh man, he’s so gnarly now and I don’t think anyone can match it.”

He definitely has nearly all of his peers beat on beard gnarliness (First off, half of the riders right now need to just give up and shave it. You’re all little guys in your early twenties, the beard thing isn’t going to work. It’s not like baseball players, who could probably be donors for anyone with Low T. They bleed testosterone when they’re cut).

The only rider today that can match a Tomac beard is Justin Bogle, but of course his is all cool and stylized whereas Tomac’s is just mountain man gnarly. It fits their personality.

By the way I’ve tried to grow both a Bogle beard and a Tomac beard and failed at both. Just shave it, guys!

As for all-time, though, Eli isn’t even close. Kevin Windham has to shave five times a day. Brad Lackey, well, we should just name beards “Brads” because he had the one everyone would aspire to.

Eli is the best of his bunch, but all-time? Hmmmm, let’s look at the next question.

The Rubber Side Down

Redo Fox Raceway at Pala moto 1, with Stew, Poto, Reed, Dungey, Tomac, Roczen all in their prime on the line. Can Tomac still come from behind and win? What would be your finishing order?

Yeah thanks for throwing some hypothetical warfare at me, Rubber Side Down, which means I can’t be wrong but also absolutely can’t be right.

I believe, when he kicks into full gnarly mode, Eli is as fast, peak top-end speed, as anyone that has ever raced nationals. (Please back away from the computer, Herlings fans. He might be even faster but I’m sticking with the question above because GPs vs U.S. is like arguing over religion).

I think Eli already showed he could beat Dungey outdoors. I think he can get Reed outdoors. I think peak Eli can run with a prime Stew, Kenny, and RV, but, I don’t know if he can just make mincemeat of them coming from the back. The 2016 Roczen was gone in an instant. Peak Stew was a great sprinter and starter and so was RV. I will have to say no, he’s not going to just blow their doors off from eight seconds back. By the way, is it possible that some of Eli’s ridiculous late-race speed comes because he’s not going balls out in the first few laps of the race? Dudes can actually get tired, right?

Give Eli the start and I think he can run with anyone, ever. Well, not quite everyone. The 2006/2007 Suzuki 450 four-stroke mounted Ricky Carmichael was peak everything for motocross.

Is Tomac the man to beat for the 3rd year in a row?

Pala 2019 looked way too much like most of the races from 2018 for me to think any other way. Once again they had him on the ropes, once again he dialed in a kick at the end no one could match. I know “Eli’s gonna Eli” and you expect some weird races here and there, but if you look closely at the 2018 450 Lucas Oil AMA Pro Motocross Championship, we didn’t get any of that. His bike broke while leading at RedBud, then he sucked in the second moto. Beyond that, he was on fire just about every other weekend all summer. I don’t think he’s shaky outdoors anymore. This is scary for everyone else.

Looking to buy a watch with a loud alarm. Recommendations?

I have one I would like to get rid of, that’s for sure.

How many times a year can you sign up for a free trial of HBO before they wise up?

I’ll find out when they wise up to me stealing my mom’s password.

Jason/Lord Alfred, did it gross you out when the cat was walking around on the buffet table in that INXS video?

Hey Rup. Lord Alfred has been taking a cold shower ever since Herlings’ return was announced.

I found this info on said video:

We made a crazy video at home in Australia for "The One Thing." We fed valium to a few cats and had them running around a table while we had a feast with sexy models and Playboy centerfolds, ripping apart a turkey.

I mean, can ANYONE have a problem with that?

Who is more likely to feature in the next @AEnticknap722 film clip as a dancer, Justin Bogle or Aaron Plessinger?

Now that’s a great question. I think Bogle is too knowledgeable and discerning with his music tastes. Has anyone ever asked him what he thinks of the Deuce Deuce rap skills? I have to wonder if he feels like he operates at a totally different level.

Now AP, meanwhile, will do anything and then laugh about all of it. So he definitely is the more likely candidate here. Heck, I’m surprised he didn’t show up in Seattle (where Adam shot the vid) and pimp walk his way through it on a broken heel. He would have looked the part.

I don’t know if you can answer but it’s kind annoying on the broadcasts to see the running order it takes up a lot of screen and the split screen is annoying and can you all focus on other riders a little more.

I can answer anything. To me, the running order is awesome, because it allows you to see where everyone is at a glance. In the past we had a scroll at the top but it would only show about five riders at a time, so if your favorite dude is coming back from a first-turn crash, it was really hard to track his progress. Rarely is there any action on camera in that very side of the shot, I feel like we lose a tiny bit and gain back a whole bunch of good info.

Bottom line, there are 40 riders out there at once in Pro Motocross and 22 out there in supercross. It’s impossible to show everything and everyone enough, but I can tell you the TV staff (which is basically the same on both supercross and motocross, by the way) sweats this hard and really, really tries. But they’re trying to do the impossible. You’re always going to miss something.

After a few supercross rounds, Cooper Webb was able to consistently find his way to the top positions. Could it be about to happen in motocross too? Or will he stay "slower"?

With almost any other rider, I’d say this is just a sign of things to come. But, Cooper is one of the smartest riders out there, and if anyone could just say “I’m not there yet, I’ll just take whatever results I get today and be back and better soon” it would be Webb. I also think Pala does not play to his strengths at all. The more technical the track, the more Webb’s smarts and skills come into play. So I think there could be a lot more in the tank than we saw last weekend.

Which two-stroke Rider, Gared “Stank Dag” Steinke or Chris Alldredge, has a better chance of scoring points this year?

I think All-Doctor-Edge has more top-end speed than Stank, so I’d say he’s more likely, but I don’t think he’s doing all the races, so that will probably hurt his odds. In 24 motos, I think Stank smokes enough four strokes to put his two-smoke in the points once. Hey, do you know Stank Dog trains for two 30-minute plus two lap motos? By doing four 20s.

Coming back of injuries @elhombre_21 is riding very fast and after two rounds has finished up top in both OA, can JA win a few motos and OAs and steal this championship from @elitomac ?

Anderson is good outdoors and if you watch him ride by himself you would swear it’s impossible for anyone to go faster. And yet, somehow, Tomac ends up being faster when it counts most of the time—as in, like, for their entire careers. One of these days it’s going to work out for Anderson to get an overall, he’s always at the front. Title? That will probably take a few breaks to go his way.

With Aaron Plessinger’s upcoming return, how do you expect he will fit into the 450 Class? Do you believe his return will be as strong as Jason Anderson’s?

I think it will be tougher on Aaron because everyone tells me heel injuries are really, really gnarly. Second, it’s his first year on the 450, whereas Anderson skipped testing and went straight to racing with his 2018 setup. Finally, everyone improves rapidly in the first two or three rounds of the series, and Aaron missed all that. He’ll be working on bike setup, jitters, fitness and more when he returns, while everyone else will be in mid-season form. It’s going to be tough.

Does Fox Raceway stay on the schedule next year or back to Glen Helen?

I think the reason the race went away from Pala after 2011 was because the previous track operator messed some stuff up. The folks operating that track now, like Myron Short of 2X Promotions, know what they’re doing. I think it comes back.

Who is the most legitimate threat to ET3 this summer, other than himself?

Kenny is such a wild card here. If he gets anywhere near 2016 Kenny, it’s on. Plus, you know he thinks he’s good enough to beat Eli, because Kenny is head strong and that’s a huge part of this.

One other option I’ll throw out is Wacko Zacho. I think he’s going to make some serious noise at some point.

But yeah, Eli’s biggest threat is probably messing this up himself.

Would the series ever expand to 13 rounds with Glen Helen Returning eventually and Muddy Creek?

No chance, as teams and riders are asking to do fewer races, not more. I keep hearing this “season is too long” refrain as if this is something new. Did you know in 1990, almost 30 years ago, the season featured 18 supercrosses and 13 Nationals? The final race of that season took place in October! That’s one additional race in each series than now (although supercross gained the extra race via a double header in Pontiac. Whatever, that’s still more stress and an extra day on the road).

You’re not going to see more races, no. As for tracks, several have left and come back so never say never. I mean, Southwick closed at one point and re-opened. You never know what could happen.