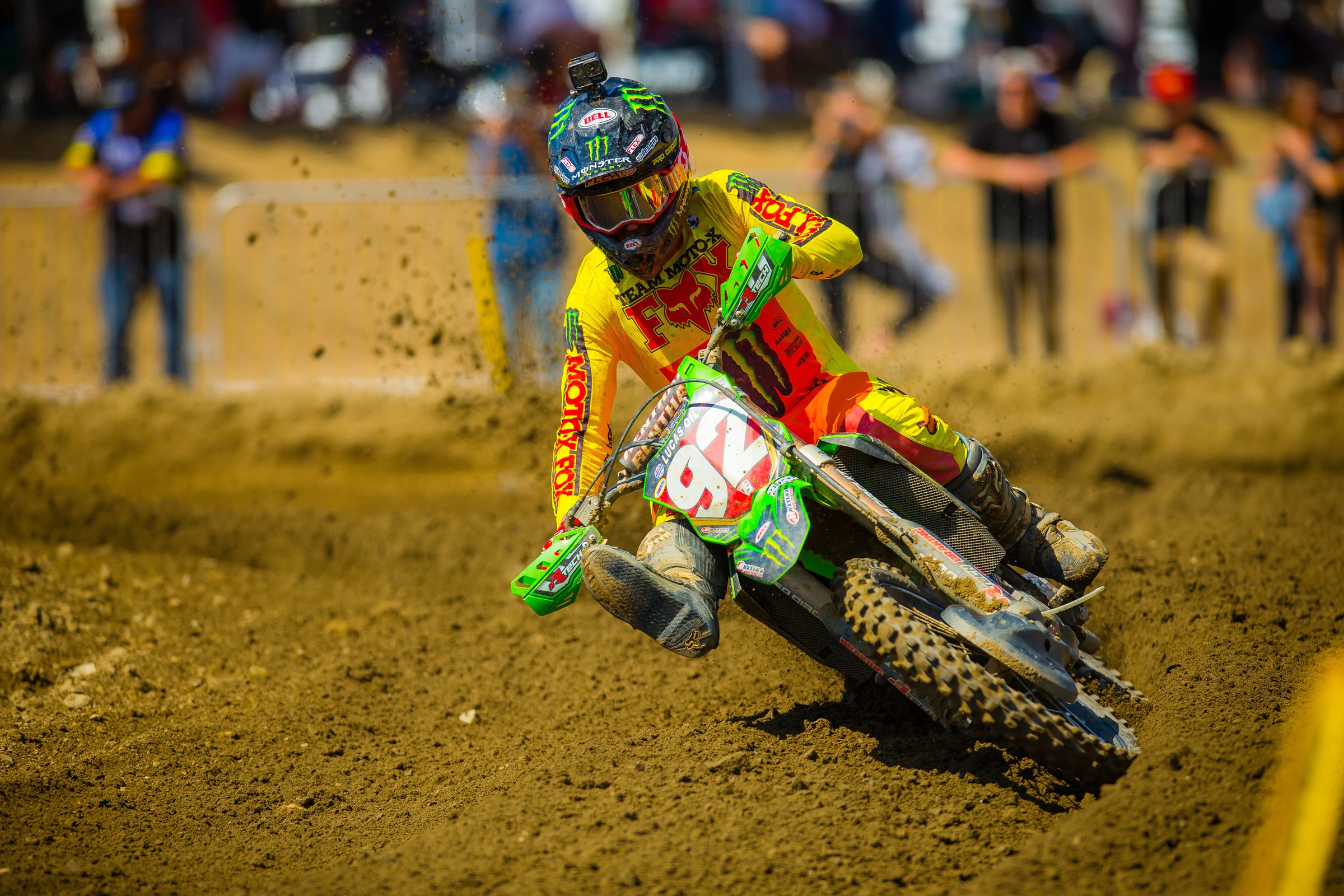 A hell of a lot can transpire during a month of AMA Supercross and Motocross. Just ask Adam Cianciarulo. First came Saturday, May 4, 2019, and what appeared to be an almost sure thing of a 250SX West Region Championship evaporated with an almost surreal late crash. The heartbreak for the Monster Energy/Pro Circuit Kawasaki rider was, well, immeasurable.

After a weekend off, Cianciarulo showed up at Hangtown on May 18 for the premier race of the 2019 Lucas Oil AMA Pro Motocross Championship and won the overall. One week later, this time at Fox Raceway at Pala in Southern California, Cianciarulo won again. An up-down and all-around month for the kid out of Port Orange, Florida, Cianciarulo has been front and center and living it when it comes to the radical highs and radical lows that come from being a title contending rider.

On Thursday morning, Racer X caught up with the 250 red plate holder to talk about the past, present, and future of the ’19 race season.

Racer X: Have you ever heard of the expression that nothing worth having comes easy?
Adam Cianciarulo: Oh yeah. A million times. These past two outdoor races have definitely been a good way to get things rolling. I’ve just been proving it to myself that I can do it. I’ve been building on it and it feels good. I think to succeed at the level we compete at requires everything. It requires work ethic, it requires talent because ultimately there have been a lot of guys that have made sacrifices and they have a lot of talent themselves and we’re all gunning for the same thing. It’s never going to be easy. I think that’s what makes it so rewarding and so good is battling with these guys every weekend and when you do come out on top and make it happen, man, it feels like you’re on top of the world and we’re just always chasing that feeling of winning and winning a championship. That’s the ultimate goal and that’s what we’re striving for.

How does it feel to have that red plates affixed to your bike after four motos? You’ve been sort of typecast as a supercross guy, but you’re certainly going good outdoors.
Yeah, it feels good. I’m reluctant to get too excited about it just because we are so early in the championship, but it is definitely neat to start it off on the right foot. Like you said, I haven’t consistently been too good in the outdoors in the past so to kind of come out and make a statement these first couple rounds that I’m for real and ready to battle for this title. It feels good because I think a lot of people were already kind of counting me out a little bit and I’m definitely carrying a bit of a chip on my shoulder this summer for sure. I think that in the past my preparation for outdoors hasn’t been too great. Ever since my rookie year in 2013 I didn’t come in healthy. In 2015 I raced, which was coming off an injury; 2016 was the same thing. In 2017, the last year I raced, I had a torn ACL I was dealing with all year that was kind of holding me back a tad. I’m older now. I’m a veteran of the class and I have more experience and I think it’s all coming together for me, but with that being said, we can’t get complacent and we have to better and going for it.

Perhaps more than any other rider in the 250cc ranks in recent years, you’ve experienced and/or suffered huge spikes of both good and bad racing luck. I’ve known you since you were a minicycle racer and you’ve always struck me as an athlete who just isn’t going to give up until your goals and objectives are met. It’s not easy, but it’s very admirable. You’re a fighter.
Yeah, thank you. Yeah, it’s definitely been a roller coaster. As far as success goes with everything I’ve gone through with injuries and little heartbreaks here and there, I can’t stress enough how much the good times outweigh the bad. I think some people kind of have this perception of me that nothing can over go right for me or something, but if people could live a day in my shoes and see how fortunate I am and see all of the opportunities that I have and the things that I get to do and just how happy those things make me. I have had some tough breaks here and there, but in the end, man, I wouldn’t trade my life for the world. I lived these last five or six years again because it’s mainly the person I am. I think in life, whether it’s the success you have in your sport or in business or whatever it is, everybody has struggles and I think life is just up-and-down and you just have to deal with it appropriately.

We’ll hit the month of June this weekend and like you’re talking about, the Lucas Oil AMA Pro Motocross Championship is at full sail, you’ll soon be racing in the Eastern half of the nation and you’ve got some serious momentum at your back. A lot to look forward to, huh?
Exactly. I think that’s kind of where my mind went the week after Vegas. It’s just pressing forward and doing my best to not think about the championship and just focus on winning races. I just want to go out there and ride and do the best I can every lap. That’s what I’ve done so far and my competition, the guys that I’m racing against, man, they’re all riding so good and that’s made it so much sweeter at theses first couple of races. Obviously I know everybody is going to be gunning for me here as we get deeper into this championship. I’m just going to take it moto by moto and not worry about it too much. I’ve been having a lot of fun so far, the team has got a great attitude and everybody around me is super-stoked and having a good time so we’re hoping to keep the good vibes rolling through the summer.

Now that a bit of time has gone by, when you look back over your shoulder, what’s your take on both the Hangtown Motocross Classic and Fox Raceway National?
I’ve been preparing for this year ever since the off-season and coming back from my knee injury. Everything that I’ve done so far training-wise was and is to try and set myself up to be as fit and as strong as I can possible be. I know coming into outdoors I had an idea of where I was and I thought I could certainly be competitive. I think this year going into Hangtown I certainly went in with intent to win. Same thing for Pala. Hangtown, obviously we had the weather roll in so that made it pretty dicey, but I got a couple of good starts and everything kind of clicked for me that day; everything flowed and it all went well and good. Pala seemed like a completely different race. I had to fight like hell to come through the pack and make passes on those guys. I had a challenge with Hunter Lawrence there in the second moto. He was riding really good and that was fun and challenging. When I got done with that one, I felt like I had fought a couple wars, as opposed to Hangtown where it all went pretty smooth. For lack of a better word, Hangtown felt easy compared to Pala. Two very different races for me. That honestly gives me even more confidence knowing that I could make it happen in both of those scenarios.

You’ll race at Thunder Valley on the outskirts of Denver in 48 hours’ time. Do you like the venue and the circuit? Are you looking forward to it?
Yeah, I love Denver. I actually got my first outdoor podium there in 2015. I’ve always enjoyed going there and going to the city. I vibe really well with that place and just enjoy being there. I also had some success in Denver this year when I won the supercross. Hopefully we can make it two for two in Denver.

I have to ask the question or people will want to kill me: There have been reverberations in the moto world that you’ll be riding a works Monster Energy Kawasaki 450 alongside Eli Tomac in 2020. What can you tell us?
I think right now, and as I alluded to earlier, I just want to focus on every single race and every single moto and allow my mind to get too far ahead of itself. I think that would be a disservice to everyone around me and to everyone supporting me. Basically, and until further notice, my focus is on every weekend. We’ll figure out next year after the Ironman National.

The great NFL coach Vince Lombardi once quipped: “The harder you work, the harder it is to surrender.” I figured these words are very applicable to both you and your determined plight to be a champion.
Yeah, I think that can certainly apply to me. I feel this kind of calmness right, honestly. I felt that way at Hangtown and I felt this way at Pala. I have this confidence in myself right now that I think I’ve sometimes lacked a little bit in the past. I feel good. I feel like I’m able to put my best foot forward and to give it everything I have. I feel strong and feel like I’m about ready to go to the next level and ready to progress.