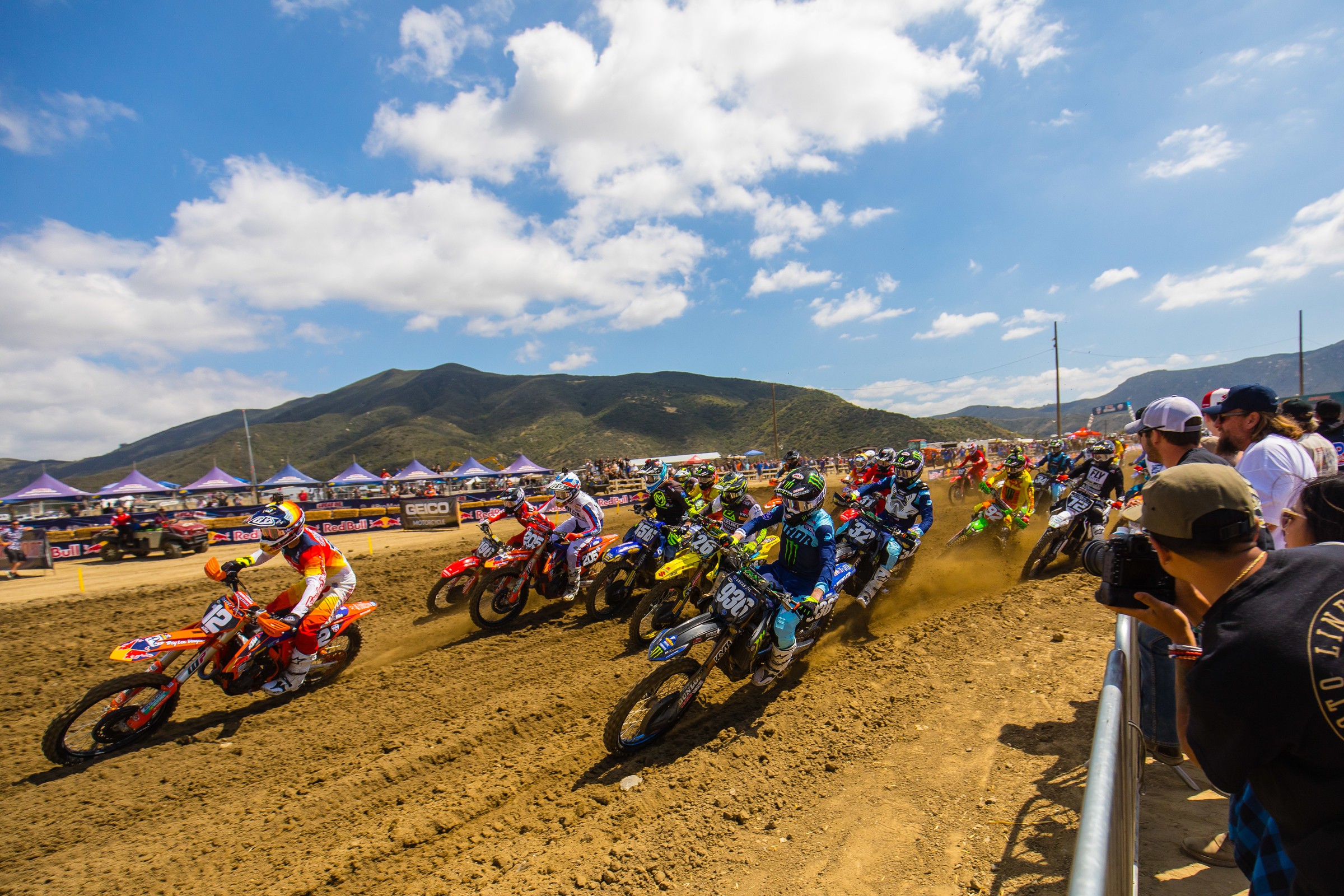 Lakewood, Colorado, is up next for the Lucas Oil AMA Pro Motocross Championship. Thunder Valley Motocross Park lies just outside the Denver metro area and is one of the most popular rounds on the calendar. With mild temperatures, the mountainous backdrop, great spectator viewing, and one of the most convenient venues, this round truly has it all. Locals in the area have been treated to a great moto season thus far, debuting the Denver Supercross less than two months ago and now returning for the third outdoor race of the season.

This track is interesting in that the national has an entirely different look and feel than the rest of the Thunder Valley season. The track’s base dirt is incredibly hard-packed but the Thunder Valley crew bring in countless truckloads of sand to soften up the terrain. On race day, the dirt is mixed in but some sections will be softer than others, with the very top of the track representing more of the native soil. It evolves throughout the day, with mud and ruts in the morning drying into a much less forgiving track by the second moto.

The obvious variation that riders immediately notice is the altitude. Both man and machine suffer at the track’s home 6,000 feet of elevation. I usually got my first taste of it while walking the track on Friday, huffing and puffing a bit more than expected. I also would feel the difference in the qualifying laps, struggling to recover after going into the red each lap. By race time, I didn’t really notice it but there was definitely a toll taken on everyone’s fitness. Lack of oxygen means lack of performance, and not only for riders. The engines are way down on power. I have heard numbers as high as 30 percent reduction and after riding here several years, I wouldn’t doubt it. The first few laps feel like there is something wrong with the engine. It’s making a lot of noise but you’re not really going anywhere. Trying to time jumps is difficult early in qualifying practice. What feels fast enough is not nearly enough. Accelerating at the last minute isn’t nearly as effective if trouble arises. It’s almost like stepping down in engine size. Racing a 450 at Thunder Valley feels like racing a very fast 250 at sea level. Oh, except the bike still handles and turns like a 450. Perfect, right? Many teams will throw the kitchen sink at their 450 engine package for this round where it would be overkill at sea level. Higher compression pistons, more aggressive fuel maps, different cams, bigger rear sprockets, etc, are all commonplace. The teams will do everything possible to replace that lost power because the riders will mention it every time they open their mouths. It’s a drastic difference and the teams that can close the gap to a normal engine output will have a huge advantage come moto time.

Can Dylan Ferrandis get the momentum going his direction?

Is Hunter Lawrence ready to win races or was Pala’s familiarity the difference?

Will the altitude affect Jason Anderson?

How will Joey Savatgy fit in to the fold?

Can Blake Baggett right the ship?

Cooper Webb’s first breakout professional ride was at Thunder Valley in 2013. Will he find his best outdoor form at this same track in 2019?

Eli Tomac went 1-1 at Pala, grabbing the red plates along the way. Things are looking up as he enters his home state of Colorado.

Adam Cianciarulo is two for two, rebounding after the heartbreak that this supercross season was.

Justin Cooper has won half of the 250 motos so far this season.

Marvin Musquin wasn’t able to hold off the advances of rival Eli Tomac but he was certainly much better than round one.

Teammates Zach Osborne and Jason Anderson are both battling inside the top five and riding well.

Jordon Smith is still battling a sore wrist and Pala didn’t help. His 16-DNF was painful for him and his fantasy team owners.

Baggett crashed hard in the first moto, putting him a lap down and nursing a sore wrist.

Jordan Bailey has a pair of 20th overalls to start the season. I am sure he envisioned things going a bit more smoothly but redemption is only days away.

A Yamaha holeshots the 250 motos.

Andrew Short is late for his grand marshal duties after racing a last minute 200-mile off-road race on Saturday morning.

Justin Cooper wins his first overall of his career.