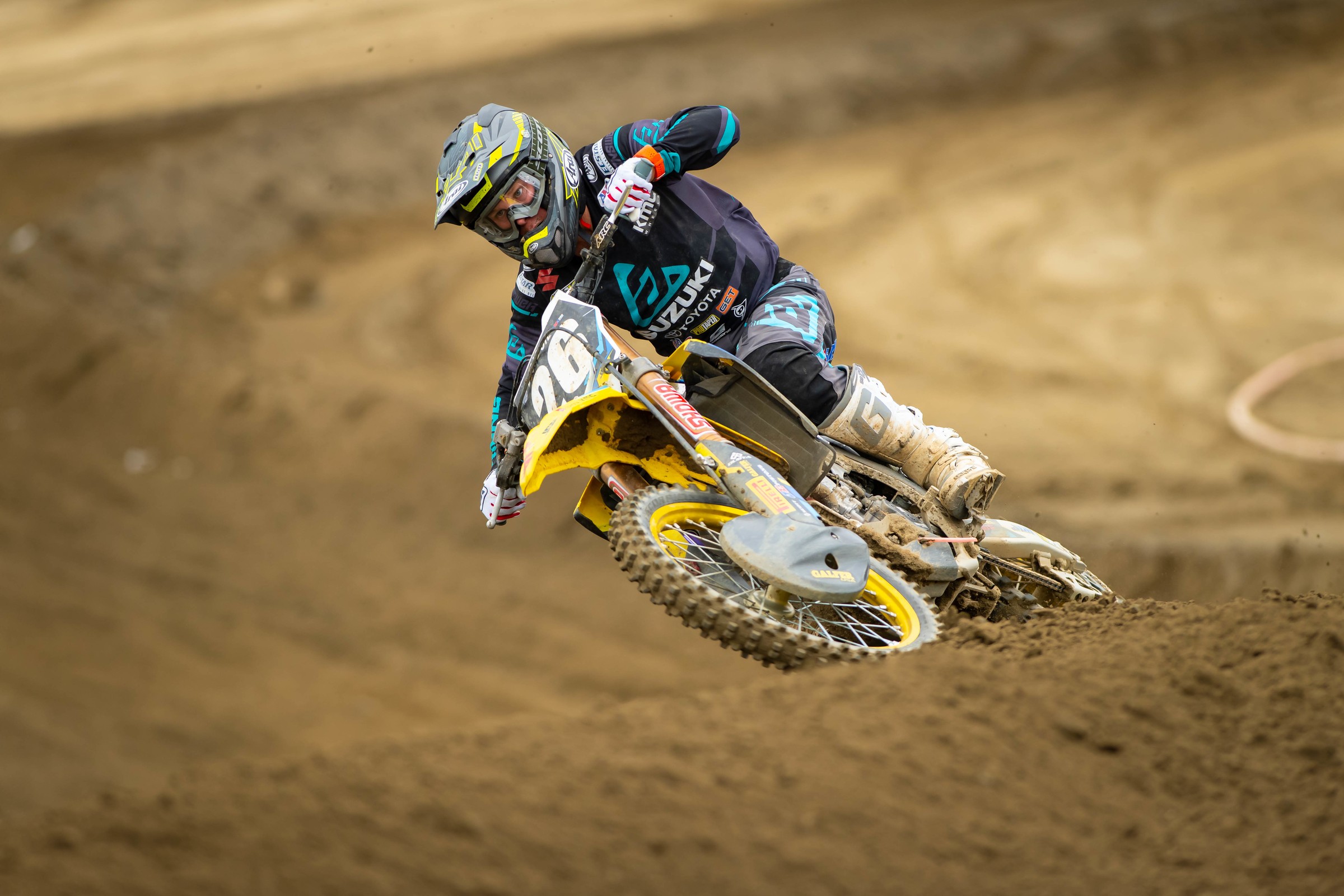 Yesterday’s press conference at Hangtown provided a good chance for an update on some major players for the Lucas Oil AMA Pro Motocross Championship (sans Cooper Webb, who missed his flight but will be at the track for riding today). Perhaps the most important story came from Monster Energy/Pro Circuit Kawasaki’s Adam Cianciarulo, who crashed the 250SX West Region title in Monster Energy AMA Supercross away two weeks ago in Las Vegas. Previously, riders who suffered a heart-breaking end-of-season 250SX loss ended up having sub-par summers, most likely because such a crushing defeat tends to sap motivation.

“I ultimately blew it in the race and crashed,” he said. “I heard a lot of comments that people are stoked that I at least stayed on the track finished the race. I was raised that way, I wouldn’t have quit no matter what, knowing I was going to lose. But really the reason I stayed out there is because I was in disbelief. It’s a tough moment, we put a lot into it and to see it slip away so fast, it almost doesn’t seem real at first. I think I’ve grown a lot over the course of my career, and one of the things that helps me move on is understanding the fact that you can’t change it. It happened. I can lay in my bed all night wishing I could go back and change it, and that’s what kind of puts you through the pain. But honestly, by the Tuesday after the race, I’ve been fine and back on my normal deal. Of course you think about it sometimes and you get bummed, but honestly, we’ve been fine.”

If Cianciarulo’s heart and soul are in fact mended, then the larger question is his overall level of prep. AC missed all of last summer’s Pro Motocross campaign with a torn ACL.

“After supercross this year, I realized I hadn’t done a dirt start since 2017,” he said, explaining that supercross uses metal grate starts instead. “Being on the West Coast, we had that six-week or so break between San Diego and Atlanta, just getting the base work in, not worried about speed, but just doing the long motos and long bike rides because you have the weekends to recover. I feel like my fitness is better than ever and my race craft and all-around ability to make it happen is better than it has been in the past.”

Cianciarulo ended up third in 250MX points in 2017 and did record his lone career overall win at the next-to-last round of that season at Budds Creek. If he can get back to that level and truly push the Las Vegas emotions aside, it portends to a good summer for him.

After spending his supercross season in California, Cianciarulo now moves back to Florida, training at the Moto Sandbox with Ken Roczen, Chase Sexton, and Alex Martin. Much attention goes to the Baker’s Factory group of Marvin Musquin/Jason Anderson/Cooper Webb/Zach Osborne, but keep in mind there’s another four-pack pushing each other all summer. Martin is often forgotten about as a high-stakes 250 player, but he’s finished second in points two of the last three years and was also second in points late in 2017 before suffering a collarbone injury. A-Mart, at least, remembers this.

“I think having been second in the series the last few years I’d like to think I’m the natural choice as the champion, but having said that, it’s Pro Motocross, and nothing comes easy,” said Martin. “It’s going to take a lot of blood, sweat, and tears to get that number-one plate come Indiana. Lots of competition out here. But having said that, this is the first time in a few years I’ve been able to finish supercross healthy and I think having done those extra races helps me with the race intensity. I’d like to think the experience of the last few years will hopefully help me in holding that number-one plate in Indiana.”

Some might scoff at the idea of Martin, once a journeyman privateer, being considered the “natural choice” as champion. Alex, himself, has taken a few years to adjust his own standards.

“It’s been a long road for me,” said Martin. “In 2009, 2010, I would have a different mechanic every weekend, I was hitching rides from the airport to the track. Eleven-10 Mods days, not knowing if my bike was going to show up every weekend. I’ve come along way, even in my mentality. Instead of being happy with a top ten, and knowing that paycheck would help me pay my cell phone bill, now it’s like, I have to win and embrace that fact that you want to beat these guys and not just be happy racing with them.”

Martin says last year he came into the championship working perhaps even too hard, and he fatigued as the summer went on. This year he hopes to maintain better throughout the summer. He also wants to prove that the Suzuki RM-Z250, which has not won a race in this championship in quite some time, is ready to contend again.

“It’s a little chip on my shoulder, really,” he said. “I want to do a good job for Suzuki and the JGR guys and Yoshimura. It’s a good group of people and you want to pay them back.”

There were obvious concerns for Ken Roczen going into this 450 championship, as the HRC Honda rider struggled with fatigue and illness during the second half of Monster Energy AMA Supercross. Considering how grueling the Pro Motocross season can be, that didn’t bode well for Kenny’s chances. He was even worried about missing races at one point.

“At one point it was like that,” said Roczen. “Mid-way through supercross, when I had the problems that I have, I would have lost a lot of money, because I thought [I would have to miss races]. It was ongoing for a long time.

“The antibiotic cycle I was on, it wipes out the good bacteria and bad bacteria. It really messed with me for a long time, but we’re a lot better than we were there for a while in supercross. If that hadn’t happened we’d be in a way different situation right now. But we’re getting better and I’m holding on to that.”

At the very least, Roczen is in a way better position than he was a year ago, coming in after a hand injury with virtually no bike time at all.

“I think physically I’m not in too bad of a spot compared to where I was last year,” he said. “Once you have a decent base it comes back pretty quickly. I’m very confident that week in and week out we’re going to get stronger every weekend. Even this weekend, I’m not coming here being okay just riding around.”