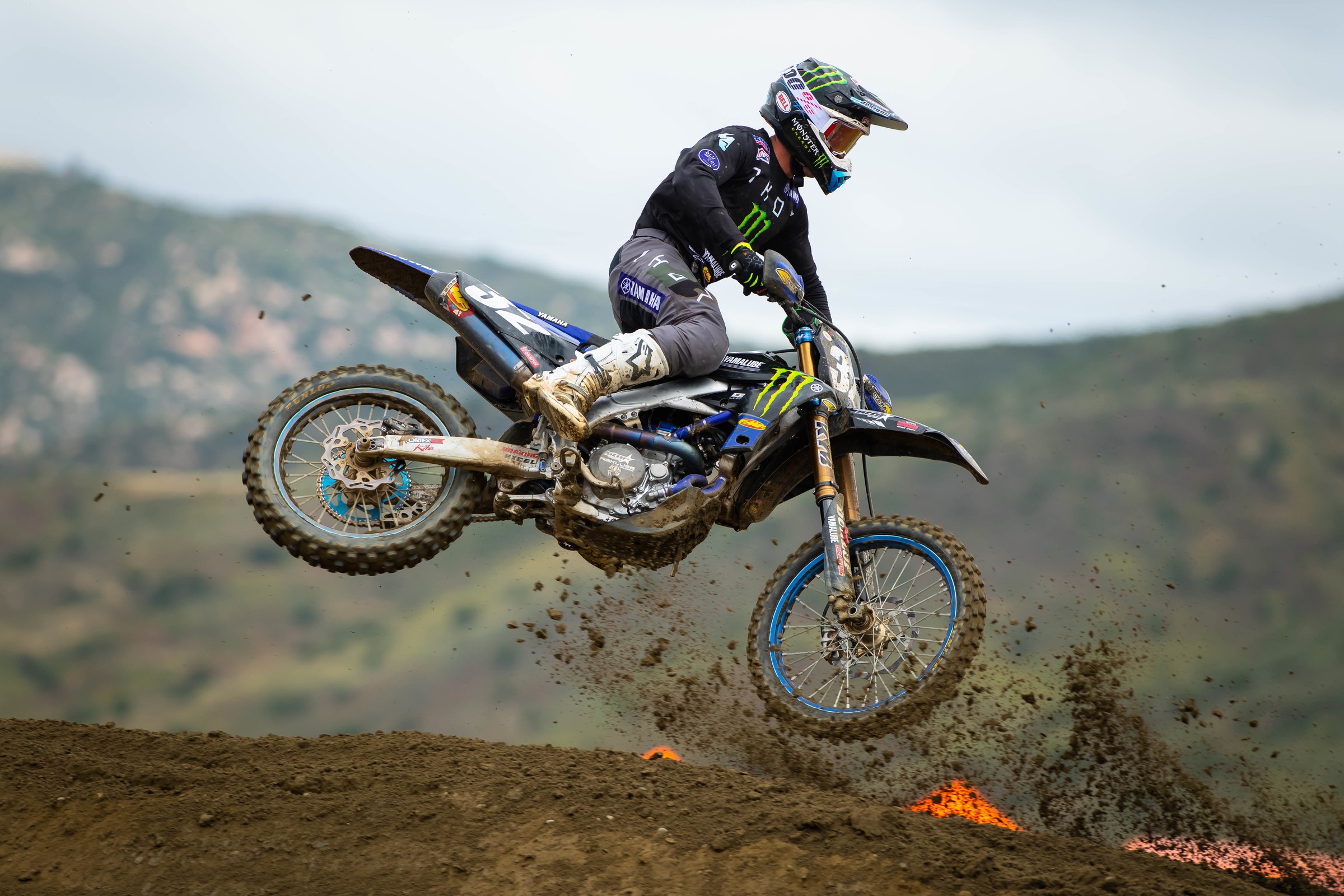 To say Hangtown’s been good to Eli Tomac would be like saying Aldon Baker has had a bit of success in training professional motocross racers. Tomac has been absolutely incredible in Northern California! Including his 250 races, he’s won the overall there four times, hasn’t finished off the podium since 2012, and his worst career finish at Hangtown is fifth. He also won his first ever race there in 2010, and it was the site of the legendary shellacking he dealt out in 2015, which still gets brought up in bench racing conversations today. If you’re making any wagers on the action this weekend, Tomac wouldn’t be a bad choice. –Aaron Hansel

Pro racers are nothing if not tough and determined, and Jason Anderson is the perfect example. After breaking his arm and ribs, lacerating his liver, sustaining a partially collapsed lung, and back injuries during the supercross season, Anderson will make his return to racing at Hangtown. Don’t expect him to take it easy either—Anderson is a champion and doesn’t know the meaning of the word “cruise,” when it comes to racing. It’s tough to predict where he’ll fit in once the gate drops, but it sure will be fun finding out. -Hansel

After breaking his heel earlier this year in supercross, 2018 250 National Champion Aaron Plessinger will kick the season off on the sidelines this weekend. The news isn’t all bad for Monster Energy Factory Yamaha fans, however, as Dean Ferris, a multi-time Australian Champion, will be filling in for Plessinger this weekend. It’s a good pickup for Monster Energy Yamaha—the last time Ferris raced motocross (High Point, 2017), he was second in the first moto and charged his way up to 14th in the second after going down in the second turn. It’s going to be interesting to see where he stacks up this time around. -Hansel

Ferris won’t be the only speedy Australian lining up this weekend in Northern California. After Hunter Lawrence’s supercross debut got put on hold due to a collarbone injury, he’s set to make his debut this Saturday in the 250 Class of the Lucas Oil AMA Pro Motocross Championship. He’s never raced here before so it’s tough to make any predictions, but we do know he’s shown speed overseas—he’s accrued multiple MX2 podiums in MXGP and won his class at the 2017 MXoN in Matterley Basin. We’ll see how the newest GEICO Honda rider fairs when the gate drops at Hangtown. –Hansel

Justin Cooper had an extraordinary rookie season in 2018. The Monster Energy/Yamalube/Star Racing Yamaha rider finished the season third overall, nabbed three overall podiums, and even won a moto at Thunder Valley. He’s also coming off a great supercross season too, in which he was second overall and recorded six podiums. Now that he’s got a season of experience under his belt, how much better might he do in his second attempt? -Hansel

Red Bull KTM’s Cooper Webb hasn’t had much time to celebrate his first-career 450SX title. The turn-around between Monster Energy AMA Supercross and the Lucas Oil AMA Pro Motocross Championship is just two weeks, so Webb had to immediately shift his focus from supercross to motocross. How prepared will he be? If we’re going off recent history, the last three times (Ryan Dungey missed 2017 after retiring; Ryan Villopoto missed 2014 due to injury) a supercross champion has competed in the opening round, they have finished no worse than fourth, with Dungey taking runner-up finishes in 2015 and 2016. “It’s really a motivator, actually, knowing that I achieved a life-long dream,” said Webb on NBC Sports’ NASCAR America: Motorsports Hour. “You want to soak it in, but you really want to keep it going. So for me, it’s been a huge motivator and also, a bit of a weight lifted off now that the championship has ended. The biggest thing is, now that I’ve done it, man, the sky is the limit now.” Can Webb come out swinging this weekend? -Chase Stallo

A major thing to watch in the 250 Class tomorrow is how will Adam Cianciarulo rebound following a heart-breaking title loss in Monster Energy AMA Supercross. “I think I’ve grown a lot over the course of my career, and I think one of the things that kind of helps me move on is understanding the fact that you can’t change it,” Cianciarulo said yesterday in the pre-race press conference. AC has a strong support system around him—including Mitch Payton and Nick Wey—and seems to be ready to rebound outdoors. AC missed all of Pro Motocross in 2018 due to a knee injury but finished third overall in 2017. How will his return outdoors go tomorrow? -Stallo

Is This The Year?

Since 2012, Marvin Musquin has finished no worse than fifth overall in Pro Motocross, and he’s finished runner-up in the last two 450 Class title chases. He claimed three overalls a year ago en route to a runner-up finish to Tomac. Entering 2019, Musquin is on the short-list of title favorites yet again. Will he finally break through? -Stallo

While he’s technically not a rookie, Thomas Covington will make his U.S. Pro Motocross debut this weekend. The Rockstar Energy Husqvarna rider had a disastrous rookie supercross campaign, but he was expected to be much better outdoors, anyway. Making their pro debuts this weekend will be Derek Drake (Troy Lee Desings/Red Bull KTM) and Ty Masterpool (Monster Energy/Yamalube/Star Racing Yamaha). Keep an eye out on these three, as they could surprise. -Stallo

Rain pummeled the track on Thursday, but luckily no rain is expected today and riders will get a chance to ride press day. Unfortunately, more rain is expected sometime tomorrow, but there is a chance we could get lucky and it doesn’t start until the late afternoon/early evening. If the rains do come down, it will favor guys like Justin Barcia, who is a notoriously good mud rider. -Stallo